The Book Signing- From Tea Cakes to Tamales

My friend Nola McKey had a book published this Spring, From Tea Cakes to Tamales: Third-Generation Texas Recipes (Texas A&M University Press) and I am in it! So when she was asked by the Marble Falls Public Library to give a short presentation for their Lunch with an Author series and then sell and sign books, she let me tag along to talk about my adventures in cooking. 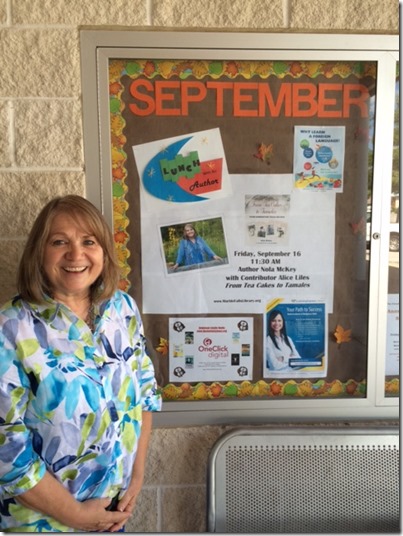 Nola, who worked for many years for Southern Living and Texas Highways, has been collecting recipes for years, probably ten years for this book in particular, with the idea of compiling a cookbook filled with third-generation recipes from Texas cooks. Our great state is blessed with people from diverse ethnic and cultural backgrounds whose family recipes shelter a wealth of history, recipes and history that Nola felt were well worth preserving.

She tells the story of her young son coming home from school one day announcing that he needed to take a traditional family dish to school-the next day, of course!-for a class project. Her Grandma McKey’s tea cakes were the first family-centered dish that came to mind, and as she baked the cookies, memories of days gone by enveloped her as the scent of the cookies conjured up visions of Grandma standing there in the kitchen with her. Thank goodness she had thought to have her grandmother write down that recipe and others before her death, and it was then that the importance of heirloom recipes in preserving family traditions and history gave her the idea for this book.

Now as she collected recipes, she asked for the rest of the story, as Paul Harvey would have put it, that went with the food and the person who cooked it. For the next four years she gathered recipes, family histories, vintage photographs, tested recipes, and fattened up her neighbors with the finished dishes. Contributors were eager to share photographs when they had them, but convincing those contributors to come up with exact procedures and ingredient amounts was another matter. Many of the old recipes were from a cook who never used a written recipe but just did it by heart, and the written recipe they eventually handed down reflected that style. For example, the tea cookie recipe my grandmother painstakingly typed on an index card for me said “enough flour to make rolling consistency.” Right. So over the years I finally came up with three cups of flour making the dough rolling consistency. My other grandmother’s green grape cobbler even I made without a recipe and just dumped a pile of grapes on top of the crust. Nola insisted I do some measuring so I could give her an actual amount rather than just saying “add grapes.” And sugar-I had to actually measure the sugar I put in! Nola was really picky about all that, which, of course, was necessary when someone unfamiliar with the recipe would be trying to make it.

One of the intriguing aspects of the book is the photographs of the original cooks. The stories and pictures make this not just a cookbook but also a Texas history book documenting the life and legacy of the families who shared their stories. It was my Grandmother Drum who handed down the tea cookie recipe, which was handed down to her from the Cornforth side of her family who brought it with them from England when they came to America. Here she is with my grandfather, R.A. Drum. Her name was Carolyn Tate Drum. 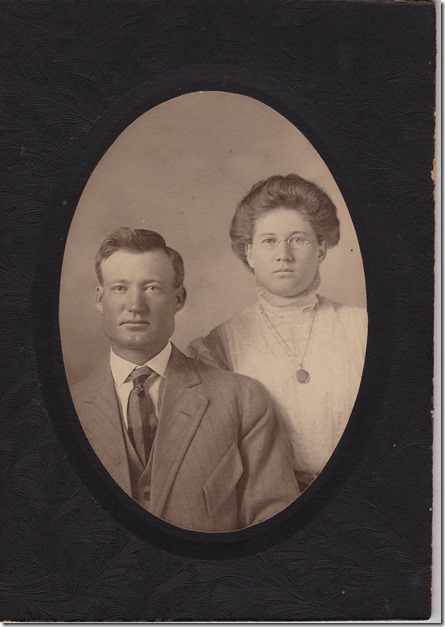 The green grape cobbler recipe in the cookbook came from my daddy’s side of the family. I don’t know as much about the Graves’ family history, other than I think they wound up in Texas by way of Tennessee or thereabouts. They lived a hardscrabble life, at one point homesteading in New Mexico and nearly starving to death, according to Daddy. There was no written recipe for the cobbler; I just watched my mother make it, and she gave me oral directions along with her crust recipe-which is another story in itself also in the cookbook-and then I had to come up with a written version for Nola. This grandmother’s name was Mary Parker Graves; the grandkids called her Mama. Family legend has it that she is kin to Quanah and Cynthia Ann Parker, and evidence says there may be some truth to that.

A crowd of around 50 turned out for the Marble Falls event. Lunch was provided, and we enjoyed sitting and visiting with a group of the audience members before talking about the book. 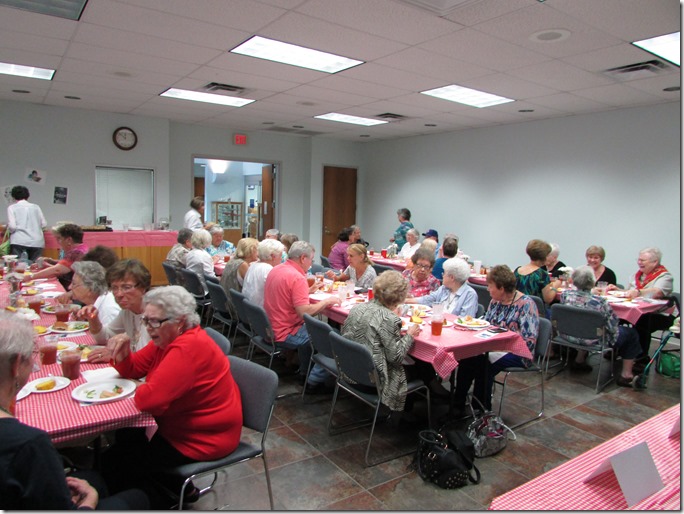 Nola talked about the making of the book and the importance of asking for those heirloom recipes before the cook passes on, something many of us don’t think about until it is too late. She also pointed out the nice side effect of asking for those recipes is the conversations shared and memories and history passed down from generation to generation while recording the recipes. I then shared some of my cooking experiences in relation to my two recipes in the book. We fielded questions from the audience, and they also shared some of their cooking experiences with their heirloom family recipes. For example, would Crisco substitute for suet? 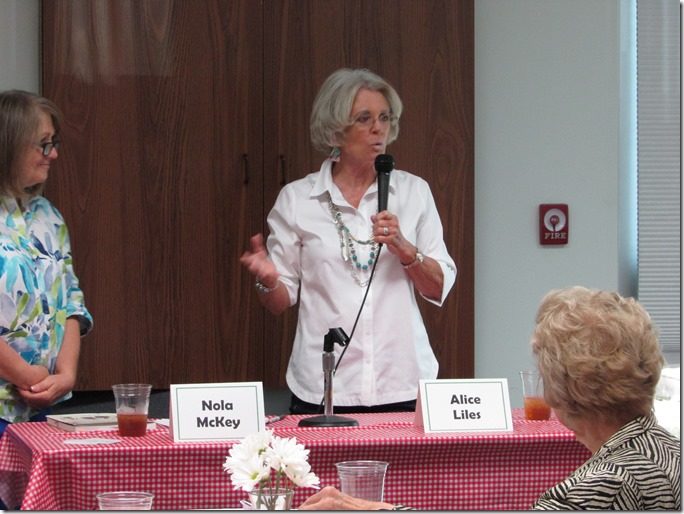 We both enjoyed the day, and I think the audience did, too. Nola even sold and signed a fair number of books. I hope those who bought the book went right home and tried a recipe or two. Or maybe they just settled in and read the family histories, which would also be time well spent.

From Tea Cakes to Tamales:Third-Generation Texas Recipes can be purchased online and in most bookstores and also from Nola’s website, www.nola-mckey.com .

Before Nola’s cookbook, I had written in my blog about the recipes I shared with her for the book. If you are interested, use these links to the blog for a taste of the kinds of stories you’ll find in Nola’s cookbook/history book: