Succulents and their Flowers

Aloes and haworthias are easy to confuse, but not if you look at the flowers. Aloes send up a straight stem, or spire, and have colored flowers at the top of it. Haworthias send out a thin wiry stem with small white flowers that are a totally different shape to aloes. Gasteria flowers are similar to aloes, but the flowers are shaped differently. The flowers of sedums and echeverias are completely different, as are the plants themselves, so they aren’t as hard to identify. So let’s look at some examples.

This Aloe jucunda, native to Somalia, is a small aloe with these pretty shiny leaves that I like. 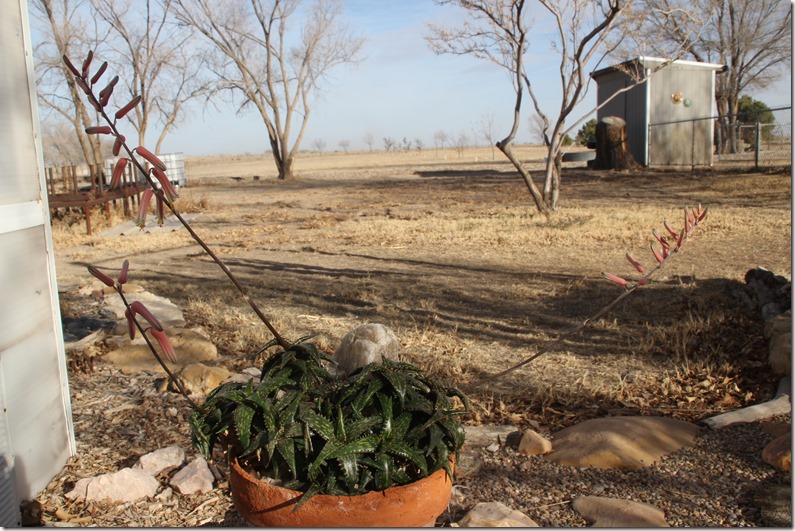 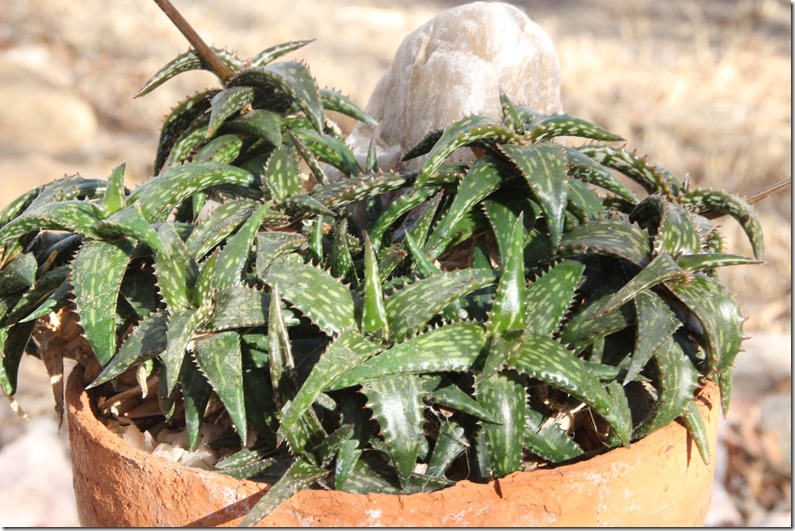 Here are its flowers. The flower stem, or spire, is leaning a bit, but notice it is straight, and especially in the larger varieties they stand straight up. a characteristic of an aloe inflorescence. Cactus flowers are a single bloom; when the flowers are small and arranged on a stem like this,  I learned it is considered an inflorescence. Also  notice that these flowers tend to open at the end of the bloom. 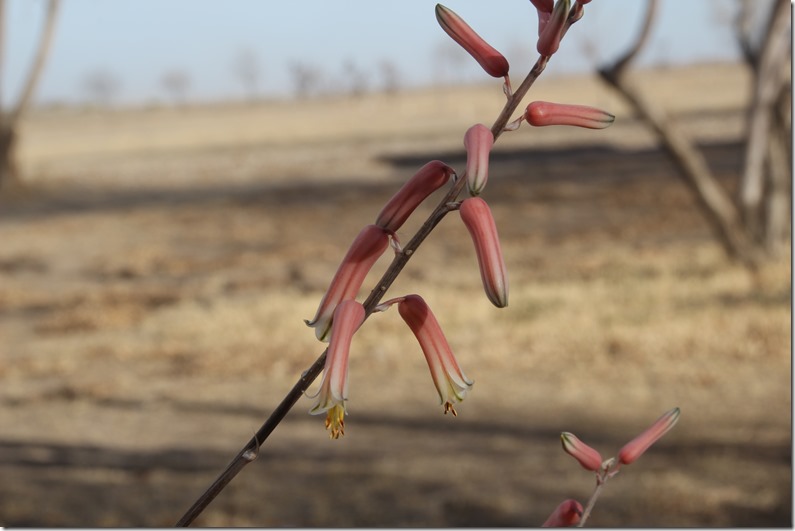 Gasterias and aloes might be confused, but the leaves on gasterias are thicker than most aloes and tend to grow in stacks, one on top of the other, and they don’t form a rosette like an aloe. Some form a messy rosette, and the flowers may be slightly different, but I’ll admit it; I’m not an expert on them all! This is a Gasteria Batesiana. 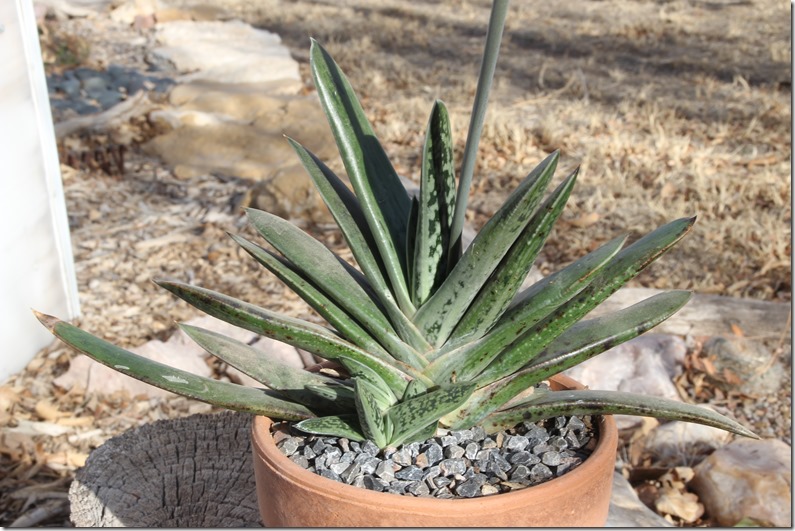 Look at the straight stem and the beginning branches that will make flowers around the stem. Then when they grow, they tend to lean over and the flowers all hang down from the stem. 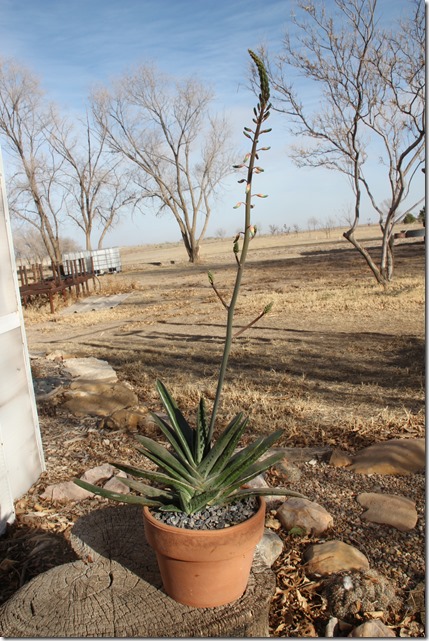 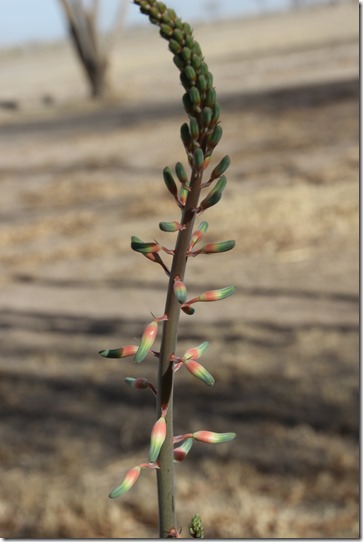 Here’s another example of a gasteria. 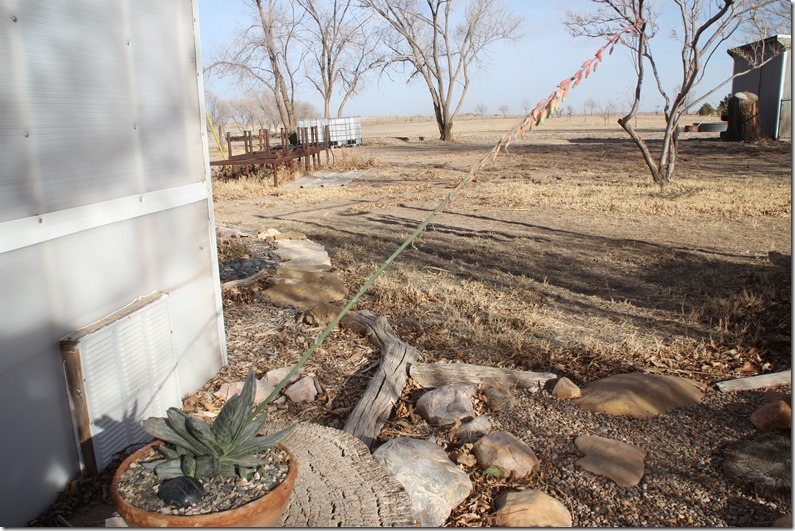 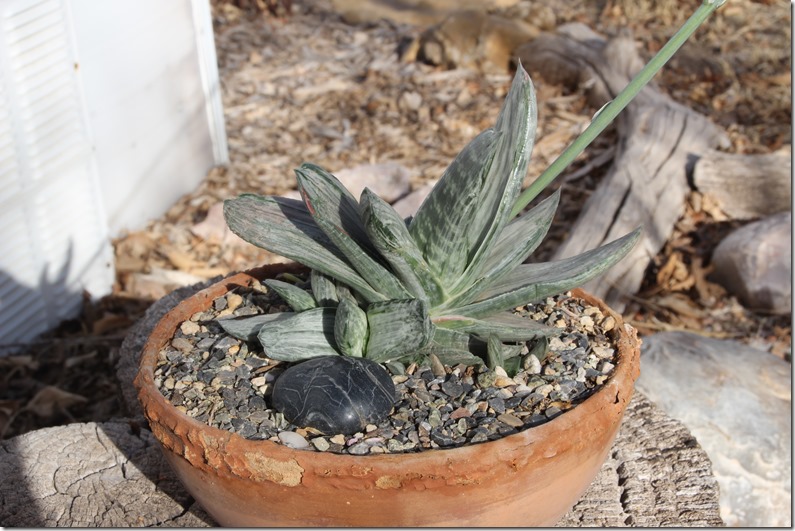 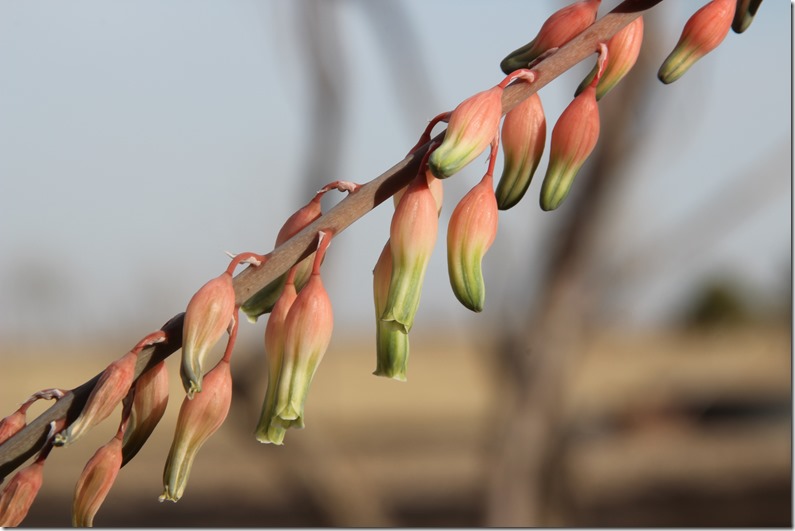 One more comparison: this is an aloe flower. 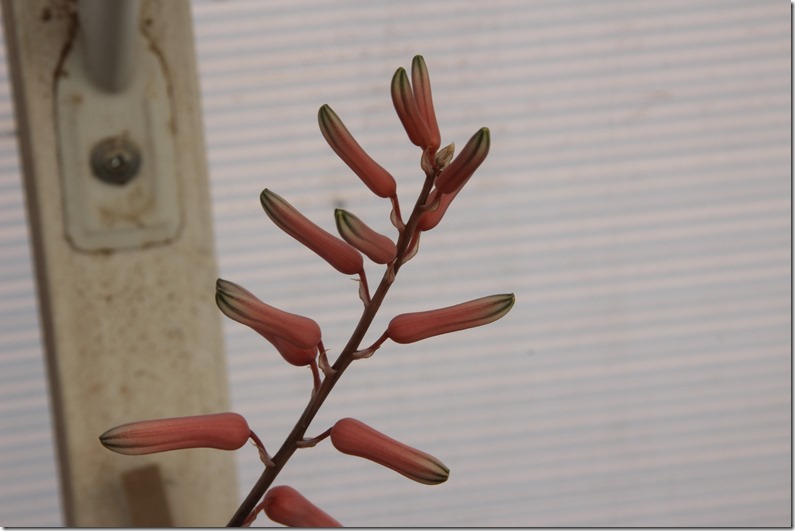 And this is a gasteria flower: 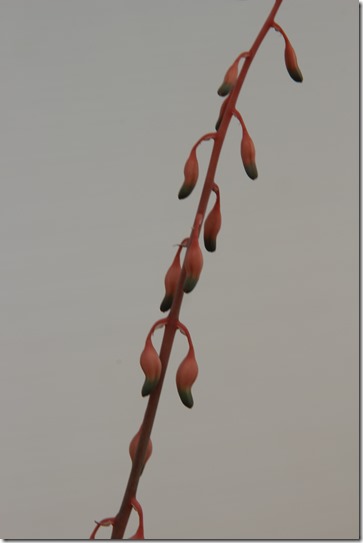 Gasteraloe green ice is a hybrid cross between a gasteria and an aloe, so the flowers on this one are a bit of a cross, too. 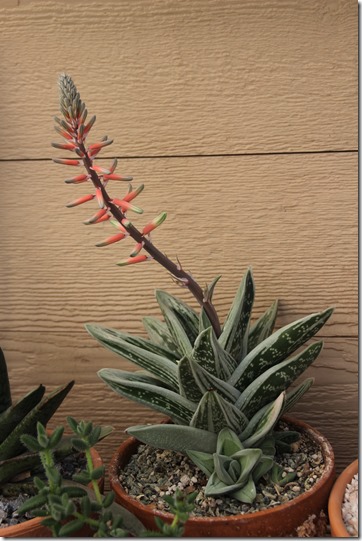 These flowers are similar to the aloe part of the hybrid, but the plant is built differently. Notice how the flowers are arranged all around the bloom stem, which is what aloe flowers do on their inflorescence. 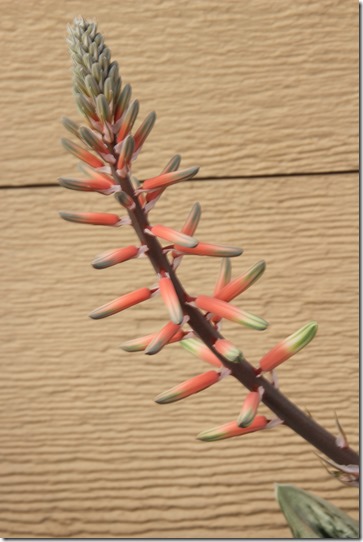 Some haworthia species are easy to mistake for aloes, but the flowers are a dead give-away. This is a Haworthia cuspitada. 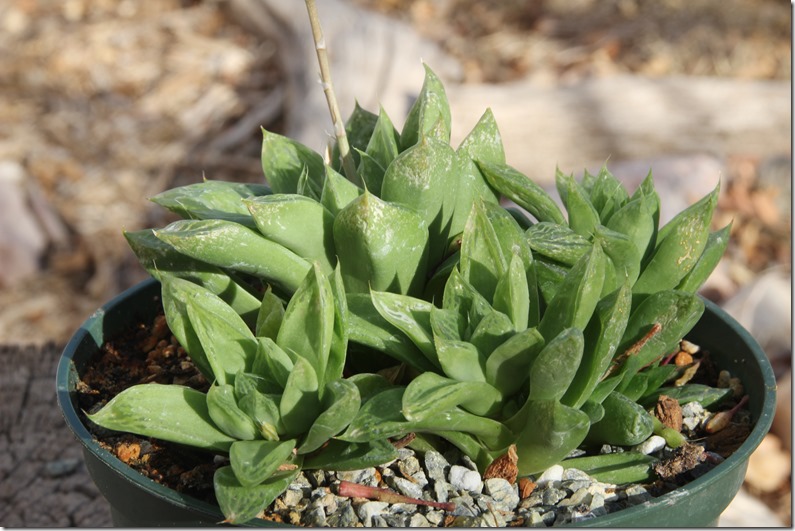 The flowers are these little white things on a thin wiry stem, 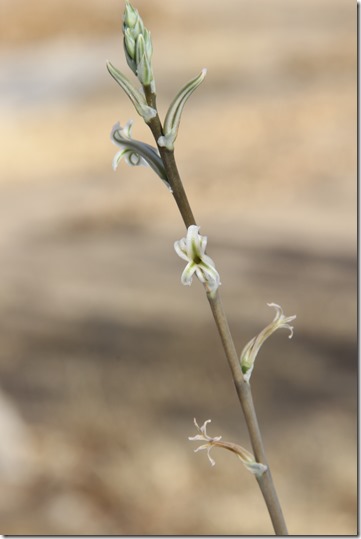 This Haworthia truncata plant has a very different look. But look at those wiry flower stems just wandering all over the place! 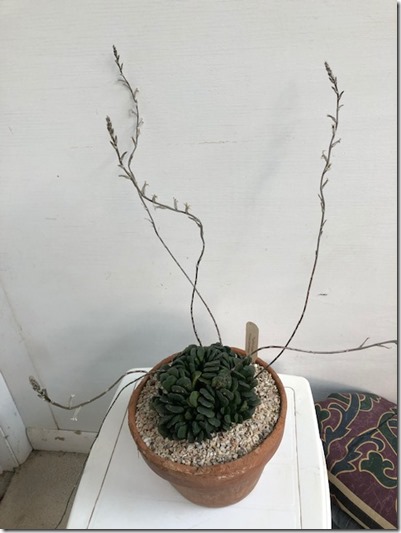 But the flowers are just the same as the other example. 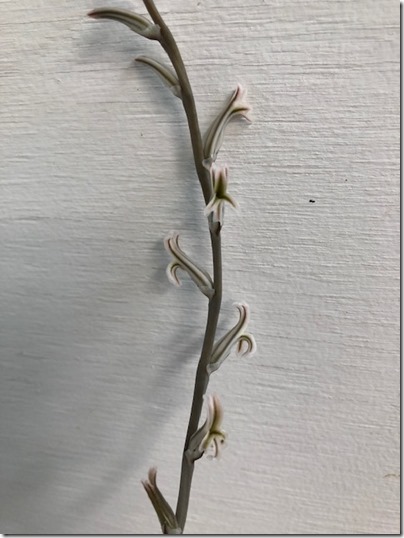 Echeverias are a bit easier to identify because their leaves usually make an obvious rosette shape, and their flowers are noticeably different. 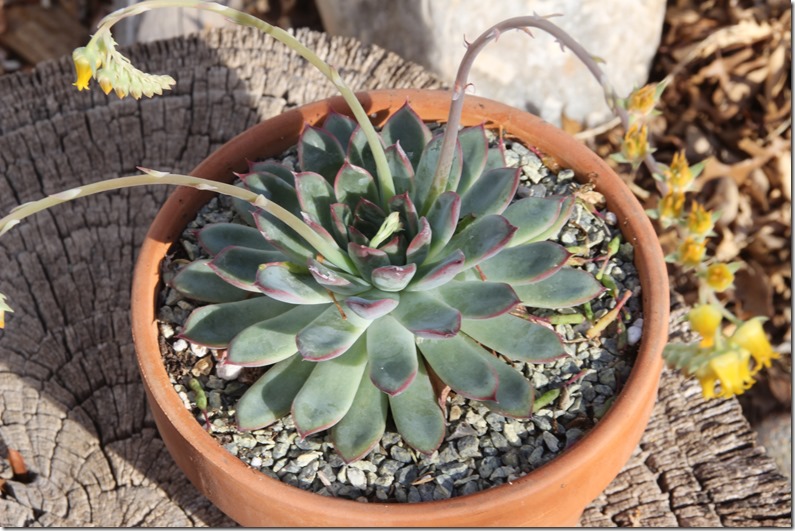 Echeveria flowers are always on a stem that gracefully bends down under the weight of the cluster of flowers, always shaped more or less like these. And the flowers are noticeably different. 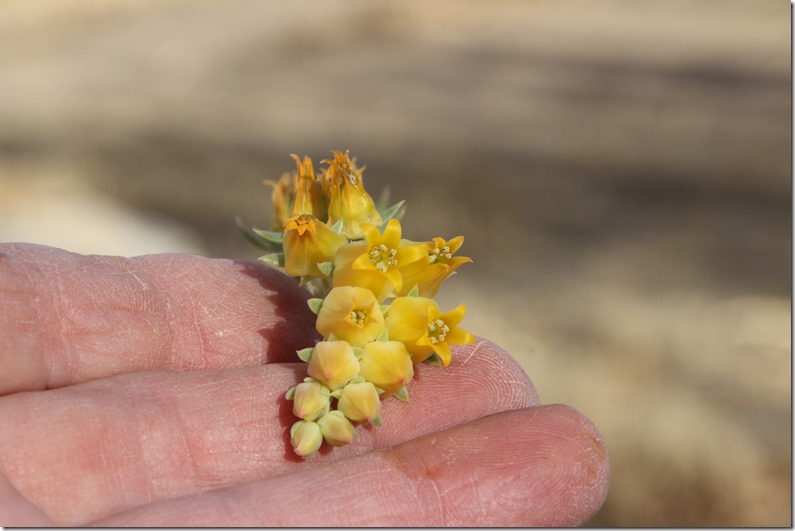 Sedums are a huge group of plants, and they may not all have the same kind of flowers, but the ones I have are all similar, making a nice cluster of little flowers. The grayish blue plant is a Sedum treleasei; the red-rimmed green one is Sedum adolphii Firestorm. 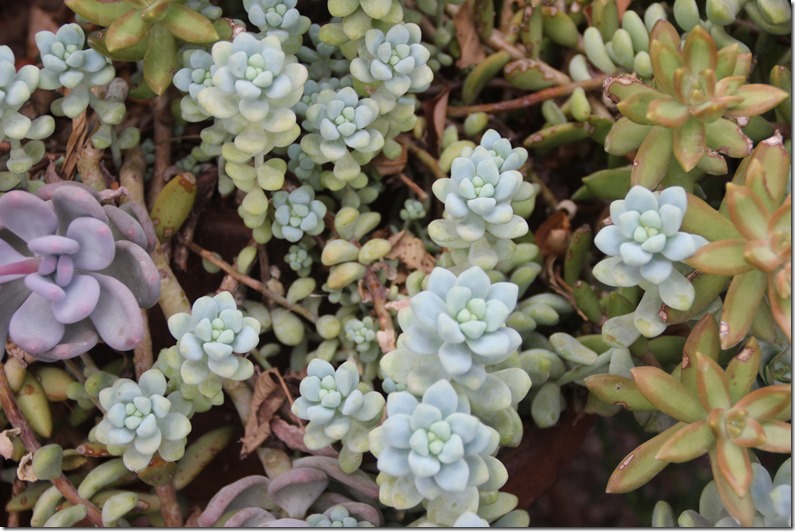 The Sedum treleasei  flowers are yellow. 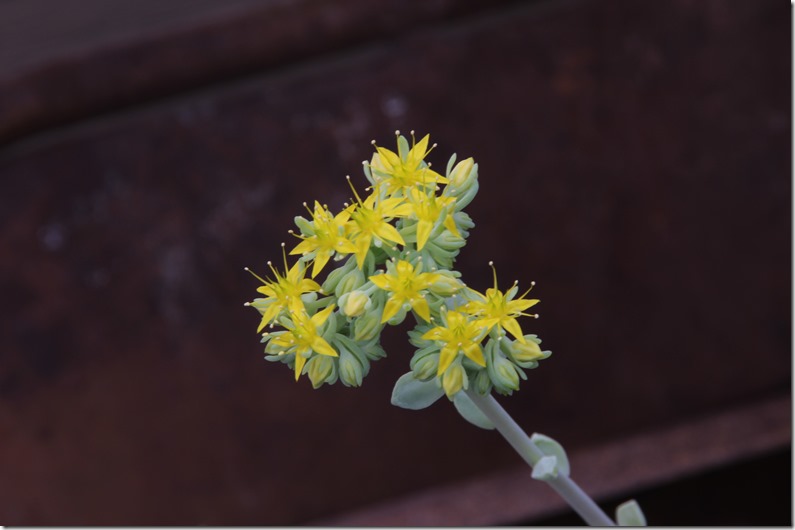 The Sedum adolphii Firestorm flowers are white. But look at the flowers: except for color, they are the same.

I am sure there are exceptions to some of these examples that you may come across, and I am still learning, so this is just a guide to help you get started if you want to identify your plants.

But in the meantime, just enjoy the flowers!