Tales From The Kitchen: Learning to Make Pie Crust

Following recipes accurately was one problem in my early cooking days (see “Tales From the Kitchen: The Giant Cake,” January 31, 2013); incomplete recipes were quite another matter.

Besides the cook books I received as wedding gifts, most of the recipes I tried to use were from Mother; many of hers were from her mother. Makes sense, right? So I had the pie crust recipe that had been handed down to her by Grandmother, and they both made lovely pies and cobblers with this wonderful crust. I also had the family chocolate meringue pie recipe, so I set out to make those for my new husband.

The filling was wonderful, and I could even manage nice meringue. The crust was another story. I could barely get it to roll out and then move it into the pie pan. But I would come up with a pretty pie, and Bill would dutifully eat the filling and the meringue and leave the crust.

This went on for a few pies, and I finally thought to ask Mother what I was doing wrong. I had the recipe card in hand, and we went over the ingredients. Crisco, 3/4 cup? Yes. Half a teaspoon of salt? Yes. One and a half cups flour? Yep. Half cup of water? Umm, no. Seems I left out that one little detail…

Now my pies turn out very edible, thank you very much, and I am something of a snob when it comes to pie crust. I look down my nose with disdain at so-called homemade pies that, upon tasting, are obviously not completely homemade because the crust tastes ready-made. And there definitely is a notable difference. Or its perfectly-formed, mass-produced shape gives it away as well. I don’t get it; the real thing tastes so much better, and it really isn’t that hard (now that I know what I am doing!) to make from scratch, I just can’t imagine why anyone wouldn’t do it themselves. The funny thing is, since then, I have tried other crust recipes, and they never turn out as well. Go figure. 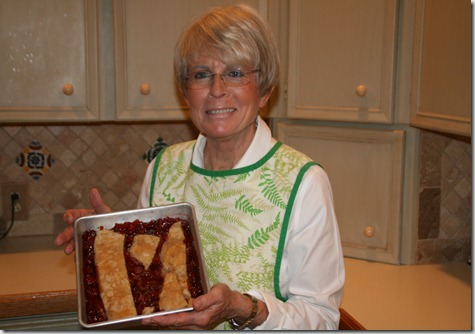 This is not one of my prettiest cobblers-for that let me refer you to “Green Grapes,” July 21, 2010-but it is one I had just made and which made it handy for a picture. When I want to do my best Martha Stewart imitation, I cut out shapes in the crust with cookie cutters. You might notice I am wearing my apron, also a product of my mother. She always wore an apron when she cooked. Many years ago she made this and two other aprons that I always use. The tradition continues and her cooking legacy lives on.