A Cautionary Tale about Assuming

My friend Nola is compiling a cookbook of third-generation recipes of Texas cooks, From Tea Cakes to Tamales, Third-Generation Texas Recipes; Texas A&M University Press. I contributed two recipes, my Grandmother Drum’s tea cookies and my Grandmother Graves’ green grape cobbler. In the course of getting all the details right for the cobbler story last week, that pesky pie crust recipe came up again (“Tales From The Kitchen: Learning to Make Pie Crust,” February 6, 2013). I tended to give Nola pretty vague details about the recipes. assuming that some of the details, like measurements of sugar and grapes would just be obvious, I guess.

You know, after making this cobbler for years without a recipe, it just seemed natural to know how much sugar to use, what the right amount of grapes looked like, how thick to roll out the crust. Nola wasn’t buying it. She just got real picky and kept asking for specifics. We finally came to terms with all the details for the cookbook, and then at Thanksgiving when we went to AJ’s house for Thanksgiving (“Trip to the Christmas Tree Farm,” December 4, 2014”), I realized that I might have been guilty of assuming, which, as a teacher, I had often been warned about. You shouldn’t assume because it makes an ass of “u” and me… and poor AJ suffered the consequences. 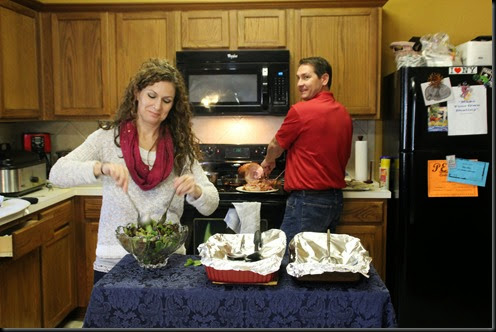 Holiday tradition in this family dictates that the desserts of choice at Thanksgiving and Christmas will be chocolate meringue pie and  lemon meringue pie. So AJ, being the good son that he is, who had asked for my pie recipes after he and Erin married, had the two pies made and ready to eat when we arrived for the holiday. Beautiful they were, but when we cut into them, the crust was thick and tough. As Bill did what he did when I was killing pie crust in the early days, which was to eat the filling and meringue and toss the crust, he quietly asked me between bites if this was my crust recipe. AJ heard him and chimed in that it was and asked what had he done wrong? I couldn’t find anything wrong as he took me through his preparation, so it was decided that since the pies had been effectively eviscerated of their fillings, we needed more pies, which I would make the next day while AJ watched.

The new day dawned, the trip was taken to the grocery store for a resupply of ingredients, and the pie replication began. As I was rolling out half of the dough, AJ asked me what the other half in the mixing bowl was for. For the other pie, I told him. “The other pie?” he repeated. “The recipe doesn’t say anything about two pies.”

Now, I don’t know if I just forgot to add that critical piece of information to the recipe, or if my trusting son was a classic victim of the consequences of my dastardly assumption that he would just know to make two crusts out of one recipe! And the rest of the story is that if we had just talked the recipe to death and not gone through the actual process together, we still might not have solved the mystery of the super thick crust.

So there you have it: don’t assume unless you want to make an ass of u and me.

But sometimes it also will get you two more pies.