AJ and I Build a New Cactus Garden

My son AJ asked me to help him design and plant a cactus and succulent garden requested by a customer of his Green Dude Organic Lawn Care business in Kyle, Texas. I had helped him with a similar garden in 2017 (A Succulent Garden for Kelly, May 17, 2017) so of course, I jumped at the chance to have the fun of landscaping a new cactus garden for someone else since I have just about all the cactus garden I can take care of!

He had also asked me to provide the plants for this project, so off I went, sharp shooter in hand, to my cactus garden to dig up specimens she had selected from the photos I sent her of what I had available. The large Echinocereus coccineus, hedgehog,  was already making buds, the Echinocactus texensis, horse crippler, had tiny new growth spines emerging, the Euphorbia myrsinites, gopher plant,  was in full yellow bloom, the Delosperma cooperii, ice plant, was putting on new growth, the Yucca recurvifolia, soft-leaf yucca, the Agave neomexicana, New Mexico agave, and Agave harvardiana, showed no signs of frost damage from this last winter from Hell; all were ready to start a new life in Angela’s raised bed.

Angela’s bed had an established Hesperaloe parviflora, red yucca, in the corner, which we left in place,  and two large iron caldrons she said her grandmother, or was it her mother?-probably both-had made soap in that we use as hardscape pieces in the garden. 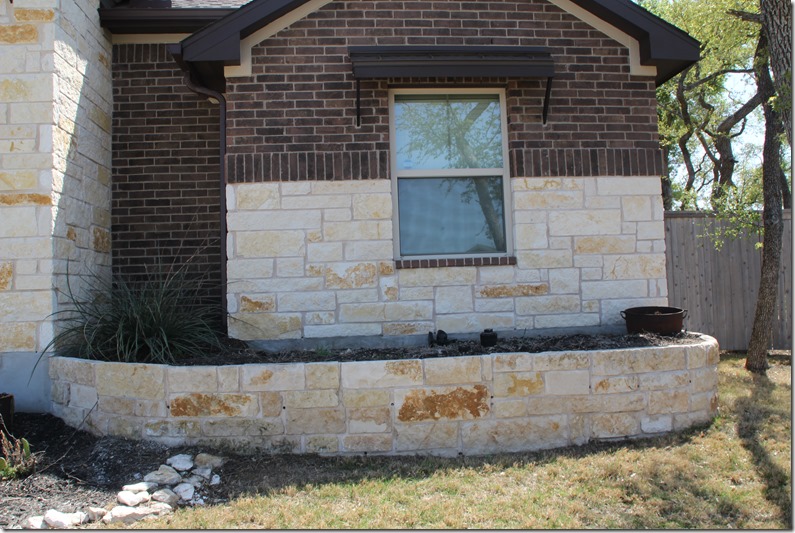 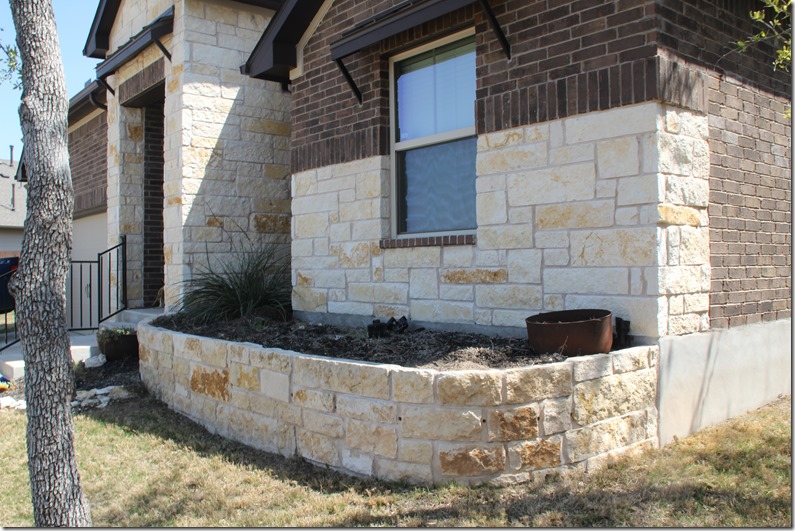 So we got to work amending the soil and deciding where everything would go. AJ did the heavy work moving plants around as I played with the design and rearranged things more than once. We were so busy getting things done, no one thought take pictures during the process. Plants were planted, caldrons were positioned and planted in, an overlay of thick newspaper sections went down instead of landscape cloth to keep down weeds, hold in moisture, keep the dirt in place, and keep the pea gravel that went on top of the paper from just working its way down into the soil. Gravel, pea size or larger, (decomposed granite also works,)  is my preferred top dressing for a bed like this because it a natural compliment to cactus, and it just looks nice; hence the term top dressing.

And after three hours, this was the finished look: 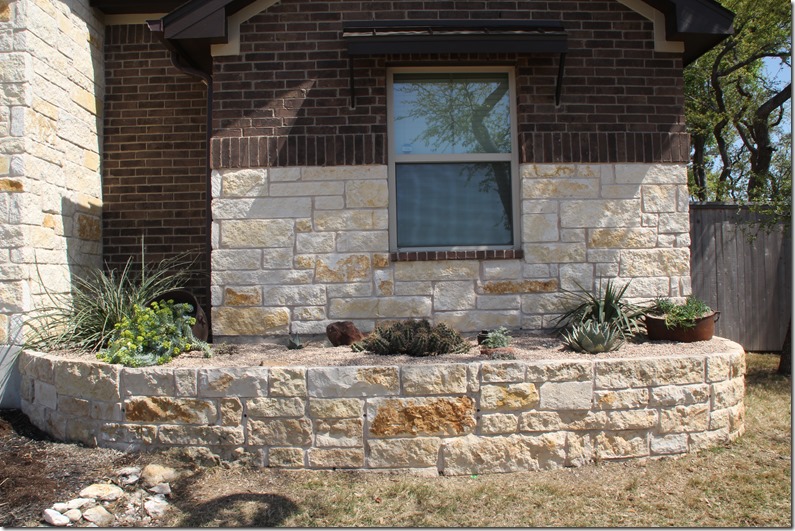 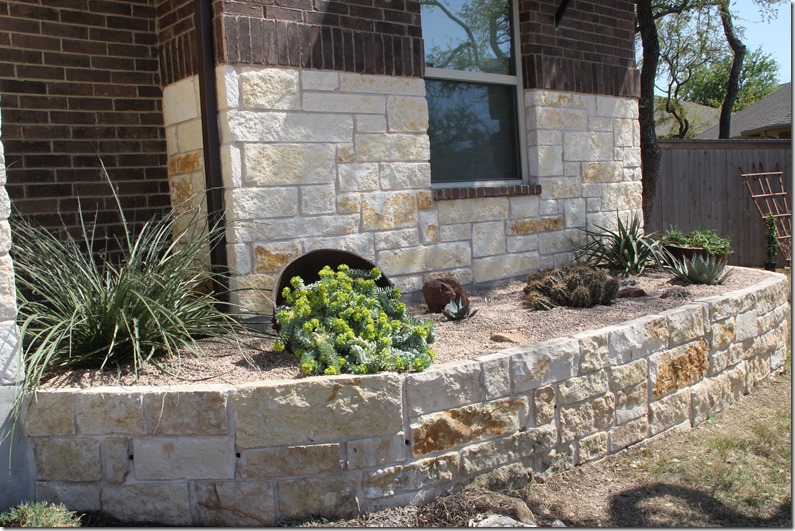 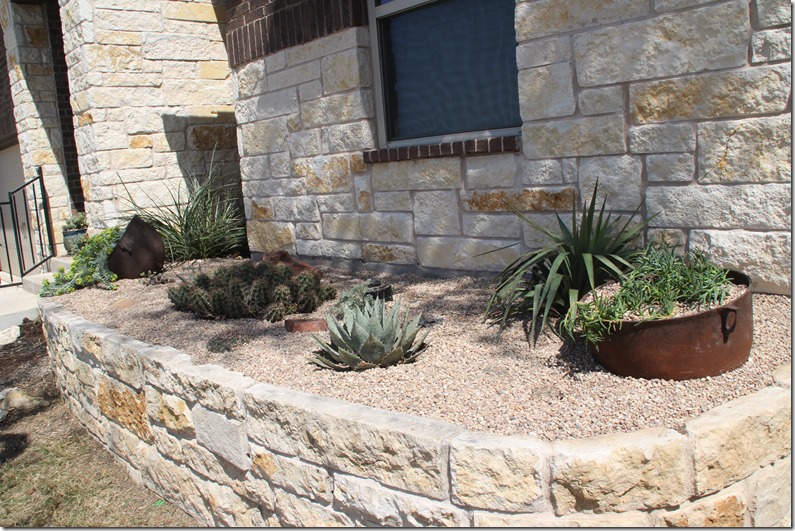 Three small E. texesis, one Echinocereus reichenbachii, one Artemisia Powess Castle to camouflage the water system hardware,  one very small sedum Autumn Joy, and two other starts of sedum were also planted, but they don’t show up in the picture. We added three rocks, and the job was done. In a week or so, maybe two, this hedgehog will be covered in bright orange waxy blooms, and blooms on the ice plants and E. texensis will follow. At some point, Angela will also have red yucca blooms and soft yucca blooms. And years from now the agaves will send up a bloom mast. 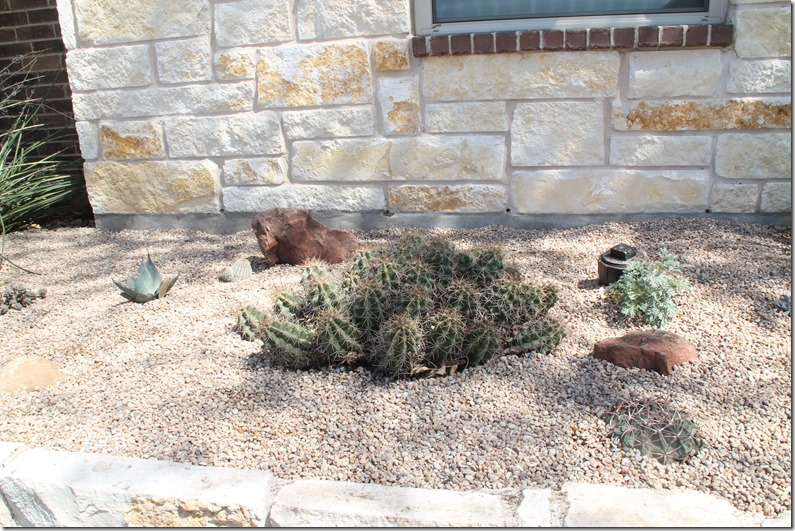 She has much to look forward to as the plants grow and bloom. What a deal! 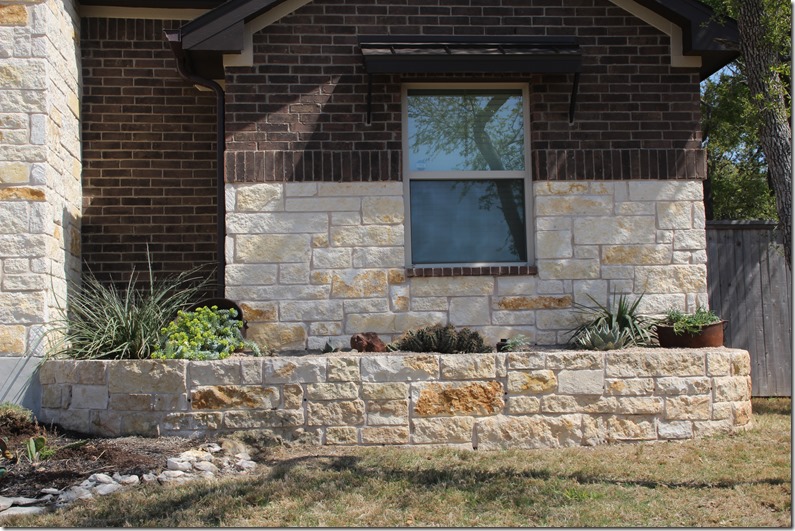