Last September when I was visiting Woody and Kathy Minnich in Edgewood, New Mexico, their neighbor across the way shared a start of catmint with me. Blue mounds of the flowering plant were dotted here and there in the neighbor’s cactus garden and really added a nice touch, so naturally I wanted some for my garden.

I brought the little starter-size plant home and found it a nice spot under the pear trees, watered it, and waited patiently for it to grow. I even protected it from our freeze spells to make sure it had a chance to get a root system going for next year when I wouldn’t need to protect it. It made it through the winter and sprouted a small batch of nice green leaves this spring.

But I kept finding it all mashed down and broken when I would go to water it. I would rebuild the well of soil around it, water it, and hope for the best. It would spring back up, putting on new green leaves, and I was encouraged it would make it.

But this kept on happening. And then it finally dawned on me. This is catmint, for heaven’s sake, and I have four cats! I looked it up to see if catnip and catmint are the same thing. They are not, apparently, as catnip is said to have white flowers and this plant has blue, but some cats can be attracted to both plants, falling under the spell of whatever psychedelic scent the plant gives off  that hooks them.

So I dug into the rusty things I have for decorating the garden and came up with a combination of plow shears and pitchfork tines, along with a few rocks, to try to protect the plant from the cats. I watered and waited and it came back again. But when I would water it, the plow shears would be all askew, and it was obvious someone was still trying to enjoy the plant. I would reset the protection, water, and the process would start over. But I never could catch any of the cats attacking the plant. 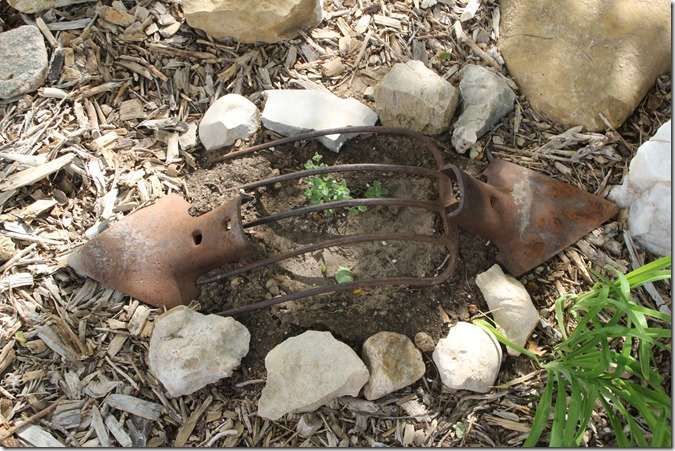 And then finally one day Frosty came out to help me weed, I thought, but he headed straight for the catmint, and Bam! I caught him in the act, very determined to rub up against the leaves. 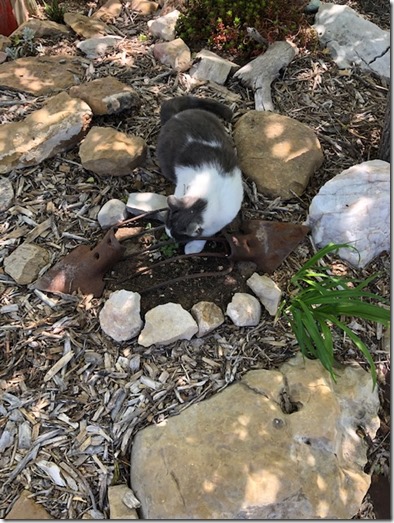 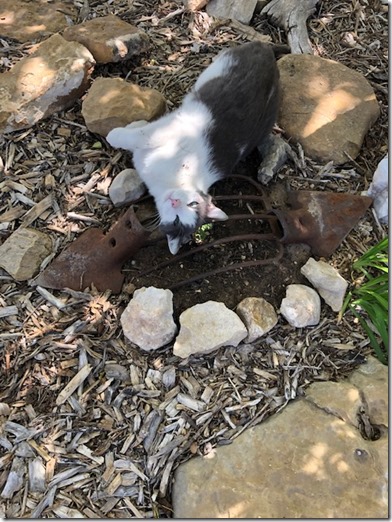 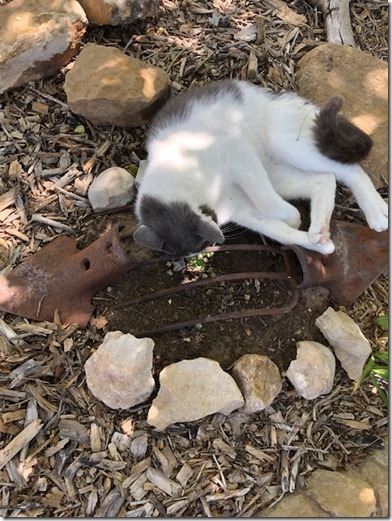 Here’s a mug shot and description of the perpetrator: twelve pounds, four white legs, blanket of gray over the back, tail, ears and top of head. But the identifying detail is the black eye-liner, a dead give-away. 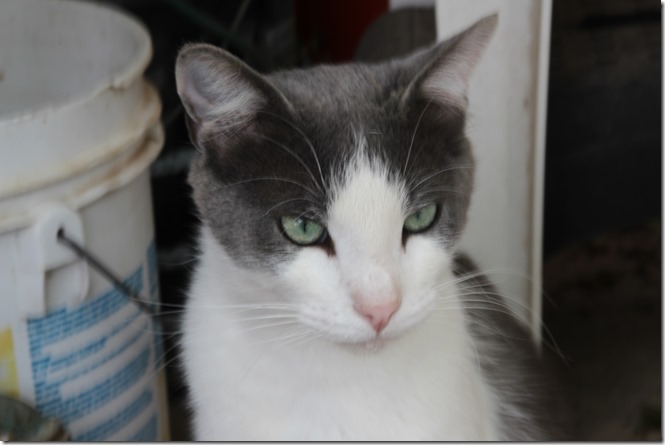 I have no idea the future of this little plant. The cat is not going away, nor is his habit of attacking the catmint. And for all I know, Siam, Wendy, and Minnie are guilty, too. I just haven’t been able to catch them in the act yet. So I will keep resetting the protection contraption, water the plant, and see what happens. I may or may not ever get it to the point of making those pretty blue flowers, and it just may be that my garden is destined not to have catmint.

Be on the look-out if you have catmint. Frosty is not armed and dangerous, but he will wreak havoc on your plant.

Your cat may, too.