Today is Good Friday, my daddy’s marker that it was time to plant his garden. Well, of course, in Rosenberg on the Gulf Coast of Texas, by Good Friday that part of the world had already had about a month of spring weather. Good Friday just pretty much cinched the deal that there would not be a surprise freeze that late in the year, considering that down there it only snows about every ten years; late freezes are just as rare.

Up here it is much colder for much longer, and it is tricky putting out many of my succulents and tender cactus too soon, especially since they have been protected all winter and would be shocked by the cold weather.  I look to my Cylindropuntia imbricata, the cane cholla, for hints that spring really is here, or at least on the way. I took this picture on January 29th this year, which shows just how sad and droopy it gets every winter. The yellow things you see hanging on the limp arms of the plant are what’s left of last year’s blooms, the fruit of the cactus that contains its seeds. Cholla and prickly pear cactus are both in the opuntia family, and on prickly pear this fruit would be called a tuna and would be much prettier. I have a hard time calling these tunas, but so far I have not found what else they might be called, other than fruits. My prickly pears, by the way, do the same droopy thing and look pitiful all winter and then  pick right up as the weather warms up. The cholla is just so much more obvious that I only took its picture to share with  you. 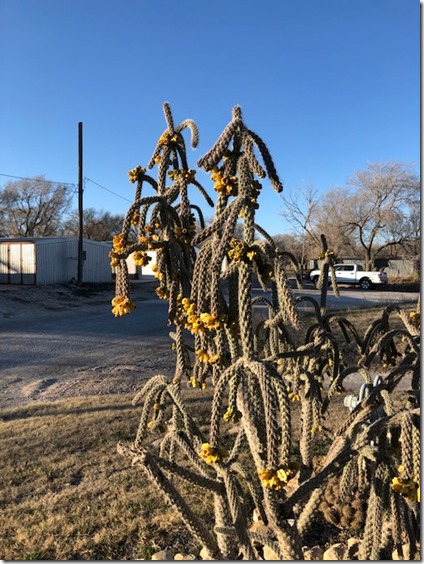 Now, I took this picture today, Good Friday. Same plant, but it has been warm here the last couple of weeks, and look how it has perked up! 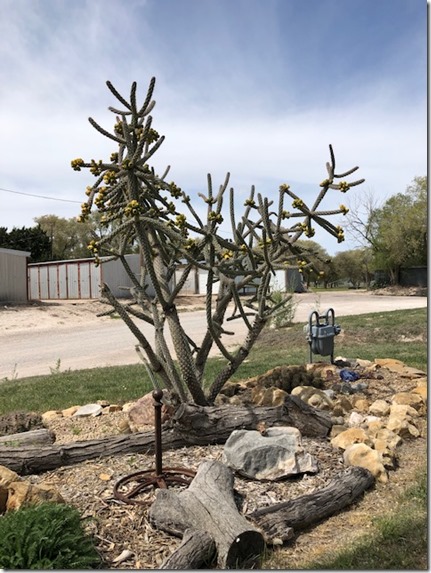 It may be Good Friday, but the weather app on my phone says it is going to reasonable on Saturday, tomorrow, but then by the time Easter Sunday is over, we will have cold wind and a low of 26. And then Monday a low of 24, Tuesday a low of 24 and snow! It will even stay cold and close to freezing Wednesday. Good grief!

Thursday we still might have a light freeze, but then after that surely the freezes will be over. Even though we have this last cold spell to deal with, my bluebonnets are beginning to bloom and some of the other cactus are making buds and the hedgehogs are even on the verge of blooming. I’ll share them with you soon. But the cholla is telling me that yes, spring is just around the corner. Look closely and you can see the purple beginnings of buds coming out, snow or no snow. 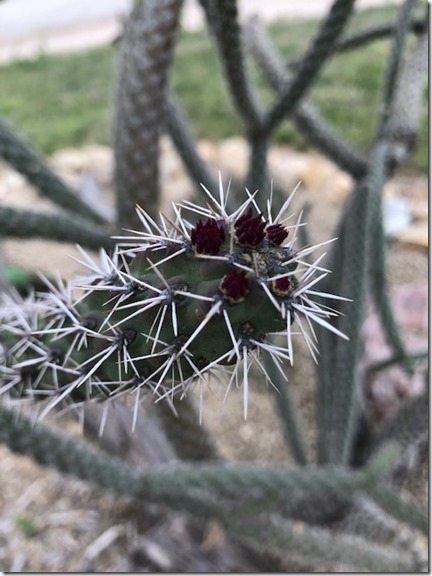 So later this summer when these little buds become beautiful purple flowers, I’ll share that with you, too.