Death Comes to the Agave

One of my very favorite, dependable, beautiful, low-maintenance plants, agave harvardiana, shared its spectacular blooming mast with me and the neighborhood this summer. Alas, as is the nature of the plant, after it put its heart and soul into this bloom, it begins to die. So rather than watching it die ingloriously, I allowed it to be cut down while everything was still in tact so its hard work could enjoy another life as decoration at Trinity Church.

This is the 30 year-old agave harvardiana, purchased as a young gallon container-sized plant at a nursery in El Paso around 1989. Native to the Big Bend area, this agave is easy to grow and really makes a statement wherever it is planted. This variety, like most agaves, is monocarpic, meaning the plant dies after it blooms once in its lifetime. And no, cutting off the emerging bloom mast will not save the plant. Mother Nature is sometimes a harsh master. 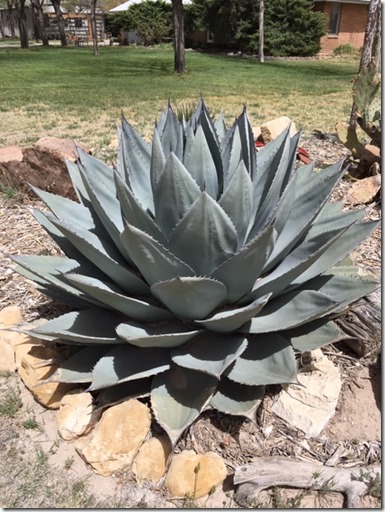 One of the prettiest, most cold-hardy, low-maintenance agaves, I enjoyed watching it grow. As each frond of the plant unfurls, the imprint of the previous one leaves interesting designs. 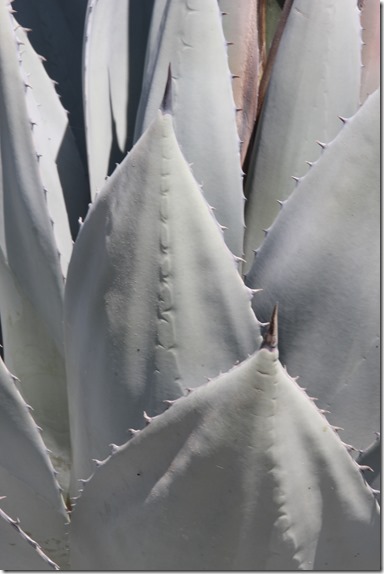 On May 3rd I saw what I knew to be the signs of the end of its life; a bloom mast was forming in the middle of the rosette. It’s a subtle difference, easily overlooked unless you have seen it before. The tips of the leaves in the center of the rosette are much closer together, the leaves themselves narrower than normal. And then a week later, the tip begins to emerge, and there is no doubt: the blooming cycle has started. 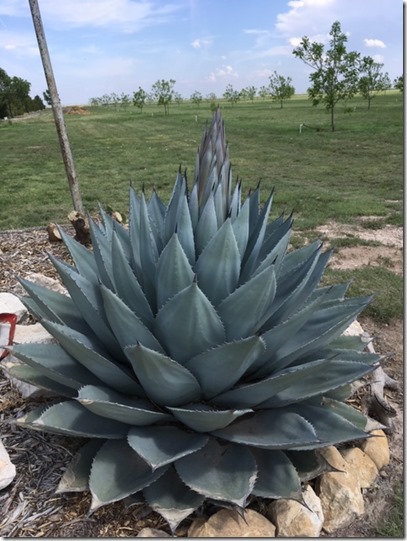 Two weeks later the mast had grown this much. 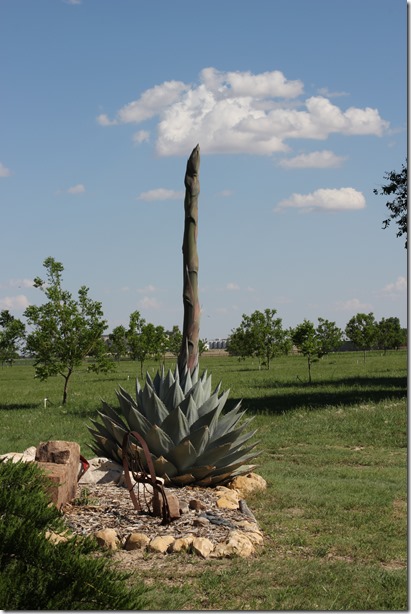 Soon after, as the stem grew, the branches that would hold the flowers started coming out. 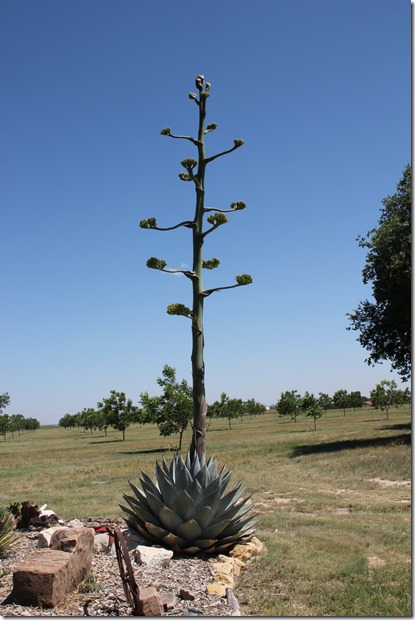 As it grows, the branches develop clusters of flowers. The clusters at the bottom of the mast begin to grow and open while the top of the mast continues to get taller and the flowers at each level develop and open in order, the lower ones opening first and the higher ones following suit as they mature and age all the way up to the top. 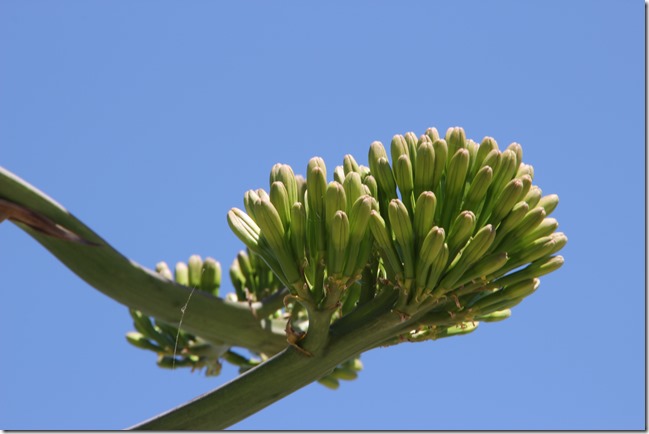 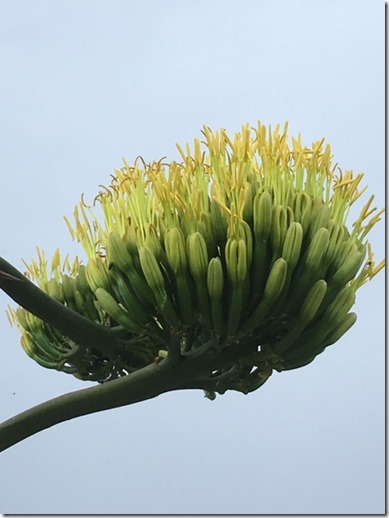 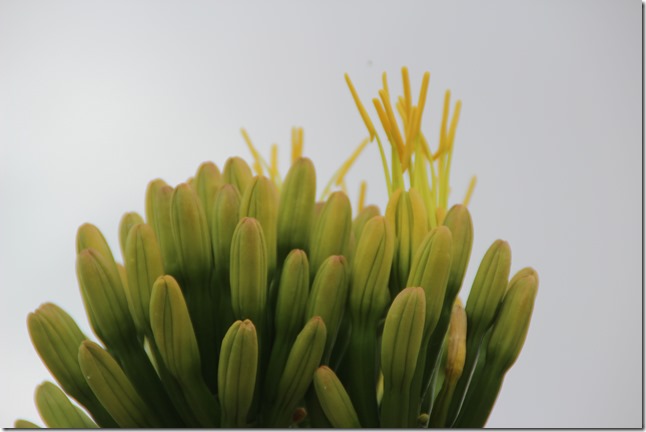 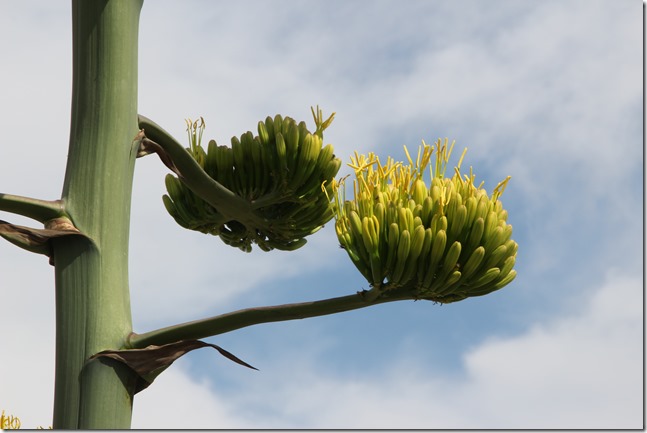 By June 27th most of the flower clusters were open all the way to the top, and we took this picture with me for a point of comparison of its height. So if I am 5’3” the mast must be between fifteen and twenty feet tall at this point. Some of the flowers at the very top are not quite open yet, but it’s probably about as tall as it’s going to get. 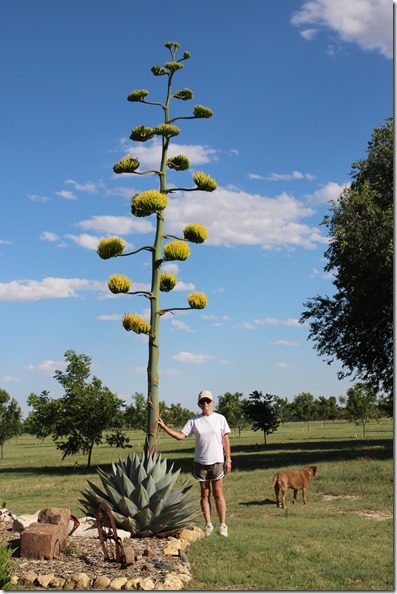 Something this tall is pretty easy to see, even from a distance. This is what everyone saw as they drove down the street, 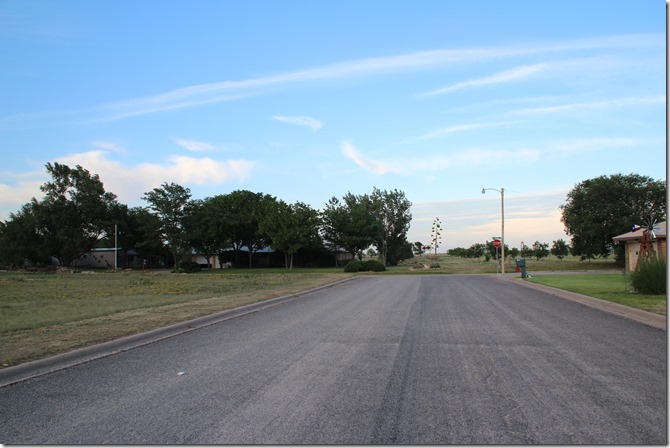 and as they came closer. 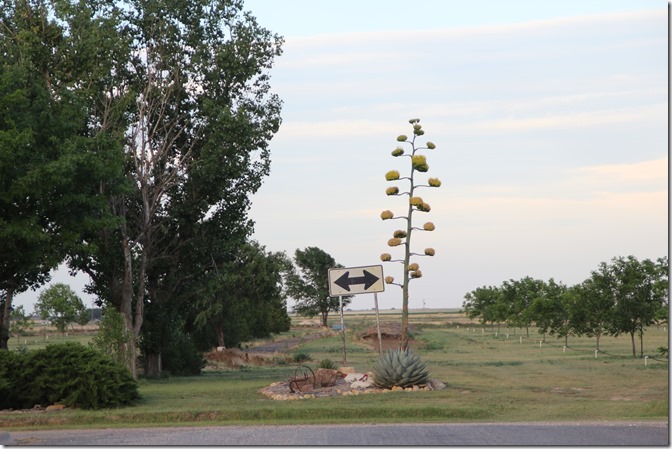 By July 30th the leaves of the rosette were turning brown and dying, the blooms that had opened first were drying out and going to seed, and the whole thing was beginning to lean over. It was time to let it go out in a blaze of glory. 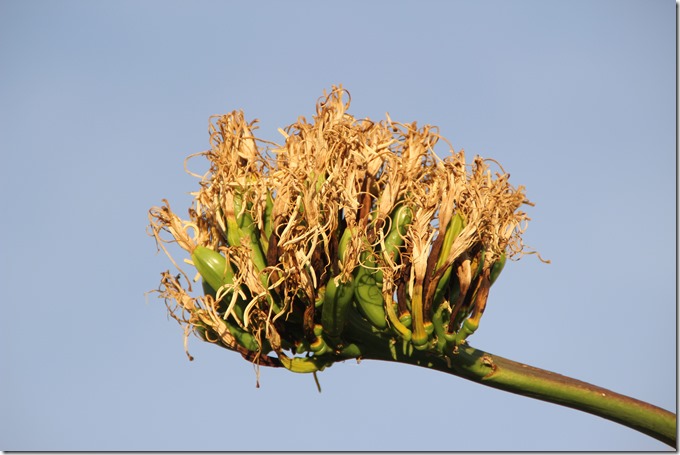 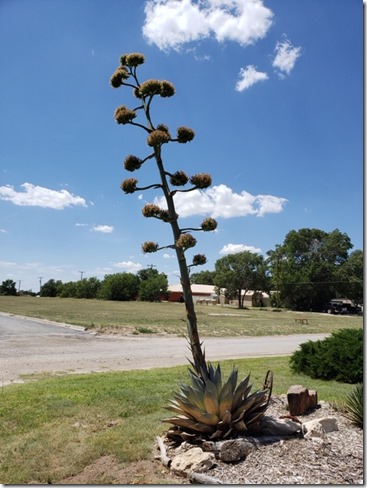 Derrel Embry and Chase Garlington did what I didn’t have the heart to do: cut it down, load it, and take it to its new home. 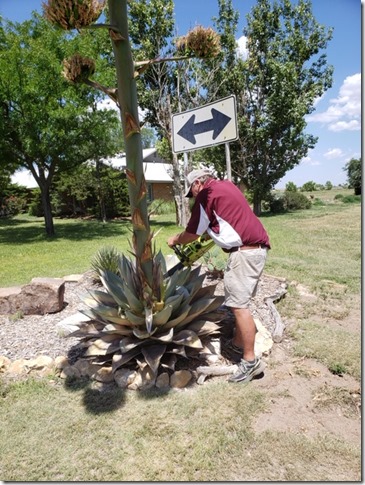 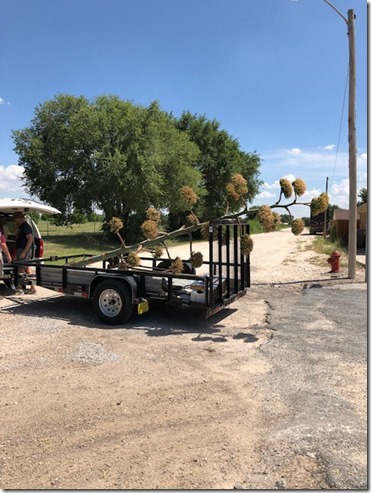 We measured it after it came down.  From May 3rd to August 3rd, in three months, it had grown 17 and a half feet tall; 18 and a half if you count the body of the plant itself. The Internet said this variety would have masts 12 feet tall. No wonder I was proud of this one!

I am in the process of reworking the bed now. It looks rather forlorn and empty. This agave variety doesn’t produce many pups, or baby plants before it dies, which I happen to like since I think a single plant makes a cleaner, more impressive specimen without lots of babies underneath the parent plant. But I did salvage five small pups, and one of them will continue the legacy of the original.

For now I will leave you with one more look at what it gave its life for. And stay tuned. When the renovation is finished, I will share it with you. And I will share a picture of it when the mast is settled in its new home. The flowers are beautiful and bright gold when the sun highlights them. 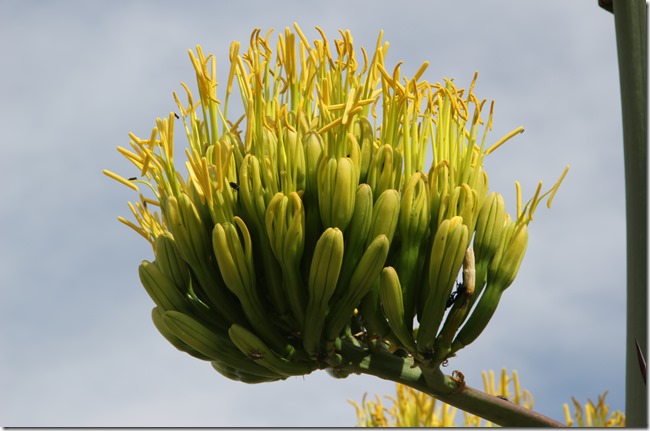 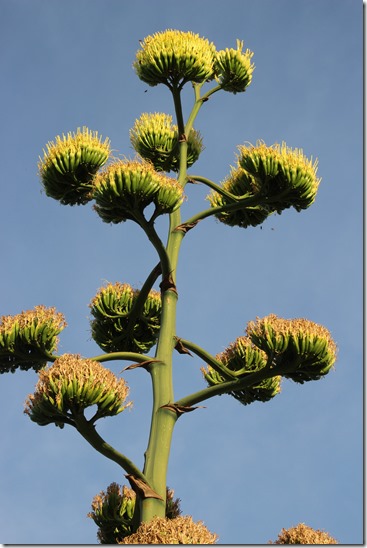 Thanks to Derrel Embry and Chase Garlington for doing the hard work to save it, and to Kathy Embry for wanting to give it another life.