I had the pleasure of attending my first Mid-States Cactus and Succulent Conference June 21-24 in Saint Louis, Missouri. The cactus meeting was the real reason for the trip, but since we had not been to Missouri, Bill tagged along and we had a great time. What we did and saw in Saint Louis is another story; the cactus event is the focus here. 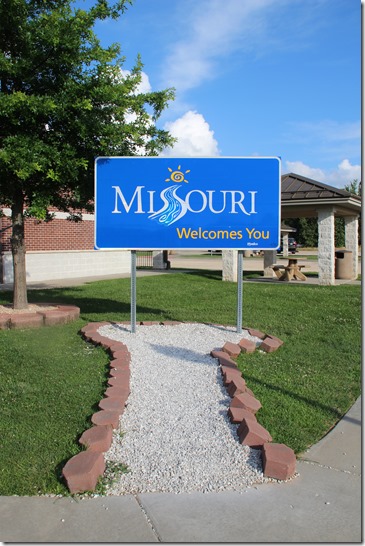 These events always begin with registration and plant sales the day before the sessions start. I had promised myself I would not come home with yet more plants to find a spot for, but alas, there is always something for sale I don’t have, and they are just so darn seductive! I signed in and then made my way to the sale room in hopes all the good specimens were gone and I wouldn’t be tempted. Fat chance. 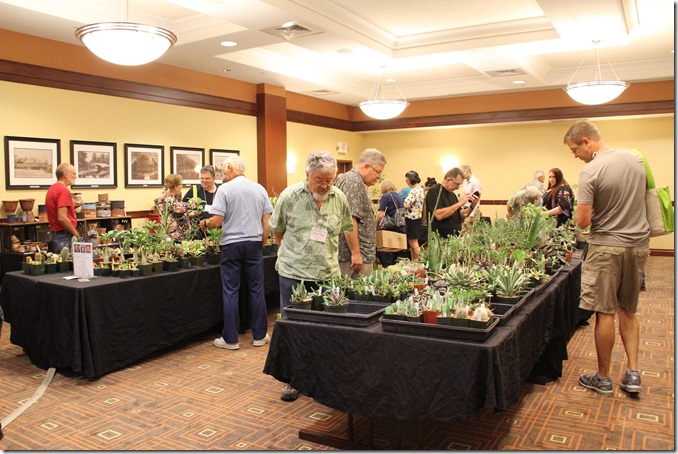 Friday morning Mike Hellman and Neal Bohlman, both members of the Henry Shaw Cactus and Succulent Society who hosted the show, kicked things off with opening announcements and introduced Woody Minnich from Edgewood, New Mexico,  who shared the plants of Socotra with us. 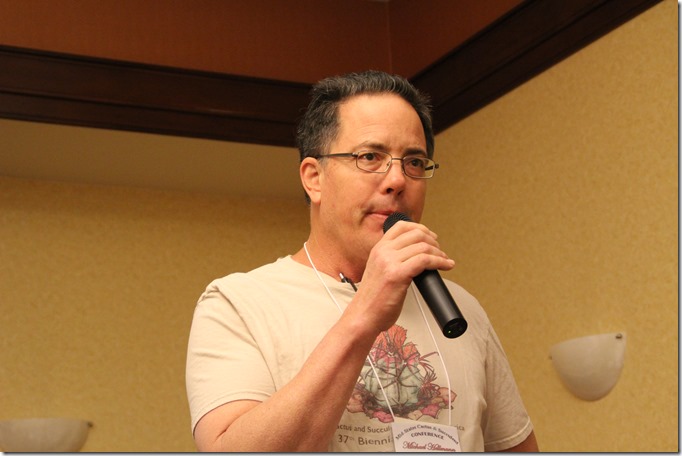 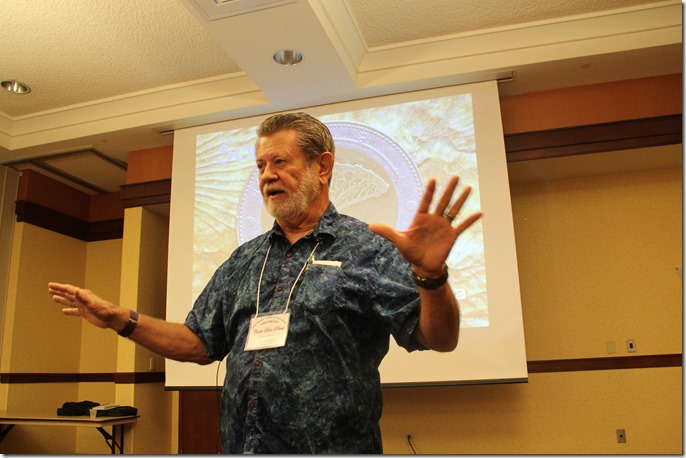 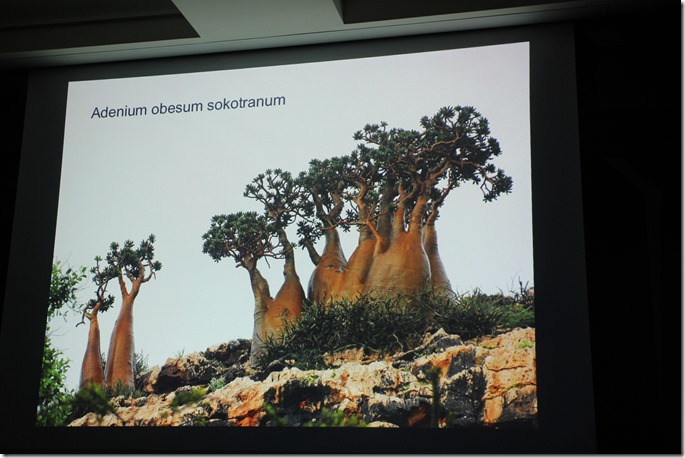 Neal Bohlman, who is a euphorbia fan, followed Woody with a talk about succulents from Somalia. 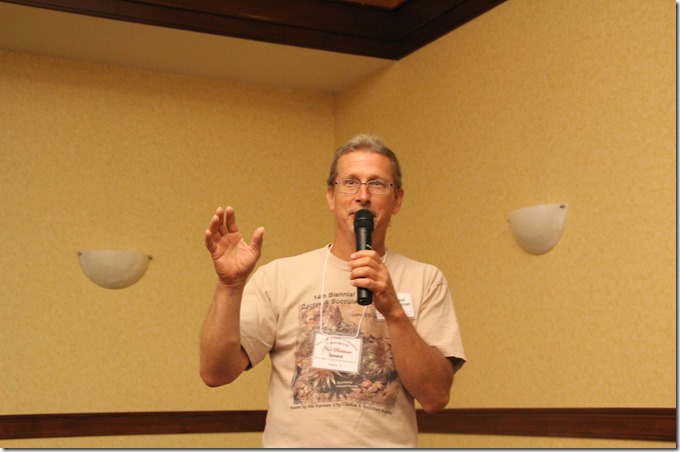 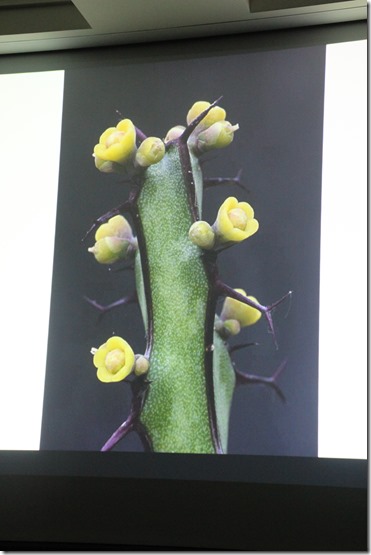 Dan Mahr from Sun Prairie, Wisconsin, a long-time very active member of the Cactus and Succulent Society of America,  was next with the first of his two-part program on South Africa’s Namaqualand’s succulents. And yes, those beautiful flowers are on a bush that is in the succulent family! 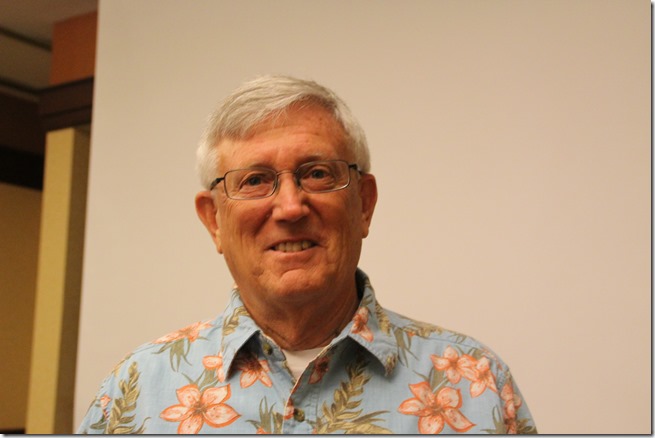 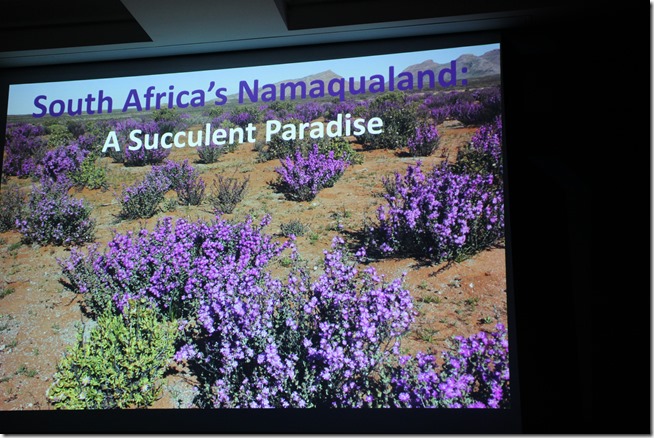 After lunch we saw how the Thai people train the roots of adeniums, aka desert rose, courtesy of  Henry Shaw member Tracy Vymola. She entertained us with tales of how her bedroom had become an adenium greenhouse and shared photos of beautiful plants grown and nurtured in Thailand as well as plants of her own. More about adeniums in a later story. 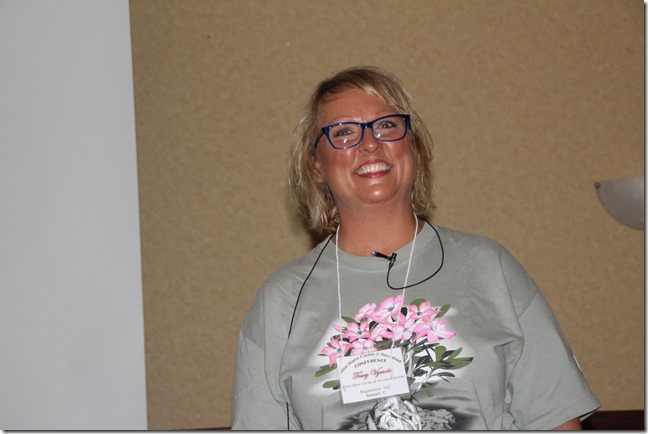 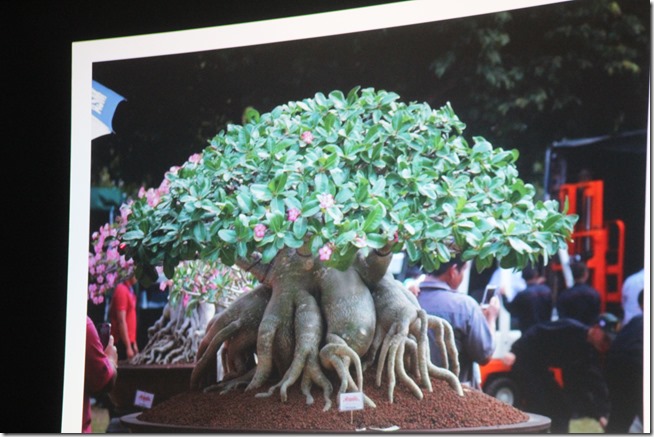 Rob Wallace was next with what I found to be a very informative and helpful talk on the Ecological, Anatomical and Physiological Adaptations of Succulent Plants. And you thought these meetings were just a bunch of strange people standing around swooning over sticky little plants. Ha! Rob is a biology and botanist professor at Iowa State University, and he educated us about the adaptations these amazing plants have gone through to survive their harsh living conditions to still be with us today. Rob gave us a wealth of information and rather than frantically try to take notes, I just took pictures of his slides. This is just one of them. And it may look like Greek to you, but as he explained the terms, it made perfect sense. This is why we cactus geeks go to these meetings- to learn about how our plants function so we can use that information to help them stay alive. More about his information in a later story. 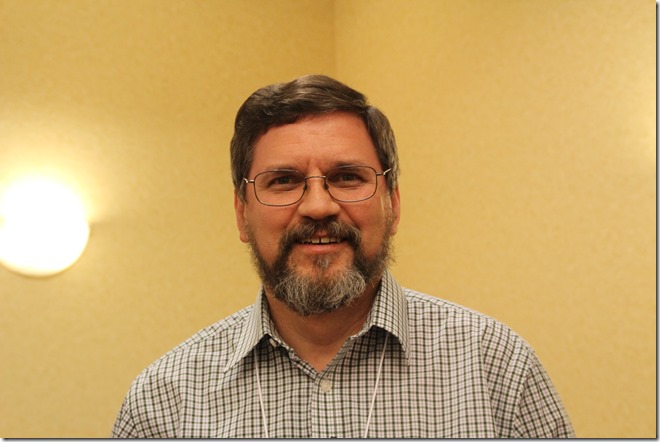 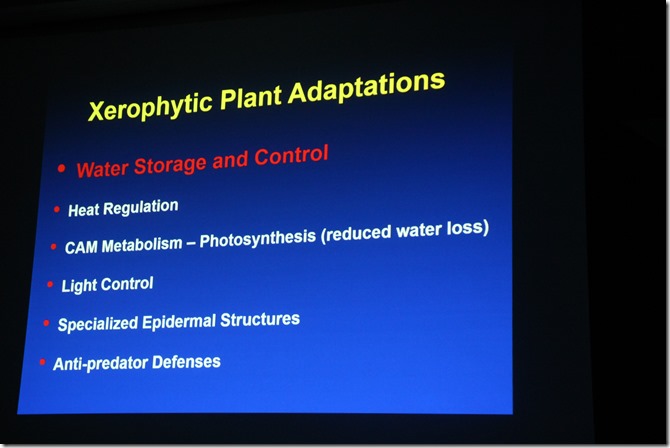 Woody Minnich gave another talk, this time about new and seldom-seen plants in Mexico, where he travels extensively searching for specimens in their natural habitat. I will admit this is one talk I had seen last summer at the CSSA convention in Tempe, Arizona, so I bowed out to spend some sightseeing time with Bill. I hated to miss it, because Woody always gives entertaining and educational talks and it never hurts to see them again, but I wanted to explore Saint Louis, too, so I did sneak out.

Saturday morning after drooling over the plants and hand-crafted pottery for sale again, we started out with the second part of Dan Mahr’s trip to Africa’s Namaqualand. It really is a wonderland of succulents; ten percent of all the world’s succulents come from this area in South Africa. I would love to see them in person. 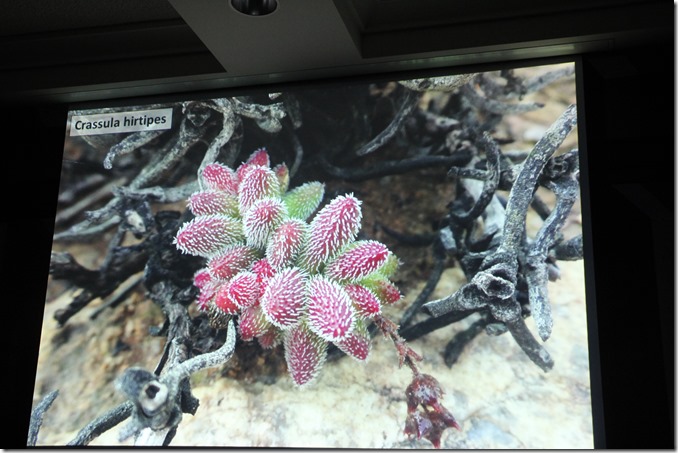 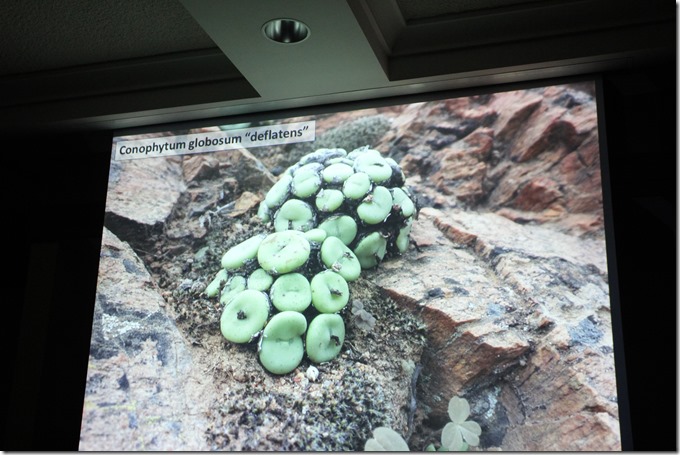 Pam Schnebelen, another member of the host Henry Shaw Cactus and Succulent Society, demonstrated techniques for germinating cactus and succulent seeds successfully. I found out I have been doing it all wrong! But she was very gracious and said if I have plants coming up, which I do, then I must be doing something right and don’t worry about it. The society went to the trouble to give all participants seed growing kits with instructions, materials, and seeds so we can practice when we get home. I thought that was above and beyond what was expected and appreciated the work they put into making the kits available. I haven’t had the chance to use mine yet, but rest assured I will. Again, I realized the best way to save the information was to take pictures of her slides. This is just one of them. 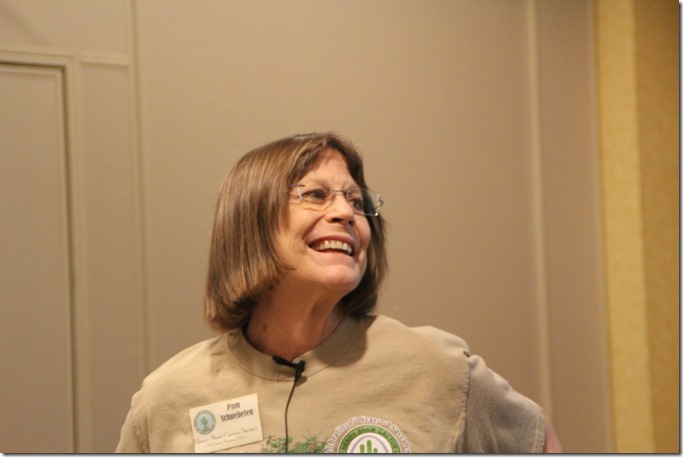 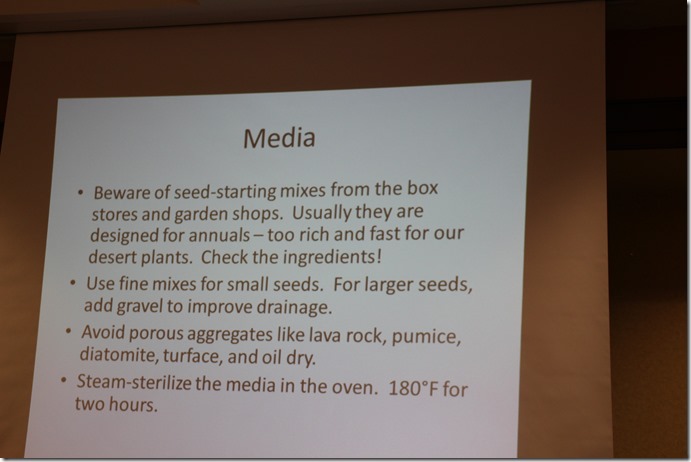 Tracy Vymola was up next with a hands-on demonstration of the first step in training the adeniums like it is done in Thailand. She asked for volunteers, so naturally I was up front and center to be picked. She brought young plants she had grown from seeds for six participants to work through the first steps in training the plants. It was fun and the best part was that we got to take home  the plants we worked on! Lots more on this process in yet another story. Perhaps you are sensing a pattern here of more stories. Stay with me in the weeks to come. 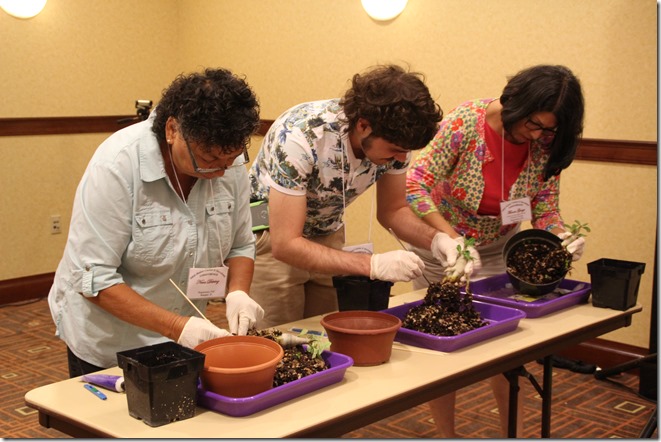 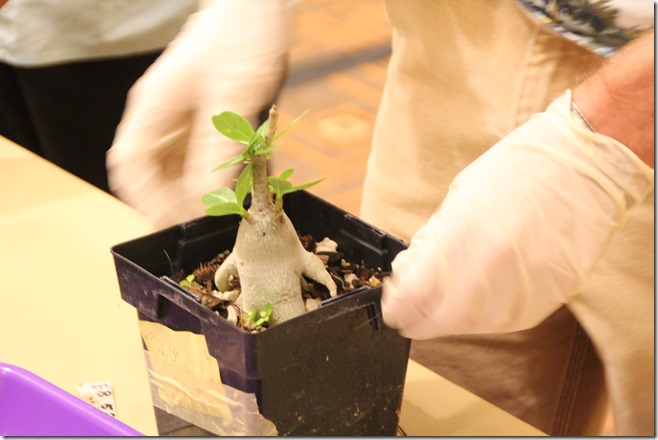 After this session and lunch on our own, a side field trip to the Missouri botanical garden was next. I didn’t sign up to go with the group, and should  have, because they were allowed into some areas the rest of us who went on own did not get to see. But Bill and I enjoyed the sections we did see. It is a large garden and we missed many of the displays, but it was worth the trip. I will talk about that side trip in a later story about what all we saw in Saint Louis. 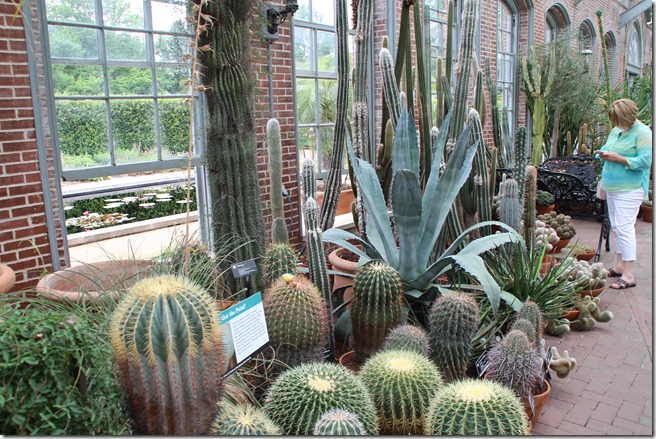 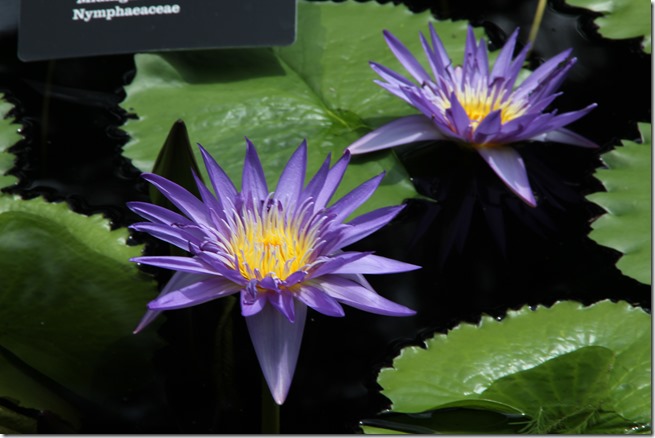 That night we enjoyed the banquet and rare plant auction, This is a standard event at cactus conventions. The meal is always good, you meet new people from all over, rare plants are auctioned off as a money-raiser for the hosting association to help with the cost of the conference, and it is fun. Rob Wallace has been the auctioneer at several of the meetings I have attended, and he always makes it a lively and profitable event. The one plant I was tempted to bid on also sold for the highest bid, an ariocarpus that went for over $300. That one didn’t come home with me. 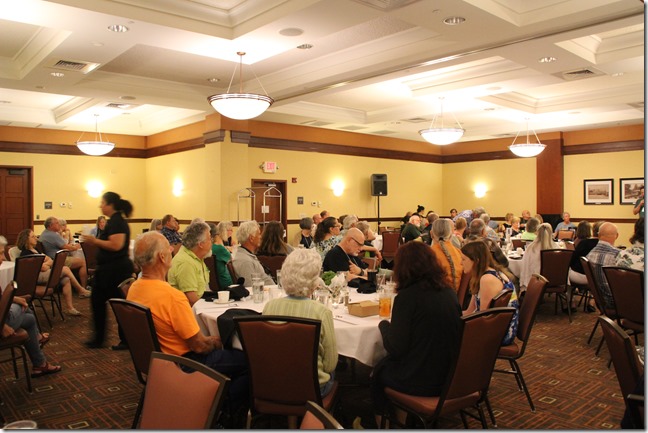 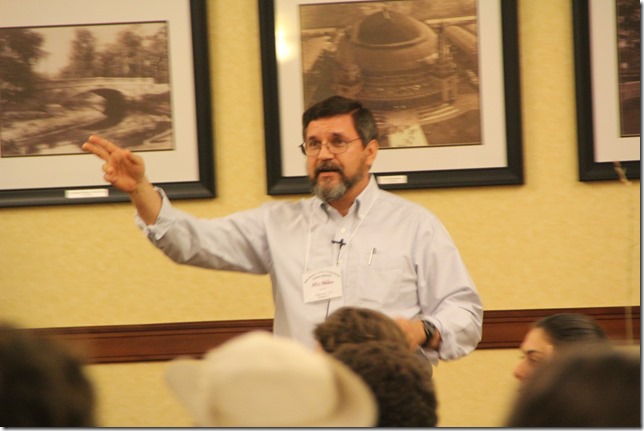 Sunday was the last day and sessions ended at noon. That day began with CSSA (Cactus and Succulent Society of America) president Judy Pigue sharing her garden in Kansas City, Missouri and the cold-hardy plants she has grown successfully in that area. 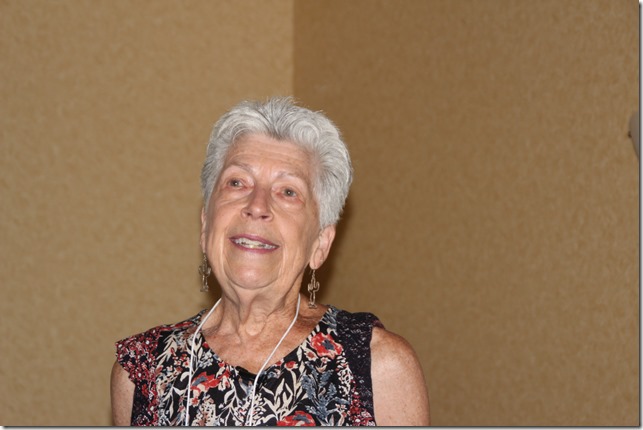 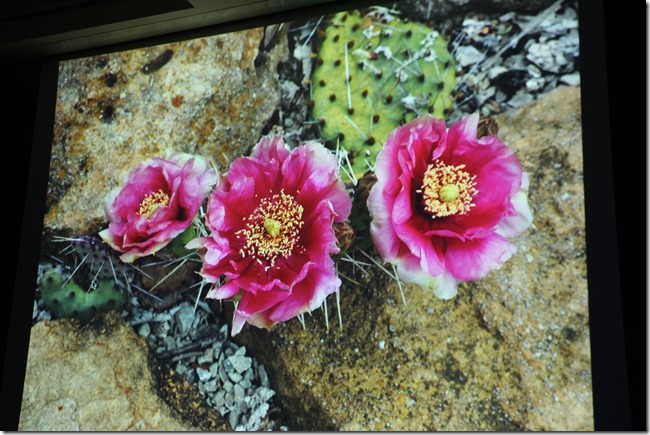 Judy was followed by Joe Merkelbach, Henry Shaw Cactus and Succulent Society’s Conservation Committee chairman, who explained the difference between being threatened and endangered and made us aware of cacti and succulents on those lists, many of which are native to the Big Bend Area of Texas. 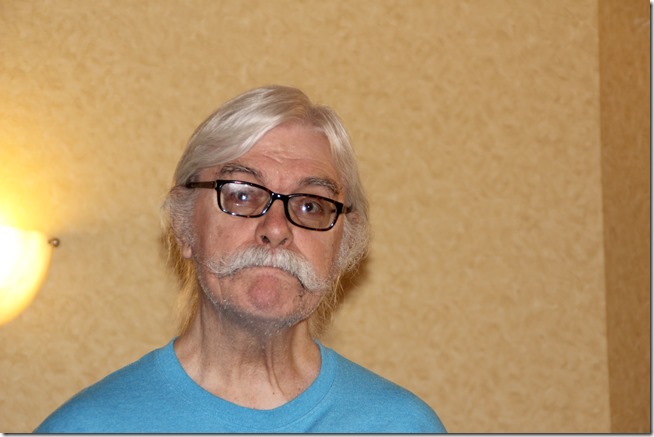 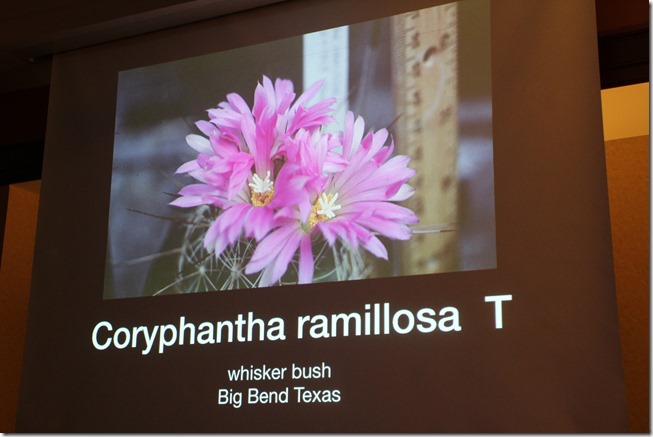 The last session was Woody again, this time on Secrets of  Growing Quality Cacti and Other Succulents. Some of this information I had heard him talk about before, but I needed to hear it all again. He also talked about some basic cacti facts that we all kind of take for granted without really considering how to use that knowledge for the benefit of our plants. You’ll probably hear more about this in a later story, too. 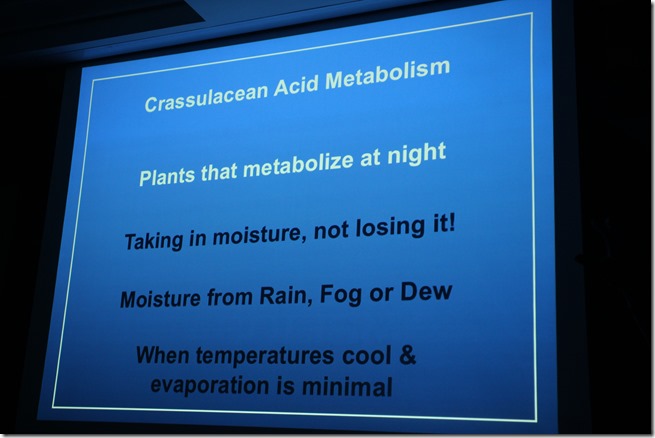 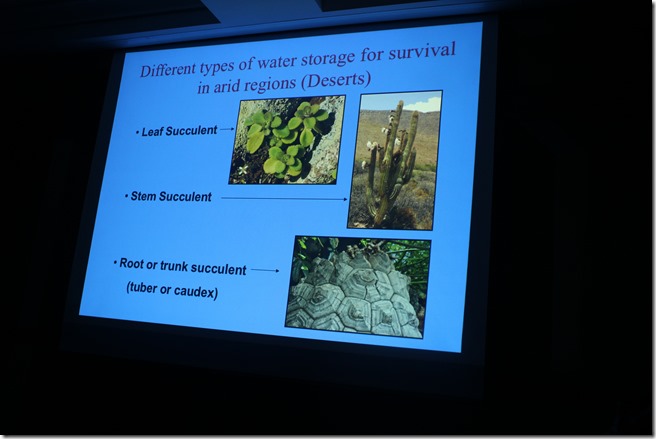 I came home with five new plants I bought, the golden barrel banquet table centerpiece I won, the adenium from Tracy’s demonstration, new friends, and a wealth of knowledge that will help me grow outstanding cactus and succulents. What a deal!

I will share much more of that information with you in coming stories. Stay tuned.