I was in Lubbock the other day after our general area had been blessed with quite a bit of rain; nothing like Harvey-drenched Houston, but some good rain. Various varieties of Texas sage were absolutely outdoing themselves all over town. Bright lavender/purple splashes of color decorated businesses, homes, right-of-ways like giant shots of paint from the Hulk’s paint gun. And they really were everywhere!

I have tried two different varieties of Texas sage in the past with no luck, perhaps inexperience on my part, but I will admit it, once again I was seduced by all that color. Nothing would do but that I come home with a sage bush to add to my collection. I will also have to admit I have lost the tag of which variety I made it home with, but that’s okay. If this one doesn’t survive the winter, I’ll be sad, but I won’t try it again. Muleshoe is on the cusp of zones 6 and 7 and that hour it takes to get to Lubbock from Muleshoe really does make a difference in what grows well there compared to here.

I brought home a small specimen in bloom. It was lovely. When the flowers fell off, I put it in the ground and patiently watered and checked on it. Sage may be drought-tolerant, but it needs water to get established that first year before it is safe to cut back some on the water. And then a few mornings later I go out and Boom! Pretty flowers! 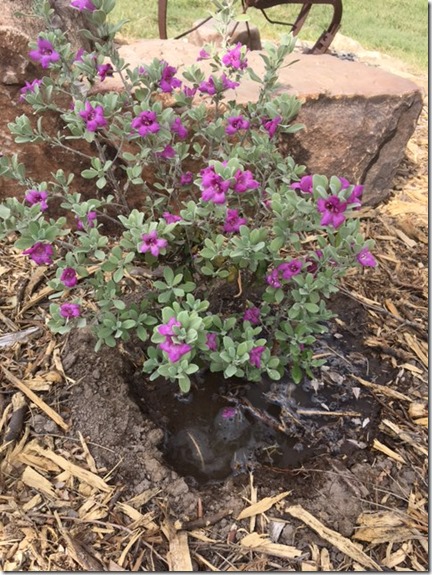 I planted the new specimen on the east side of a large rock in the bed at the dead end of Juniper Street as you turn to come to our house. The plan is for the rock to give it some protection from the wind and by holding heat in the winter. 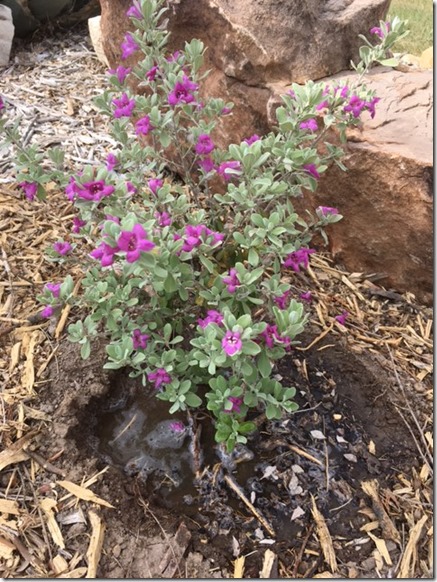 As is always necessary when planting any new plant, even a drought-tolerant plant, water is essential at first to help it get a good start by helping the roots get established. After the first year, water can be cut back after it has settled in. And rain will help it bloom.

But once it is settled in its new home, I’ll water about once a week and enjoy the flowers. I read it is called the barometer plant because it blooms before it rains, and especially after it rains. What a deal!

Based on the color I saw in Lubbock after the rain, there may be something to that.

I also read that pruning in a tight round shape is not good because the new growth blocks out the sun on the inner growth, sort of suffocating it and the result is the plant may die. Better to trim sparingly in a more natural way and let it do its thing. 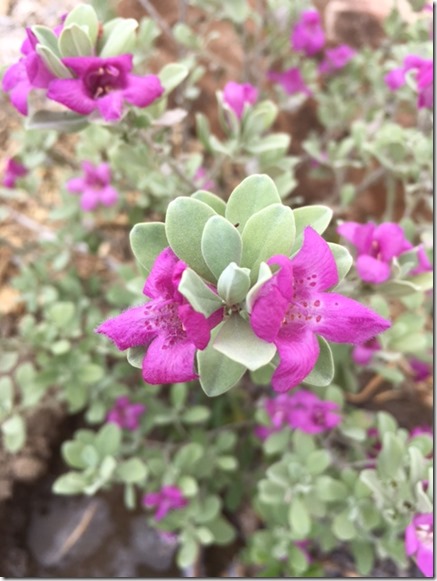