My coryphantha rungonii always surprises me when it blooms, and it did again just the other day. 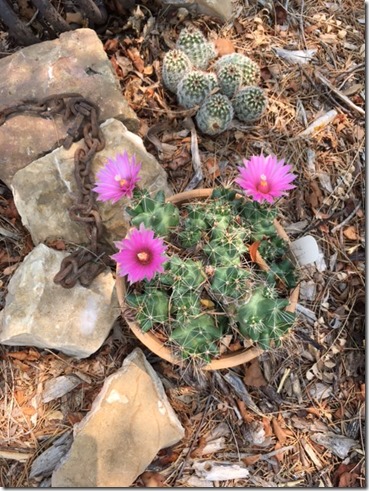 I googled coryphantha to find out more about this particular cactus and looked at some of the images of coryphanthas and really couldn’t find one that looked much like mine! To be fair, the images all seemed to be of a single plant, and as you can see here, mine has formed a cluster of cactus. But based on the list of identifying characteristics-tubercles rather than ribs, flowers forming at the top or apex of the plant, for example-and the fact that this is one specimen for which I was smart enough to keep the ID spike, I know it’s a coryphantha. Since it does have tubercles much like mammillarias, originally it was classified with them, but in 1868 this species was given its own name and group. Mammillaria blooms form a halo around the plant and coryphanthas bloom from the top, which cinched the identification for me. But more than once I read that as each plant matures, they don’t all look quite the same, taking on slightly different characteristic looks and don’t always exactly match the description.

Coryphanthas are native to Central America, Mexico, Arizona, New Mexico, western Texas, and south and central Montana. I don’t know what the weather is like in the south of Montana, but it must be a bit warmer than what I would expect from there since the other locations are hot. I have tried this particular coryphantha in the ground outside here and our winters have been too cold for it to survive, so this one and a couple of other smaller ones I keep in pots and take in when it gets cold. Apparently other varieties are more cold-hardy and can withstand colder temps. 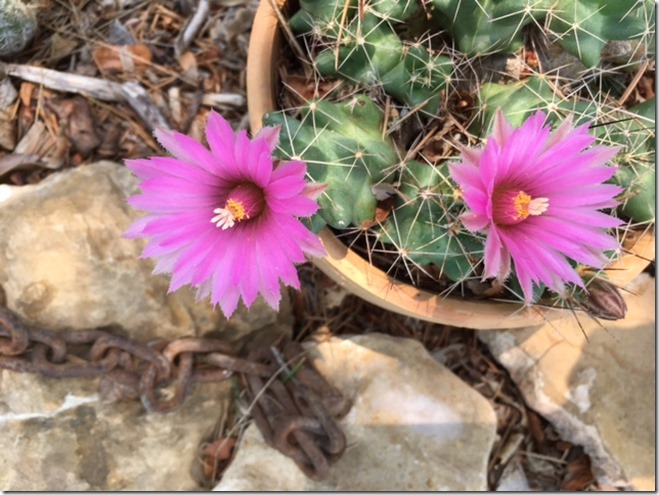 I usually see the buds and anticipate the blooms on my cactus, but these buds sneak up on me. They must develop and mature to blooming status very quickly and I just don’t catch them. But it is always a nice surprise to walk about and Boom! Pink flowers  greet me. And other sections of the cluster will bloom off and on into the summer. 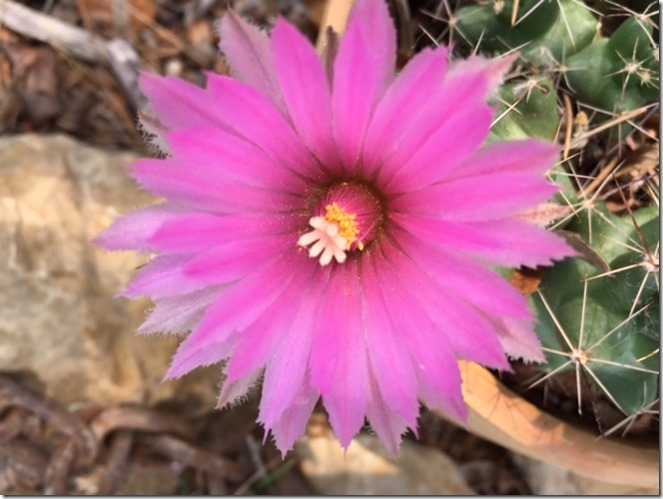 So I have more pink to look forward to.