Last time I told you about one of the two new plants I brought home from the TACSS meeting in San Antonio, the turbinicarpus lophoroides on the right. Let me tell you about the other one, an agave isthmensis. This picture was taken right after I brought them home in October 2016. 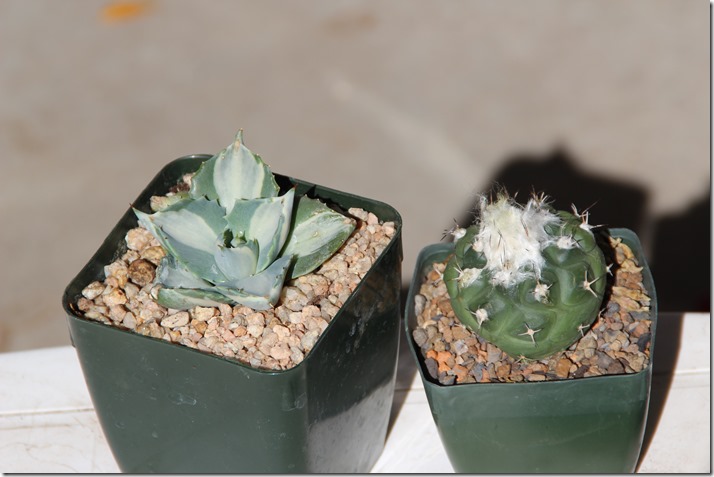 This shot was taken today, April 29, 2017. As you can see, it has grown some. The pattern in its variegation is what makes it interesting to me. And I like the tight rosette shape. 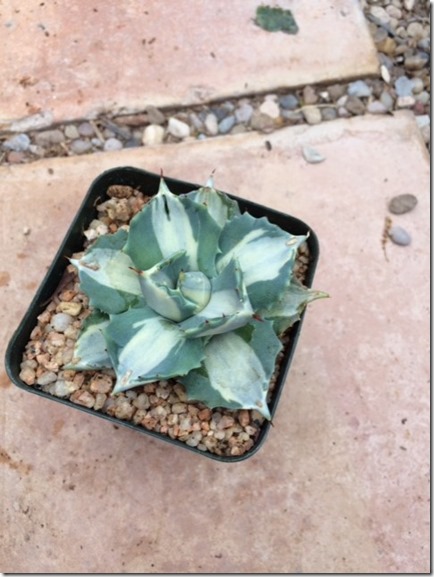 But it will never be a large plant. It comes from the Oaxaca area of Mexico and is also called a dwarf butterfly variegated agave. Mine no doubt is either a hybrid or one of many natural variations as it was labeled as a variety called “smoke.” It was also labeled as rare and one of the sources I checked said it was typically only available in collector’s circles. Well! I guess that gives me credibility as real cactus and succulent collector since I have one. I also have another agave that would be considered a collector’s specimen, an agave albopilosa that was germinated from seeds legally brought over from Cuba, a variety not readily available to the public, either, that I acquired at the 2013 CSSA convention, which I think also defines me as a collector. But that agave is another story, which I will share with you in the future.

And I’ve digressed again! But, back to the a. isthmensis, it might grow to be 2-3 inches tall and 4-5 inches wide, truly a small agave, which makes it a nice container specimen. It will produce its pups from under the bottom leaves rather than sending out runners underground with pups at the ends, like the larger agaves tend to do. And this means it will clump, little plants will begin to appear underneath, where the plant touches the ground or soil in its pot. And I will probably cut them off and try to root them since I think agaves are prettier as a single plant. I also learned a new word that describes the flower stem of this agave, acaulescent, which means having no stem or appearing to have none. So now I am curious as to what it will look like when it blooms because all my other agaves that have bloomed made the tall bloom stem, called a mast, characteristic of agaves. This one was not labeled monocarpic, which means to bloom once and then die, which most agaves making the masts do, nor did I see anything about how old it has to be to bloom. 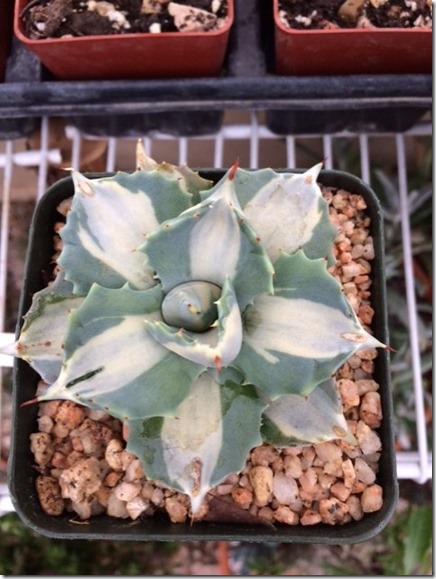 All of which gives me some things to anticipate while it slowly grows to its full five-inch size. I don’t think I have to worry about having enough space to keep this one.