To many people, if you say cactus, they immediately frown, wince, envision prickly pear, and want no part of any cactus. Which is a shame, because the opuntia family gives us beautiful flowers, and with conscientious pruning can be kept from taking over your garden like you see in pastures in the Hill Country and South Texas. 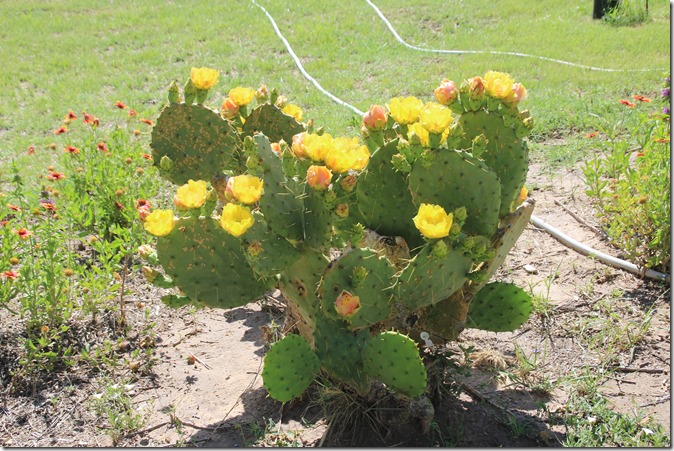 Prickly pear are in the opuntia family and are probably the best known, most easily recognized, and most widespread variety of cactus. I have about nine different varieties, most of which are finishing their blooming season now. My newest one will have red flowers, but did not bloom this year, so I have that to look forward to next year. They can be found in other colors as well. I will readily admit I don’t know the names of each variety and didn’t do a very good job keeping up with which bloom was on which plant when I took these pictures. That’s okay. My goal is simply to show you how beautiful the flowers are on these underrated plants. Notice the centers and the shading of colors of the flowers, 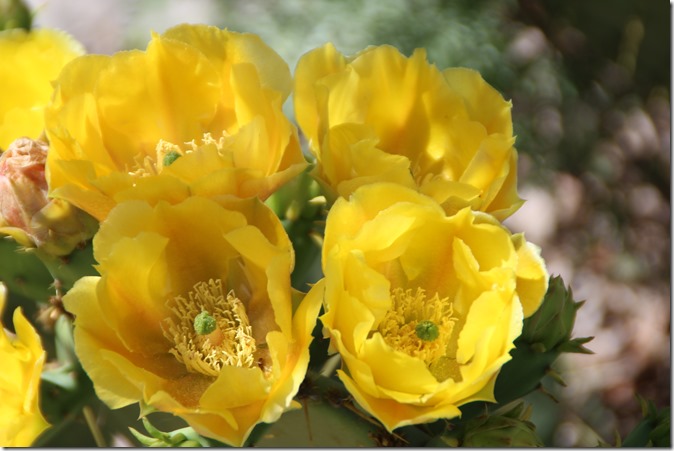 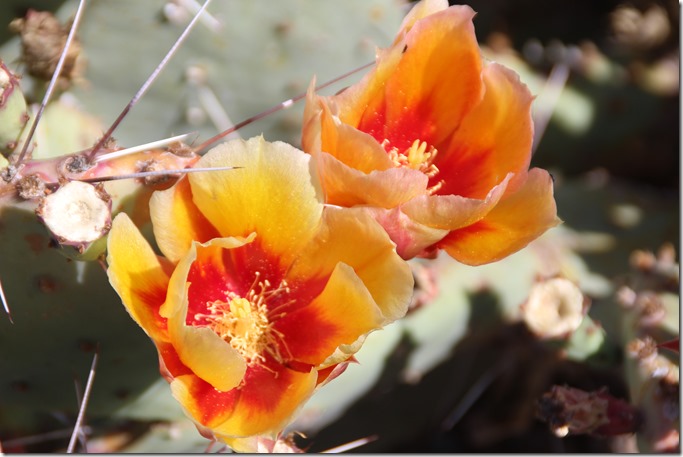 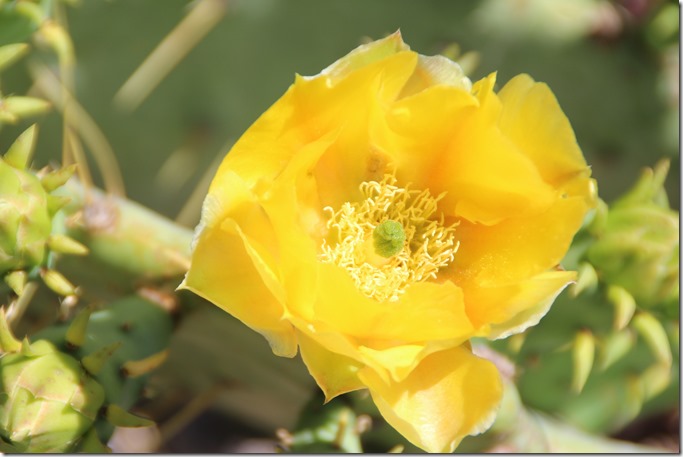 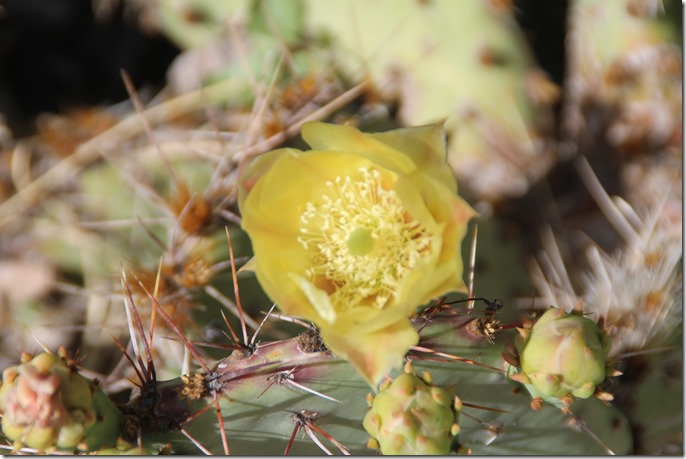 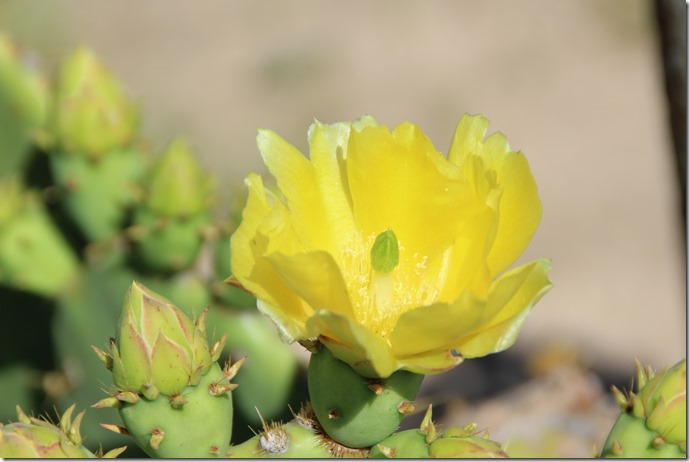 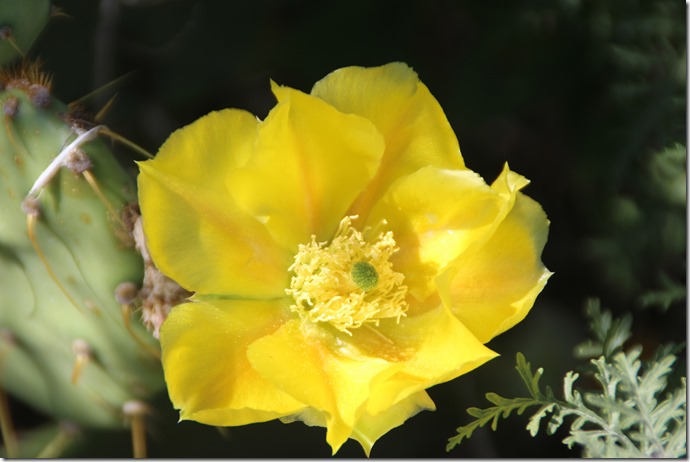 Some of these may look the same to you since they are mostly yellow, but they are on different plants and have subtle variations in color, centers, and petals. But they are just so darn pretty, I may have duplicated some of my choices. Oh, well.

After the flower fades, what is left is the fruit underneath, called a tuna, which is eaten in many countries, including ours, and  made into jellies and juices. The tunas turn purple and make it own statement in the early fall. But that’s another story.

Opuntias, like all true cacti, are native only to the Americas but you will see them all over the world now. (Remember-all cactus are succulents, but not all succulents are cactus, and some form of succulents can be found just about everywhere.) Prickly pear is one of the most cold-hardy of the low-land cactus. They also are known for their two different kinds of spines, the larger smooth ones that are fixed on the plant, and the smaller hair-like ones called glochids that detach and are the devil to extricate from your skin, the very thing that gives the plant a bad name! In South Texas, ranchers will use a tool that shoots a butane flame that they call a pear burner and singe the spines and glochids on prickly pear so the cattle can eat it. Humans also eat the pads, which can be found in larger grocery store produce departments.

I routinely prune and shape my clumps of pear to keep them from getting out of hand, which also keeps them contained in a shape that makes it easier to keep them weeded. Nothing worse than an overlooked elm tree coming up in the middle of a huge patch of prickly pear. I use tree loppers with long handles and sharp blades to do that, cutting at the base of the pad where it is connected to  the pad beneath it. I then use the loppers sort of like tongs to pick up the cut pieces to dispose of them. Thick sections of newspaper can also be used to pick up and carry pear, but be aware that some of the spines will still poke through. And gloves-I don’t care what the label on the gloves promises-the spines will go through them no matter what the gloves are made of. Just be prepared and have your tweezers handy for removal of the spines.

I have not read this anywhere or been told this, but it has been my experience that the blooms are like azaleas; the flowers will be on the new growth, so trim your plant after it blooms so new pads have time to grow for next year’s flowers.

So if you have shied away from prickly pear in the past, you might want to reconsider and add at least one to your collection. You won’t be disappointed. 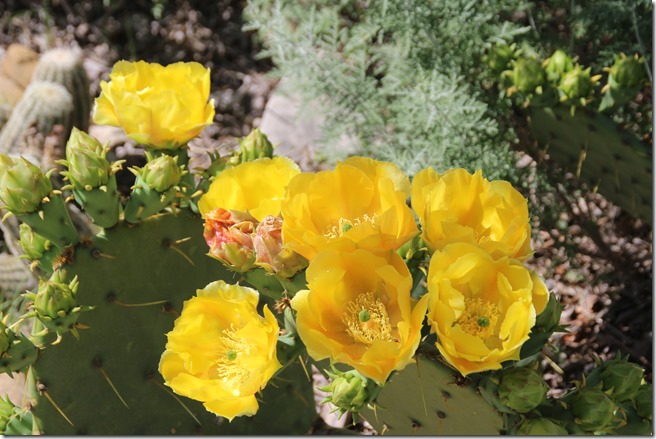 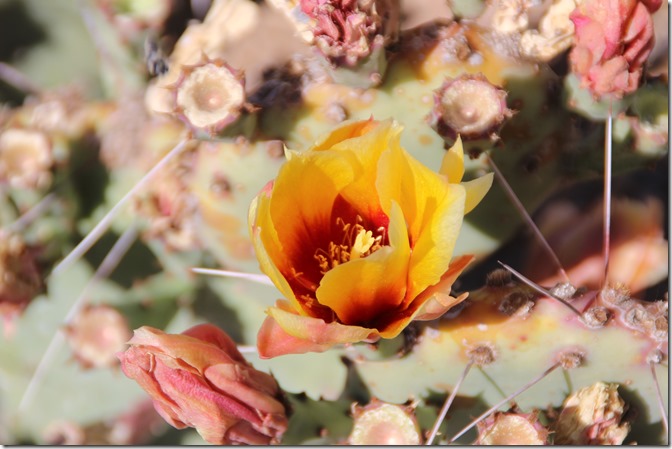