Add an Aeonium to Your Collection

One of my first really spectacular succulents was an aeonium. I think it was an aeonium sunburst. It grew tall and the rosette was about the size of a dinner plate. I never measured it, but it really was that big. Just a beautiful plant. Then it bloomed. And then it died. I was distraught and decided I would not get another one.

At some point I discovered that aeoniums, like agaves, are a monocarpic plant, which means they die after flowering. I also realized that they are just too pretty a plant to ignore even if they do die after blooming. So now I have four varieties. 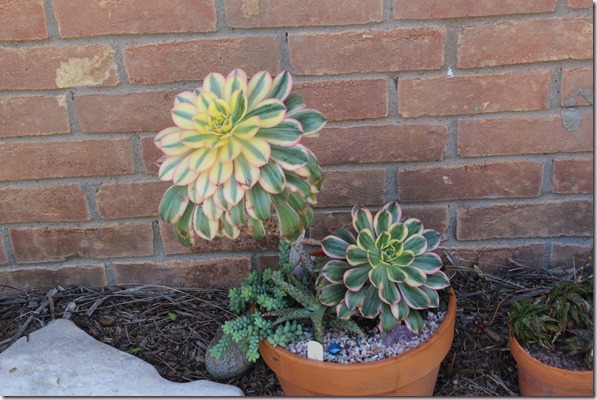 My oldest one is this aeonium sunburst. The lower rosette is a branch off the main trunk. I have had this one long enough that I have forgotten how old it is. 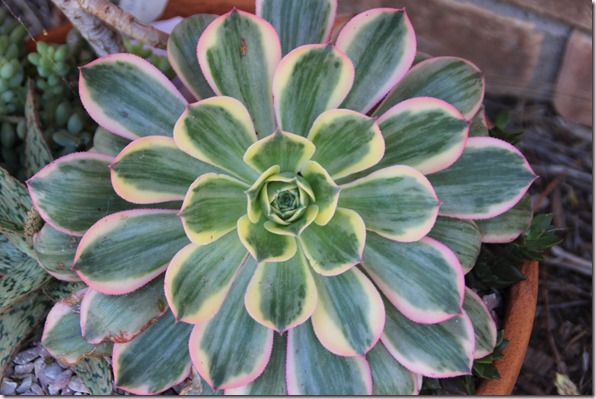 I hold my breath when we have a hail storm for fear of damage, and we had some hail this year, but I guess holding my breath worked because this one was not harmed! The others escaped the hail as well. 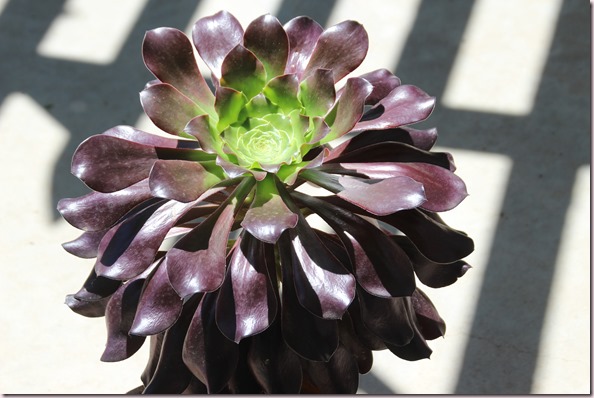 This voodoo Zwartskop is my second oldest aeonium, dating from 2011. 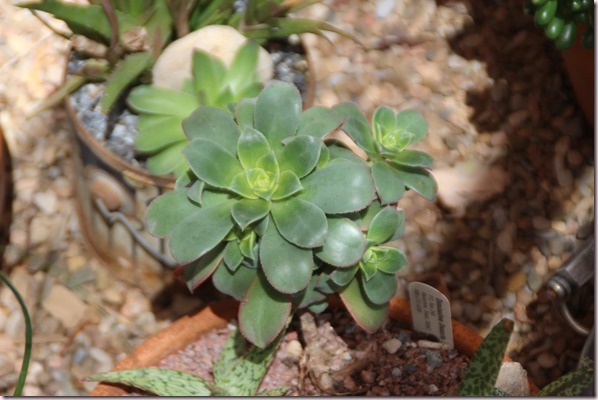 I think this aeonium kiwi must be one of the branching variety, and I have rooted a few cuttings from it. The branching varieties tend to not die after flowering. I bought this one in 2014. The edges of the leaves turn red as they age and take on a little more sun. 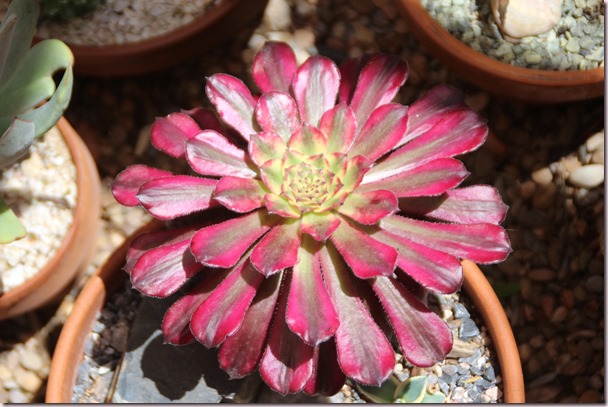 And this is my newest variety, aeonium Mardi Gras, which just gets more colorful as it grows. I ordered this hybrid from the Huntington Gardens offerings listed in my Cactus and Succulent Society of America Journal in 2014.

Aeoniums like heat, but not direct, really hot West Texas sun, so mine live in filtered sunlight. They also prefer a little more water than some succulents, so even though you will want to let them dry between waterings, don’t let them sit dry as long as you might let your cactus stay dry. They are not cold-hardy, so make sure you have a nice bright location for them over the winter.

New plants can be started from cuttings of small rosettes off the branching varieties. Just be sure to let the stem dry and scab over for a day or so before planting them. Or you can wait till the new roots start to appear on the end of the cut stem and plant them then. If a plant gets too tall and leggy and perhaps blowing too much in the wind, cut the main stem fairly close to the rosette, let it scab over or wait for the roots to appear, and then replant it. The original plant may or may not produce new rosettes on the now empty trunk. I think you can sometimes get an undamaged leaf to root, but I have not had much luck with that method.

I have found that the smaller ones might be a little tricky to establish, but once you get the hang of it, they are worth the trouble. They will be pretty for you for several years before the dreaded flowering might begin. So enjoy them while they grow and be prepared for the inevitable.