As with my other visits to the Vee Bar, I started my day off before breakfast by watching the wranglers bring in the horses from the range. I decided to take my pictures from a different vantage point this time, not thinking about the path the horses take to the barn as they come in. What was I thinking? I stood right where they loped in. But I stood very still, and they just ran right past me. 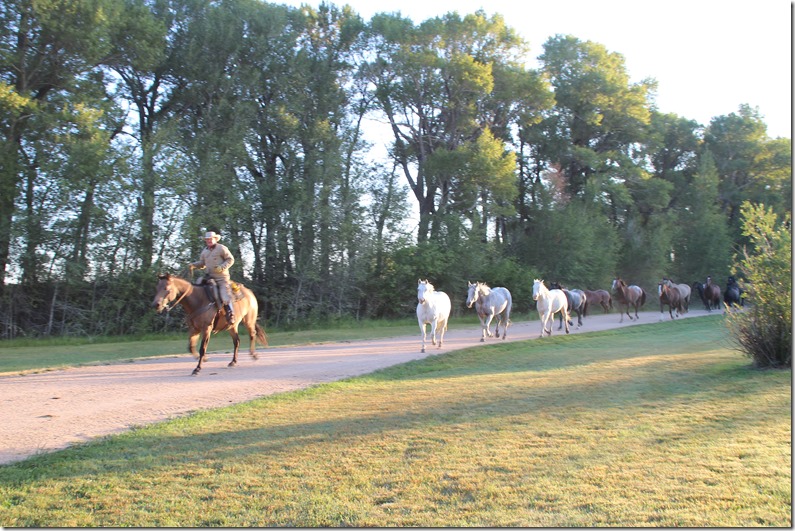 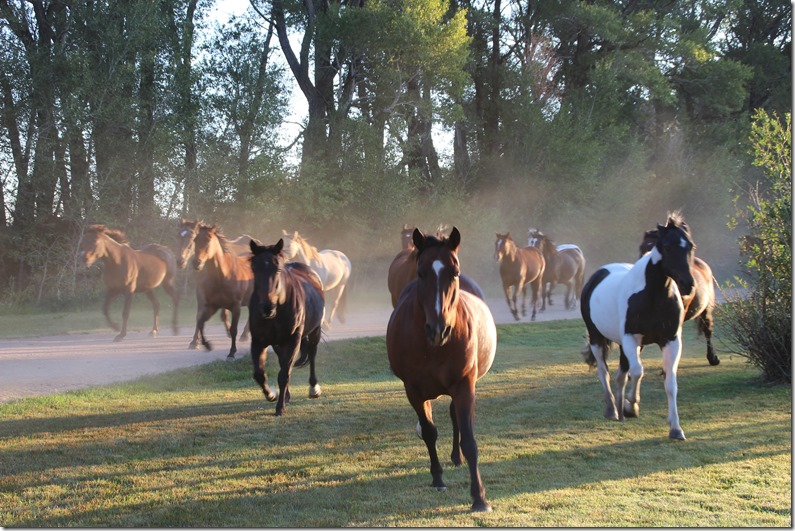 Kari Kilmer, who owns and runs the ranch along with her husband Brent, said they keep about eighty head on hand during their busy months so no horse gets overused. 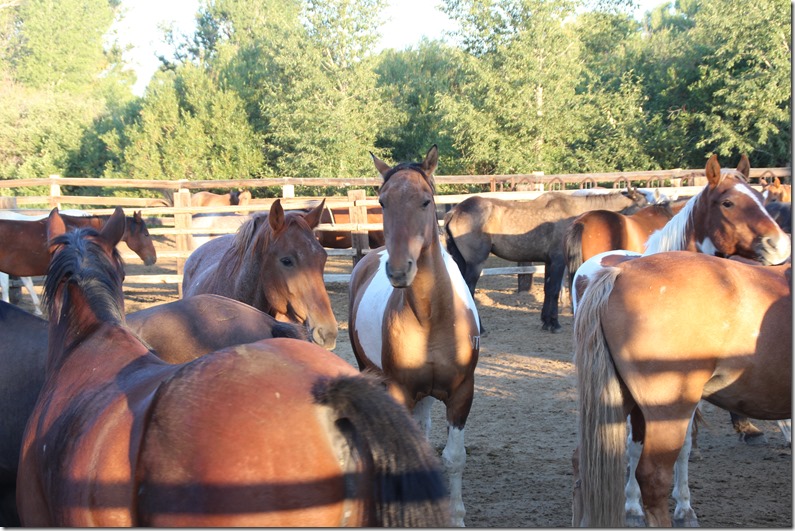 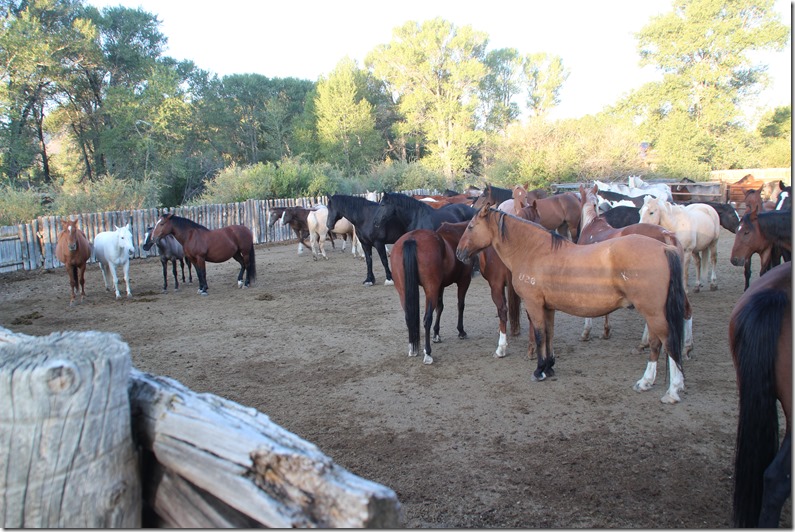 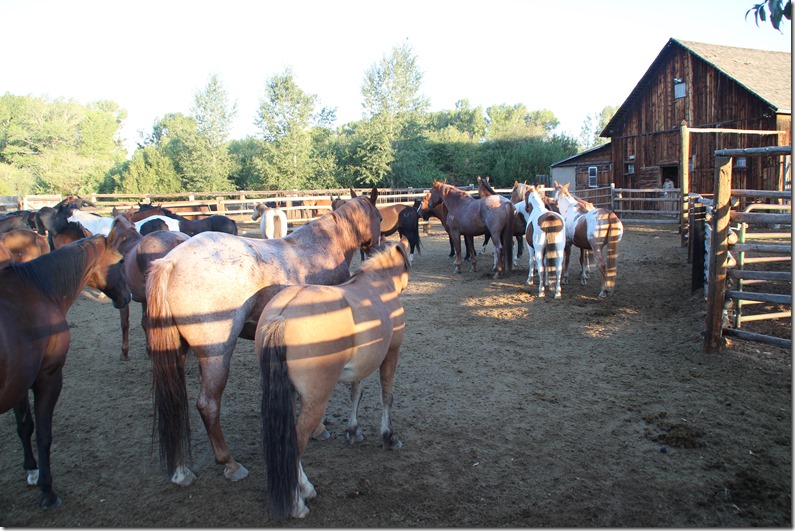 Before going to breakfast, we noticed activity in the river behind the cabin, two slender black bodies slipping in and out of the water, over and under the rocks. I never could get a shot of the whole little animal, but at one point, one of them was as curious about me, and he popped up and posed for this picture. Then he was off again. playing in that cold water. After some discussion and research, I have decided this is a little mink. Who knew? He and his friend were sighted a few more times, but I never had the camera ready at the right time. 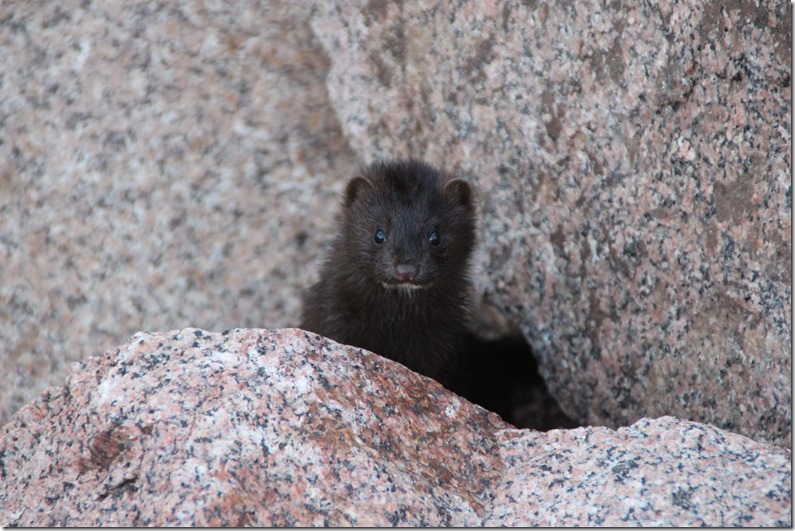 After breakfast I was ready to ride and Bill was ready to try his hand at fly fishing, so I went back to the barn and he visited with Joseph, his fishing guide for the morning. I was the first one there and ready to go.  Since the group of riders was small, it was decided Tommy and I could go ahead for the morning ride. Tommy and I knew each other from my other visits to the ranch, and off we went sharing stories and enjoying the morning. This was our view from the top of the mountain where we rode. The road is the highway we drove to the ranch entrance. 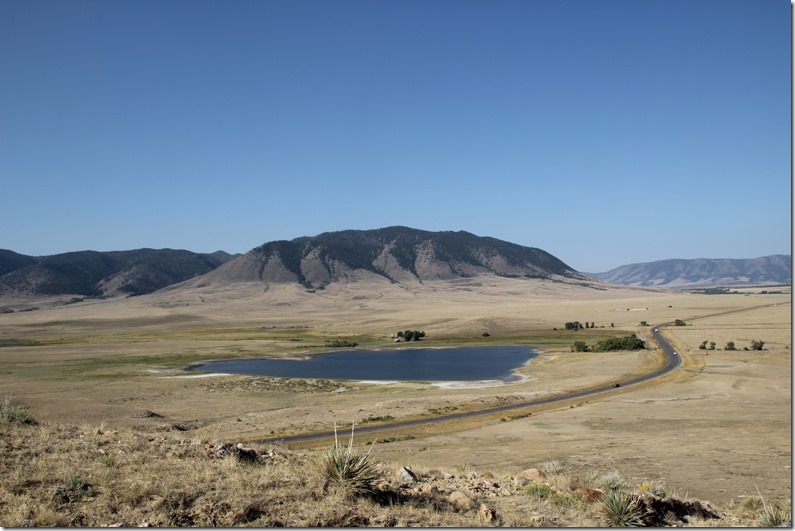 Since Tommy knew me from before, he was on the lookout for interesting rocks, and he was off his horse and picking up rocks before I even asked! We put a couple in the saddle bags and rode on. 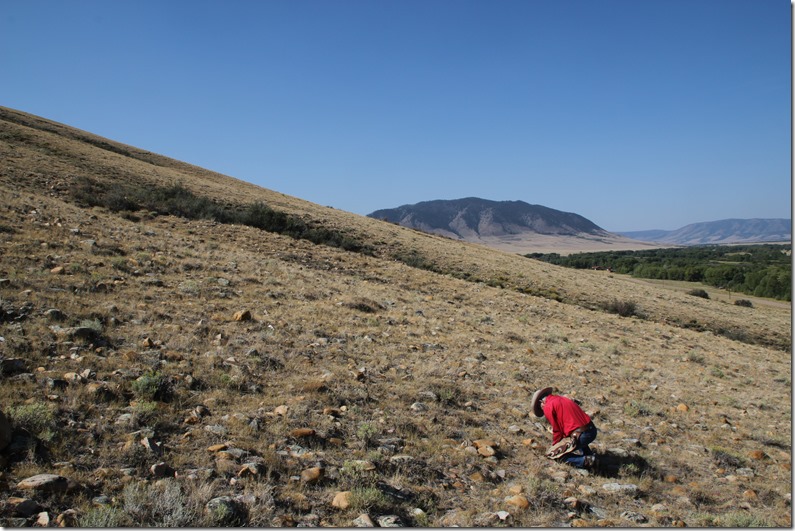 I am riding Malcolm, the tall palomino I rode on my other three visits to the Vee Bar. That was nine years ago, a chunk of time in a mature horse’s life- and for a human, too! We both have aged a bit, and it showed some when asking him to break out into a lope. But we did fine, and I enjoyed riding him again. 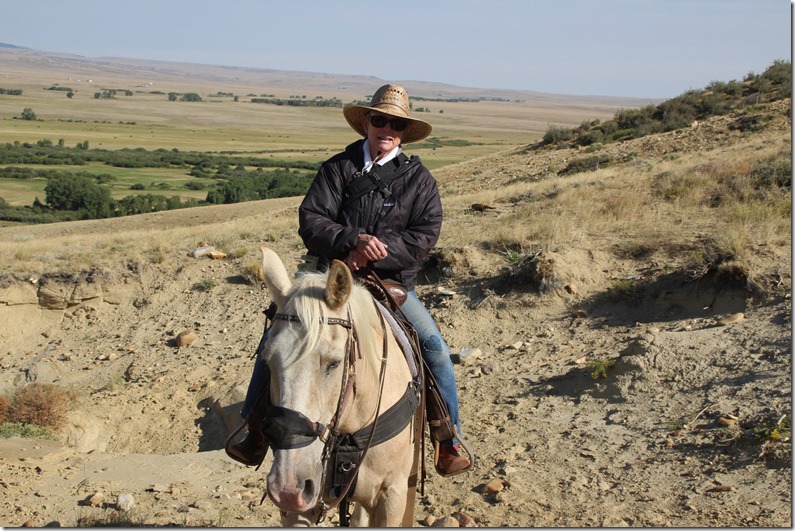 I always enjoy any view when looking over the ears of a horse. I took several pictures of Malcolm’s ears… 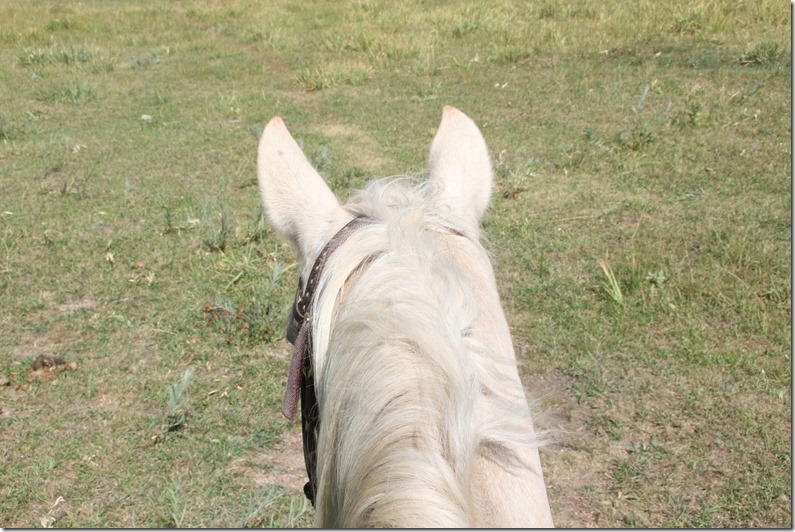 Our ride took us past this beaver dam. We heard water splash right before we got there, so I missed a shot of the busy little dam builder, but we rode the horses across the creek for this nice shot of the dam. Look carefully and you might be able to make out a smaller one under construction up the creek. 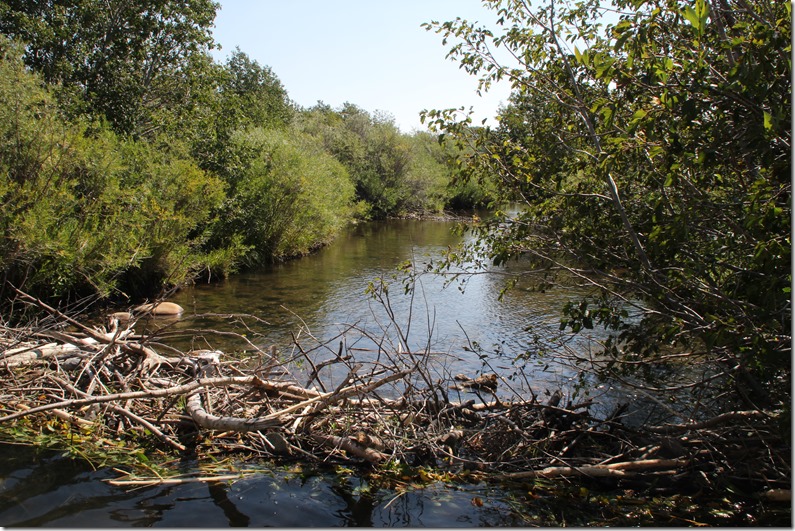 After the ride, I found Bill fishing in the river behind the cabin. The wind had come up, which made casting a bit more difficult, but he did catch one and released it. 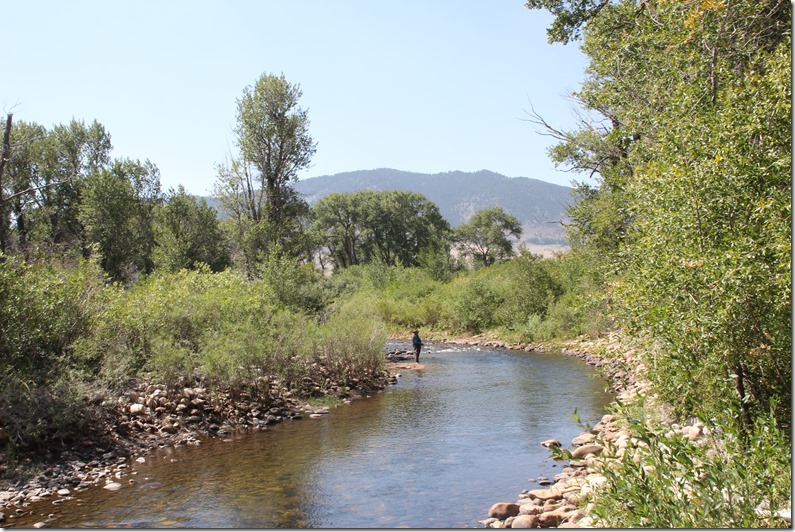 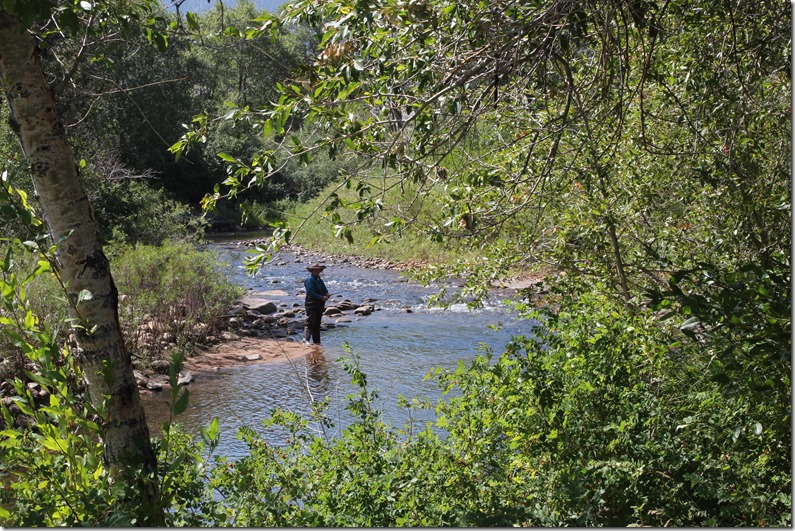 After lunch it was naptime for the fisherman and a good time for me to pick up the rocks I had gathered the day before. The pronghorns were back, too. 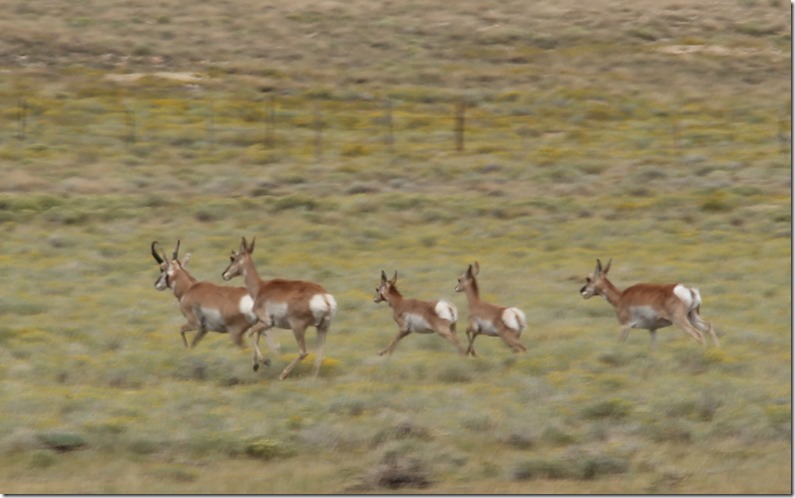 I chased this magpie around trying to get a good shot of this pretty black, blue, and white bird. He was not very cooperative; this is the best I could do, and it’s not very good. The pretty blue feathers on his wings don’t show. 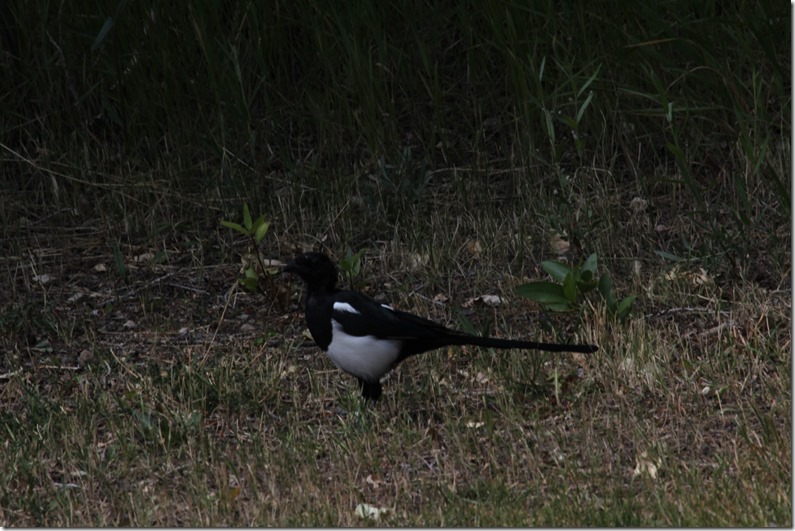 Then it was time for the second ride. Jerrica took me solo on this ride since Tommy was taking the others up the mountain and on the path we had taken that morning. Jerrica was nice enough to pick up a couple of rocks, too, and we saw the other riders on the mountain from a distance. 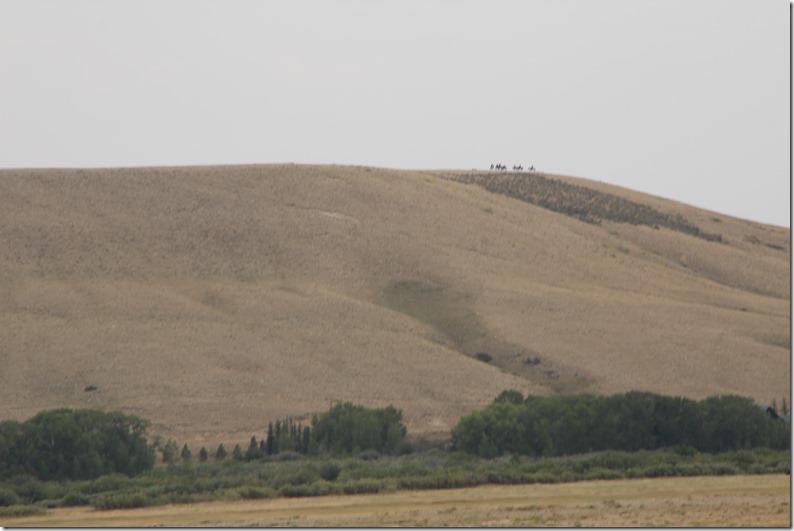 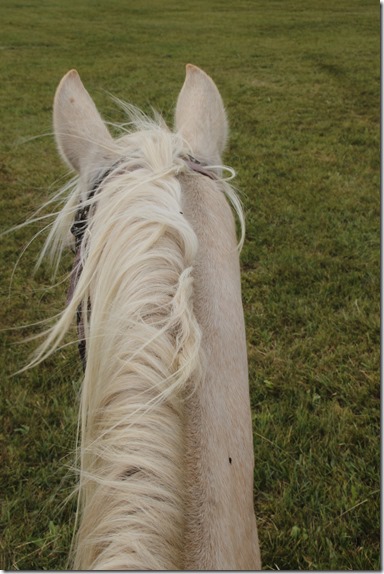 When the second ride was over, it was time for the wagon ride, complete with draft horses and musicians. The wranglers and Brent and Kari’s daughter Bailey rode along on their horses and everyone had a fun time. 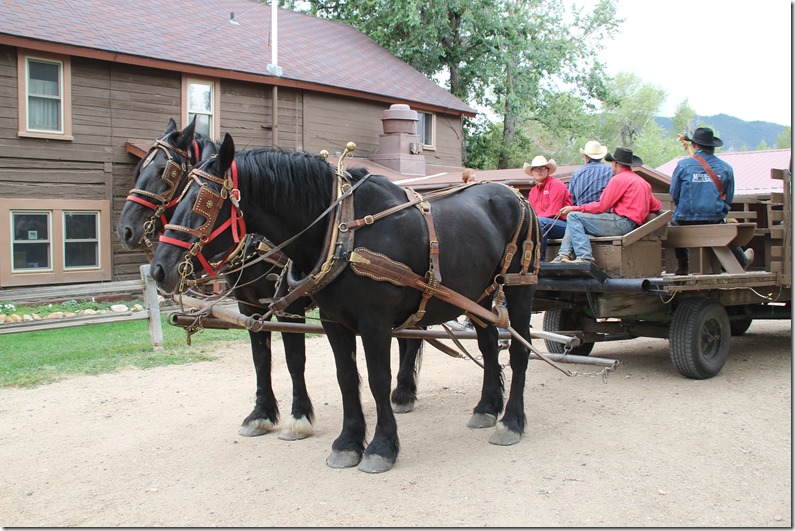 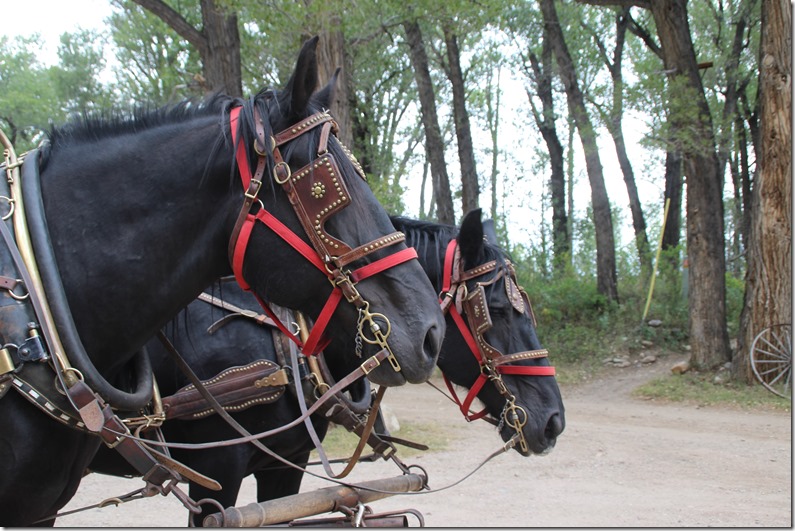 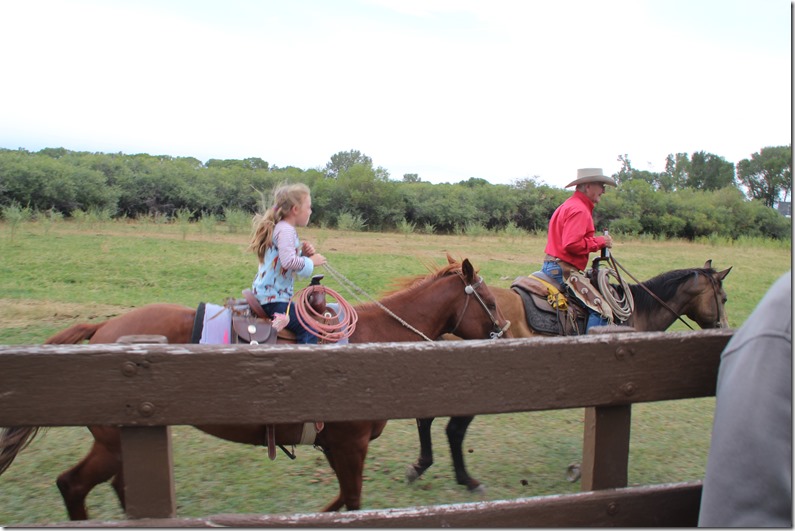 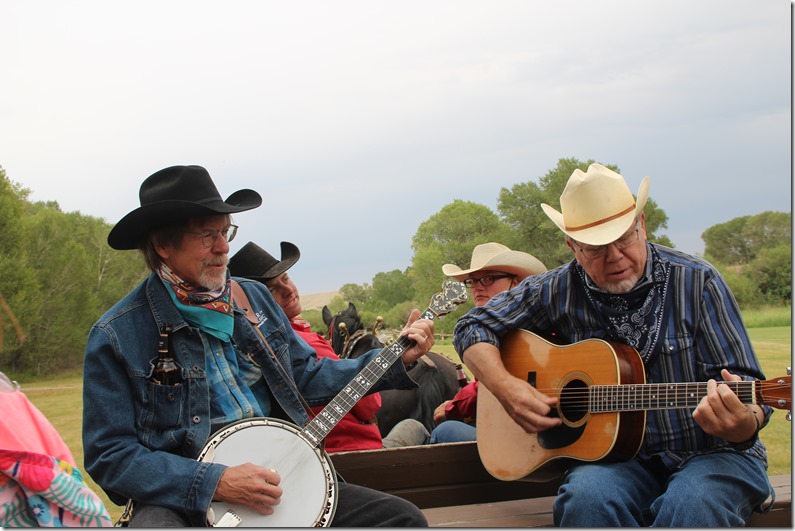 Supper was a cook-out on what they call the island, a parcel of land kind of surrounded by the river. The musicians came and played there, too, and we visited with Mark and Erica, newlyweds just arrived from Kansas. 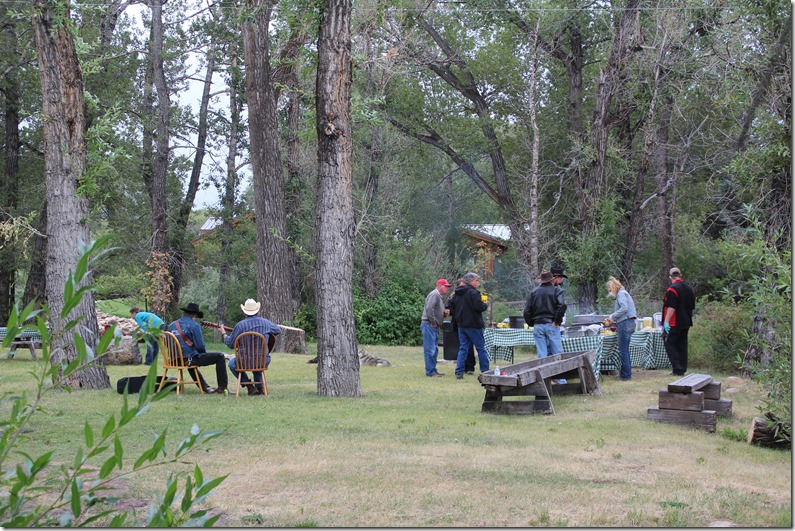 I’m not sure if these are woodpeckers or not, but they look like they might be, and they were more cooperative than the magpies. However, a reader identified them for me as Belted Kingfishers, and that looks right now that I think about it. Thanks, Katherine. 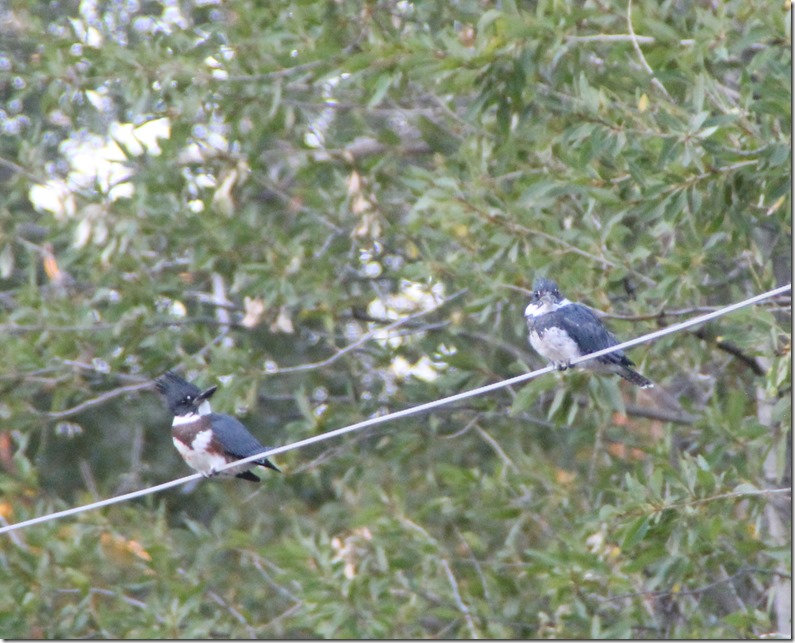 This ended a full day, and since the wind had picked up, I was cold and decided it was time to say goodnight.

Tomorrow will be another day of riding and seeing another bit of unexpected wildlife. You’ll have to read the next installment to find out what we were fortunate enough to slip up on without scaring him off.