A Vitamind to Live By

More times than I can count, I have watched this scenario:  young males pushing  through doors or walking down an aisle or sidewalk followed by a girl friend, sister, maybe even his mother, meekly following behind  as best they can and obediently following him in to their destination.

My husband, on the other hand, from the beginning of our first date, has always opened doors and stepped aside as I walked through the door, or stepped aside and let me take the lead down an aisle or sidewalk.  He even does this as we leave our house, walking out to the car. I always appreciate this act of respect and politeness to me.

I do remember when feminism was new and defiant that some women took this courtesy as some sort of a put-down on them. I am all for women’s equal rights, but it could be men opening doors for women was a victim of feminism run amok. I wonder if this act of manners is no longer taught to boys because of this attitude, or just simply not taught anymore, like other polite behavior that has disappeared.  And that’s a shame.

This reminded me of a vitamind I would post on the bulletin board when I was teaching. A vitamind, by the way, is a positive saying that serves as a vitamin for your mind, according to Zig Ziglar. 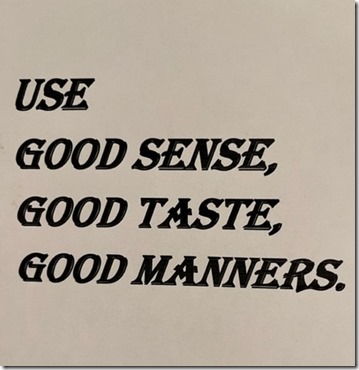 Good sense, good manners, and good taste seem to be in short supply these days, and I see examples where one or the other of these nouns overlap and could describe the same act of questionable or unacceptable behavior. Driving while intoxicated, I think, would be a definite example of not using good sense. But other situations aren’t so clearly defined.

Everyone is entitled to their own opinion, and I have no problem with someone expressing their dislike of any politician, but surely there is a better and less offensive way to do that than plastering a bumper sticker of obscenities on a vehicle. That bad behavior could be an example not using any of these three suggestions!

I know that taste, good or bad, is somewhat subjective, but sometimes things are just not right, like wearing inappropriate clothing in certain situations or clothing that has something offensive written on it, or saying something hurtful or unnecessary.

For me, a good example of not using good manners and being rude these days, thanks to smart phones, is playing with your phone when someone is trying to carry on a conversation with you, or talking on your cell phone in a voice so loud that people in the next room can’t miss the conversation.

I could go on, but young readers will just say I am being an old fuddy-duddy and others will say I am overreacting. Good sense, aka common sense, good taste, and good manners may be viewed  by some as old-fashioned or not relevant today, but they are still important.

And in your heart of hearts, you know that.