I taught a high school leadership class for several years, and every day I posted what Zig Ziglar called a vitamind, a positive saying that served as a vitamin for the mind, if you will.  We of the older generation grew up with these maxims, proverbs, and such, things like The hardest lesson in life to learn is which bridges to cross and which bridges to burn; What doesn’t kill you makes you stronger, and Seven times down; eight times up, as well as old standards like A penny saved is a penny earned. Or even pithy sayings pulled from song lyrics, like when Bonnie Raitt sings  Life gets precious when there’s less of it to waste. 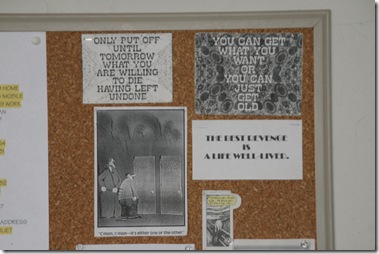 Today’s students aren’t well versed in these sayings. I had a file full of them and the kids would bring them in from time to time to share with me. One day this one appeared on my desk: ONLY PUT OFF UNTIL TOMORROW  WHAT YOU ARE WILLING TO DIE HAVING LEFT UNDONE.

Hmmm, a blunt and precisely worded vitamind, but one that cut right to the heart of the matter. Only put off what you are willing to die and leave unfinished, because, as you have heard before, probably in some form of a vitamind, we really don’t know what tomorrow-or the next minute-will bring. I don’t know about you, but I can think of a few projects that I really wouldn’t mind leaving undone, things like dusting, cleaning out that hall closet, balancing the checkbook-no, wait, that one I think I probably should do.

But others deserve immediate attention, the ones like calling the friend drifted away from and missed, writing a sympathy card to the family who lost a loved one, congratulating a former student on an accomplishment, actually going to visit an old friend instead of just talking about it, writing down the family history so the kids will have it when no one is around to tell them about it, identifying the relatives in old family pictures, visiting someone who is alone, taking a long dreamed-about trip, telling people they are loved and valued, hugging children and grandchildren and anyone in need of a hug, fulfilling a dream once desired but put on the back burner. Fill in the blank with all those things you intended to do that have paved that road to Hell. You know the ones.

So think about it. Leave no unfinished important business; have no regrets. Or to paraphrase another vitamind, Seize the opportunity.