The Chamber Banquet was a Bit Different this Year

Muleshoe Chamber of Commerce and Agriculture  manager Brittany Pendley and her directors decided to change things up a bit this year at the annual chamber banquet. Several comments that surfaced from a survey after the last banquet mentioned not having the usual speaker and doing something else. So this year the banquet was moved to the Desert Rose for dinner, awards, and a dance. 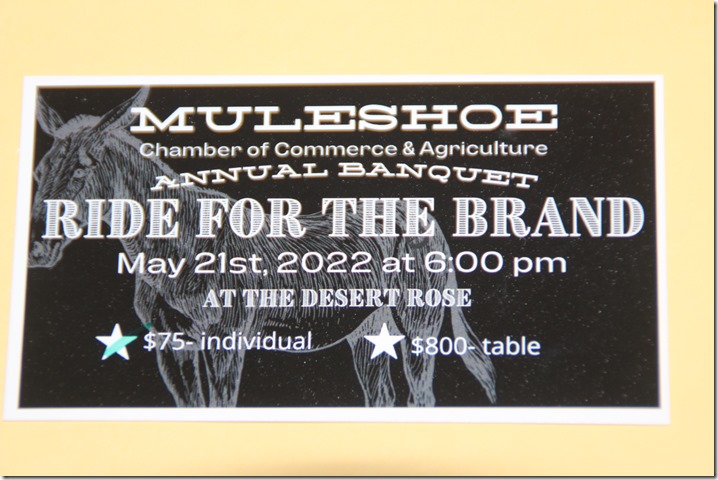 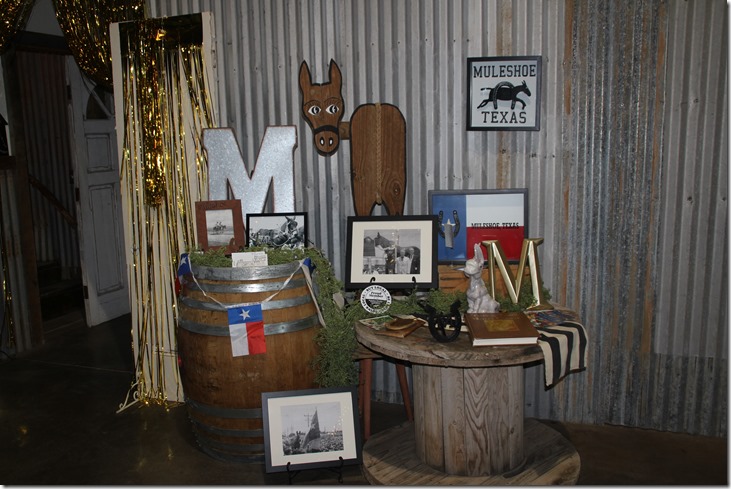 After a time for greeting and visiting, we were instructed to be seated at our assigned tables which were already set with the salad and dessert of caramel cheesecake. Table numbers were then called out and guests were served their plates in timely fashion from the kitchen window, a lovely meal of beef and chicken kabobs and New Orleans potatoes. all prepared by Honey Do Barbecue, owned by Michael and Denise Dunham.

The program began with a welcome from Brittany, an invocation by Muleshoe ISD Superintendent R.L. Richards, and recognition by Brittany of a group of individuals and businesses who helped make the night happen. Those thanked included the Desert Rose, Michael and Denise Dunham, Xcel Energy, Bubba Bellin, Jade Jypsy, Thirsty Mule, Terry Brewster, Gil Rennels, Louie Pacheco, and Jarrod Vinson. 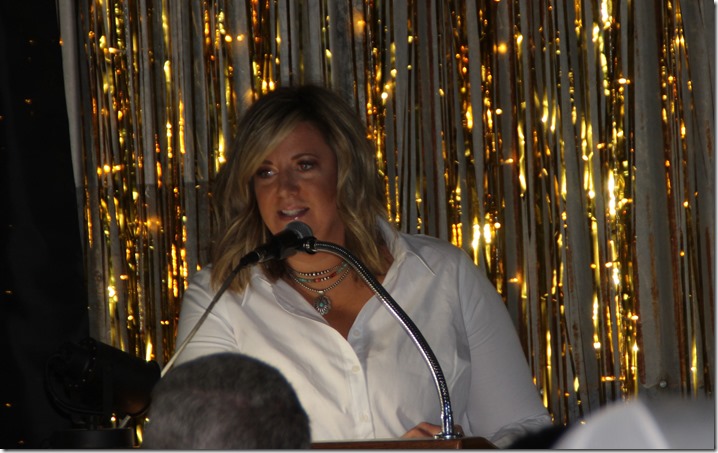 Brittany also introduced the Chamber Board of Directors who would also be presenting the awards during the program. John Villalba is President, Kari Preston is Vice-President, Londi Blackwell is Secretary, with board members Jackson Myers, Kamry Cribbs, Markus Stephens, and Myles James.

President Villalba gave a short speech on the importance of brands in the early ranching days and why it was picked as the theme of this year’s banquet. 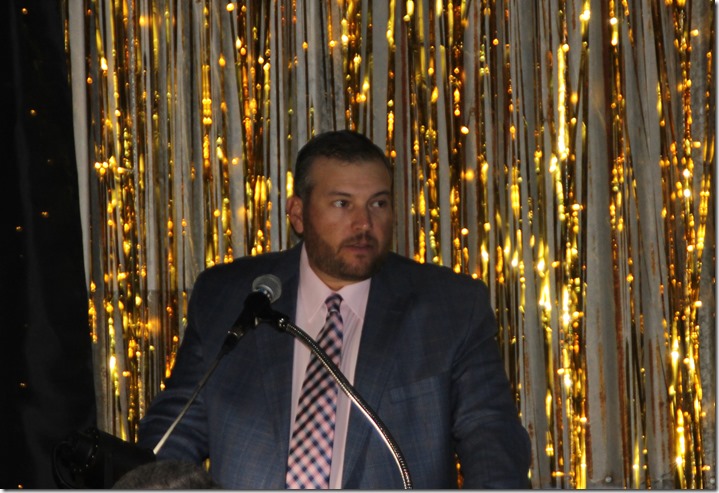 Scott Miller, representing the Muleshoe Lions Club, then made a special presentation to recognize Dr. Jerry Redwine who has made eye exams available at no charge to Muleshoe children who might need assistance with corrective eyewear. For the last four years Dr. Redwine has administered  eye exams that the Lions Club then uses to properly fit children in need of glasses. 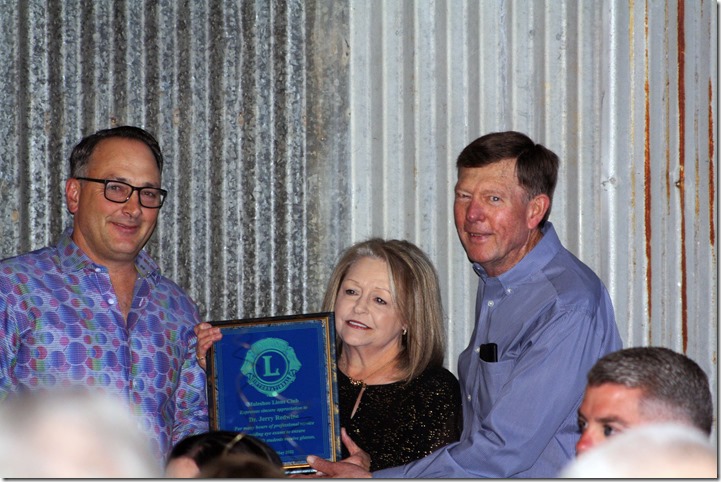 One reason the banquet is held each year is to recognize community members who have made an impact on Bailey County and Muleshoe in various ways. This year board members wanted to recognize not just the winners but all who were nominated. So at the beginning of each award, Louie Pacheco, who served as the night’s master of ceremonies, announced all who were nominated in each category and asked them to stand. 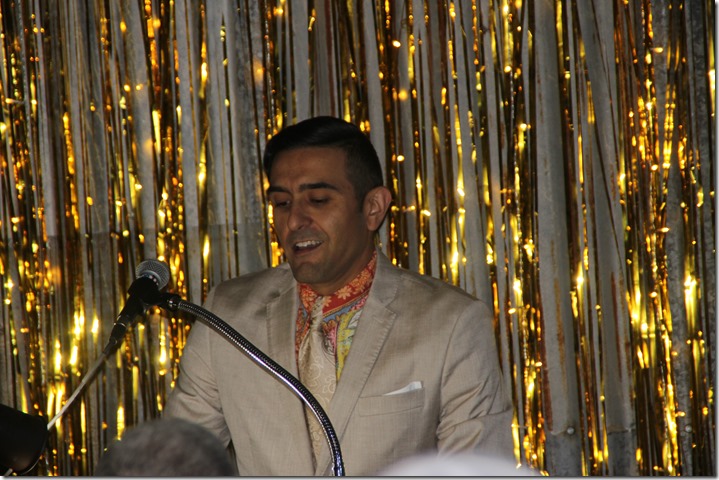 Man of the Year nominees included Richard Wills, Kenneth Henry, and winner Chris Mardis. The award was presented by board member Myles James. 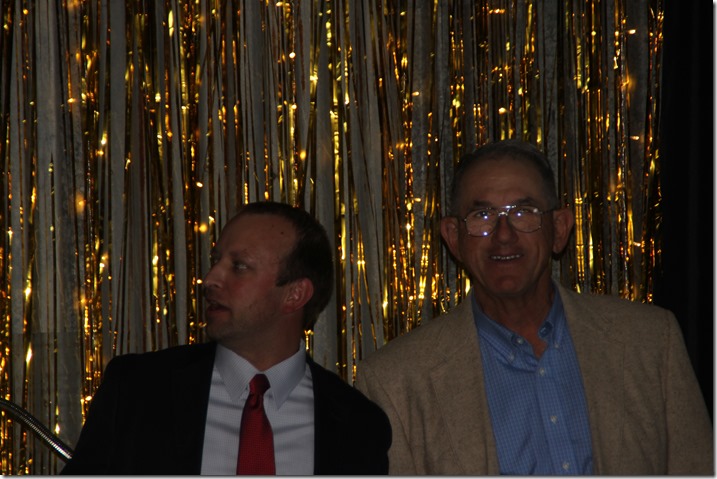 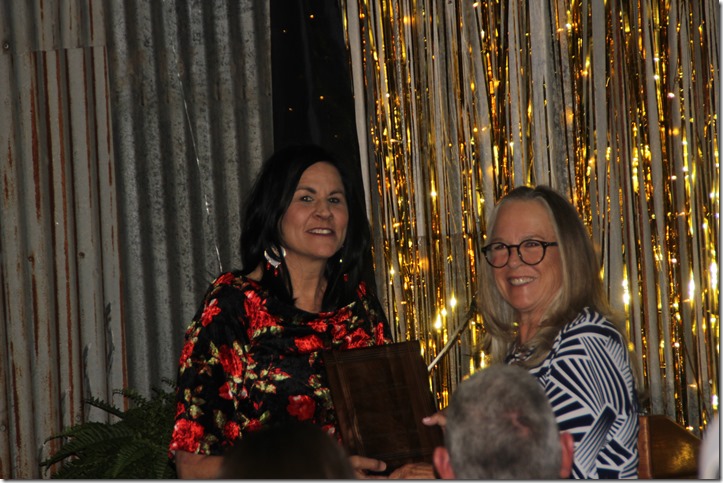 Youth of the Year nominees were Makayla KIrven, Emma Gallman, and winner Kaitlyn Hart. The presentation was made by Kamry Cribbs. 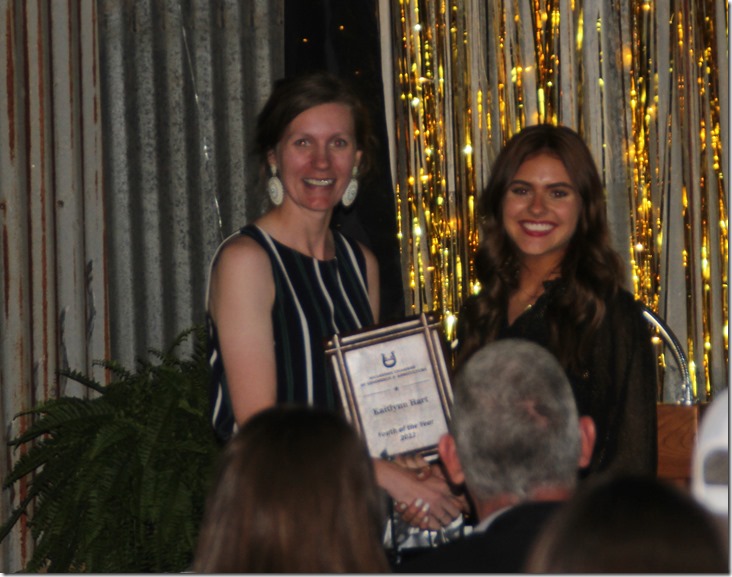 Business of the Year nominees were Lifestyle Nutrition, Jade Jypsy, All Star Detailing, Eevolve, L&L Pallet, and the winner The Ballet Shoe, owned by Dan and Leslie Borwick with the presentation made by Londi Blackwell. 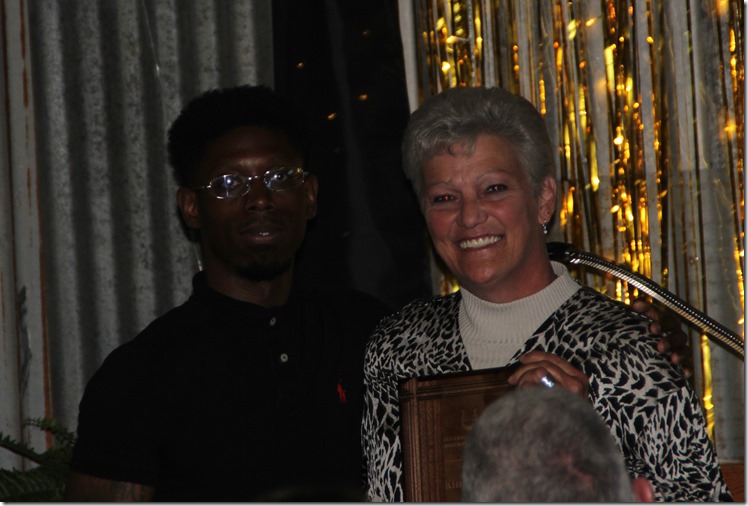 The Ag Family of the Year nominees were Landon NIchols, Joel and Madeline Hettinga, Burch Family Vineyards, Kyle and Molly Stancell, and winners Robert and Ellen Gallman. The award was presented by Jackson Myers. 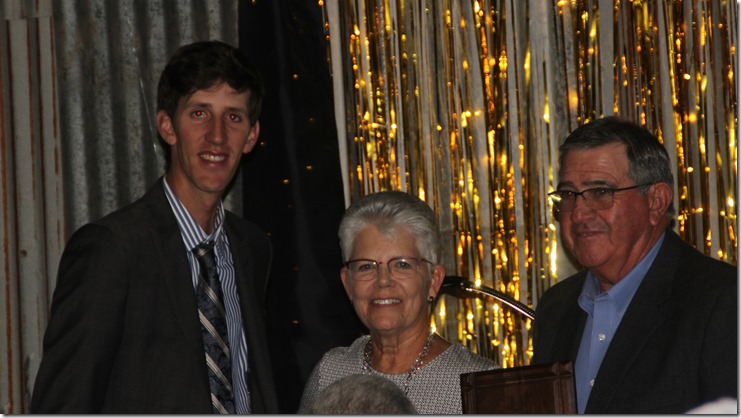 Something else different to the banquet this year providing a tie-in to the Ride for the Brand theme and funding for the recently established chamber scholarship program was the first auction for the Muleshoe branding iron made by Jarrod Vinson.  The person who makes the last bid doesn’t really own the brand, but will enjoy displaying it for the coming year and then return it to the chamber to be auctioned off again the next year. Thurmond Myers was the auctioneer and Jackson Myers spotted the bids. 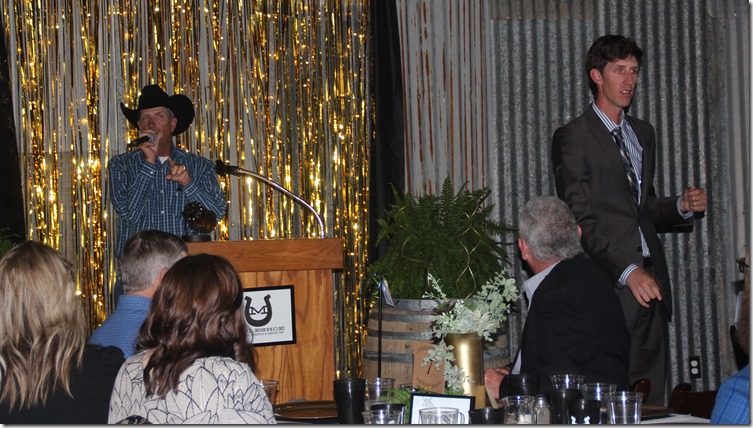 The final bidding came down to a battle between Starla Ellis and son Colt, and when he signaled the last bid of $3,000 to Jackson, Mom gleefully pointed at him and said, “He can have it!” 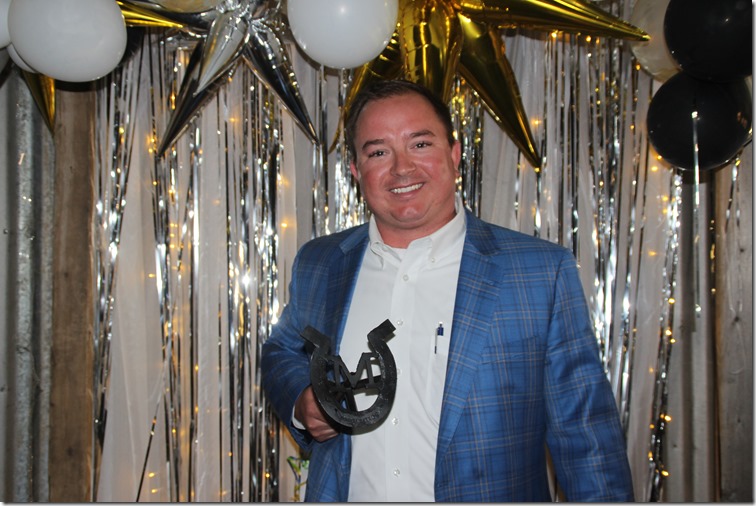 And with that, the banquet was officially over and it was time for the dance with the Bubba Bellin band out of Fort Worth. 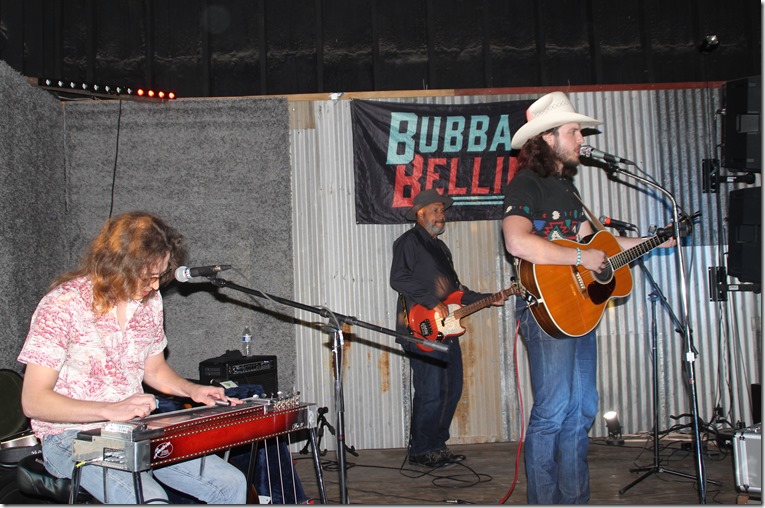 I’d say the night was a success and would encourage you to attend next year. 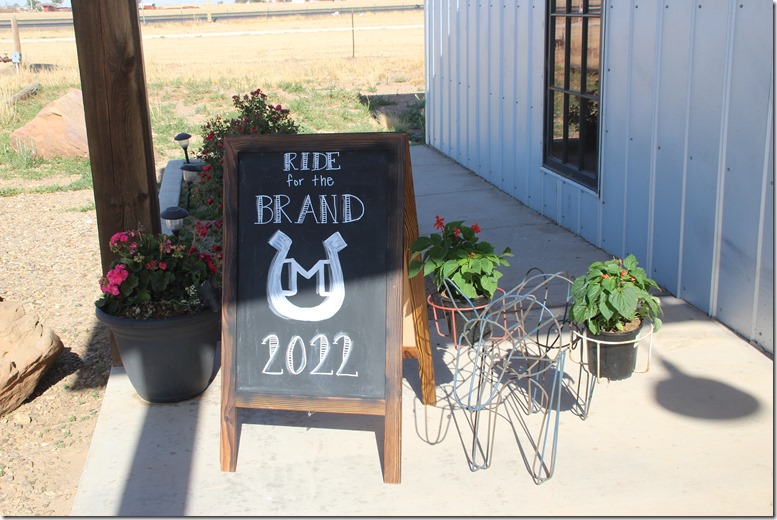