San Francisco, the Surf Motel, and the Wake-Up Call

When Caroline graduated from Muleshoe High School in 1988, her dad suggested we take a celebratory graduation trip to San Francisco. I have forgotten many of the details after all these years, and my photography skills and choices of shots were a work in progress back then, but one memory has survived the test of time. 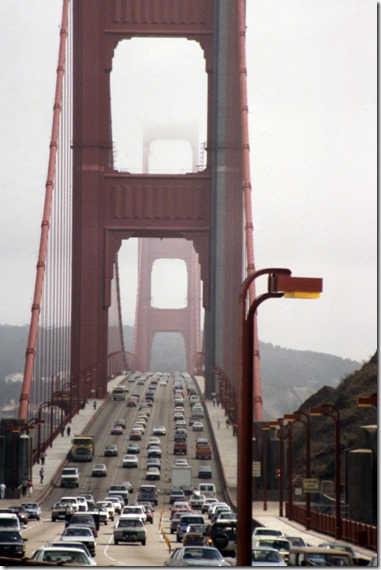 Bill made reservations for us at one of the high-end luxury hotels either on or near Fisherman’s Wharf, all shiny brass and giant mirrors, doormen, valets, the whole deal. Remember this for later in the story.

We rented a car. I drove, and Caroline did a great job navigating-with a city map and a state map, no GPS, thank you very much! We made all the typical tourist stops, not necessarily in this order: Fisherman’s Wharf, Chinatown, Alcatraz, Lombard Street, Golden Gate Park, a drive down Haight-Ashbury Street looking for hippies-all gone, of course-, Ghirardelli Square, Golden Gate Bridge. We fed the seals on the wharf, only to have a sea gull swoop down and take the seal treat right out of Caroline’s hand, rode the trolley cars, found a fancy Ferrari dealership in a lovely old house with a fancy double staircase. We drove down to Carmel, passed by Fort Ord where Bill did his basic and infantry training, stopped to check out fields of unfamiliar vegetables like artichokes, visited the Monterey Bay Aquarium, saw Cannery Row, and did a fair amount of shopping. 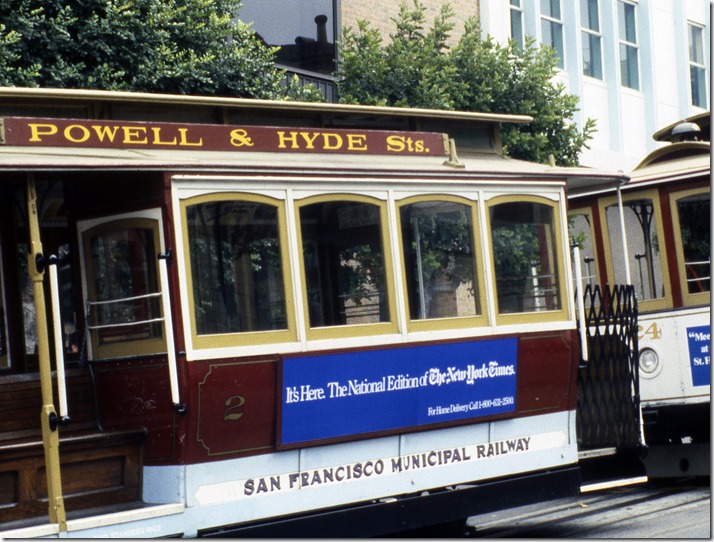 And then the last day we were there, Bill called and strongly suggested we find a less expensive place to stay to save some money. I should have known better, because instead of enjoying the city, we drove around most of the day looking for a decent place to stay that had a vacancy. Rooms were hard to find, as all kinds of events were happening in the big city for which people had made their reservations ahead of time.

At some point on the straight part of Lombard Street we passed a Surf Motel with a vacancy sign lit up. As a last resort, we pulled in and took a room. We would be leaving the next morning, so naturally we had to get up early to make to the airport in time for our flight. As I recall we had to make it across another bridge to Oakland International Airport, which meant we needed to get up at 3 a.m. to make sure we made it on time.

I asked the woman behind the counter if we could  have a wake-up call at 3. She looked at me for a moment, bent down and reached under the counter and and handed me a traditional old alarm clock, round face with two flat, round bells on the top of the clock! After I brief awkward moment of hesitation, I took the clock. I’m not even sure she made sure I knew how to set it, but off we went to our room.

Now, remember, we had just spent several days in that plush, spacious big city hotel with nice speedy elevators full of sparking mirrors and polished brass. We walked to the Surf Motel elevator that was barely big enough for both of us to ride at one time, and we weren’t real confident it could haul us up the second floor. The door closed, and we surveyed the inside walls covered with less than new indoor-outdoor carpet. 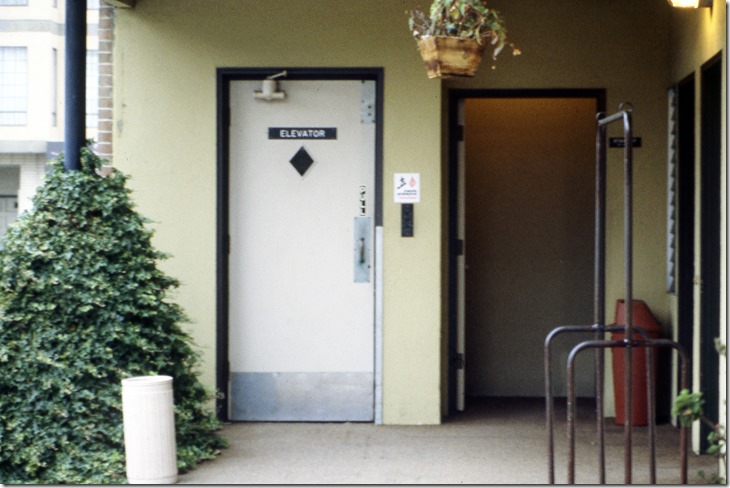 After a few tense minutes, we arrived on the second floor, the space underneath being used as parking for customers’ cars. There was no enclosed hall; we walked on an open hallway or porch to our room, opened the door, and walked into a functional but very plain room.

We both stood there for a minute, looked at each other, and then flopped down on the one bed, laughing hysterically! We gave up our fancy room for this!? I have no idea now what the fancy room cost and what we paid at the Surf, but I assure  you it was false economy for a day lost looking for it and the one night stay. The bedspread was a bit threadbare; the the windows had shutters that didn’t block out the light or outside traffic noise; the walls were decorated with cheap plaster of Paris pieces. Oh my!

I stayed awake most of the night, fearful that vintage alarm clock wouldn’t go off, tossed and turned and watched the clock.  I remember going over the Oakland Bridge, and we made it to our flight and gave Bill an earful about his money-saving suggestion when we got home.

It was a heck of a trip full of good memories and experiences, but that’s not what gets talked about when we relive the trip. The Surf Motel is. But that’s okay. Memories are fun, and we definitely won’t forget that one.

Now, to be fair to the Surf Motel, here’s the rest of the story. On a whim, I googled Surf Motel, San Francisco, and guess what? It is still standing and going strong! I couldn’t believe it. We were there in 1988, thirty-four years ago, and I don’t think it was new then. I have no idea when it was built, but it really could have dated back to the early days of motels in the 50s or 60s. I also googled the history of motels, which went back even farther than the 50s, back to the early 1900s when transportation was all about trains. When cars became affordable with the Model T, people started traveling where trains did not necessarily take them, and they would camp out on the side of the roads. Auto camps began to spring up as sort of a group camping experience.

WW II interrupted this form of travel when gas was rationed and men were fighting the war. After 1945, however, travel took off again and mom and pop rental establishments sprang up for these travelers to now stay in. The term motel was coined by the owners of the Milestone Mo-Tel, short for motor hotel, in San Luis Obispo, California, and quickly became the label for these room and board-type places. By the 60s after the interstate highway system was finished, chain motels began to replace the individually owned motels and were seen as dependable, predictable places for lodging, and the family-owned motels faded away for the most part.

So I am thinking that the Surf Motel is a holdover from the early days of family motel businesses. I was told that the current owners date back twenty-five years and that the motel was used to house homeless people during the outbreak of Covid. The building suffered some misuse during that time and has been cleaned up, newly painted, refurbished, and ready to provide rooms at its still modest prices. If you check it out online, the rooms look nice and nothing like what we saw as we opened the door that day. The building itself still looks the same;  the elevator is still in the same place, but I suspect is different on the inside.

If you take a trip to San Francisco now and are looking for affordable, clean lodging, the Surf Motel might be an option, just without the same experience Caroline and I had. 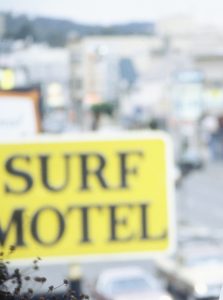 But we  will always have the Surf Motel.