The Cactus and Succulent Society of America (CSSA) held its biennial conference in July of 2019 in San Luis Obispo, California. Dudleyas are native to southern California, Guadalupe Island, and in the Baja area of Mexico and California. They love the Mediterranean climate typical of southern California and grow wild there. I had heard of them, but never had one since we certainly don’t enjoy a Mediterranean climate in Muleshoe.

But I came home from the conference with a small one from a California nursery and have managed to convince it to grow and thrive in our less than ideal climate! 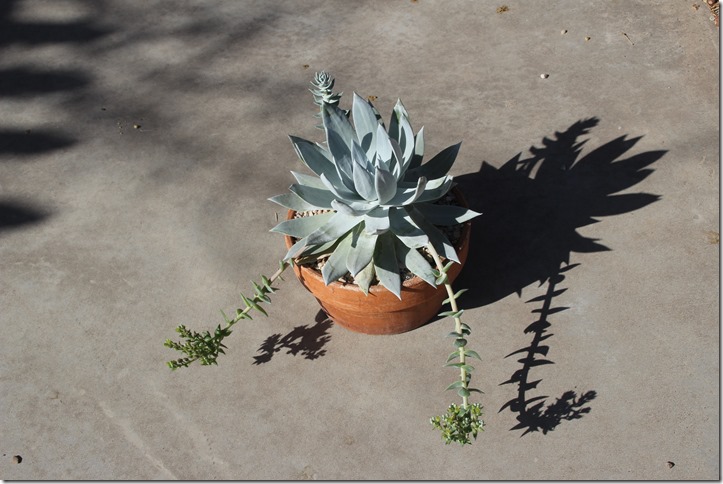 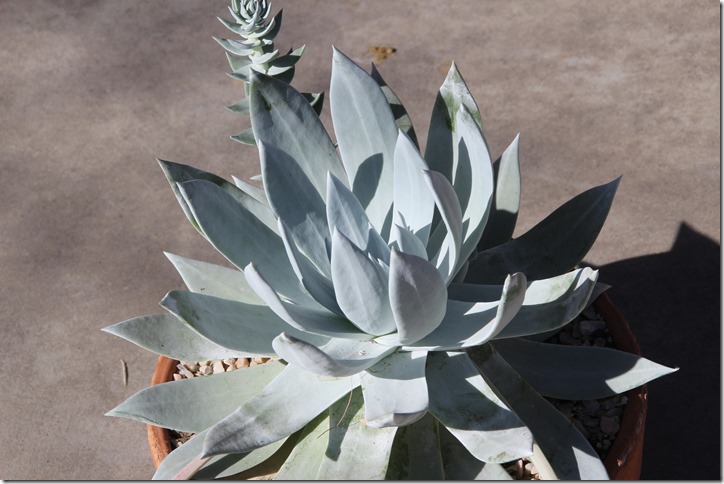 In fact, it has been happy enough to bloom twice for me, as you can see here. The flowers on some dudleyas are more impressive than this, are a bit larger and have more color, but really, what I like about this particular one, Dudleya pulverulenta, is that soft gray/blue color of the plant. 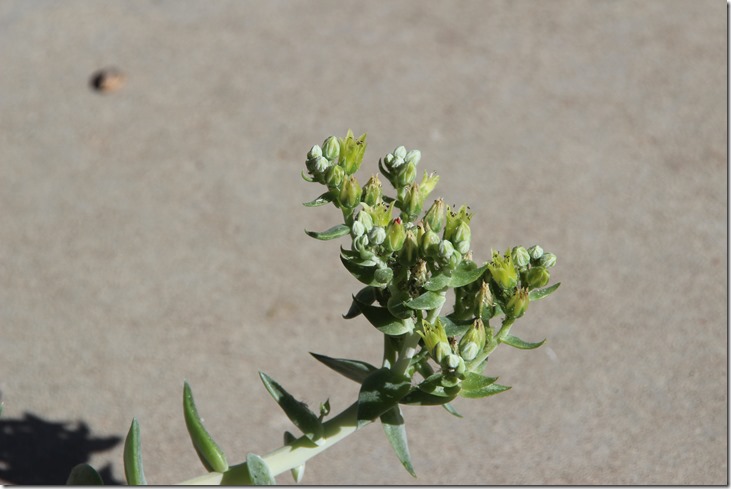 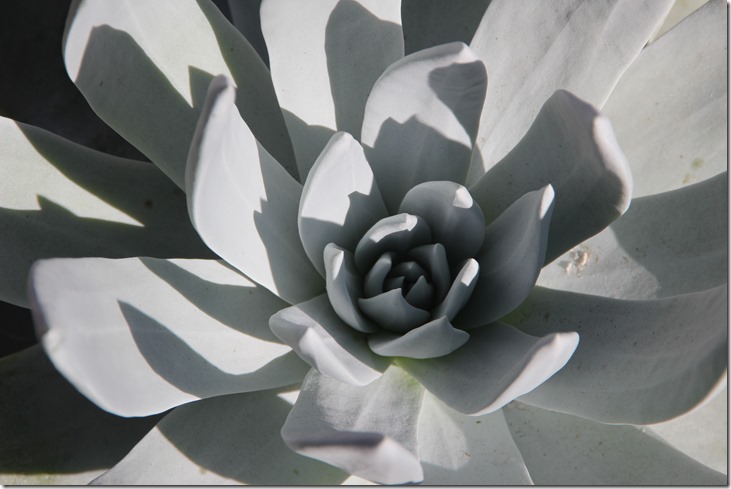 The most famous feature of this variety and several others in the species is the waxy coating on these gray/blue leaves, epicuticular wax, which creates a protective surface on the plant that has some of the highest ultraviolet reflectivity found in plants. This ultraviolet reflectivity, of course, is protection for the plant from the sun, but I have never tested it in full sunshine here for fear that, in spite of all that protection, it would get sunburned, and it would be my fault! I make it a point not to touch the leaves because the wax is sort of chalky and fingerprints remain on the leaves. In person you can see that chalky finish; pictures do not do the plant justice. The plant is sometimes chalky lettuce because of the chalky wax. Some other species have a clear, sticky coating which allows dust to adhere to the sticky leaves. coating the foliage and protecting the plant.

Dudleya pulverulenta is one of the larger species. When I brought it home, it was just a little starter plant, and it is now ten inches in diameter and may get larger. We took a field trip at the conference to see these plants in habitat, and the ones we saw had erect stems with brighter-colored flowers, but the plants were much smaller, about four to six inches in diameter.

Dudleyas are very popular in California and poachers are taking advantage of that popularity and digging up species found in habitat by the truckload to sell locally and online internationally at obscene prices. And they are doing this to the point of endangering the existence of the species, as they leave none to reproduce. This is happening with other cactus and succulents as well. I feel confident mine was a nursery-grown legal seedling because it was in a flat with others of the same uniform size and shape, an indication they were from the same batch of germinated seeds propagated by a reputable dealer. If you are interested in this plant, only purchase from a reputable nursery, and be especially skeptical of dealers online, as that is where the majority of poached plants are sold. If these people can make no money selling poached plants, perhaps eventually they will stop before the endangered plants become extinct and disappear completely in habitat.

My plant has sent out what looks like an offshoot that I can cut off and root, but the literature says these little starts don’t always root. It may also just be another batch of flowers, but the flowers on the inflorescences that are blooming now didn’t look quite the same when they appeared, so I am hoping this will become another plant. Time will tell. 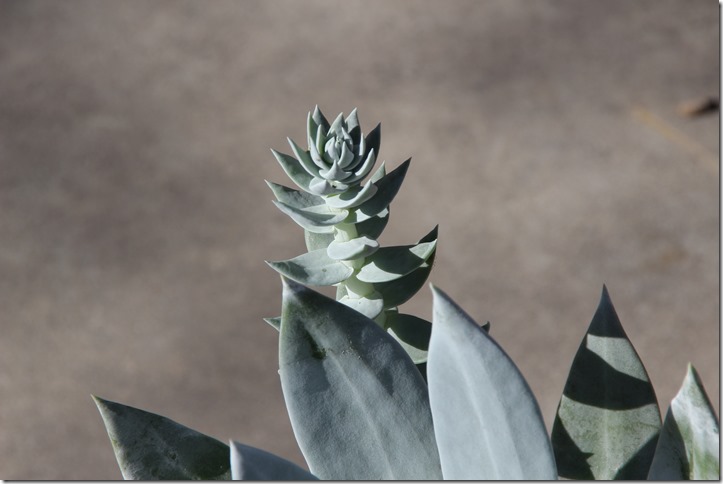 If you do decide to add a dudleya to your collection, try to mimic its preferred climate, which is a hot, dry summer and a mild winter with low rainfall. Nearly all species are not cold-hardy and need protection in winter. Water your plant from fall to early spring frequently, which will produce growth and flowers. Then don’t water so much from late spring through the summer and into fall, as the plant is dormant then. It still needs some water, but maybe only about every two weeks. Don’t water from directly above the plant as that can damage the wax on the leaves and will discolor it. Somehow when it gets rained on and watered naturally, that is not so much of a problem. Or at least it seems to work that way! Don’t let water stand in the center of the rosette, either, as that can rot the plant.  I water mine carefully pointing the spout of my watering can on its soil under the lowest leaves. 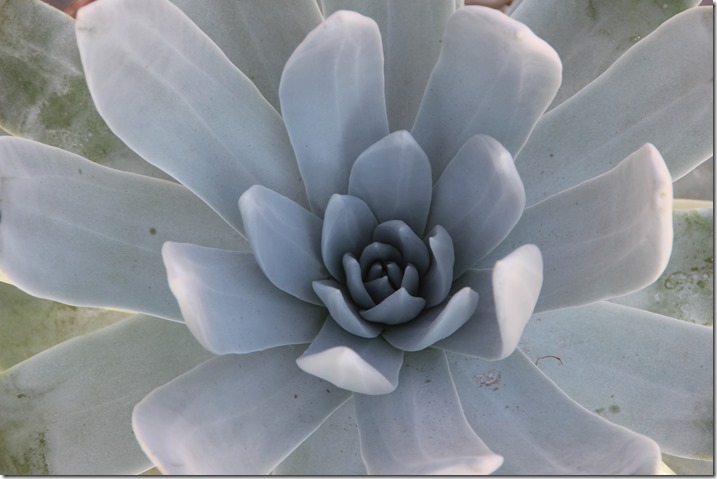 So that last paragraph may make you not want one these plants! It’s a bit more trouble than most succulents, I guess, but well worth the effort. I have been excited that I have managed to keep mine happy and growing so far away from California. The literature says they can live a very long time, some even up to a hundred years, hence the other common name, liveforever plant. So we’ll see how long this one will be with me. 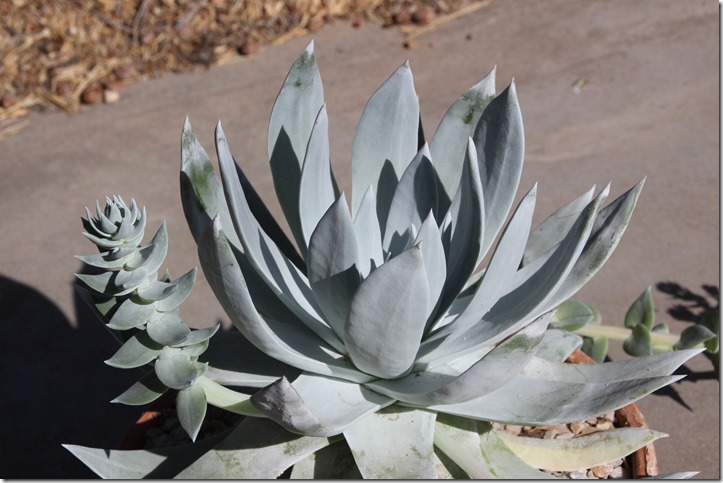 Who knows? At my age, it might even outlive me. What a deal!