On most Sundays at First Methodist Church in Muleshoe, I sing along with the organ music played by Marshall Cook. 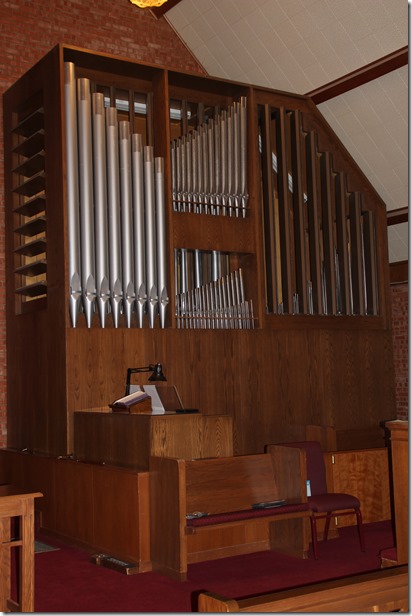 The same hands that play that organ hand-crafted the communion table that holds the elements of the Last Supper when I take communion. 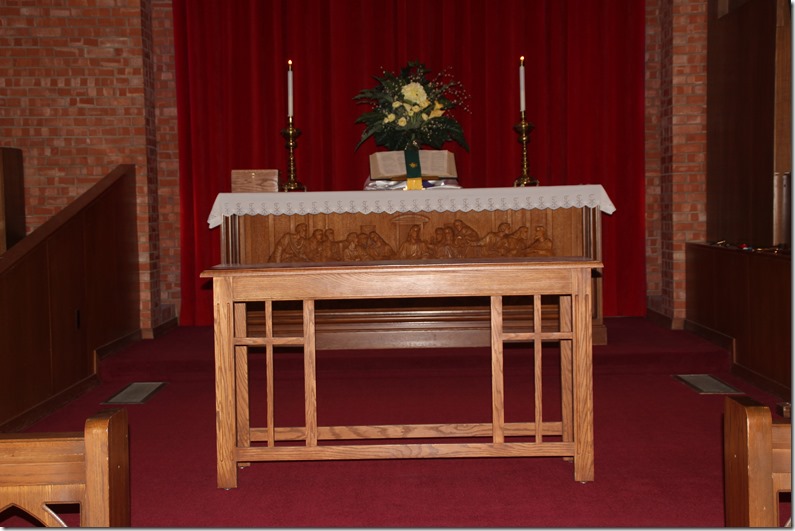 And that’s not all those hands can do;  you should see the lovely yard he and wife Helen nurture and enjoy. 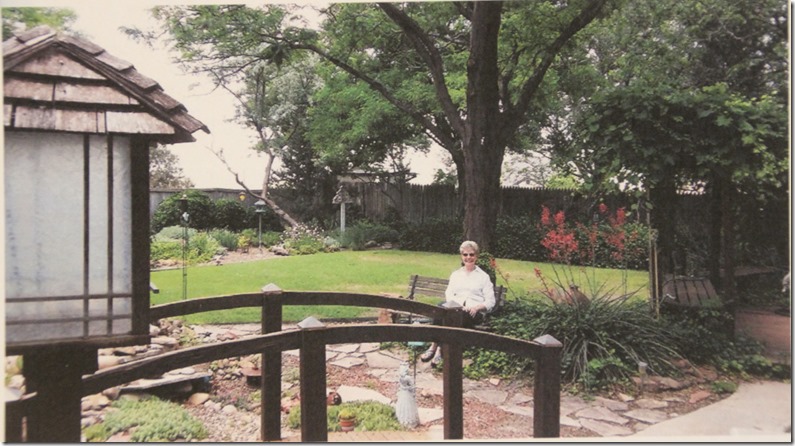 How many people do you know that have a landscaped alley behind their backyard? Well, Marshall does. 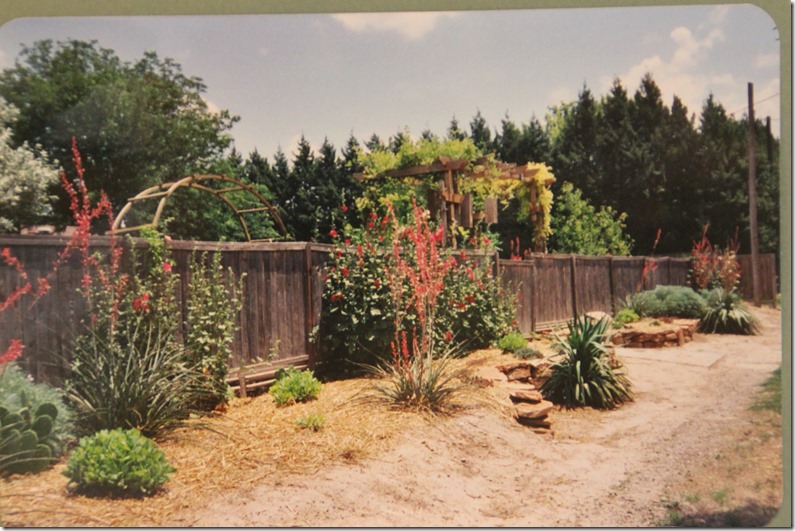 But then, Marshall’s been busy all his life, a life which started when he was born in 1927 and grew up near Snyder between Dunn and Ira. The family farmed cotton and maize, but also had a few head of Jersey cows that gave them enough milk for cream to trade for groceries. It was the Depression, remember, and putting food on the table was critical, and trading goods was one way to do that.  His job as a very young boy early every morning in the dark was to round up the calves in the pasture so they could nurse a bit before their mamas were milked enough to supply the cream for trading. Then the cows were put out to pasture and the calves were kept in the pen for the day; then at the evening milking , the process was repeated and the cows stayed in the pen and the calves went to the pasture.

From there the family moved to a farm near Colorado City where he graduated in 1944. WWII was still going strong then and Marshall was offered an appointment to West Point. He knew the curriculum focused heavily on math, which was his Achilles’ heel, so he chose to decline the offer and on his seventeenth birthday joined the Army Specialized Reserve Training Program at Texas Technological College, now Texas Tech University. He also took some military training classes that summer. That fall he transferred to New Mexico A&M at Las Cruces.

Unfortunately, the math just got rougher there! He dropped that program, but was eligible to join the Navy and went to boot camp at San Diego, California,  where he attended the Hospital Corps Training School. That led him to the Naval Hospital at Portsmouth, New Hampshire, where he added operating room and anesthesiology training. As it turns out, this medical training put him on a path that led him to a career in anesthesiology and hospital administration, eventually leading him to administrative jobs in Colorado City, Lubbock, Dimmitt, and eventually Muleshoe. 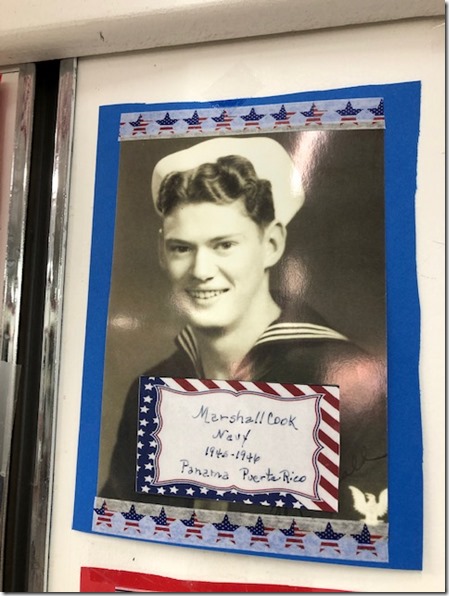 His time in the military also took him to the Panama Canal Zone and San Juan, Puerto Rico, and in 2013 was selected to make one of the South Plains Honor Flights to Washington, DC.

Marshall married Lala Smith in 1946; she died in 1995 after presenting Marshall with three sons, David, James, and Wesley. They lost David in in 1994, but were blessed with four grandchildren from the other two sons.

You have heard than when one door closes, another opens, and this is how Marshall and Helen came to be husband and wife after Lala died.  Dr. James Bell, who was pastor at the Methodist Church then, started an evening Bible study. Unknown to Marshall and Helen,  Dr. Bell made sure that they both knew about the class and insisted they come. Now, it just so happened that Helen lived in an apartment located between Marshall’s house and the church, so of course, the thoughtful thing for Marshall to do was to offer to take Helen to and from the Bible study. He did, she accepted, time passed, one thing led to another, as Marshall put it, and they were married in March of 1997. 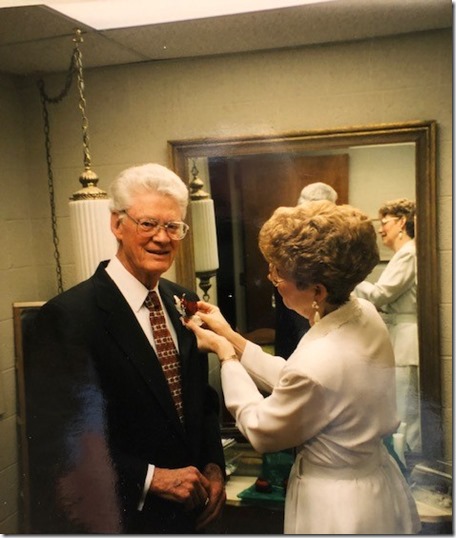 Helen Mitchell was born in Portales, New Mexico, in 1936, and the family lived in Elida, New Mexico, Pettit, Levelland, and eventually wound up in Muleshoe in 1950.  After graduating from Muleshoe High School in 1954, Helen attended Draughns Business College in Lubbock and worked a short time in Lubbock before returning to Muleshoe and working at Muleshoe State Bank for three years and Fry and Cox for six years. She then served as office manager for her brother-in-law Gordon at Wilson Appliance for thirty-nine years. She was in charge of bookkeeping, hiring, contracts, and whatever else was needed. Helen has two children from her previous marriage, Kelly and Karen, who have also blessed the family with five grandchildren. Helen also mentioned her battle with breast cancer in 1995 and how much she appreciated all the help and support she got from friends during that time.

In his younger years Marshall had played the piano for his church. He was mostly self-taught, he said, because he had a good ear for music, which actually made reading music more difficult  because he wanted to play what he heard, not what he read on the sheet music. The pipe organ at First Methodist was bought at the request of Elaine Damron, who taught music and also played the organ at church. At Marshall’s request, Elaine taught him to play. He also studied the organ with church member Jeremy Bruns and a professor at Texas Tech. After Elaine died and Jeremy moved on to play at larger churches, Marshall became the organist at First Methodist in 1991.

Marshall’s hobby of woodworking actually came before he pursued the organ, and examples of his skills are all over town. He said he was mostly self-taught after he bought a table saw and got to work. He did take evening classes at South Plains College with pharmacist Henry Malone from Muleshoe. He said it was gratifying as his skills developed to use them in the pieces he made on request.

Marshall has made many creations  for the church. I mentioned the communion table earlier, but look around and you will see other pieces he has made, like the two kneeling benches in the chapel, a curvy bench in the foyer, plant stands or pedestals, a utilitarian coat rack and shelves in the large workrooms in the church. A simple wooden cross also graces the church kitchen. 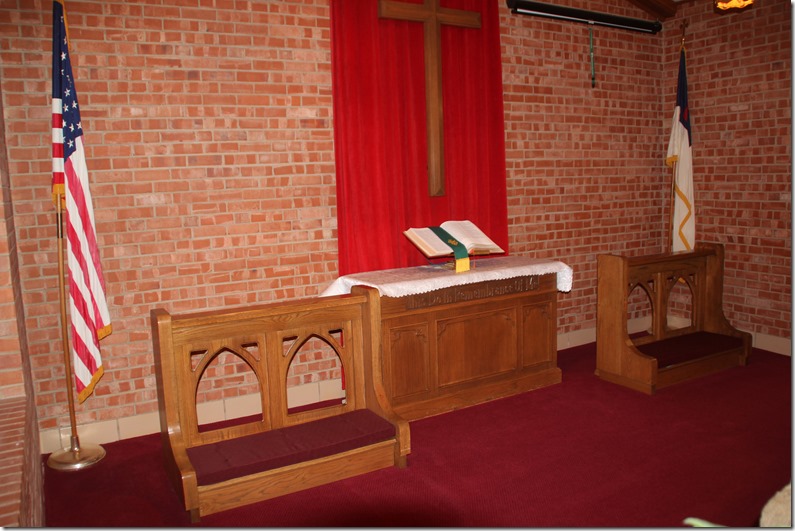 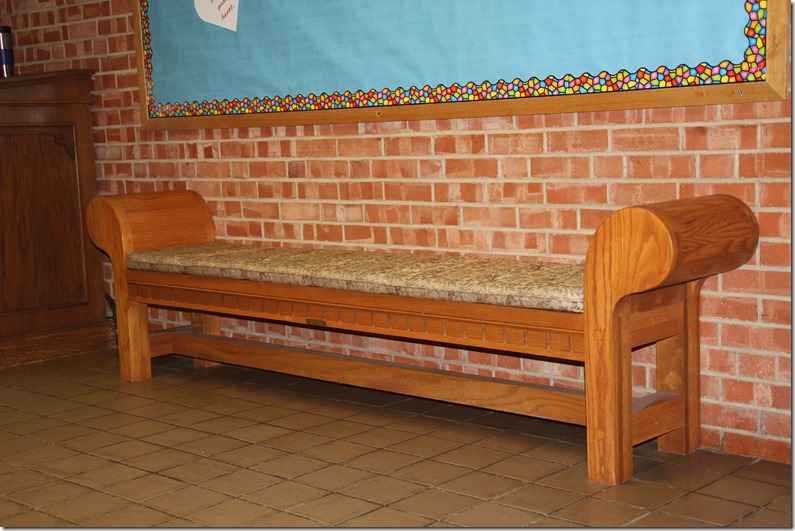 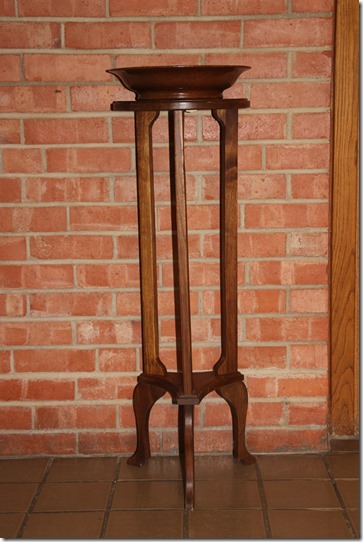 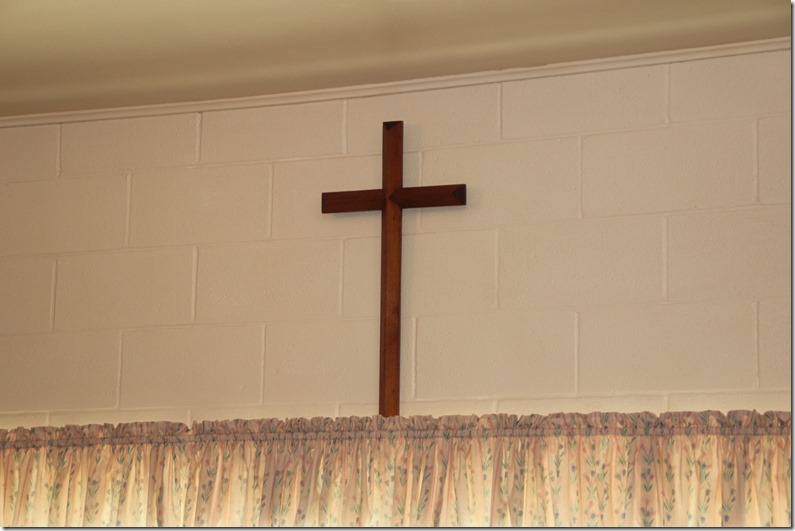 One of the early pieces he made was a cabinet for Helen when they were dating. I noticed it had a small name plate on it. Then when I took the picture of the church bench, I saw one there, too. 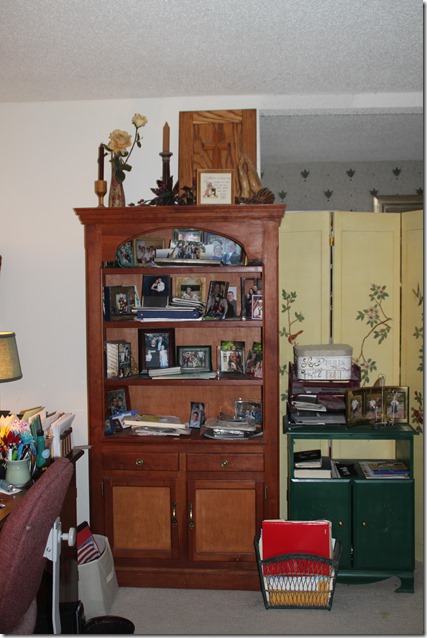 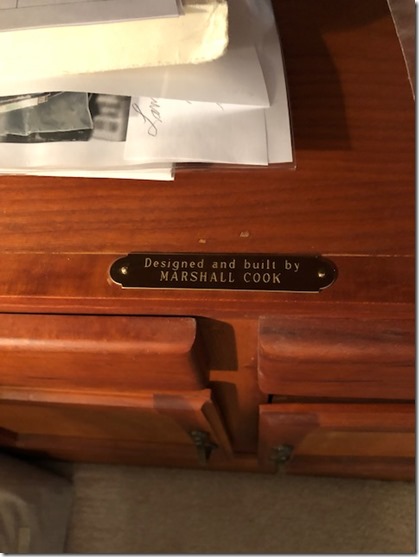 Marshall hasn’t just made things for the church, although that is one of his first loves. He has made pieces for friends and family, toys for the children, podiums for the courtrooms, a podium for the county coliseum, all at no cost to the recipients. He just enjoys doing it. He also built the stairs going up to the entrance at the Santa Fe Depot at the Heritage Center. He didn’t build it, but designed and directed the work on the curved check-out desk at the public library. 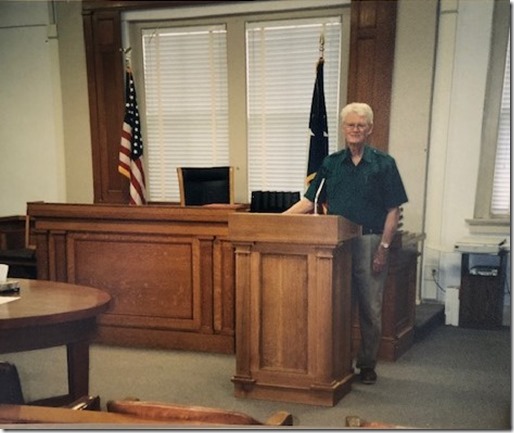 When Marshall and Helen became active at the Oneita Wagnon Senior Center here in Muleshoe, his building skills provided shutters, a storage cabinet, the register booth, and poster case, among other things. He and others worked on a playhouse that was raffled off as a moneymaker for the center. But the most impressive piece at the senior center is in the kitchen where you won’t necessarily see it, a huge work island. For that project, which Marshall said seemed to grow by a foot every time they worked on it, he had enlisted the help of Joe Sowder and Fred Clements. 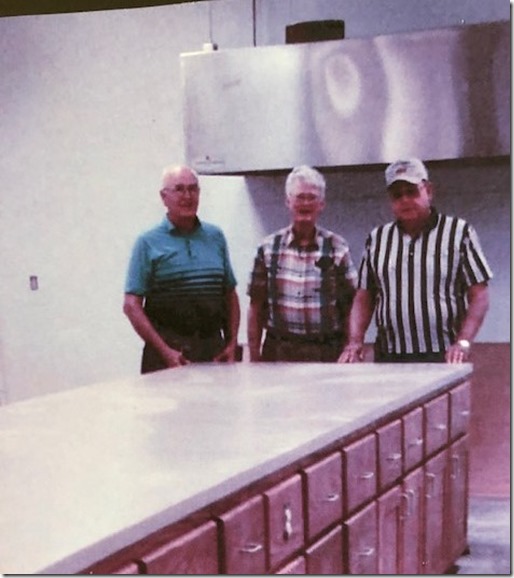 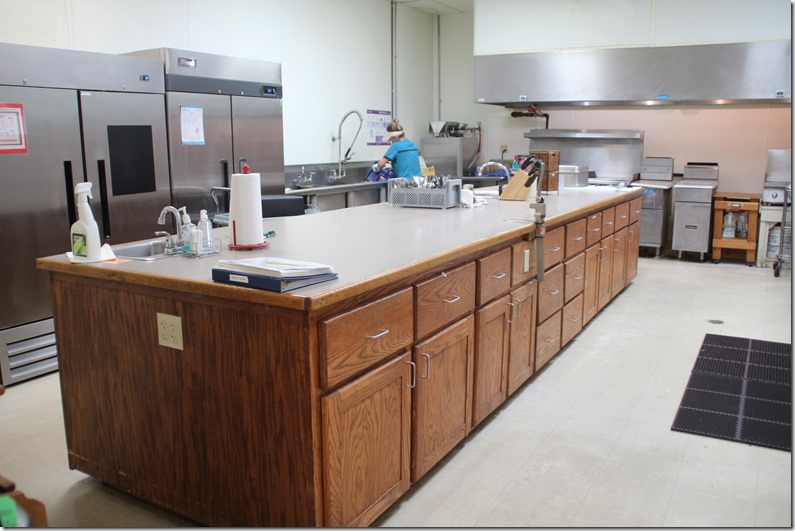 Helen is also active at the senior center where she is on the board of directors and the decorating committee. The board is in charge of fundraising events, and Helen is involved in making those events a success. Evidence of her time decorating is always on display as holidays come and go. She is also instrumental in putting up the pictures in that Wall of Honor where Marshall’s picture can be found.

Marshall’s love of gardening shows up at church, too, where he always seems to be cleaning out beds, weeding, and in the beginning, designing and planting flower beds, or working in the yard at the parsonage.

But as if all that I have already mentioned doesn’t keep them busy, he and Helen also volunteer their time and service to the food pantry and Snack Pak 4 Kids. They are not as young as they used to be, ya know!- and they run circles around the rest of us with their service to the Lord and the community. 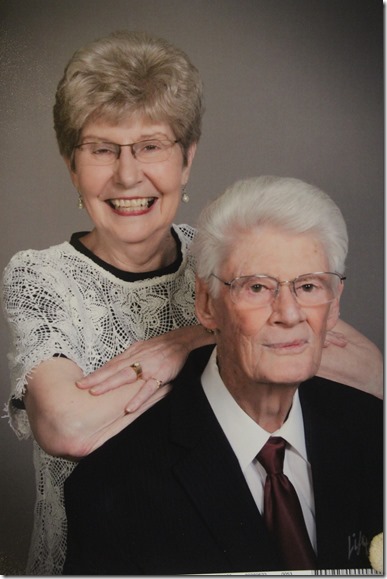 What a blessing you both are to Muleshoe!

Thanks to Marshall and Helen Cook for sharing their lives with me for this story.