A Texas A&M Story with Ties to Muleshoe

I read this article in the current Texas A&M Foundation Spirit Magazine, and when I got near the end, the name Muleshoe jumped out at me! The story of the cannon that is fired after each time the Aggies score was interesting in itself, but when I read that someone from Muleshoe was involved in the history of the cannon, I thought Muleshoe might be interested in hearing the story. So here you go:

For decades, The Spirit of ’02 has fired to celebrate every Aggie score at Kyle Field. 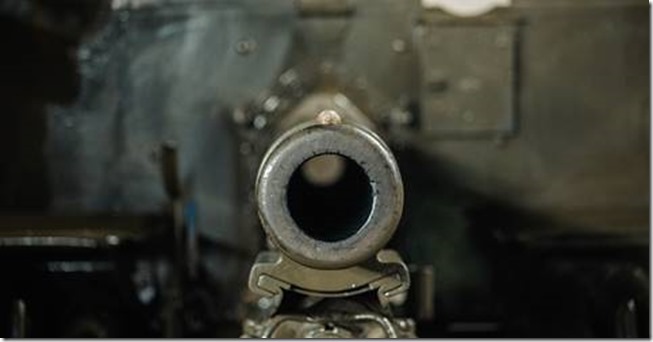 They found the gun in a gully by Easterwood Airport, and it was far from fighting shape. No one could tell when it was abandoned, but by its unearthing in November 1974, time and the elements had taken their toll. Its wood parts were rotting, rust had sealed its breech shut and there was a Dr. Pepper bottle lodged deep in its 7-foot barrel. Still, the Company C-1 cadets who found the gun beamed at it like kids on Christmas morning. After a long day cutting logs for Aggie Bonfire, they had stumbled upon buried treasure.

That night, Dr. Guy Sheppard ’76 received a call from a fellow cadet asking for his help excavating a cannon the company found. “It was just a muzzle sticking out of the ground at that point,” he said. Sheppard and crew spent three hours clearing the dirt encasing the weapon. 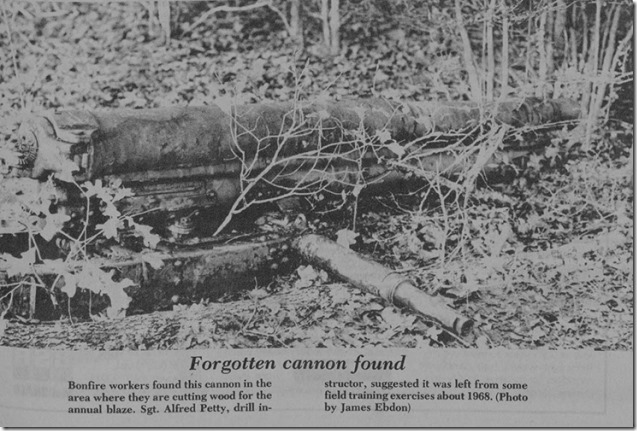 The Spirit of ’02 was found abandoned near Easterwood Airport by members of Company C-1 in November 1974.

Soon after daylight broke, with help from Company B-1, cadets dragged the 2,520-pound weapon with ropes by hand, loading it onto a trailer and proudly parading it around campus before unloading their prize on the Quad. There it would sit, decrepit and undignified on awkward-fitting wagon wheels, until one cadet catalyzed the lowly antique’s transformation into the booming herald of the Aggie football team’s greatest victories: The Spirit of ’02.

Designed in 1902 and manufactured during World War I, the 3-inch M1902 field gun was America’s answer to the famous French 75mm field gun. The model ultimately saw little use during the war, as it proved easier for the U.S. to buy French guns than it was to ship their own across the Atlantic. As for the M1902 that eventually became the ’02, little is known of the gun’s whereabouts before its unearthing, but rumors abound.

Aggie cadets almost certainly used the weapon for artillery training; archival images show cadets manning several guns of the same model during field exercises. After its discovery, many surmised that the gun had been fired on-screen in the 1943 World War II film shot on campus, “We’ve Never Been Licked,” but no evidence verifies this.

In spring 1977, John Gunter III ’79 saw an opportunity to honor his father, John Gunter Jr. ’50, and approached Col. Tom Parsons ’49 and Buck Weirus ’42 with his idea of restoring the gun and standing up a field artillery half section. Weirus, Parsons and Gunter Jr. roundly endorsed the concept, as all had served as field artillery officers. The Association of Former Students provided $3,500 for the effort, and the gun was transported to the Gunter family farm near Muleshoe, Texas. There, Gunter III managed to open the breech and restore the firing mechanism under the oversight of his maternal grandfather and with help from his younger brothers, Gary Gunter ’81 and Brent Gunter ’82. 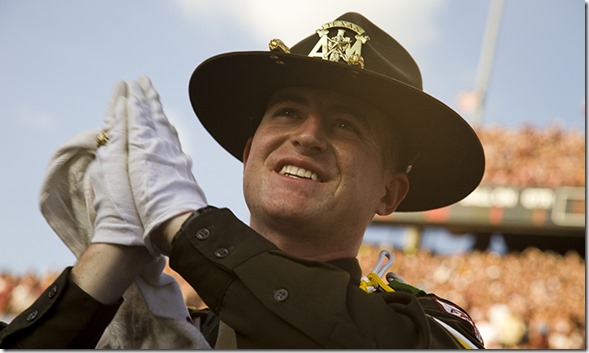 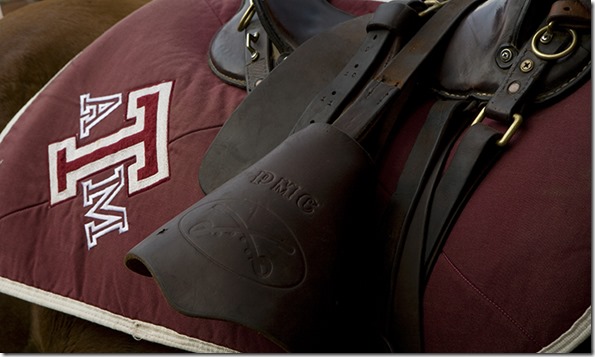 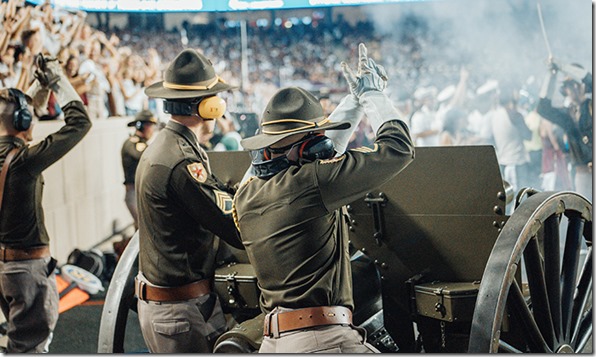 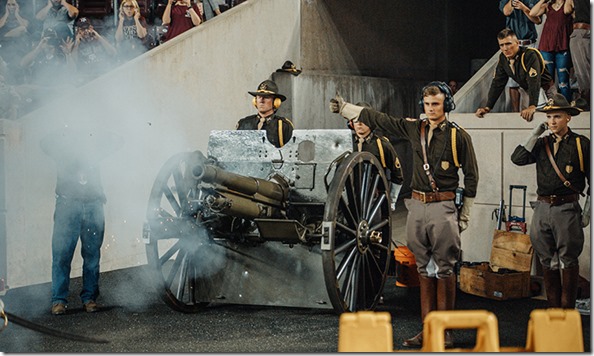 The barrel of the gun was later mounted on the carriage and wheels of another gun and painted; its condition was then fully restored except for necessary wheel repair. In the process, Gunter coined the gun’s name. “‘’02’ points to an era associated with the 3-inch M1902 field gun,” he said, “while I felt the use of ‘Spirit’ was proper given that I was working with the thought, ‘May she speak for those for whom we answer ‘Here.’’”

From there, other Parsons Mounted Cavalry (PMC) members took up the project, driving the gun to a machinist in Oklahoma City, among other restoration efforts, to fully realize its transformation. PMC cadets first fired the ’02 at a 1982 march-in and later at a 1984 football game. However, it would not become a permanent gameday staple until 1988. Since then, the ’02 has reliably fired after every Aggie score and on special occasions, approximately 150 times annually.

By all accounts, firing the gun is as fun as it looks, but with great gunpowder comes great responsibility. The cadets who escort the ’02 to games and other marquee campus events must first prove their horse-riding merit and willingness to put in long hours toward its care. As with a standard rifle, cadets must clean the ’02 after every occasion in which it fires. Unsurprisingly, its caretakers love working late for Midnight Yell but dread 11 a.m. kickoffs afterward. 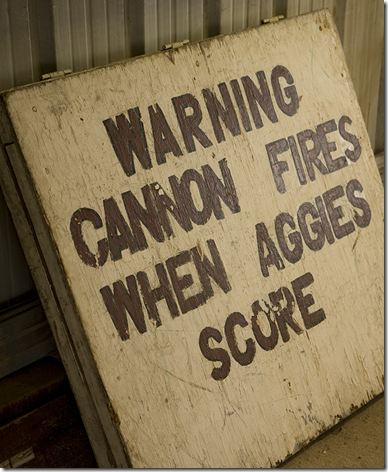 The hard work pays off, of course. Every time the Aggies drive into the end zone and the crowd erupts, a second anticipation falls over the Home of the 12th Man. Within moments, a cadet raises their saber high in the air, dropping it forward to signal, “fire!” Another cadet pulls a lanyard tied around the trigger, blasting smoke from the stadium’s northeast corner and sending shockwaves through the stands. Tens of thousands of Aggies send up a harmonious “Whoop!” and the once-abandoned ’02 breathes new life into Kyle Field again.

They say it’s the little things that matter most. But sometimes, it’s the loud things.

My thanks to Dunae Reader at the Texas  A&M Foundation Spirit Magazine for permission to share this article with you in my blog. And thank you to  Bailey Payne ‘19 for writing the article and Baylee Gruffin and the Corps of Cadets for the photographs used in the article.

And thanks to the Gunter men for  restoring the cannon and making it a part of Aggie history.