I had been watching my Ariocarpus fissurata lloydii since late summer, expecting a flower to pop out of the pretty white wool in the center of the plant. Nothing. I failed to take a picture of all that wool, but eventually one pink flower barely opened in the overcast skies we had for a few days.  I was busy and didn’t managed to get out there for a picture before it closed and would not reopen.

Then, a few days later I was genuinely surprised and pleased to see these two blooms open. What fun! They reopened for two or three more days, which usually doesn’t always happen. 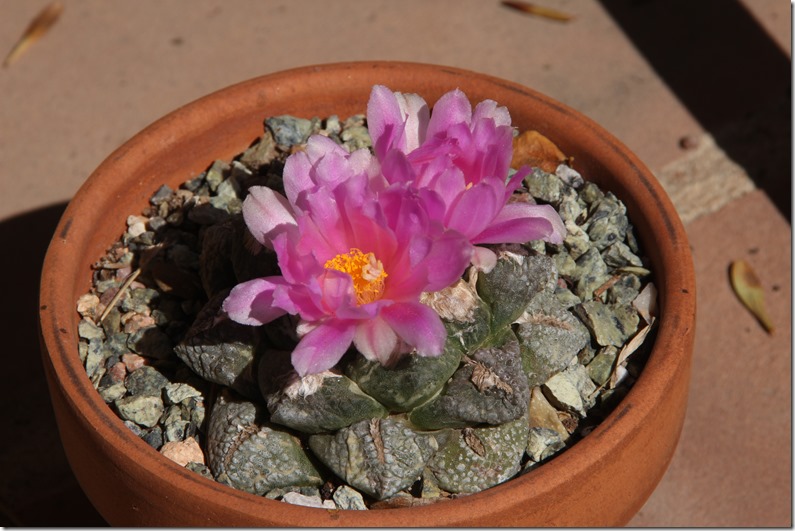 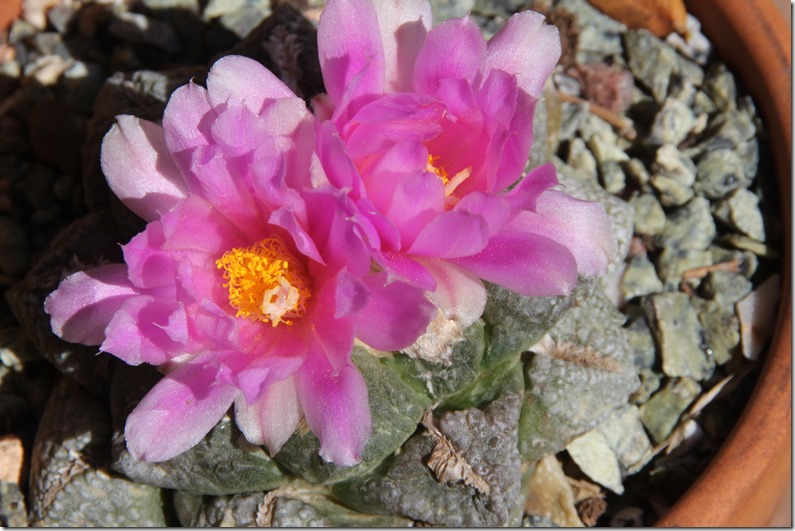 Then a few days later, I was surprised again with this bloom from Ariocarpus retusis v. scapharostroides. Once they do decide to bloom, the process moves rapidly and almost over night go from bud to bloom before you even realize there is a bud forming in the center of the plant. 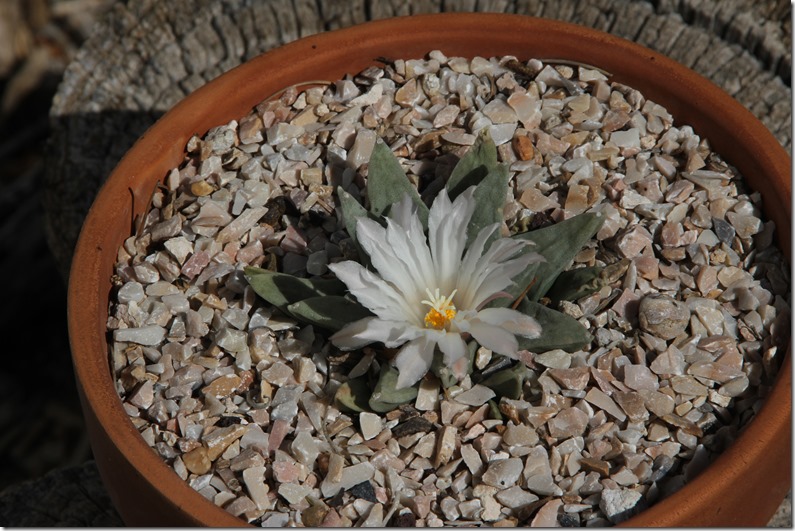 In a previous blog, I mentioned that Ariocarpus retusis is considered to be one of the largest and fastest-growing species of Ariocarpus. But even at that, this plant native to Mexico and also found in South Texas along the Rio Grande, has to be around ten years old  before it will flower. So this particular plant is probably more than ten years old. 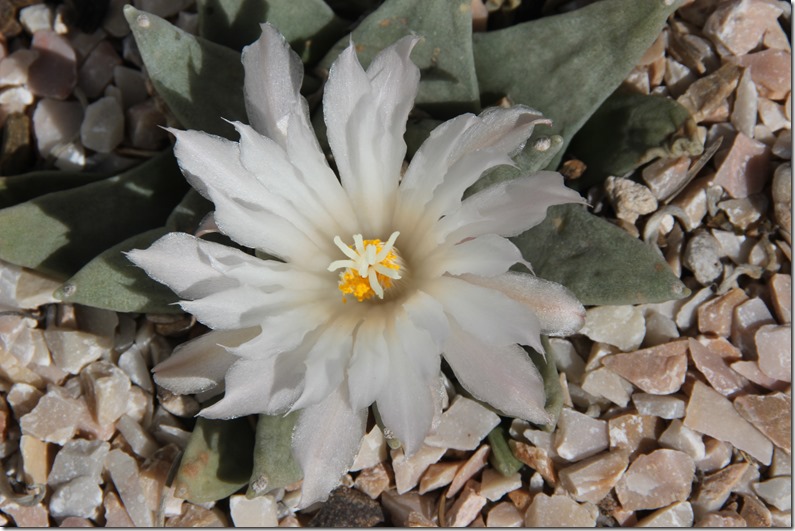 Ariocarpus come in different species, but those of you unfamiliar with the genus might be looking for the spines typical of cactus. Spines on this plant are typically only found on seedlings, and as the plant grows they seem to disappear. I can’t give you the scientific, Cactaceae expert explanation as to how it qualifies to be a cactus, but it is and certainly meets the requirements of a succulent because it stores water in its tuberous taproot and fleshy leaves. And you have heard me say before that all cactus are succulents, but not all succulents are cactus, so there you go!

All Ariocarpus species are wildly popular internationally and have been poached almost to extinction because they can bring ridiculously huge prices over the Internet. If you buy one, please do some research and purchase from a reputable dealer. About the only way to stop the poaching and wiping out of native populations is to not reward the poachers by buying their black market plants. Established cactus and succulent nurseries are the best way to go.

After the two blooms closed, I had another surprise-another pink flower on the same Ariocarpus fissurata lloydii ! I really wasn’t expecting this one and was tickled when I caught it soon enough to get good pictures. I am not sure how old this plant is, but obviously old enough to bloom. And I guess I have managed to do something right taking care of it. This shot also gives you a closer look at the body of the plant. Notice the white wool in the center of the leaf. These leaves are very firm, well, hard, actually. The center of the plant has that clump of pure white wool from which the bud appears. For those of you not seduced by rare cacti yet, you are thinking, what’s the big deal? Once you see them in person and wait for those flowers, you just might get hooked. Or not! But they are one of my favorites. 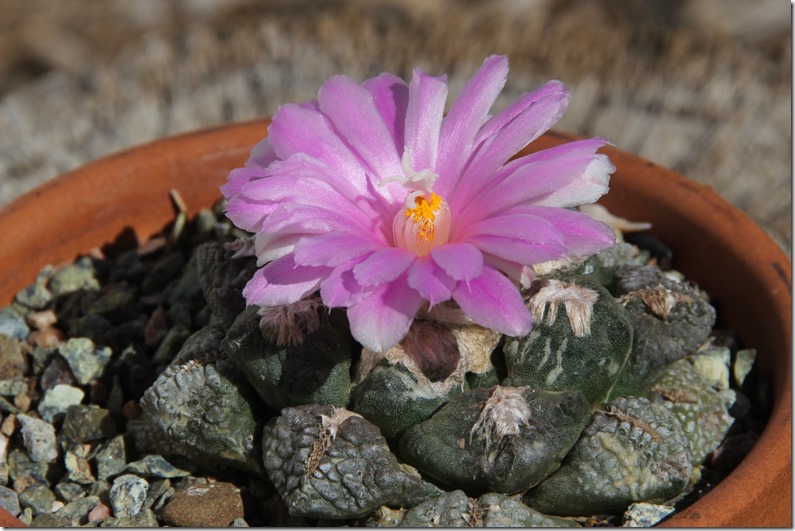 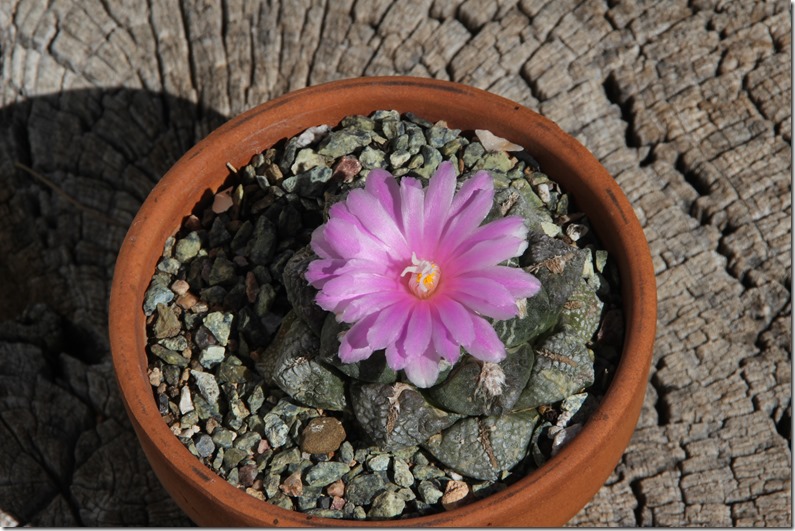 They really are interesting little odd plants. I am waiting patiently for my other varieties to grow up and bloom for me. And when they do, I will share the pictures with you. 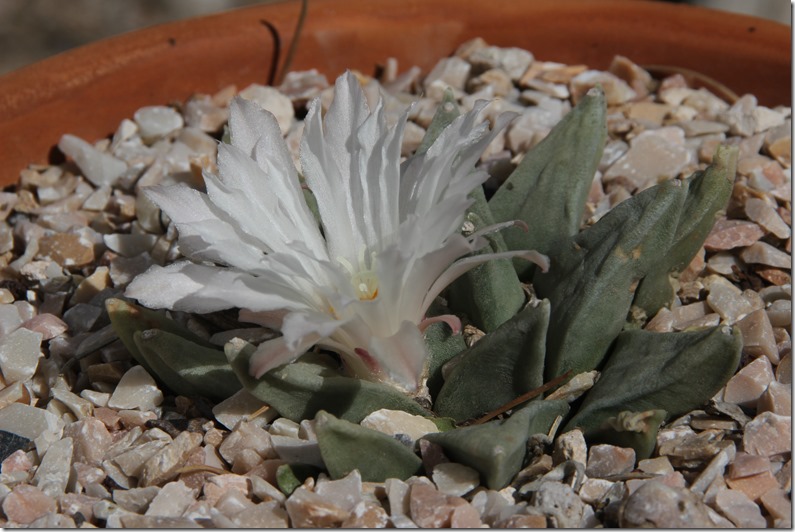