In 2012 and 2015 Muleshoe was graced with being one of the five towns on the KCBD Community Coverage Tour. The pandemic put a temporary stop to the tour, but this year the folks at the television station were at it again, and Muleshoe was one of their stops. We were tickled to be in the line-up along with Post, Sundown, Lamesa, and Wolfforth. 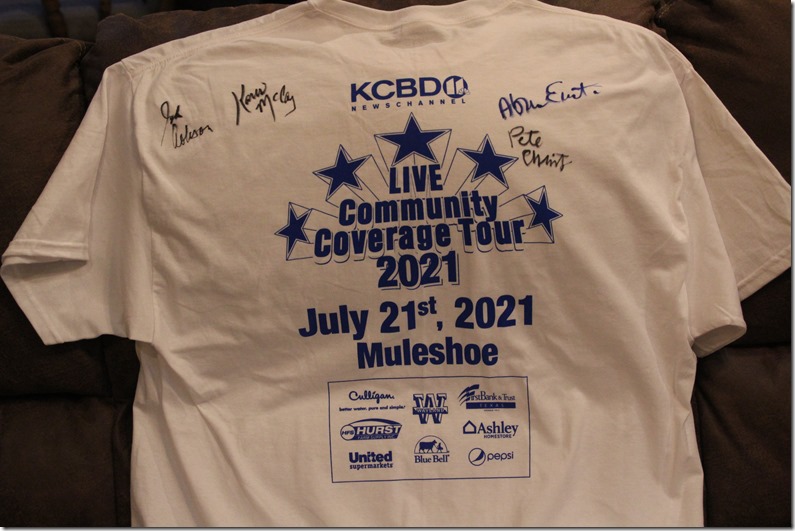 The Community Coverage Tour allows KCBD to recognize small towns in the Channel 11 viewing area and say thank you for watching, but also provides a chance for the small towns to strut their stuff and share good things about their home town. The format was a bit different this year and focused on the morning and the afternoon news programs instead of the 10:00 newscast, which allowed time for many interviews of local citizens, touches of local history, and a look at what each town has to offer.

Our day was Wednesday, July 21st, and started that morning with the Teacher Spotlight on April Smith at Muleshoe High School. I taught with April and was glad she was recognized and had the chance to shine. At noon the Good Neighbor segment focused on Brenda Butler, a sophomore at MHS.

I arrived at the Heritage Center, the site of the festivities, about the time the crew started the 5 o’clock news program. 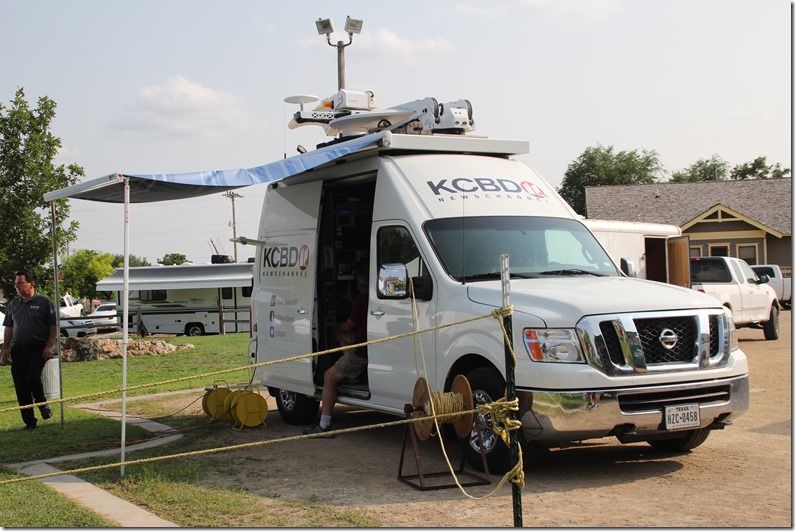 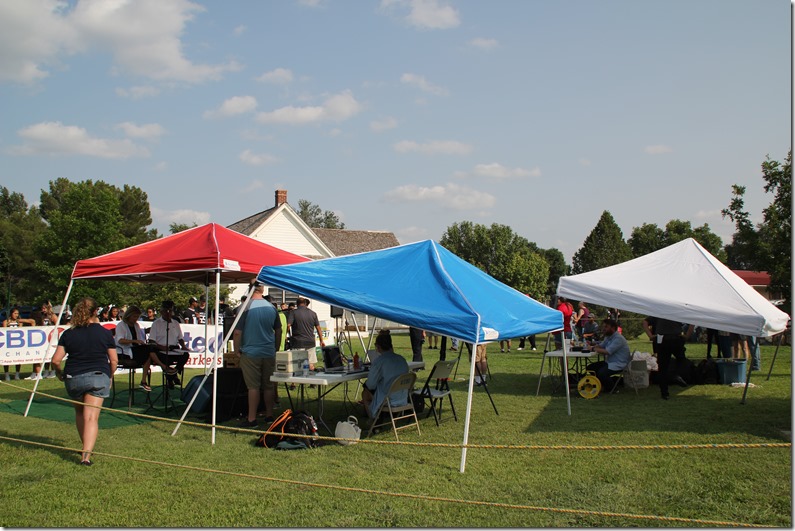 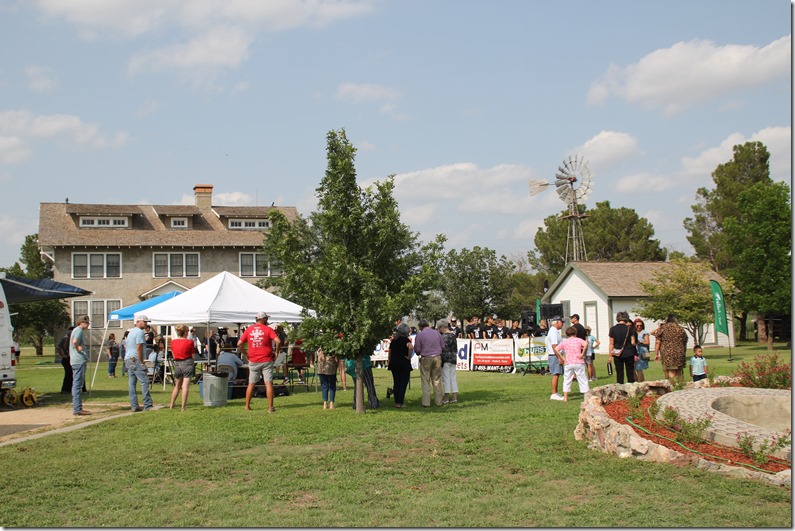 Part of the football team, the cheerleaders, and a crowd had gathered for the evening. 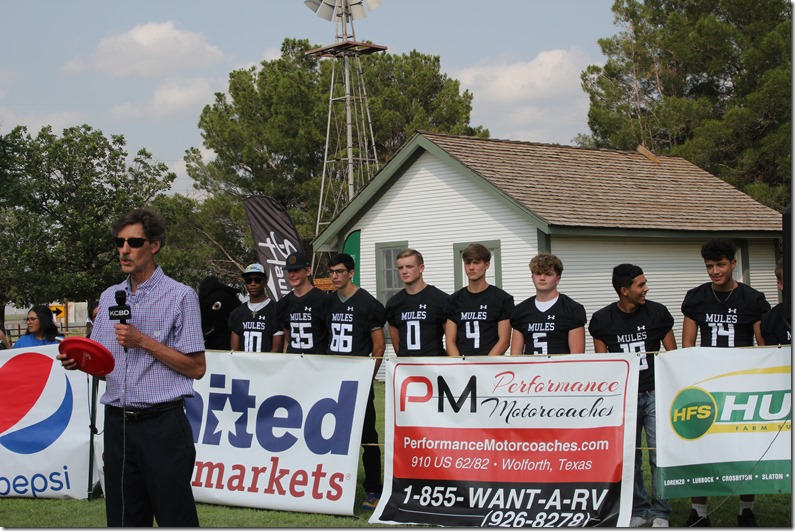 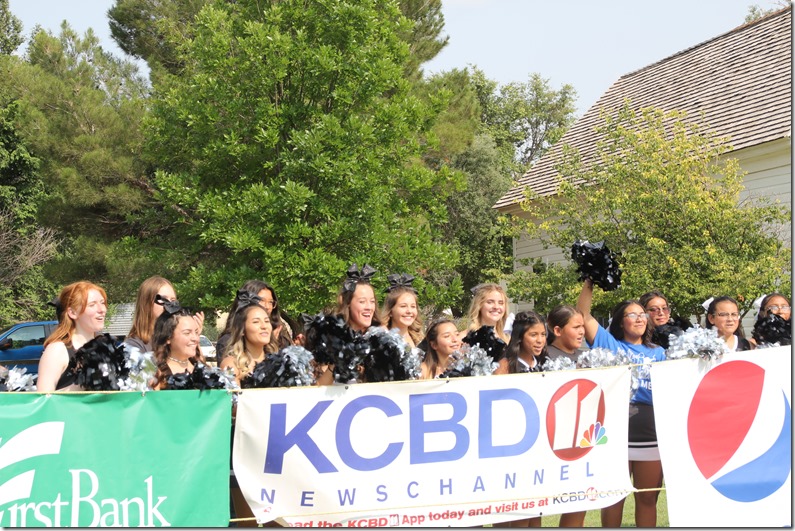 After covering the community tour twice before and making a nuisance of myself taking pictures and talking to Karin, Abner, John, and Pete, they actually remembered me! I visited with them at various times throughout the evening. My fifteen minutes of fame, knowing the celebrities. Well, that and the fact that I had been chosen as the spokesperson to talk about Ol’ Pete in an interview recorded earlier and then run during the 6 o’clock broadcast and later in the 10 o’clock time slot. How cool is that? I had fun. I was probably picked for that segment because I have several stories about Ol’ Pete in my book The Bright Lights of Muleshoe, and they even mentioned the book, which I appreciated. 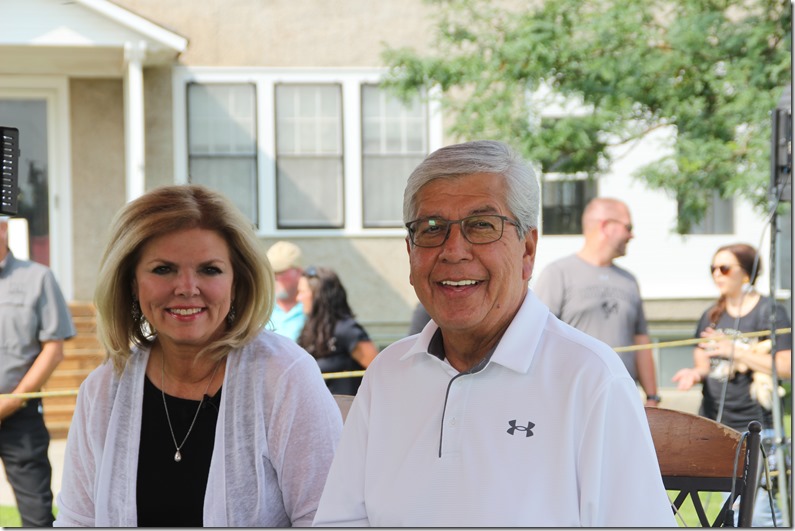 Angela Reyes and her daughter Clara, both teachers for MISD, brought signs for the occasion. 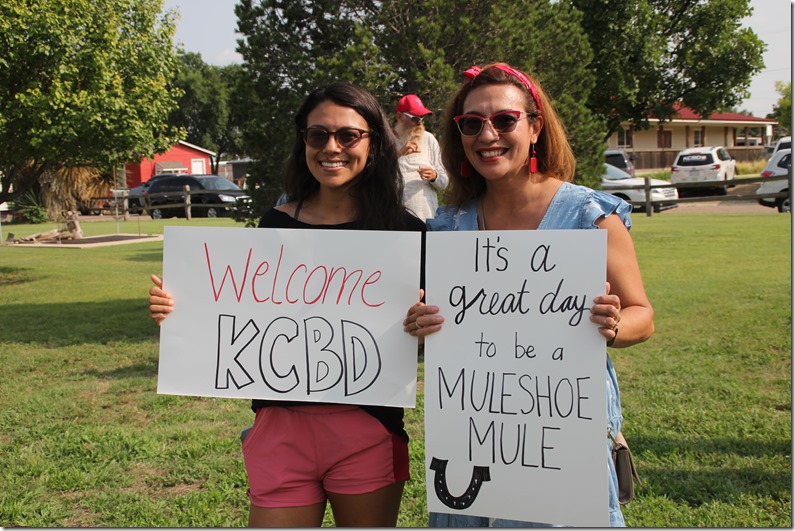 Pete Christy did a sports interview with Kim Chaffin, girls’ basketball coach and then in the 6 o’clock news also talked to head coach Jason Richards about the upcoming football season. Both coaches were pumped about the kids and their commitment to the programs and are looking forward to a good year. 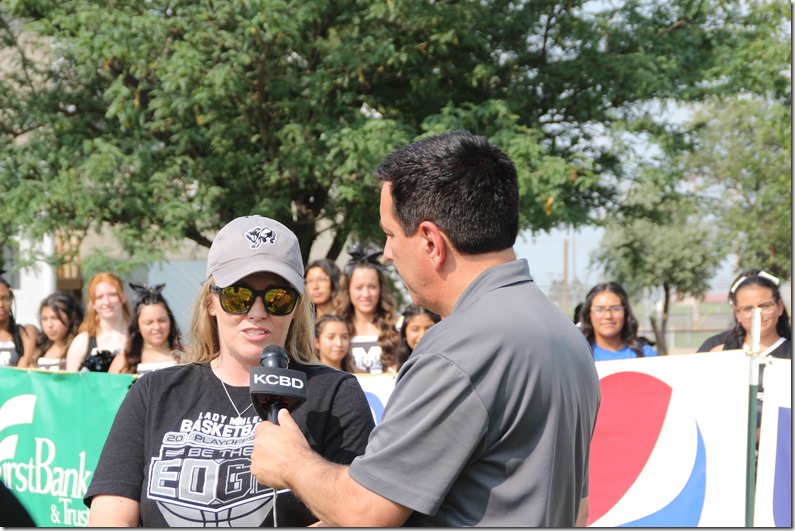 First Bank and Trust brought their cooking wagon and cooked the wieners for the hot dogs, United provided the iced-down drinks and chips, manned by KCBD’s Eleah Lehnen and Charlie Whisner, and Blue Bell brought ice cream for the meal later in the evening. 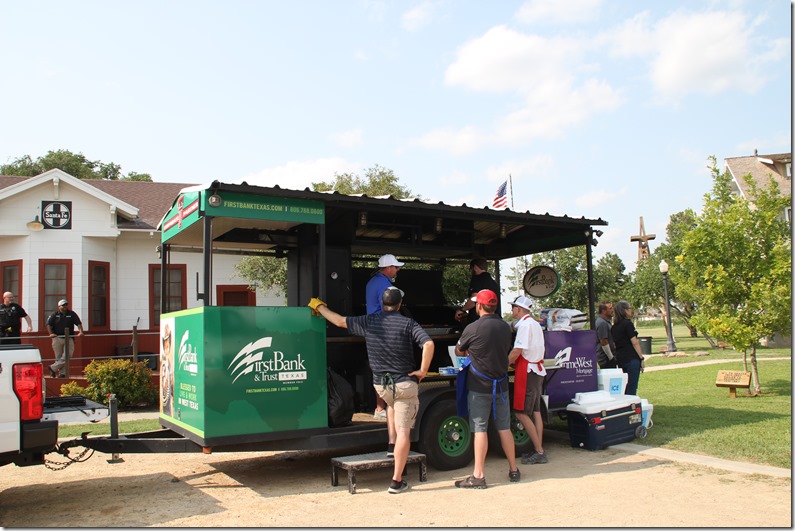 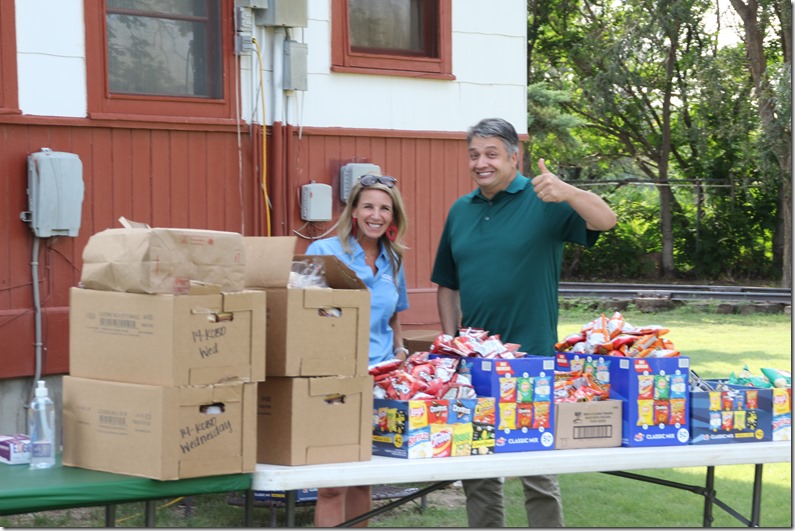 First Bank also had a table with give-away goodies, and Bolton Oil from Lubbock was encouraging people to sign up for their give-away to be drawn at the end of the 6 o’clock segment. 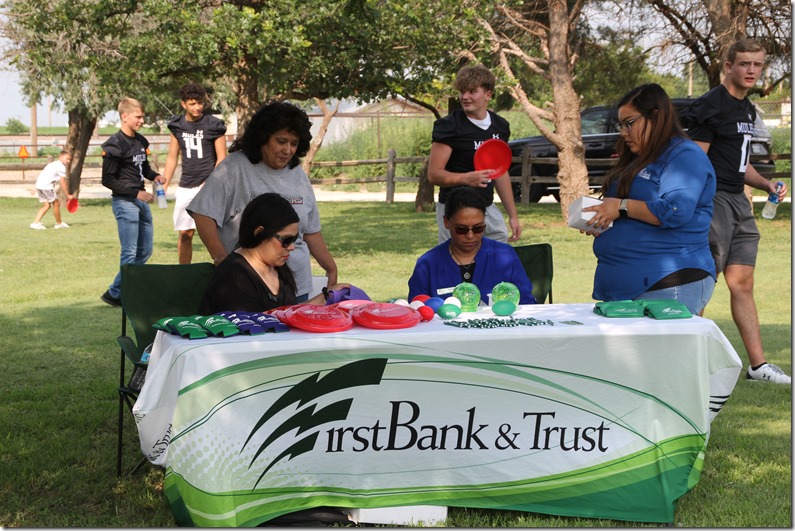 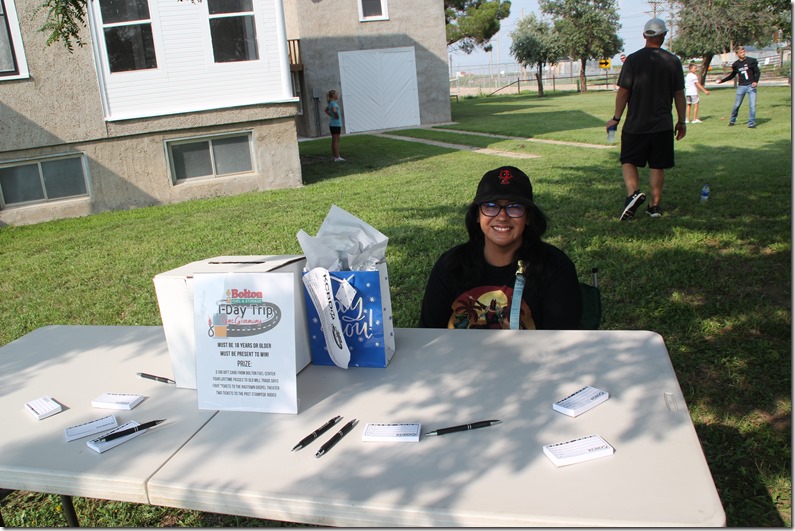 The Janes ranch house, one of the popular structures at the Heritage Center,  was open for tours during the activities. 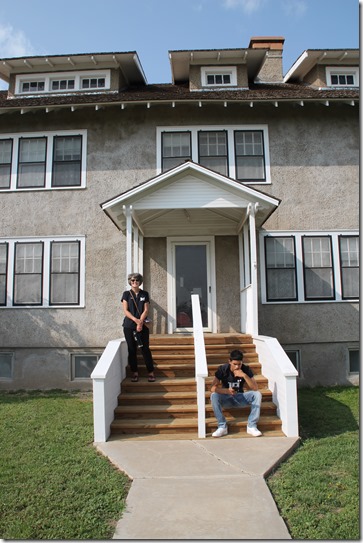 Karin and Abner would introduce stories that had been prerecorded, adding comments and information along the way. It was interesting to see how they were cued by the people in charge of the program as to when they were on camera and when they were waiting as the recoded interviews and ads for Muleshoe businesses were shown at the station in Lubbock. 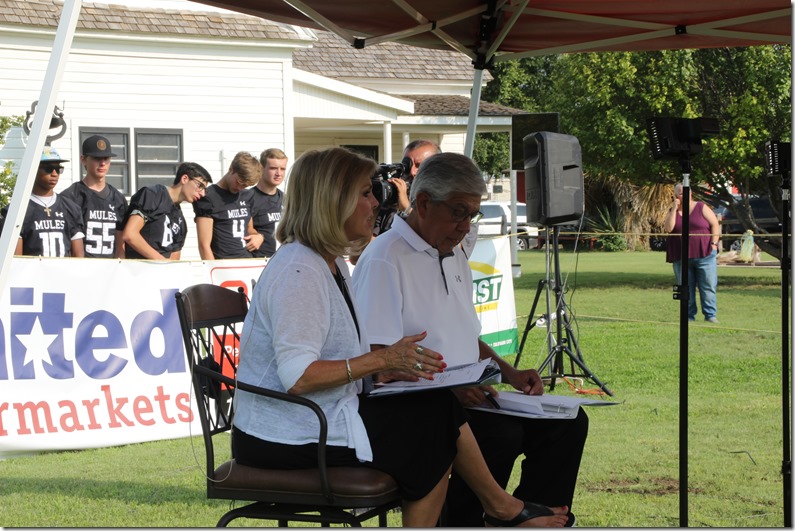 At the end of the broadcast, local kids were invited up close and personal for the sign-off at 6:30. 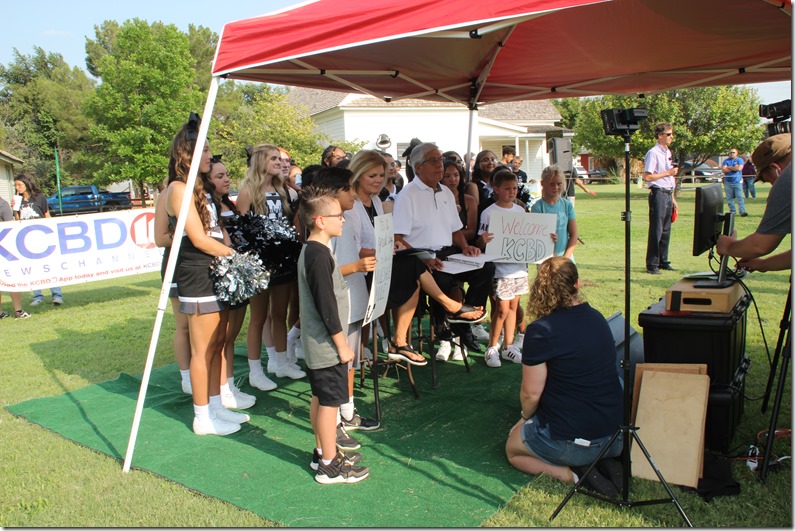 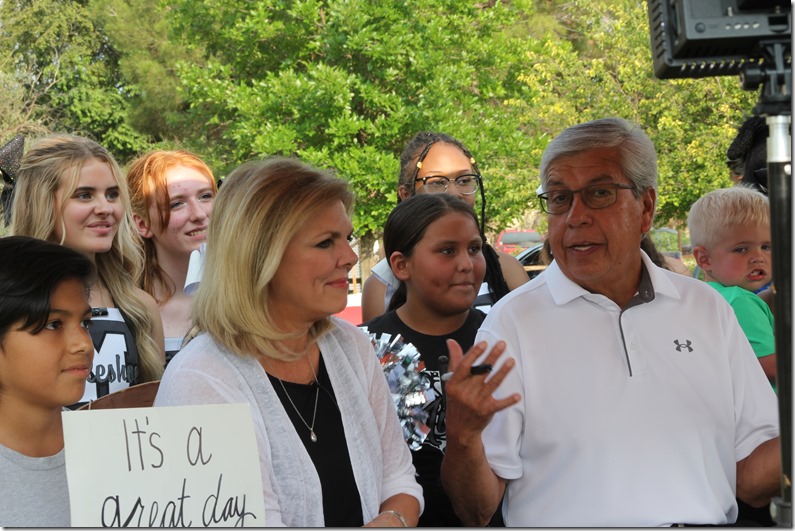 T-shirts were then passed out and many people, including me, had them autographed by the big four. 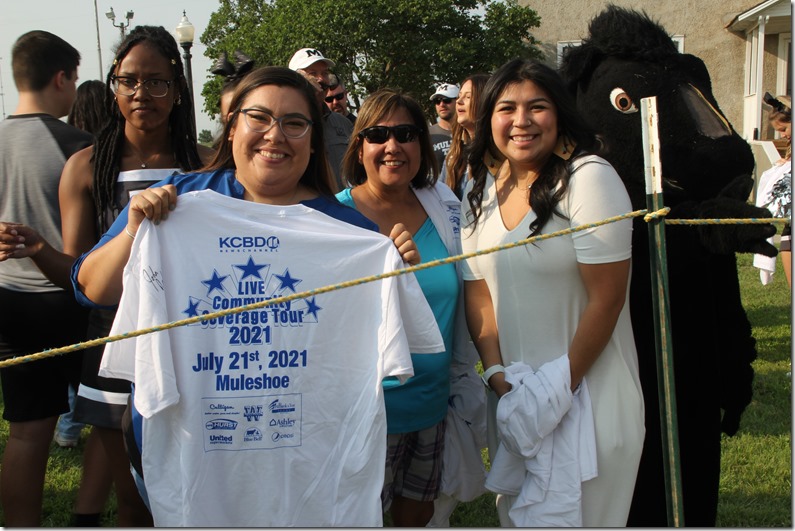 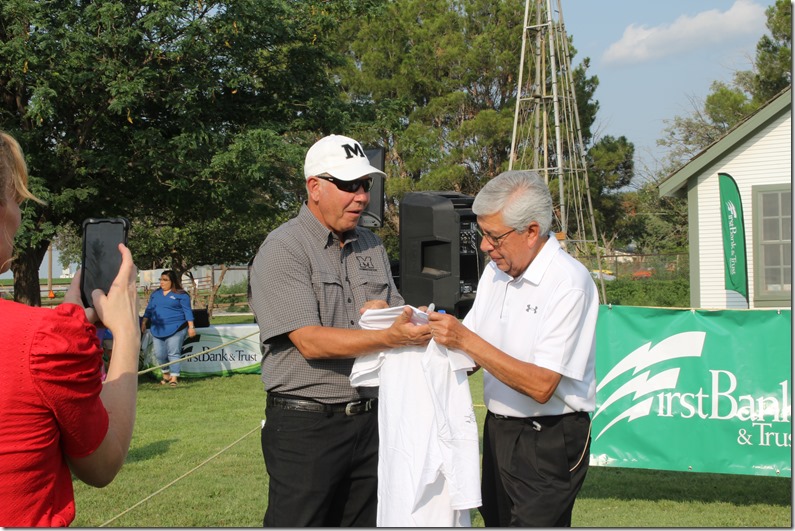 After the cameras were turned off, Abner had fun with Karin by spilling the beans about a comment she had made about Muleshoe being one of her favorite locations on the tour! 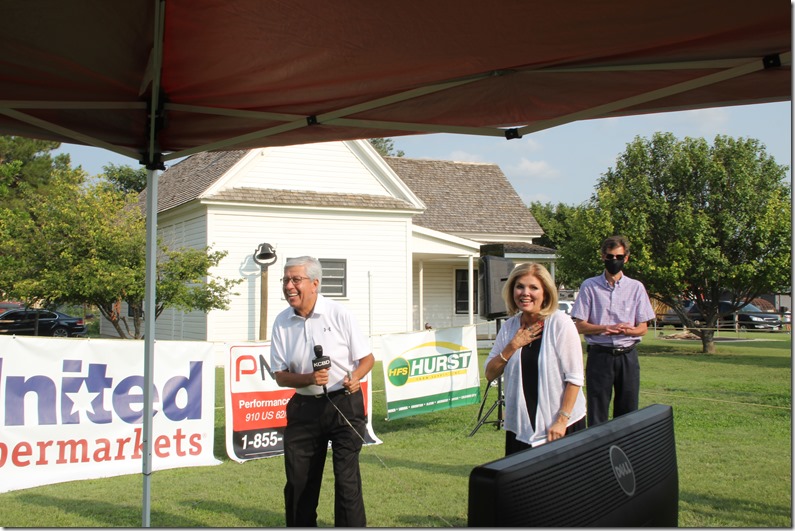 City councilwoman Crystal Alarcon thanked the station for including Muleshoe and thanked the crowd for coming out. 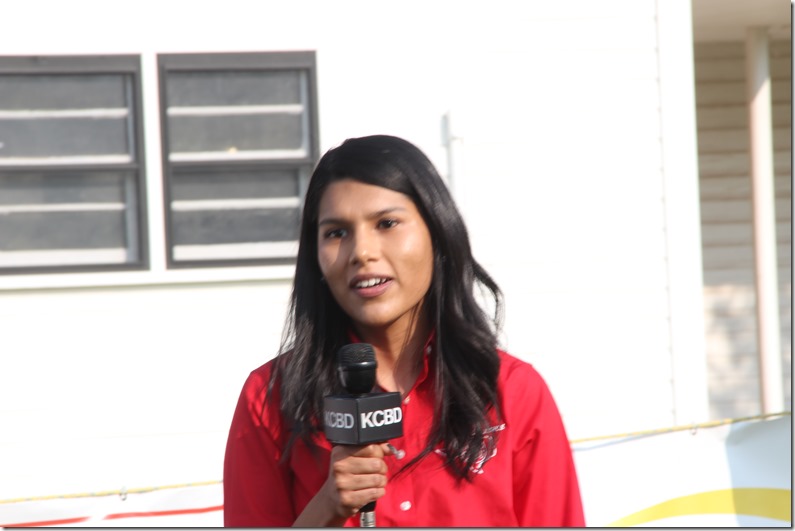 Bryan Morris then blessed the food about to be served, and everyone enjoyed hot dogs and ice cream while the station crew broke camp in systematic and record time, as they had to be back and get ready for the 10 o’clock broadcast in Lubbock. 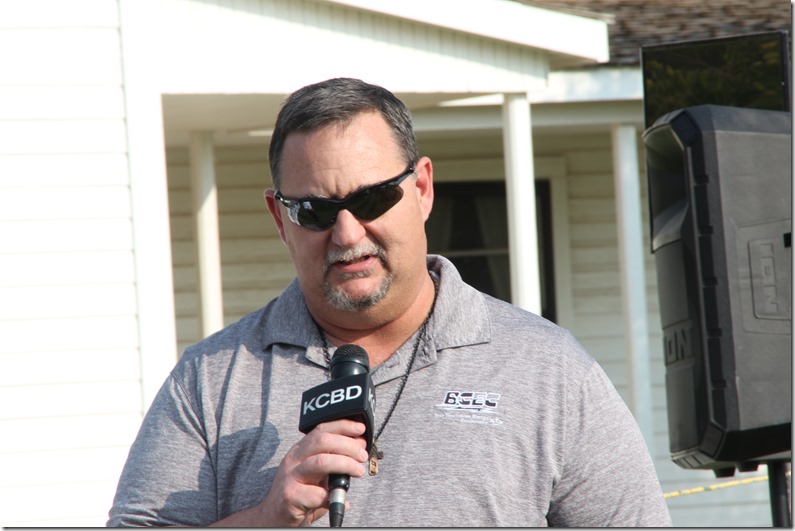 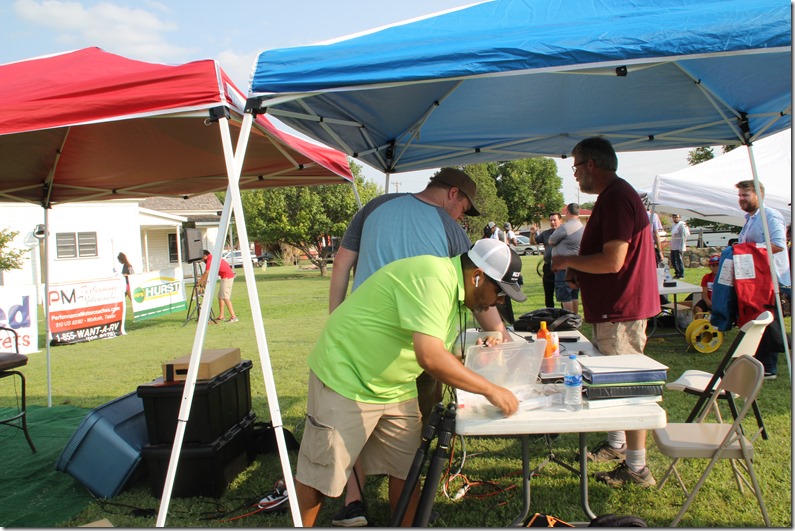 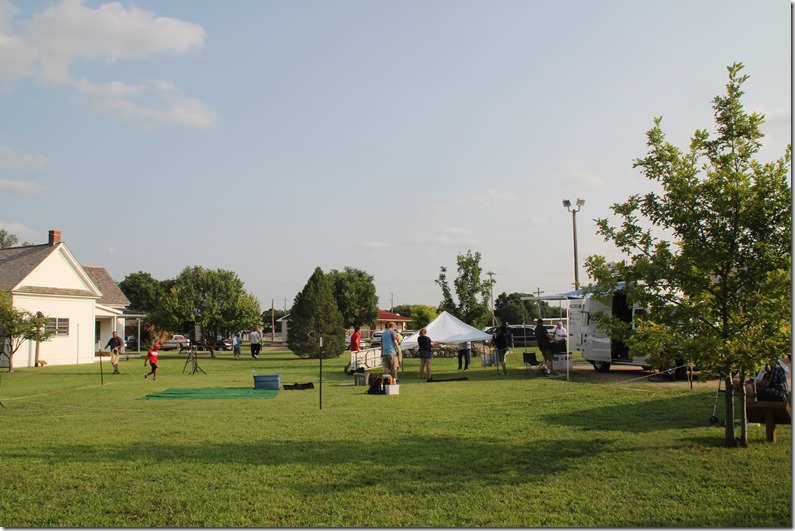 This year I had the presence of mind to set my TV to record the news broadcasts to find out what else was highlighted about Muleshoe for the rest of Channel 11’s viewing area to see; they did a good job spotlighting a variety of people and stories about the town. Some things were repeated in the the broadcasts, and that’s okay since different people watch different time slots of the news. So here’s what made the news on TV while the rest of us were enjoying the get-together on site at the Heritage Center.

Karin and Abner started each broadcast with some information about the Heritage center, inviting viewers to come for a visit and get a look at the historical buildings and followed that with a brief history of the town. An interview with Mayor Colt Ellis and Chamber of Commerce manager Andrea Alfaro followed. The Visitors Center was highlighted, along with the Muleshoe Public Library and Dyan Dunagan. Pictures of and information about the Muleshoe Wildlife Refuge came next. Assistant Superintendent Dani Heathington talked about what MISD has to offer.  K&K Pharmacy and pharmacist Crystal Alarcon talked about their role in the Covid vaccinations, which was repeated at 10.  Oneita Wagnon Senior Center board president Royce Turner also talked about Covid vaccinations at the Senior Center. Karin snuck in a trivia question about local hero Lincoln Riley and his job as OU’s head football coach.

At 6, and again at 10, it was my turn to talk about Ol’ Pete. Karin and business manager Myles James talked about courses offered at Muleshoe High School, like the Muleshoe Academy, dual credit classes, and CTE, programs not always available at rural schools. Also repeated at 6 and 10 was an interview with 102 year-old Muleshoe citizen Ruby Green. The Hurst Agriculture spotlight was on Coby Branscum and his family’s farming/ranching operation. Pete Christy’s interview with football head coach Jason Richards and the upcoming season ended the 6 o’clock broadcast. MHS Valedictorian and Salutatorian Danielle Moran and Grace Leal were congratulated more than once during ad breaks.

Back at the station for the 10 o’clock news, Karin and Abner talked about the great weather they enjoyed for the visit, repeated the aforementioned segments, and announced the Bolton drawing winner was Linda Tosh. Her prize was a hundred dollar gift card from Bolton’s, four lifetime passes to Post Old Mill Trade Days, four Ragtime theatre tickets, and two Stampede Rodeo tickets.

Wow! That’s lots of information about Muleshoe. Thanks, KCBD, for including us in this year’s tour. Hope to see you again in the future. 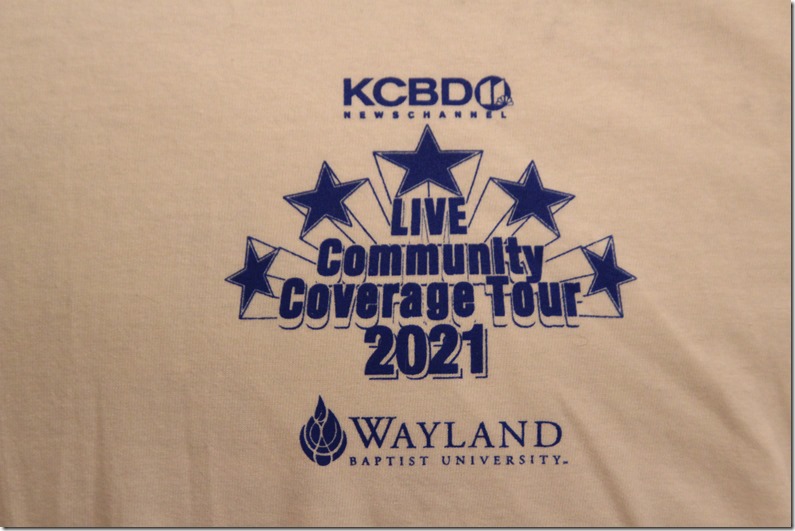