My Cage Ranch Cacti are Blooming

A few years ago, J.D. Cage, or was it his son Jay?-I forget after all this time-called to ask if I would be interested in some cactus they had found on their Earth, Texas,  ranch (18 miles from Muleshoe, for those of you not familiar with this part of the world). Would I like to dig them up to plant in my garden? Well, of course I was interested!

So off the three of us went one day, shovels in hand, to find these cactus. This was before the days  when I thought about taking pictures of my cactus treasures in habitat before escorting them home with me, so I have nothing to show of cactus on the ranch. But I do have scores of pictures of them in the garden, and those are what I will share with you, like this one, the smaller of the two I brought home, and it’s not a small cactus! This one is eight and a half inches in diameter, which is a good-sized Echinocactus texensis, commonly called a horse crippler cactus. 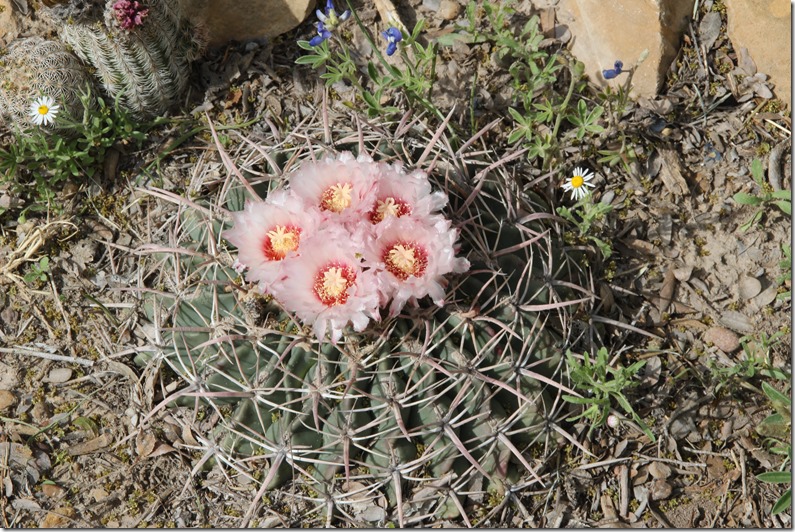 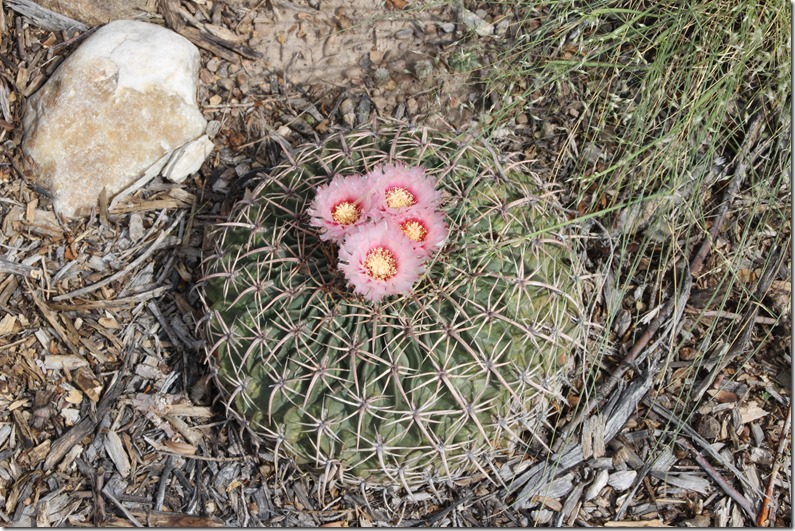 Both have grown since coming to live with me, but they were big cactus to begin with, and that is why they showed up and were so noticeable to J.D. and Jay when they found them. There was a third one close to these, and no doubt smaller ones we didn’t see,  but I chose to leave the others so there would be more cactus produced in the future. Digging up whole colonies of cactus is one of the problems with people going out and digging in the wild. The temptation is to take them all-it’s like a treasure hunt and hard to resist. But if you do that, you are endangering the livelihood of the species. Some have to be left to produce seeds for future babies, like this one next to its parent plant in the picture below. The two babies covered with white spines are seedlings from a nearby Echinocereus reichenbachii. 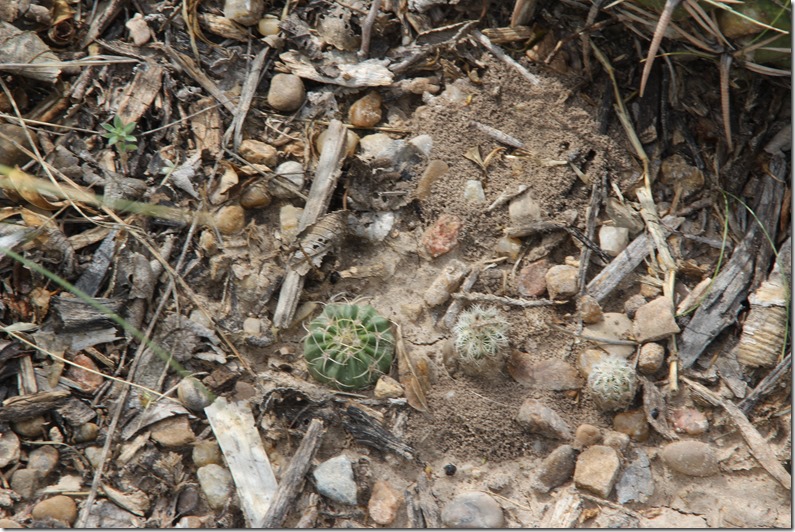 After the flowers fade, they make these pretty red fruits. Eventually the fruits dry to brown and are chock-full of black seeds that look like poppy seeds. As the dried fruit cracks open, with the help of wind and water the seeds roll down the rivulets made by the ribs of the cactus, drop to the ground, and germinate the next spring with no help from me, providing unlimited numbers of little babies to plant elsewhere in the garden. What fun! 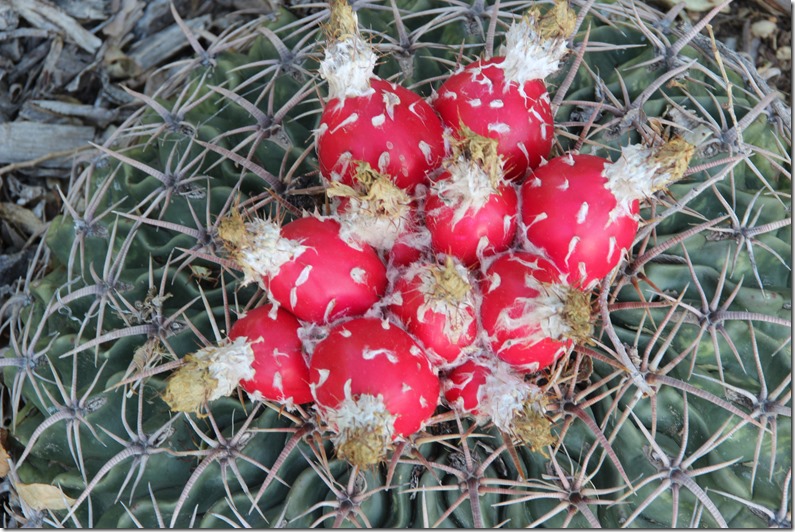 This cactus is indigenous to Texas, hence the name E. texensis. It can be found pretty much throughout Texas, but primarily through the middle of the state, skipping far West Texas, the Panhandle, East Texas and part of the upper Gulf Coast. I suspect, however, thanks to cactus lovers planting them elsewhere, they can be found anywhere in the state. They are very cold hardy and easy to grow, provided they don’t have to stand in water.

Every year during the winter, since these two are native to this area, they shrivel down for protection from the cold, turn sort of brown, and I’m just sure I have lost them. Then, as it starts warming up, they magically puff up, turn green, and bloom! My other E. texensis specimens never change quite like these two do, so it’s always nice to see that I have not lost them. 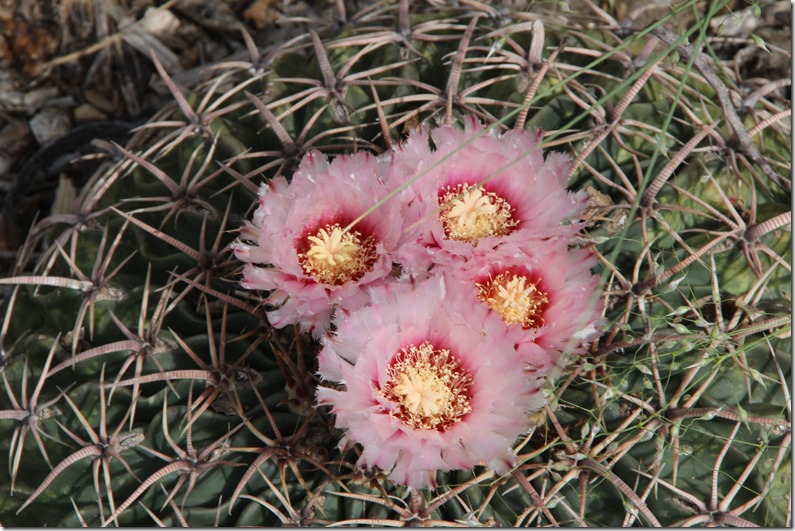 They are one of the first cactus to bloom, usually for me during the first week of May. The blooms last a day, maybe two, and have these lovely, feathery petals. I will point out that this particular plant in the picture below is not one of the Cage plants, but one from the Hill Country. I shared it because it clearly shows the feathery petals all horse cripplers’ flowers have, but also to show you the difference in the body and spines of the plant. The Hill Country is wetter than our area and at lower elevation, so those texensis specimens have fleshier bodies and fewer spines to protect the body from the sun, which is not quite as strong in the Hill Country. That’s known as variation of the species. Same plant, individual differences. 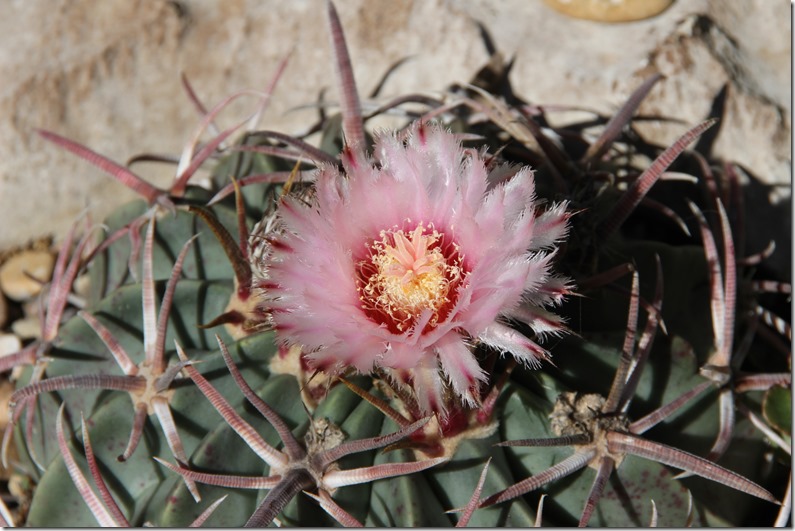 So every year I wait in anticipation for these two plants to bloom, and the others I have follow suit. The two Cage cactus- this is the bigger one- have already bloomed, but others will follow. 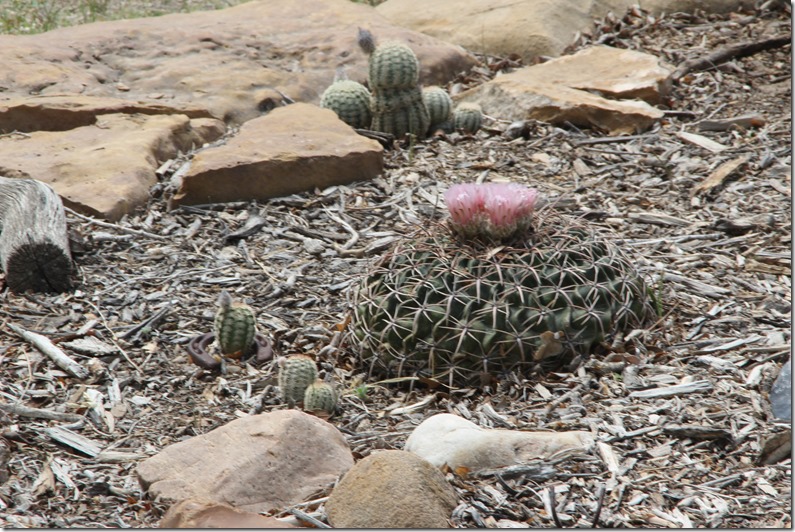 You are welcome to come enjoy the blooms in person!

Thanks to J.D. Cage and Jay Cage for sharing their cactus with me.