The Houston Texans professional football team and Apache Oil in Houston wanted to do something to recognize the dedication and hard work of first responders, so they created the Star of Courage award in 2013. A first responder who has been nominated for his/her excellence in leadership, bravery, and commitment to Houston is awarded the Star of Courage for that month and receives recognition and awards along with a tree being planted in their honor. Then every year one of those monthly stand-outs is chosen at a Texans football game and a $10,000 donation is given in their name to the 100 Club of Houston, an organization that supports the dependents of first responder heroes lost in the line of duty.

Raul Mata is a Texans fan as well as the brother-in-law of a first responder, Raven Hernandez, who is an AMET with the Bailey County EMS. He saw that Star of Courage nominations were open on the Texans website, chose to overlook the commitment to Houston clause, and nominated Raven for her hard work and commitment to Bailey County. And apparently the people in charge of naming a winner chose to overlook that little detail, too, and felt like Raven’s dedication to become certified and serve the community was worthy of being named the Star of Courage recipient for the month of August. What a deal! 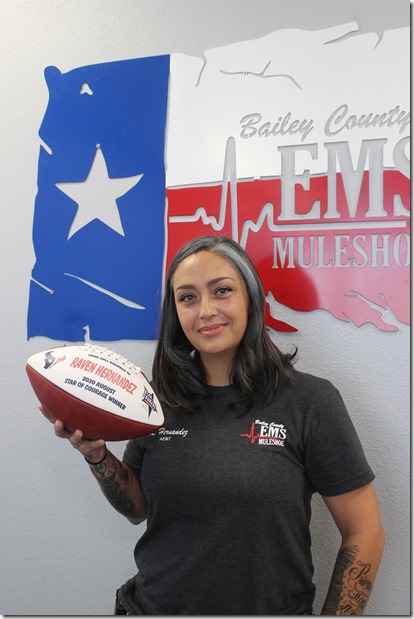 August’s Houston Texans Star of Courage Award presented by Apache will be presented to AEMT Raven Hernandez. Hernandez is a single mother who decided to return to school to become a first responder. She works in a small town, and is setting a great example that hard work and determination can get the job done. Currently she is serving in her community as a COVID-19 tracer, helping manage all the current cases in her county and is doing an amazing job.

Raven started school in Muleshoe when she was in the sixth grade and graduated in 2002. Raven kind of chuckled that  she was not always a willing student, but when she came to terms with wanting to make something of her life, she attended nursing school at Clovis Community College. Health issues developed that shortened her window of opportunity to become a mother, so she took that step, had her daughter, Gia Bree, and chose to be a single mom holding down two jobs, no mean feat, while putting her education on hold.

But when Gia Bree turned nine  in 2018, it was time to complete that unfinished education. Becoming an emergency medical technician was still in the field of medicine, which interested Raven, and classes were at night, which allowed her to still be a mom and hold a job, well, two. So back to Clovis Community College she went, and she fell in love with the field of emergency medicine.

By May of 2019 Raven had earned enough credits for two associate degrees, one in liberal arts and one in emergency medicine, and was certified as an Advanced Emergency Medical Technician. In August of 2021 she will begin work on her paramedic certification which will also include a bachelor’s degree when classes are completed. When that is all done, her goal is to take the next step and obtain her master’s degree in emergency medicine.

The football with her name on it is on display at the EMS office, and she is quite proud of that. The football signed by Texans’ outside linebacker Whitney Mercilus is also special to her, and it stays with her at home. She enjoys watching him play ball and appreciates the work he does to use his resources to “pay it forward” with youth in Houston. 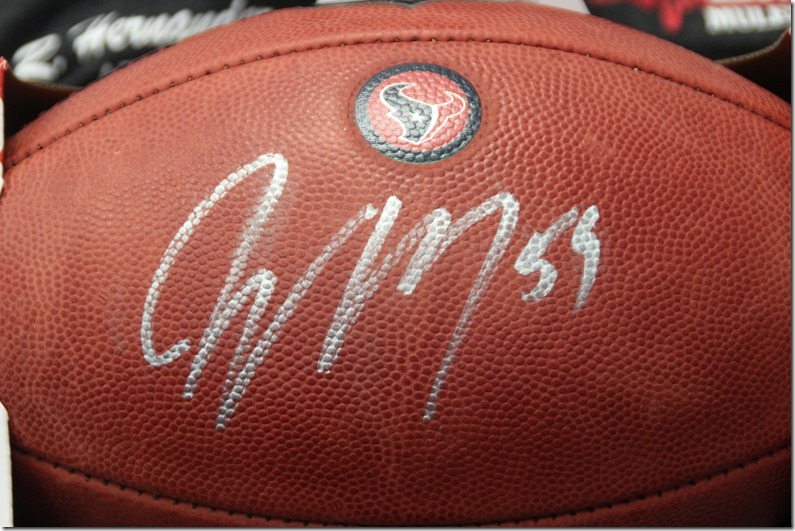 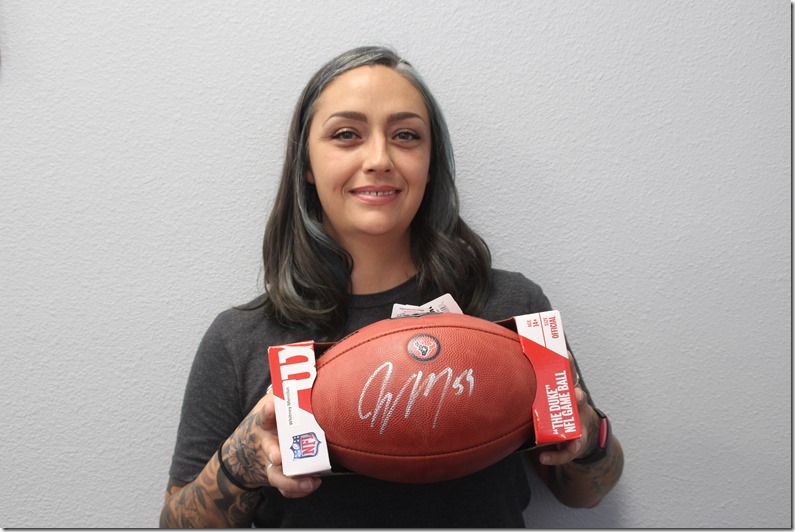 Raven is quick to give brother-in-law Raul lots of credit for helping her get where she is today-in her words, helping her become an adult! She also appreciates the help and support of her co-workers and the rest of the family who help with schedules and such so she can continue to be available for things like Gia’s pep rallies (Gia is a seventh grade cheerleader) and other activities moms are responsible for. 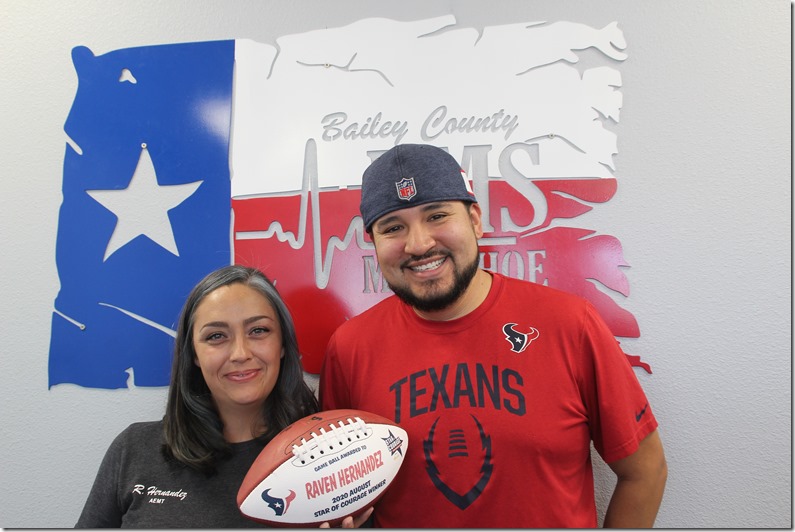 I asked Raven what it is about emergency medicine that appeals to her, and she was quick to answer that she wants to help people and make sure they are okay. I also asked her what kind of emergencies and calls were the most challenging and interesting. If you read last week’s story about the Bailey County EMS, you learned about the two categories of calls they answer: medical and trauma. She said with trauma calls, you can see the problem and fix it. With medical calls, you have to think about it because you can’t see what is going on inside the body.

I think that is why she has continued to be drawn to medicine-the mental challenge and the satisfaction of figuring things out so that her emergency care helps patients leave the hospital healthy.

For someone who once wasn’t real motivated to exercise her brain, that’s quite a turn-around, I must say.

Good for you, Raven. And congratulations on your recognition.