The Fourth of July That Almost Wasn’t

Saturday, July 4th, was a busy day, but the coronavirus almost shut things down. The parade was cancelled, which was a real shame, but other events gave the people of Muleshoe ways to celebrate and enjoy Independence Day. 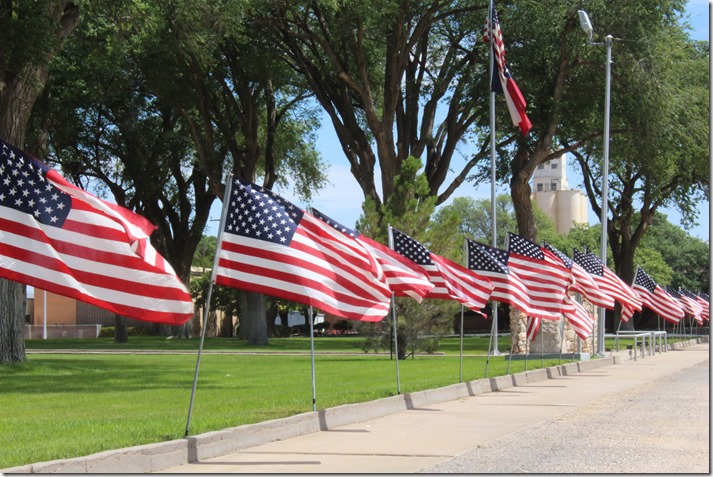 Vendors were allowed to set up along American Boulevard this year in hopes of generating social distancing. It was mostly food trucks, and then me, selling succulents. 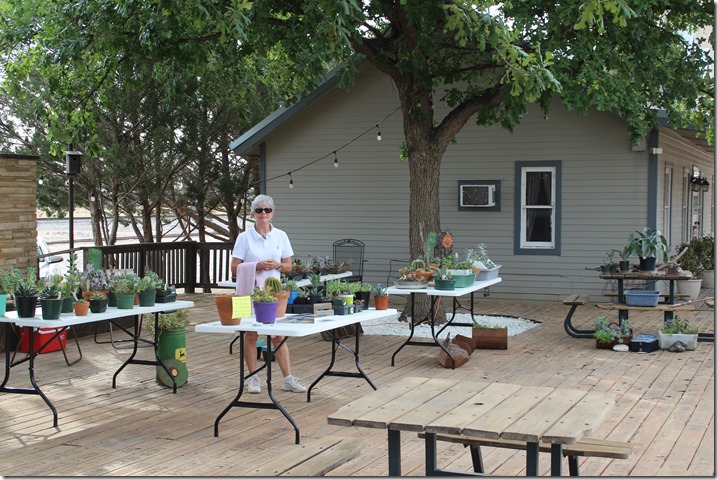 And because I was busy, Gabby checked out some of the other activities around town and shared pictures with me. Her first stop was the Oneita Wagnon Senior Center where the Wall of Honor was prominently displayed, an appropriate recognition for the Fourth of July. 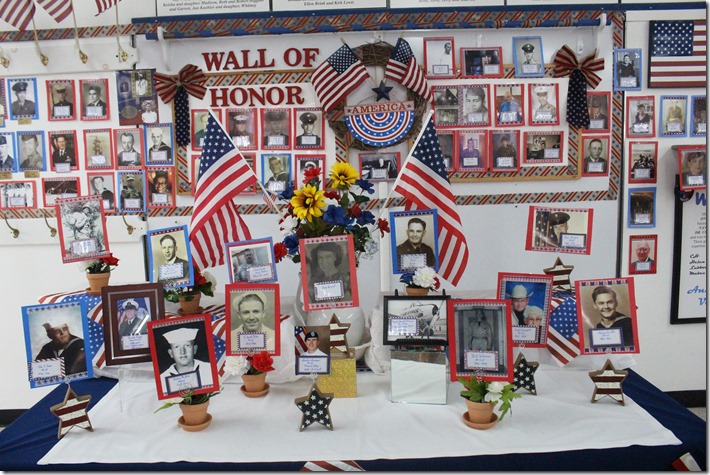 The center was hosting a barbecue meal and a crowd lined up early to enjoy the food. 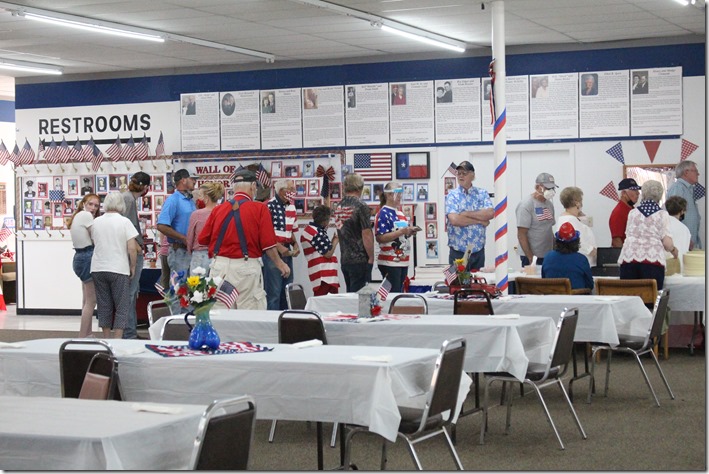 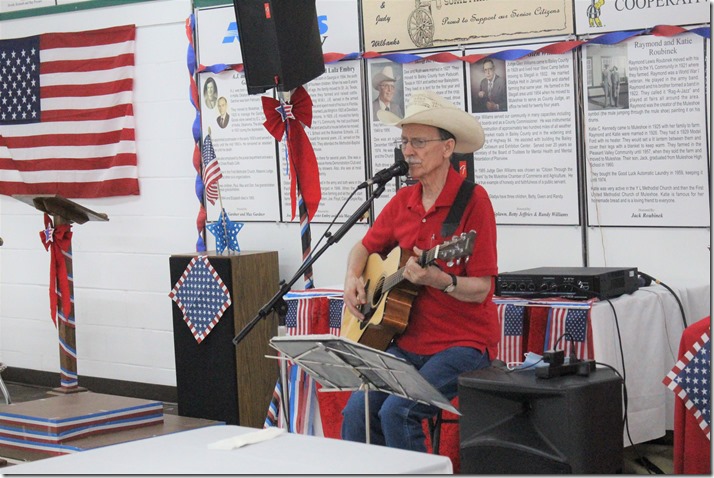 The center started an auction on their Facebook page and then completed it at the center with Kem Bales handling the auctioneering. Lots of people donated many items for the auction, including these cakes that caught my eye earlier, the first three baked by Diana Gandara and the doll cake by Fern Treadway from Texico. I was told they all brought a nice price, too. 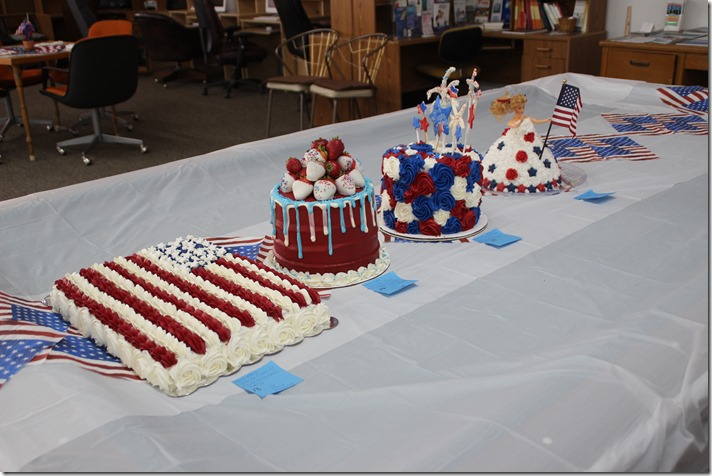 Food trucks were lined up all down American Boulevard. I watched the line form in front of Alonzo Cruz’s Pop’s Country Smoke, which I could see from the chamber office where I was set up. 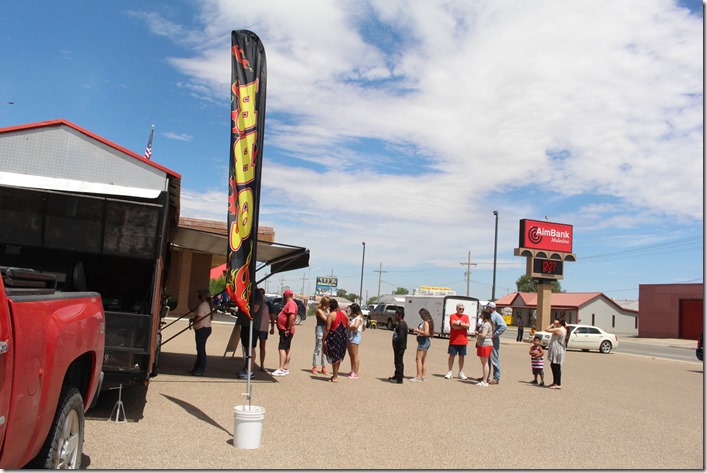 A little farther down the road the Cisneros family, Gerardo, Jr., Sarah, and Gerardo Sr., were serving Mexican food at La Carreta. 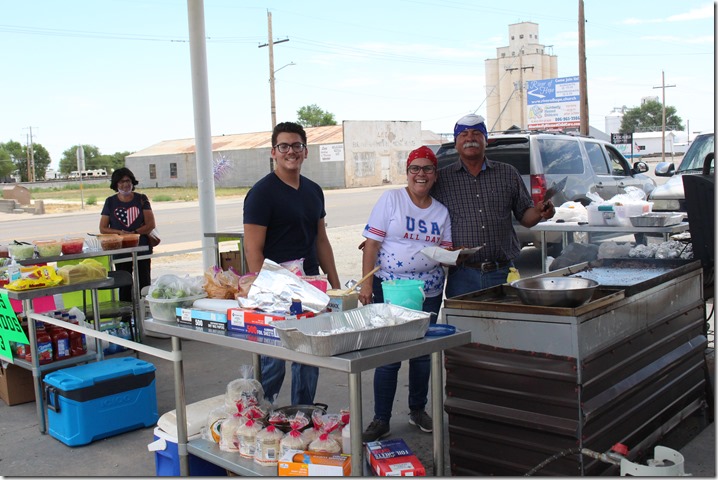 Mario Zaragoza and his ice cream cart also made the rounds, but he also partook of good things at the food trucks. 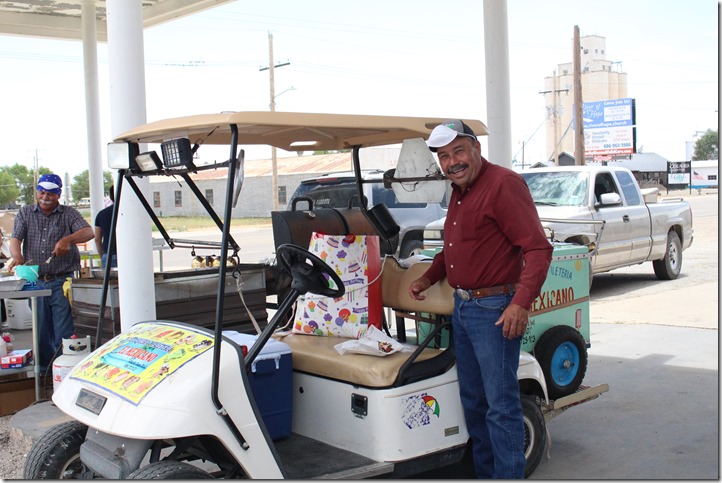 Shipman’s Body Shop was celebrating their 50th anniversary and held open house with refreshments and showcased area custom cars which would have been in the parade, had we had one. 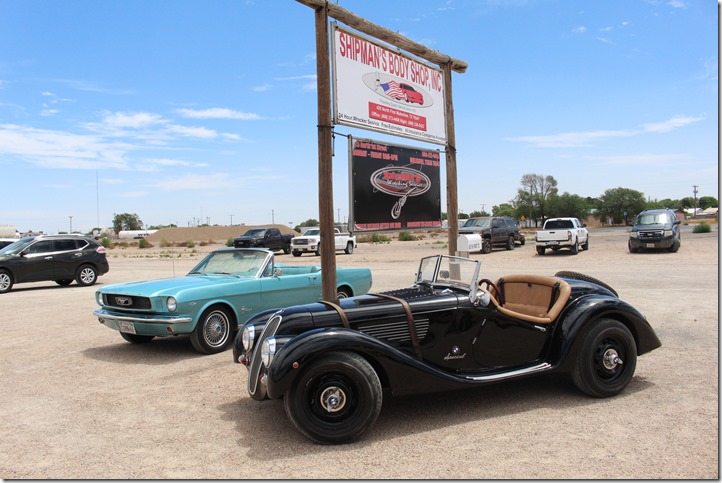 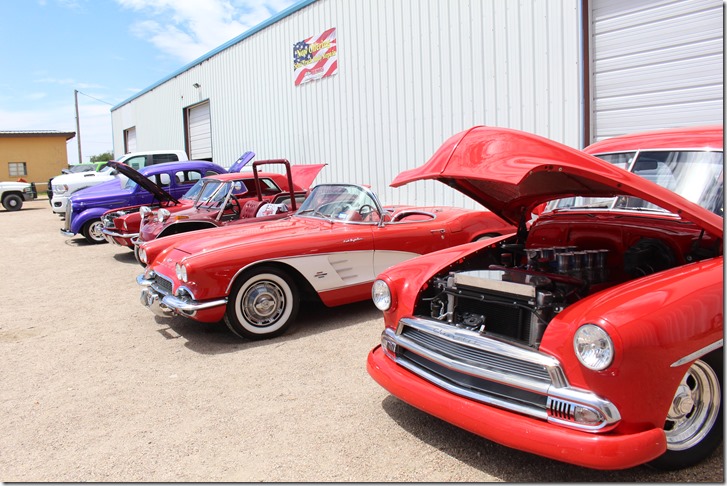 I had a nice flow of traffic, made good sales, and visited with former students and new friends. One of my younger customers, Max Tovar, won the plant give-away. 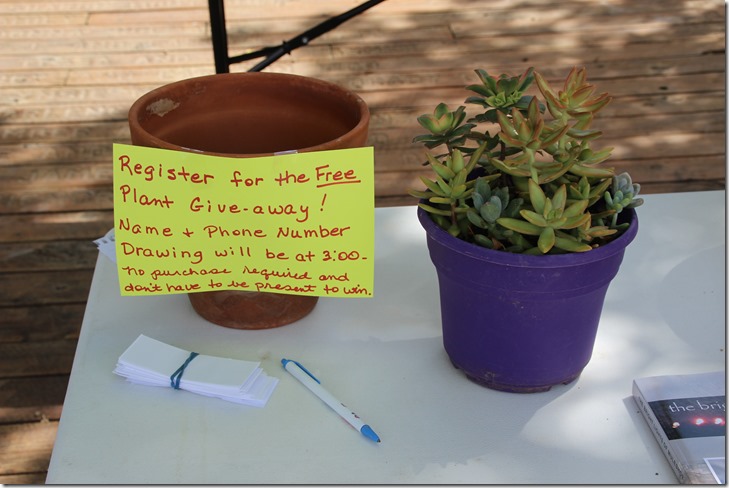 As the traffic began to slow down, it was time to pack up, go home, and get ready for the wedding of Chris Cage to fellow Angelo State University classmate Cheyenne Maples from Lampasas, Texas. The wedding was held at the Desert Rose with decorations by Rhonda Myers and Keely Dunham and the meal of smoked brisket and sausage, baked beans, and pasta salad catered by Michael and Denise Dunham. 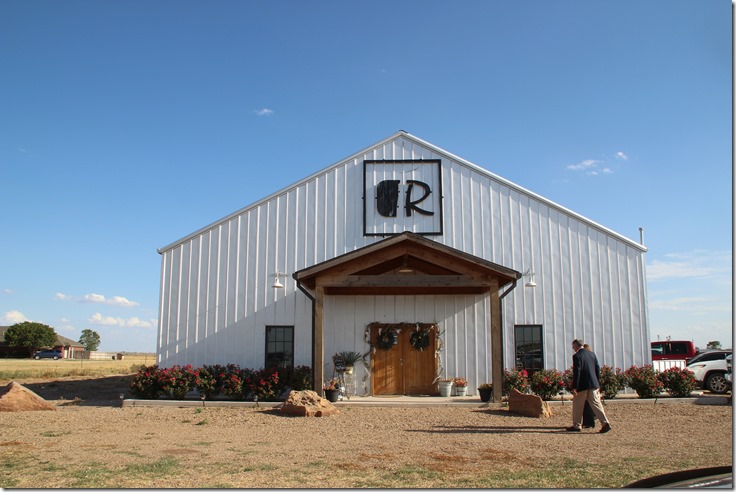 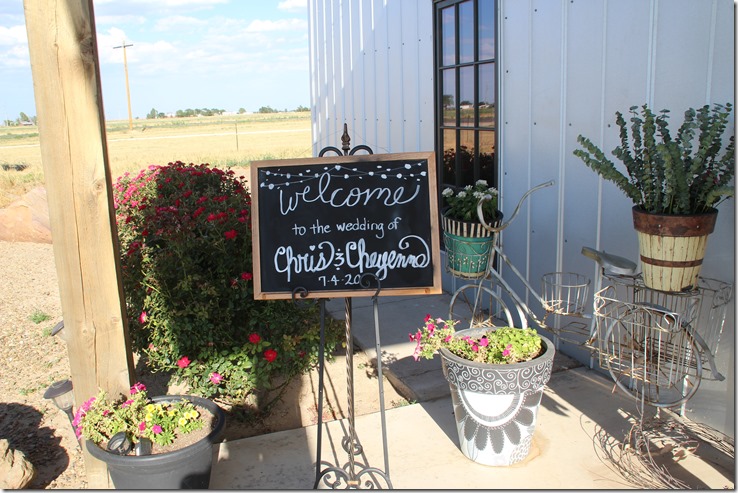 The couple were married by Reverend Tom Carter, recently retired from the Muleshoe First United Methodist Church. The couple wrote their own marriage vows and had fun sharing them. 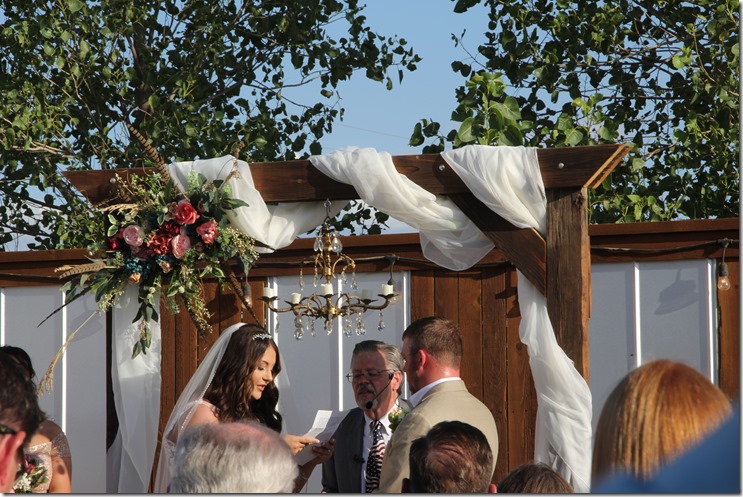 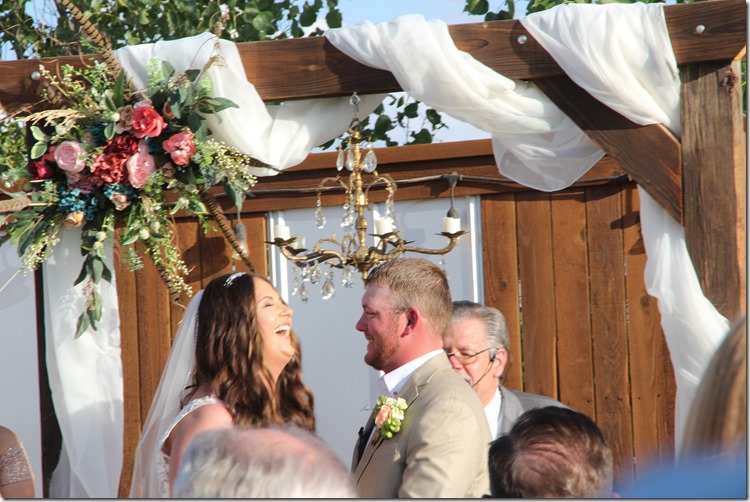 After the ceremony, while the wedding pictures were taken, we all retreated inside to the air conditioning and the meal and then enjoyed all the traditional wedding rituals: the toasts to the couple, the first dance, the dance with parents, the tossing of the bride’s bouquet, the removal and tossing of the garter, the cutting of the cake, made by Rosa Campos, all the things you might expect. 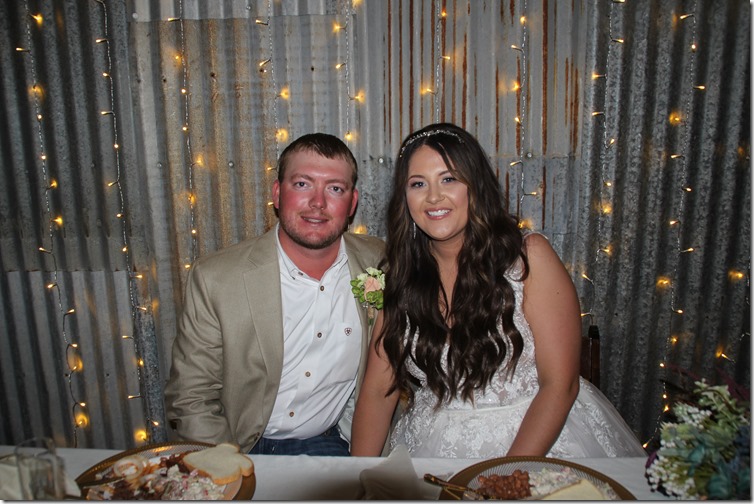 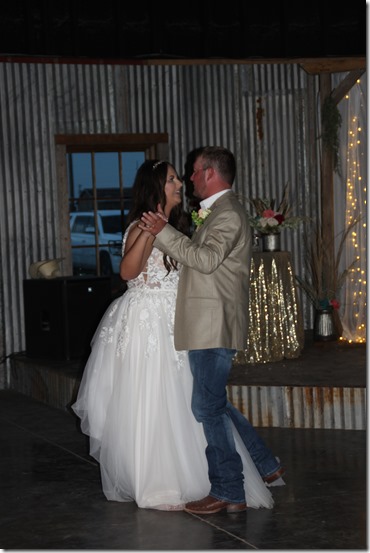 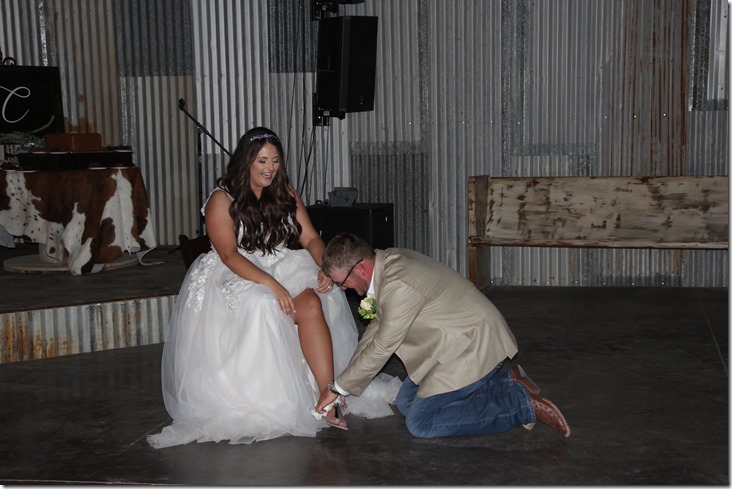 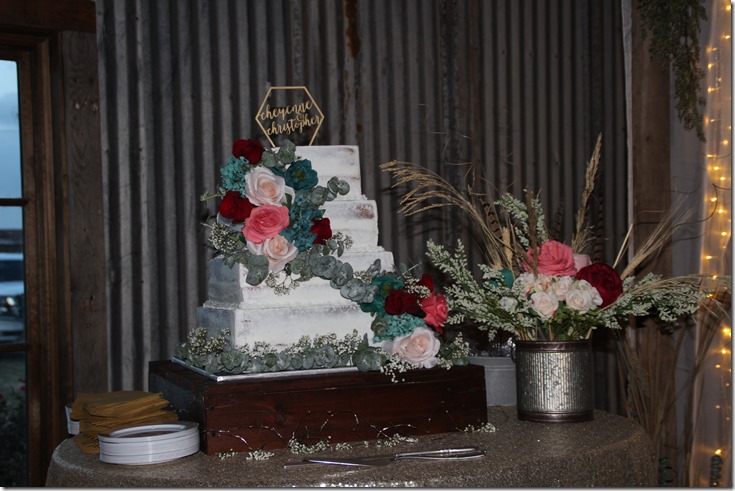 My grandson Colten was a groomsman, and I enjoyed seeing him be a part of the wedding since Chris was one of his first friends when Colten and his mother moved to Muleshoe. 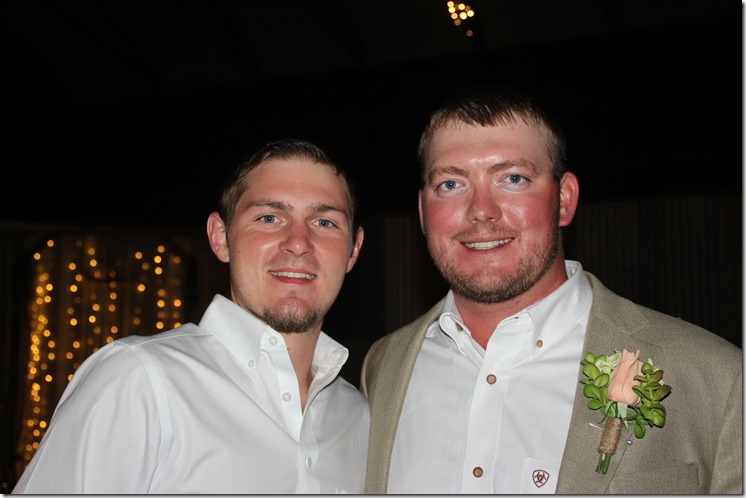 Considering the wedding took place on the Fourth of July, it’s only appropriate that it end with fireworks, right? So we all made our way outside to the front of the building to watch the impressive display arranged by Jackson Myers. 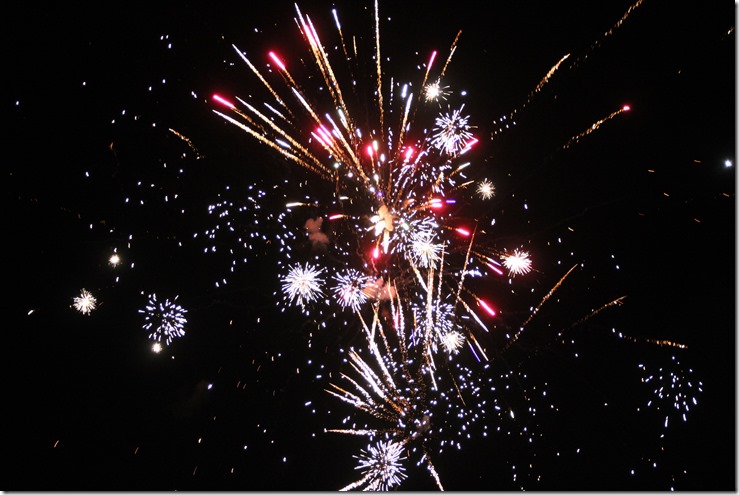 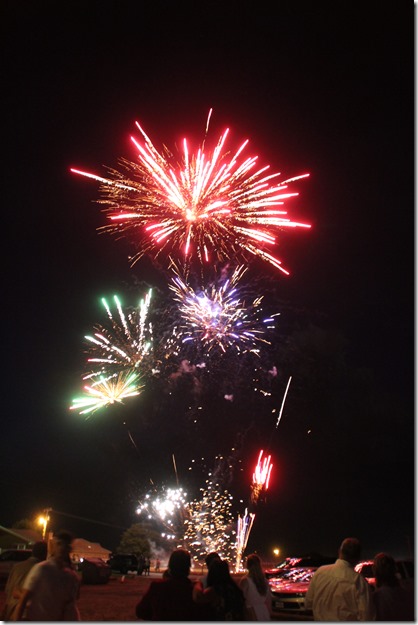 And if we turned around to look behind us, we could also see the Chamber of Commerce and City of Muleshoe fireworks display, which was not called off, going full blast at the new city park. 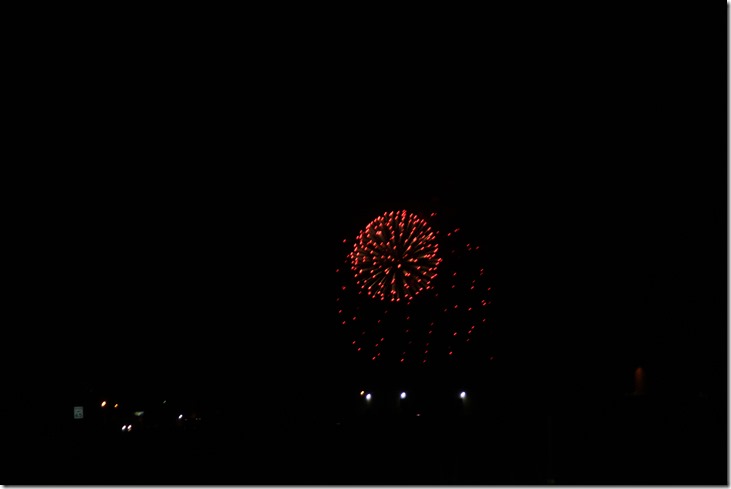 Not done with the influence of July 4th, the bride and groom were sent on their way, not with the throwing of rice, but with a gauntlet of sparklers. How appropriate! 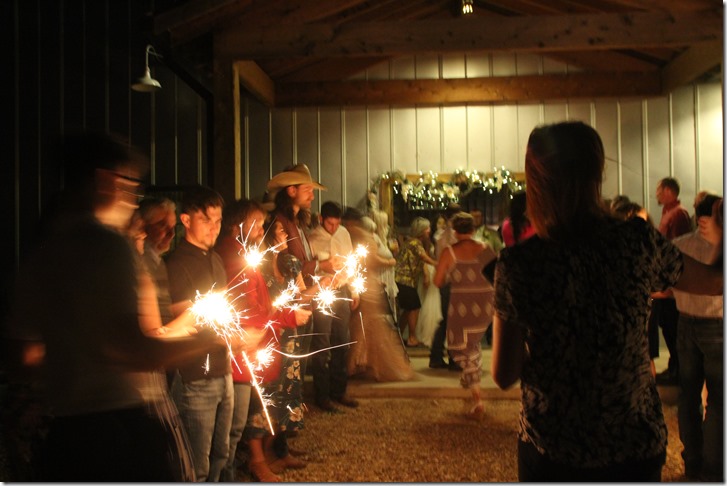 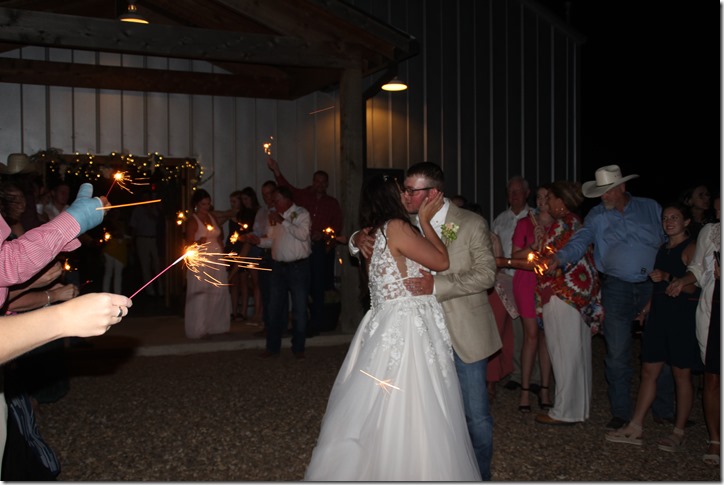 As I drove home afterward in that exceptional full moon, I had a hard time driving while trying to watch all the fireworks going off around me! When I turned off the highway to my house, I realized why I was seeing so many aerial fireworks. The two, or is it three?- fireworks stands located a little past my turn were doing a booming business! 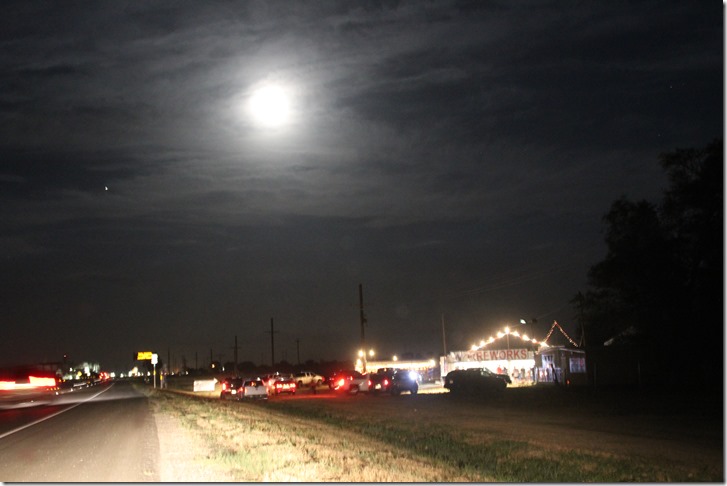 So we lost our parade, but we had other ways to celebrate being an American. Hope you had a pleasant and happy Independence Day.

My thanks to Gabby Perez, Andrea Alfaro, Carina Reyes, the Cage family, Janis Morrison, Carolyn Johnson, Denise Dunham, Angela Reyes, and Nellie Zaragosa for their help with this story.