Another Graduation to Remember

After three date changes, granddaughter Maya finally had her high school graduation. This was going to be our first experience with a virtual presentation, thanks, of course, to the coronavirus. We could have stayed home and watched it on our TV, or computer, maybe, provided we could figure out how to find the link before it was all over! But we wanted to congratulate her in person and be a part of her big day, so we drove to Kyle for the big event.

This was billed as an “In Person Event,” but that was only in person for the two guests each senior was allowed and given two fancy credit card-type tickets with which to get their guests in the gate. Naturally, those two guests needed to be Mom and Dad; her brother Ben didn’t get to go, so he was home to find the link and watch with us. And while Erin took pictures there, I took pictures of the live stream on the television. 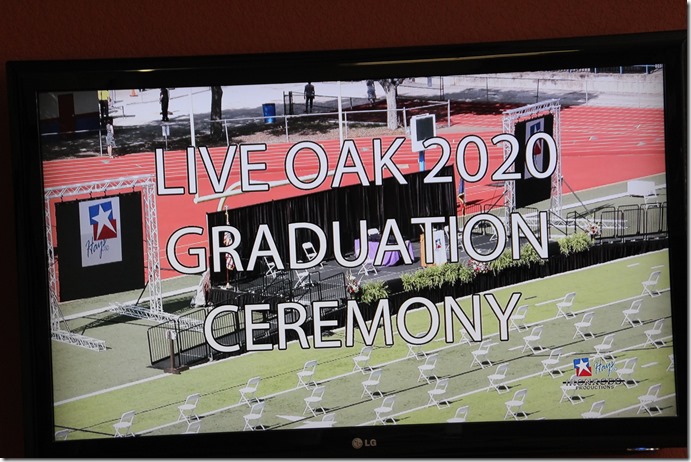 Some of my pictures turned out pretty good, but some didn’t, as occasionally the streamed video wasn’t always clear itself, so thank goodness Erin and AJ were there to take pictures as well.

Live Oak Academy is in the Hays Independent School District; commencement ceremonies were scheduled for Hays High School that night and Lehman High School the next day, all in Bob Shelton Stadium, all In Person for two and providing a virtual version for those at home. 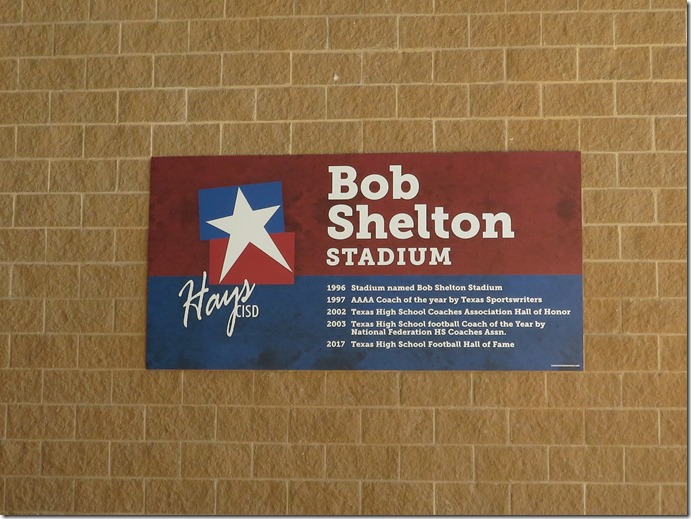 Ben had everything ready to go, and we watched for Maya as the graduates entered the stadium. The masks made it hard to recognize the kids, but we found her! The one holding the bottle of water. 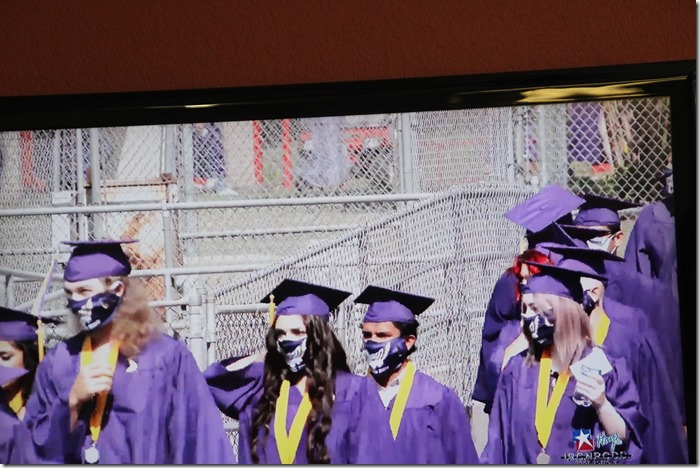 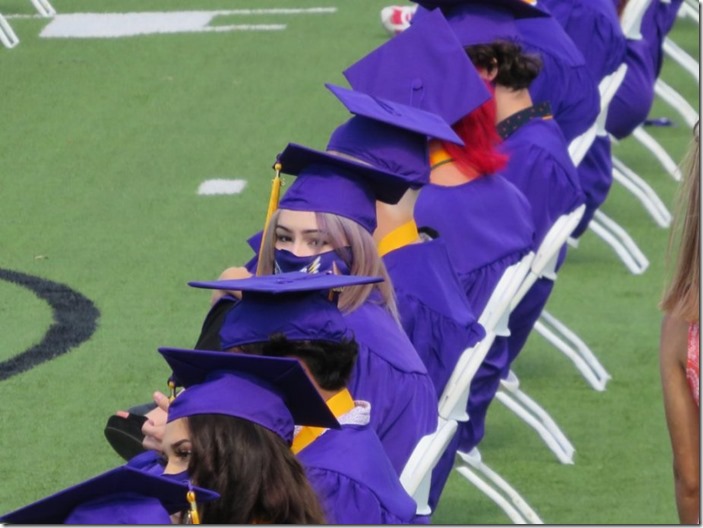 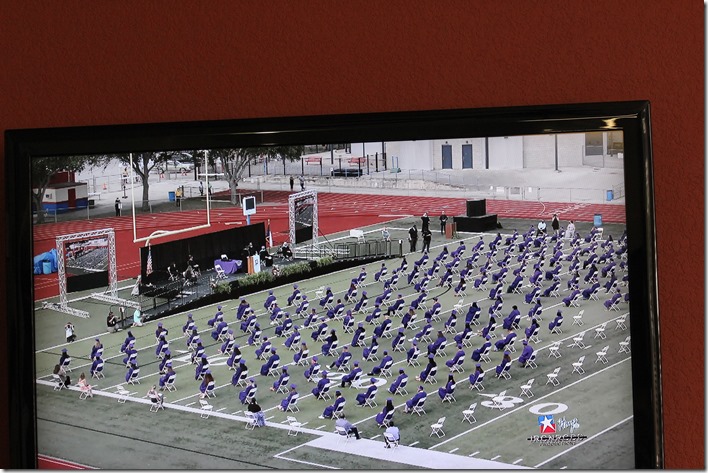 This was a formal affair, despite the masks and virtual presentation, complete with a nice four-page program, and while it had no official commencement speaker, Antonio Cueva gave the greeting and led the Pledge of Allegiance, and the Honor Graduate, who I think would be the Valedictorian by another name, Zoe Elizabeth Sharkey, spoke. Both felt the need to give short speeches that reflected their political beliefs, which they were allowed to do by the school administration, which also had a disclaimer in the program stating that any content in their speeches was the private expression of that student and not that of the school administration or other students. So that was a bit different and perhaps typical of an urban school.

Awards, scholarships, and student recognition followed the Honor Graduate’s talk. Keep in mind this is all taking place in June in the Hill Country. It’s hot. And humid. And if you look closely, you can see how a couple of  students kept as cool as possible during the ceremony. 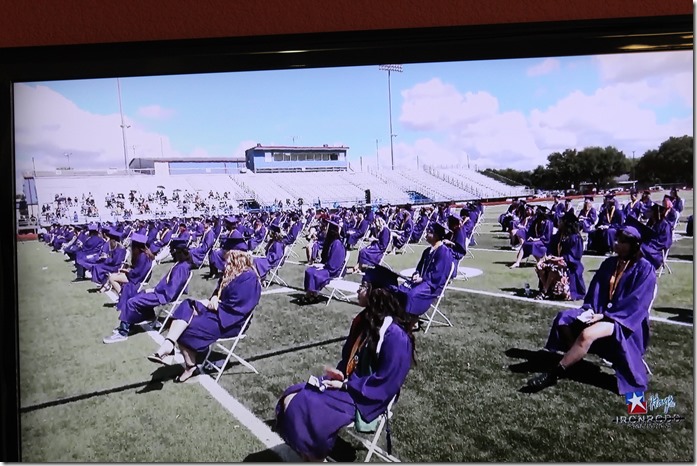 Superintendent Dr. Eric Wright presented the Certification of the Graduates and the awarding of the diplomas came next. This went fast; Maya’s name came somewhere about in the middle of the two-hundred and thirty-seven names, and we almost missed her because the name of the student receiving the diploma was not exactly in sync with when they started walking across the stage. But between the two of us, Erin and I got a couple of shots. This picture doesn’t show it well, but they also had a small screen in the lower left hand corner that showed graduates’ faces as they left the stage. I cut it off, focusing instead on Maya being handed the diploma. Thank goodness they had an official photographer down there to take a good shot of the exchange. But I don’t have it yet to share. Because of the virus, Mr. Agnew, the principal, bumped elbows instead of shaking hands, but more than once it was obvious he really wanted to hug the kids as he congratulated them. 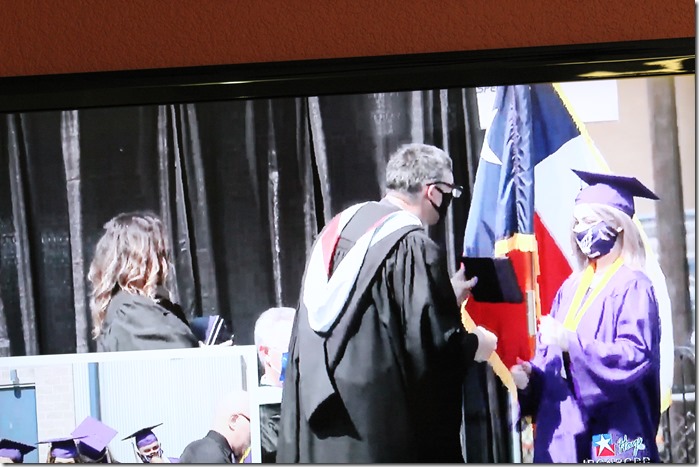 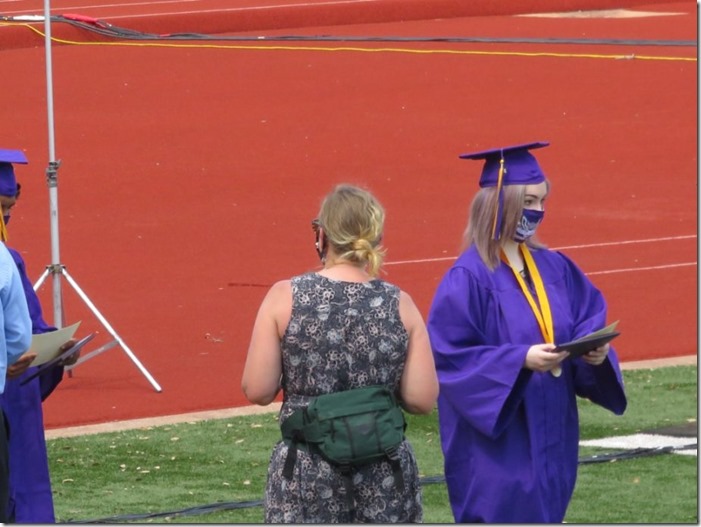 In the program, the Rite of Passage-Turning of the Tassel was next. Graduate Avery Sophia Borrel did the honors, leading the graduates in moving the tassel from right to left. No school song was played and caps thrown, but a few were spontaneously tossed in celebration. 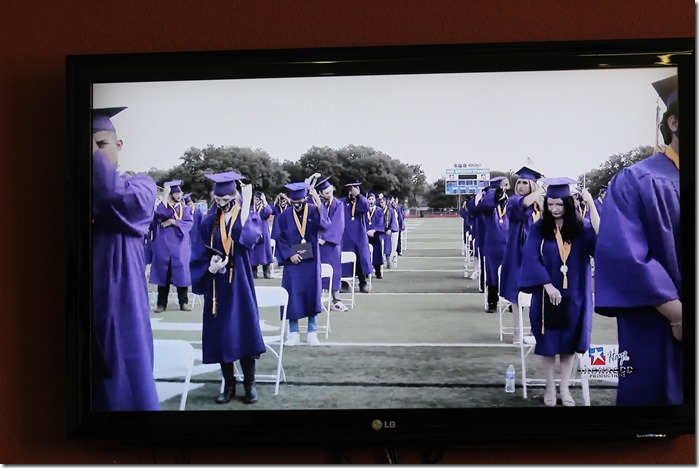 And then, it was over. Ben and Frodo relaxed, and we waited to congratulate the honoree when she arrived home. 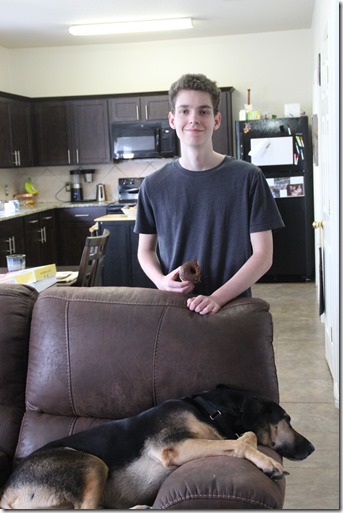 We also had a close look at that diploma, so long in being presented! 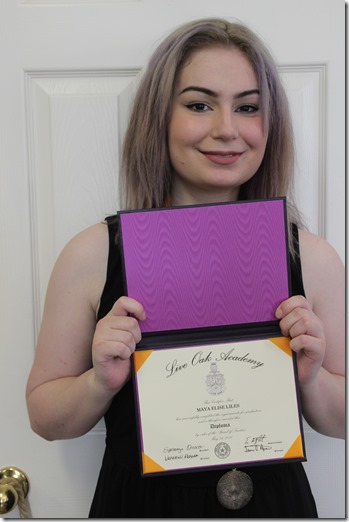 We then enjoyed a lovely meal and talked about the future, which includes attending Austin Community College in the fall.