Every time I drive to town I pass two fairly new prairie dog communities, don’t know if they are large enough to qualify as a prairie dog town yet, but it’s always interesting to see the activity going on. Chubby brown critters scampering here and there, others sitting upright on their broad little bottoms, either scanning the horizon or nibbling on a snack of grass or something else. I always look to make sure there is still activity going on as I fear for their safety; prairie dogs aren’t always welcome newcomers. 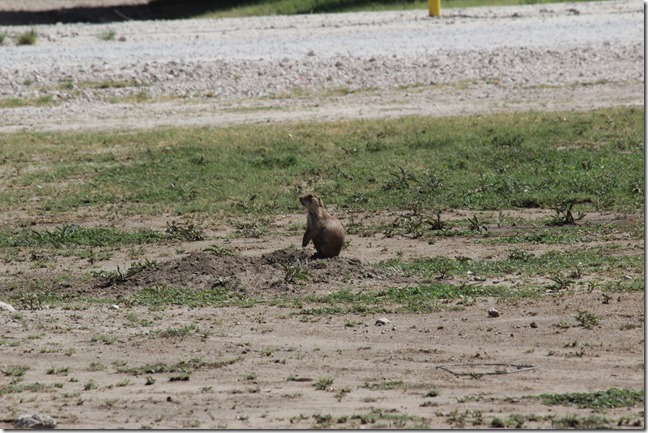 But just how much do people know about prairie dogs? They really do have an important place in the balance of nature and are  smarter than you might think. Our black-tailed prairie dog, Cynomys ludovicianus, ranges through the Great Plains of North America west of the Mississippi River from the Canadian border to the Mexican border and like living in higher altitudes. Lewis and Clark even described them in their travels. They are classified in the rodent family and are herbivorous, eating grasses, roots, seeds, and occasionally insects. Their elaborate tunnels and burrows provide protection while controlling their body temperature, which probably is the reason these prairie dogs don’t hibernate like some of the other varieties do. 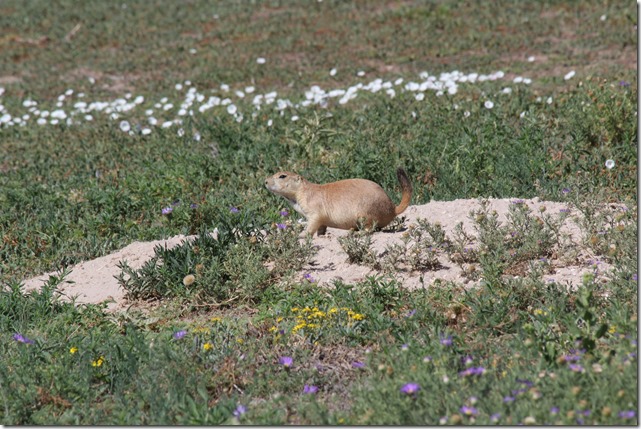 These tunnel systems help channel rainwater into the water tables, help control run-off and erosion, and can change the composition of the soil where cattle grazing has created compacted soil. Betcha didn’t know that!

Tunnels can have up to six entrances, and these entrances are rather sophisticated structures for an animal not given much credit for architectural know-how. Some are flat holes while others are surrounded by piled up mounds of dirt. Dome craters are mounds 8-12 inches high, and rim craters are mounds 12 inches and maybe higher. Both provide protection from flooding, but they also create ventilation systems; air enters through the lower dome craters and exits through the rim craters, creating a breeze. Same idea as tall narrow windows upstairs and downstairs and an opening in the center of the roof in old Victorian homes pre-air-conditioning. The tunnels have nursery chambers, winter chambers, and flood-protection sections. 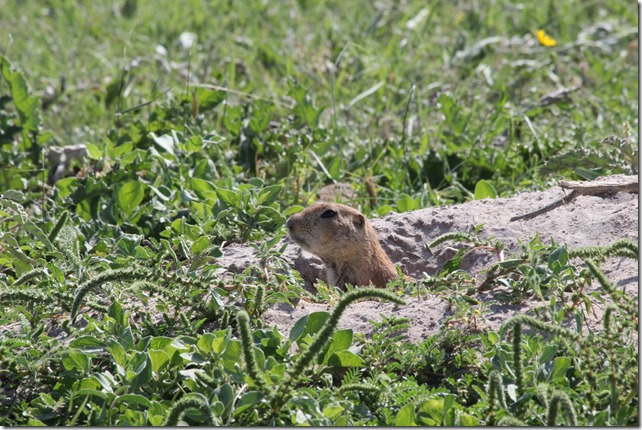 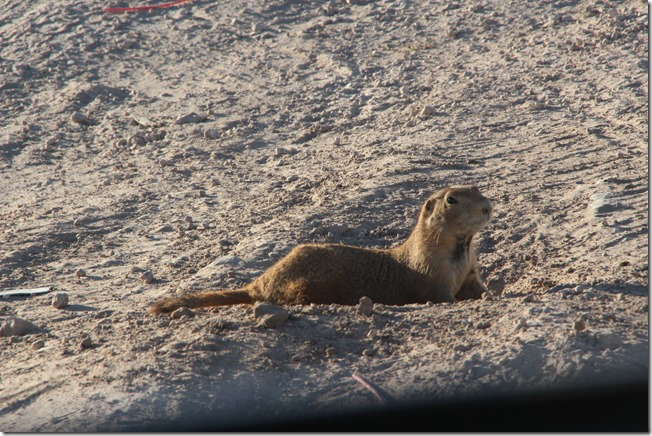 Prairie dogs have families of one breeding male, two or three females, and children who hang around a while before venturing off to start their own families. These families are territorial, with established areas that they defend and fight over. Moms make nests and raise the young while dads maintain the burrows and defend their areas. Babies are fully grown in five months, and their life span is three to four years.

And while they defend their own territories, prairie dogs also help defend the whole town against predators with a pretty sophisticated system of vocal communication, and in the case of the black-tailed prairie dogs, a pretty distinctive body language while yipping or barking, which I suppose, earned them the name of prairie dog since their chatter sounds a bit like a dog barking. Black-tailed prairie dogs stand tall and then throw their heads and front feet up into the air while barking. Different sounds they make warn of specific predators, implying they have some highly developed cognitive abilities for an animal looked down upon because they are in the rodent family. For example, studies have shown different reactions and sounds to different predators. After humans are identified with one call, the dogs retreat into the burrows. Real dogs they identify with a different sound and observe and watch carefully while other predators send them into hiding after a sighting. Studies have also brought up a debate as to whether this alarm-calling is to protect just their families or to cause confusion and panic in the other families, thereby making them easier prey.

This is not my best picture, and I found it hard to catch them calling the alarm, but look closely and you can see the prairie dog in the middle of the picture sounding the alarm. When they do this, their bodies do leave the ground as they jump up and yip. 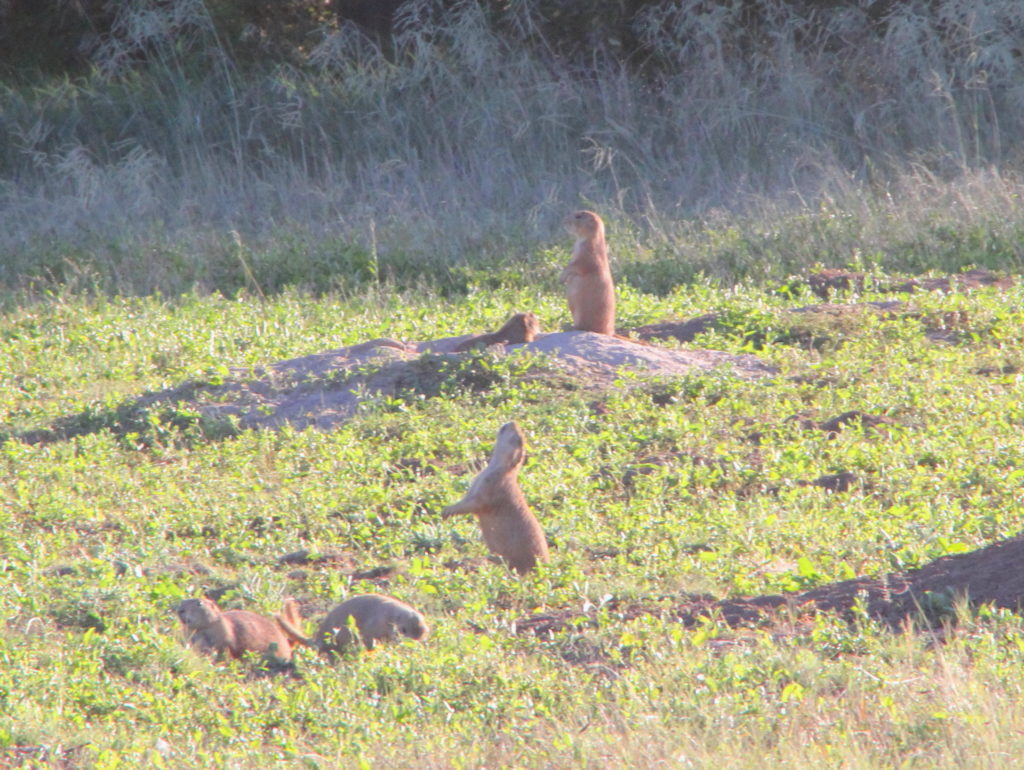 As much fun as they are to watch, they aren’t welcome in yards and pastures. and there are ways to keep them at bay without annihilating  the whole town, and we’ll get to why that’s not a good idea in a minute. I spoke with Jude Smith at the Muleshoe National Wildlife Refuge about ways to keep prairie dogs in acceptable areas. Prairie dogs have dichromatic color vision, which would be color blindness in humans, and this somehow helps them see predators at great distances, so they like to be able see those distances; therefore if you create barriers impeding that view, they don’t chose to live there. Smith said they have had success erecting snow or sand fences between prairie dog towns and pastures, use a controlled burn to clear off a portion of land on the other side of the fence, and the dogs will chose that land for their town. Also, they generally won’t settle in CRP fields because of the high grass or other places with tall vegetation. Crop fields tend to be left alone because the plowing and other farming practices make them less desirable. 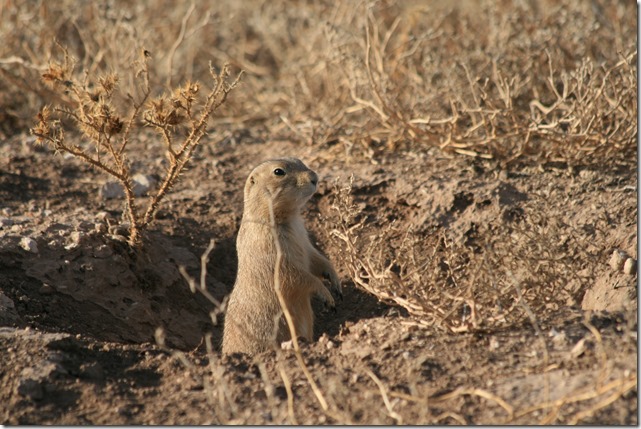 It’s no secret that prairie dog towns have been wiped out by bubonic plague occasionally. Fleas that carry the bacteria can also be found on foxes, coyotes, rabbits, and other wildlife, and sometimes the fleas get on prairie dogs as well. This may sound scary, but it isn’t a real health threat to humans because we don’t come in contact with these animals, and they don’t all carry the fleas that carry the plague. Controlling fleas and ticks on our domestic animals keeps them and us safe, and dogs in town are generally not susceptible because they aren’t around wildlife that might have the fleas. 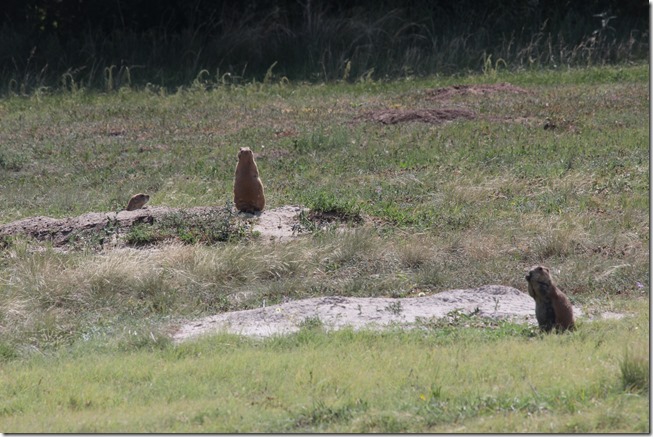 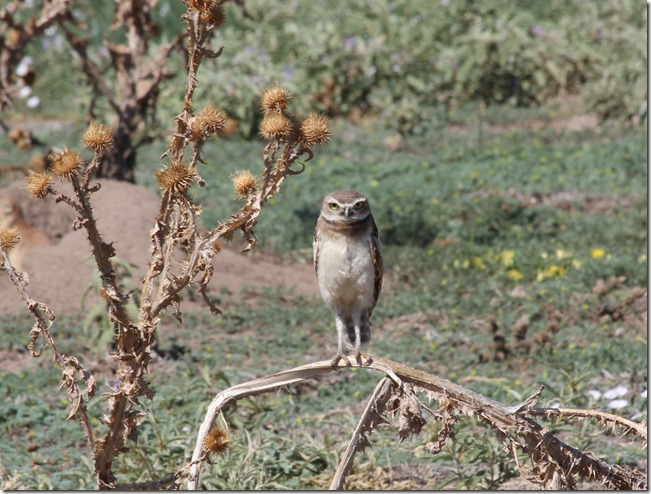 In fact, either by providing a home or becoming a meal, prairie dogs benefit approximately 150 other species that would suffer without them. When bison roamed the plains, prairie dogs tended to be migratory and likely followed the herds around because the bison helped graze down the grass allowing good distance vision for the dogs while the dogs helped control the brush and keep soil loose. Even now, pronghorns, mule deer, and bison show a preference for grazing on the same land used by prairie dogs. Cattle, horses, and other hooved animals protect themselves by not walking over a burrow hole and injuring a leg. 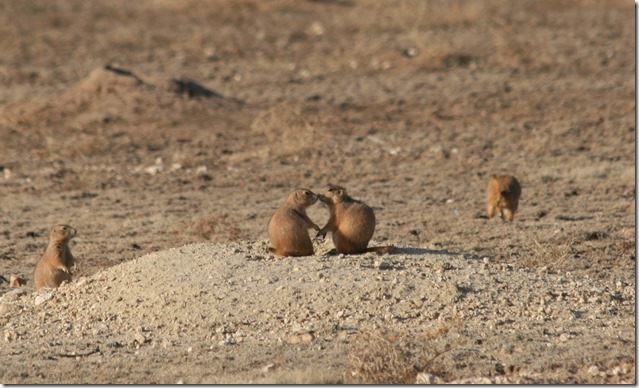 For all these reasons and more, prairie dogs are considered to be a Keystone Species because they have an effect on the natural environment and play a critical role in maintaining an ecological community and affecting many other organisms in that ecosystem. In other words, helping maintain the balance of nature. 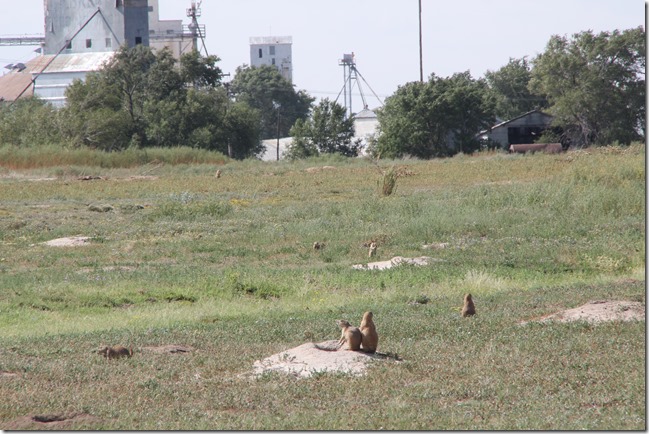 All animals have their role and play their part in that balance of nature, whether it’s a role we understand or even recognize. You may not realize how upsetting that balance might affect you or someone else, but it will have an impact. For example, if those hawks and eagles don’t have prairie dogs to feast on, then they will turn to preying on other small animals, like lambs, kids (goat babies), calves and domestic cats and dogs. If we take out all the mountain lions who prey on small wild animals and some larger ones, like feral hogs, then we will see over-population of those animals. Feral hogs, descendants of domestic pigs allowed to run wild, by the way, are one way that man has already managed to upset that fragile balance. Kill all the coyotes, and we will be overrun by jack rabbits and cotton tails. Kill all the snakes, and we will have more mice and rats which carry the hantavirus and other diseases. And the list goes on, but you get the idea.

One reason we are seeing more prairie dog towns close to the city limits is that they are losing their habitat, thanks to man, and naturally look for some place else to raise a family. Just like deer, they are showing up in places where they become a problem. But you know what? They were here first. We are taking over their homes with our homes, so what do we expect them to do? We have to have a place to live and work as well, but somewhere there has to be a compromise we can all live with. And killing off the prairie dog is not the way to do it. Fences, tall vegetation, and allowing them certain places to live are some of those compromises.

Animals really were here first, you know. Just read the first chapter of the book of Genesis. Man was created after everything else was put in place, and then man was given dominion over it all. But with that dominion comes the responsibility of being good stewards of the amazing world of nature we were entrusted with. 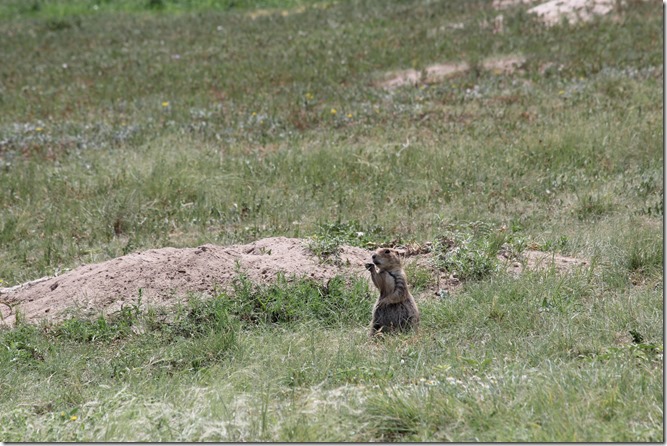 Prairie dogs are a part of that world.

Thanks to Jude Smith and Woody Minnich for helping with the story.