Close Encounters of the Wildlife Kind

We had a visit from a possum last night,  those much-maligned marsupials that look like a large rodent with thin hair. This is not the first time they have visited, of course. A few years ago, two little babies played possum in the fern bed as I routed the dogs away from finding them. When I came back out, they were gone.

When we lived in Edna before moving here, my washer and dryer were in the utility room in the attached garage. I had to go out the back door through a breeze-way to this room to do the laundry. That was also where the cats had their outdoor stash of dry food. I went out one night after dark to put the washed clothes in the dryer, the washer on my left; the dryer on my right. Without paying much attention, I started moving the clothes from the washer to the dryer and was vaguely aware I was not alone. I looked up and there was a possum transfixed in front of the cat food feeder which was on top of the dryer. I think we both reacted in unison- I squealed; he hissed, both of us recoiling from the other, and we just looked at each other for a minute, after which I left the washer and dryer open and retreated to the house. Other than surprising the fool out of me and donating a little cat food, no harm was done, and he was gone when I went back out.

Now, fast forward to 2017 in Muleshoe to our garage and Minnie’s bed and heat lamp situated on top of a defunct chest deep freeze. I went out for something and thought Minnie was in her bed, but something didn’t look quite right. I walked over for a closer look and found an adult possum curled up, cozy and warm, in the bed. He played possum for me as I went back in the house for the camera and was perfectly happy for me to take his picture. Bill gathered him up a bit later and drove him down the road to let him go. 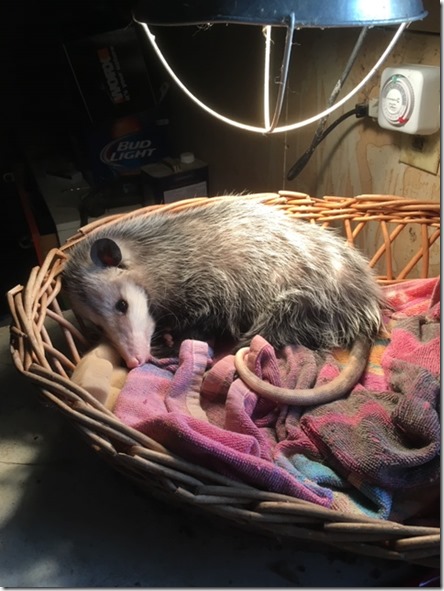 Minnie’s bed and cat food were a treat for this guy. Opossums eat dead animals, frogs, insects, rodents, and birds, but they also are known to clean ticks off their own bodies and eat them, which may not sound pleasant to us, but this also means fewer ticks for us to deal with on our domestic animals and possibly on ourselves. We are talking maybe up to 5,000 ticks in a season, according to one source. They do have their place in the grand scheme of things, so be a bit more tolerant of the little critters. They really don’t hurt anything and do help with the road kill and ticks and other insect pests.

This got me to thinking about other wildlife I have encountered quite by accident, like the badger I ran up on when we lived in the Janes Ranch House outside of town before it was moved to the Heritage Center. I was taking my daily run down the dirt road in front of the house and could see in the distance something on the side of the road in front of me. I slowed down, whatever it was stopped, and when I was close enough to realize it was a pretty darn big badger, I stopped. We eyed each other. Seems like he showed a few teeth. I was not sure what to do. He was between me and the safety of the house in the distance, and I didn’t know what to expect from this animal. I figured the best strategy was to keep my distance and not act aggressive. So I very carefully walked a big semi-circle around him, watching for his reaction. He never too  his eyes off me, but just watched as I gingerly made my way around him. And then took off down the road. I never saw him again.

I also came up on a really big, fat, healthy rattlesnake on one of my runs. He was stretched out making his way across the road, or perhaps just sunning, as I headed home that day. Why is it these animals always showed up between me and the house? Anyway, I stopped and so did he. He never coiled, and I used the same strategy with him as with the badger. No quick movements, no aggressive movement toward him, and I walked way around him, making sure I was about three times as far from him as he was in length; he was maybe four or five feet long. He just stayed put; maybe he was playing possum as I made my way around him, but he watched me go as I felt it was safe to run again.

I told you the story about the coyote in the tree that night (“The Surprise in the Elm Tree,” January 3, 2019), whose identity as a coyote or a fox is still being debated. I guess that’s about as close as I have been to either one of those animals, but seeing the green eyes reflecting back at me that night was an interesting experience. Porche Dog did tree a fox in the daylight once, but I didn’t get a picture of that. And I have listened to the eerie other-worldly songs of the coyotes out our back door on cold, still nights.

We have seen very few snakes where we live now, one rattlesnake and a few bull snakes and hog noses, which are good to have around. As a kid I was known to catch hog nose snakes and scare the devil out of my mother with them. I was weeding back in the pasture once, squatting on the ground, and a pretty little snake quietly slipped past me. He had a lot of black on him, but wasn’t one I recognized. 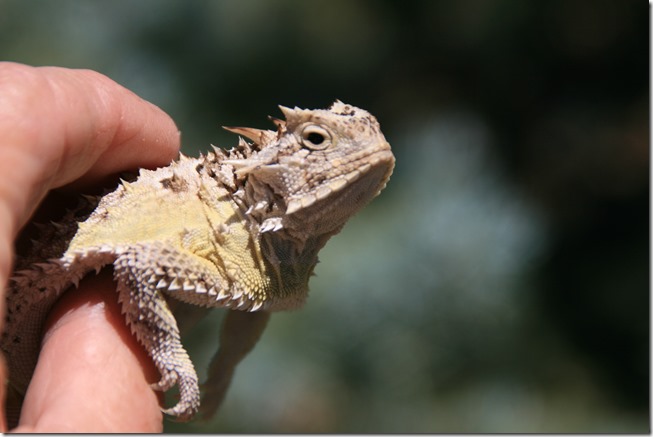 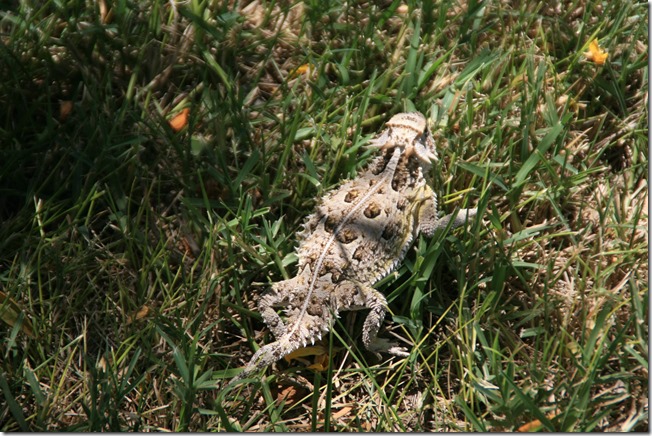 And be careful where you step in the spring. Babies are hard to see! 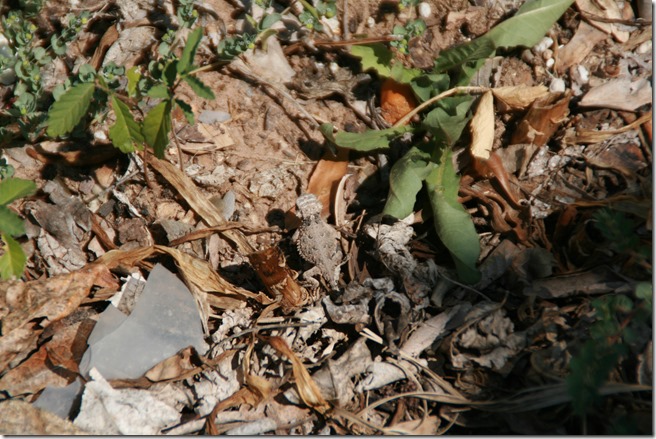 We share our space with so many animals, and I love these brief little encounters I have with them. And they all have their place in the world even if they all aren’t beautiful and cuddly. I think we should give them more respect and learn to live with them.

After all, they have had to put up with us in their space.