Pat Angeley invited me to go with her to the Trans-Siberian Orchestra extravaganza in Lubbock last week. She had seen them before; I had not.

We arrived early because we knew parking would be frantic, and it was, but we managed a fairly close parking space with a short walk to the United Spirit Arena. Pat said she had read that the performance had sold out, but the seats didn’t seem to be filling up very fast. As the time passed, the seats were still sparsely filled. About ten minutes before the show was scheduled to start at 7:00, people finally started showing up. Seven o’clock came and went, seats were still empty, and nothing was happening on stage. I am a firm believer in not punishing the prompt, so I was a bit hacked that the band or whoever was in charge had not bothered to dim the lights and get things going. We made it there on time; we planned ahead to deal with the crowded parking situation; everyone else could have, too. 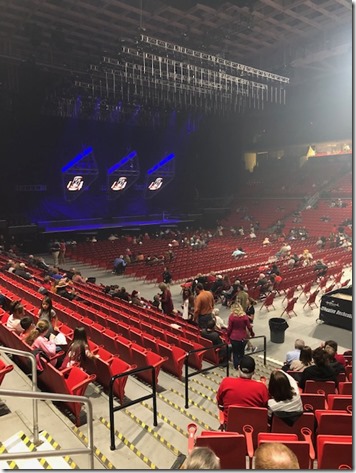 Of course, I don’t know if the people in charge were holding off till most of the seats were filled or if a problem backstage caused the delay, but finally at 7:15 someone showed up on stage to greet those of us responsible enough to get there on time, make a few remarks, and then present Christy Hartin, KCBD-TV news anchor a check for $6,000 to donate to the UCanShare Food Drive the station sponsors every Christmas. Turns out the orchestra donates a dollar or more for each ticket sold to a local charity, and the timing was right for it to be the food drive on this visit to Lubbock. I appreciate the band using part of their ticket sales for charity donations, and they do this at every concert they perform.

People are streaming in by now and blocking the view, running into each other, and in general, getting in the way. I guess about ten or more minutes pass before the lights dim, the leader of the band comes out to pump up the crowd, our seats vibrate to the music. lasers scan the arena, and here we go! 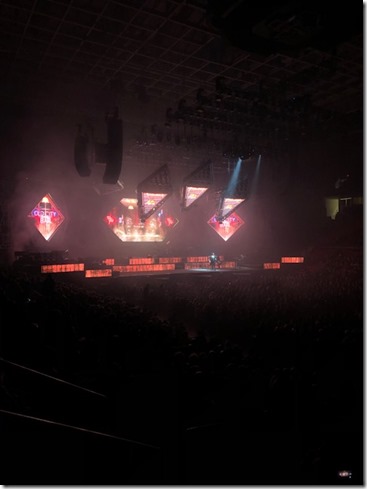 The band, orchestra if you will, since they have a string section, consider themselves a progressive rock band that strives to push the boundaries of heavy metal, rock opera, and whatever else they can come up with to provide an all-encompassing performance. And perform they did. “Christmas Eve and Other Stories” was the title of this year’s show and it started out with narrator/story-teller Phillip Brandon on stage, smartly dressed, describing the scene in Old City Bar, I believe it was called, on Christmas Eve. An image of the empty bar came up on video screens behind the stage and reappeared a couple of times during the show. I had a hard time understanding him and the song lyrics throughout the show, but Pat said he told the story of an angel flying over Earth and witnessing  sadness and unhappy people on Christmas Eve and then told the story through his narration and music of a girl lost in the bar and the mysterious man who encouraged people in the bar to come up with enough money to send the girl home. They do, she is sent on her way, and the man then magically disappears. Hope, angels, doing good for others, celebrating Christmas Eve and looking for the Christ Child-I did hear when some of these things were mentioned, and in our increasingly secular world, it was nice to know entertainers still wanted to share that story.

I didn’t think to bring anything to write on, so I failed to document the songs the band played. Truth be told, some of the carols and songs I probably didn’t recognize as they were belted out too loudly for my old ears as well as the fact that I was so engrossed in the lasers and video screen images I didn’t focus on following all the melodies. But I do remember “An Angel Came Down at Christmas,” and “March of the Toy Soldiers” from The Nutcracker. Pat said she remembered “Silent Night.”

But my favorite all night, in terms of music and special effects, was “Carol of the Bells,” which I believe they played again later in the show. That is one of my favorite Christmas songs, and the synchronized music and light show during this one were great. Confetti fell from above off and on during the song and when the lights hit it, it sparkled like glitter as it floated down on the audience below, who must surely have missed the beautiful effect it had since it was above them, and even if they had looked up, the effect wouldn’t have been the same.

I didn’t take many pictures because I have learned that when you focus on taking pictures, you miss a lot of what is going on. Besides, pictures of this show lose something in the translation since there is so much movement going on. So I choose to just watch  and enjoy the lasers, the moving trusses, the video images that changed constantly, the lighted rods that moved up and down in the air in the center of the arena, changing colors while moving in various design sequences. 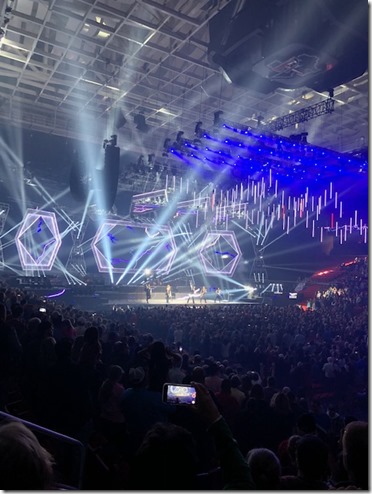 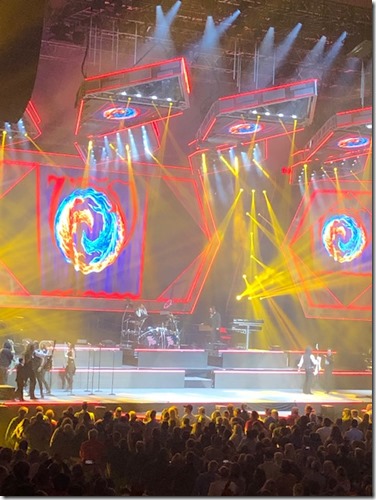 Besides all the lighted images that moved and changed on the stage and above it, later in the show pyrotechnics shot fire out on the stage  synchronized  with the music. Later in the show this large apparatus that had been covered rose up behind the seated audience and made static electricity and had fire coming out of the big ball in the middle. I don’t know what to call this thing and didn’t try for a picture while it was working, but I took this picture of it after the show. It does lose some of its magic when seen like this, but at least you know what I am trying to describe. And those of you with a science background will know what it is! 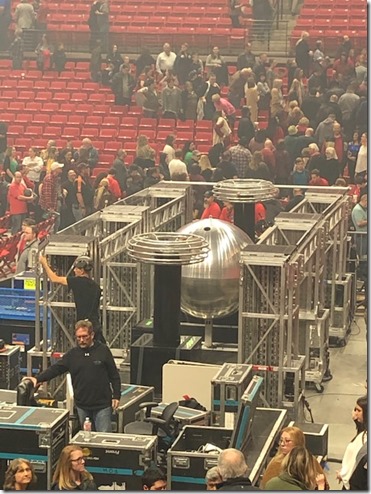 The two-hours plus performance was quite entertaining, and I was glad Pat offered to share the evening with me. It may not be your cup of tea, but seeing the show at least once is worth the trip. For optimum viewing, I would suggest you get seats on either side of the stadium rather than floor seating. Our seats were in the corner, and I thought they were just right.Those on the floor missed the real experience of all the special effects going on, like the confetti and the lighted rods moving in the air. The lasers looked prettier from a distance, too. This static electricity machine was better viewed from the rising seats as well. And if you are in the very back the electricity machine would block some of your view of the stage. Sitting too close to the stage would make the music just about unbearable for me, and I suspect for most people if they would admit it. I took  my old woman hearing aids out and also meant to take earplugs, but forgot, so I wadded up a piece of paper napkin for each ear, and that helped. I don’t know why sound engineers insist on making the music so loud it just becomes noise, but they always do. So be prepared.

And for heaven’s sake, get there on time!