The Week-End of the Book

I shared with you the honor of The Bright Lights of Muleshoe being deemed worthy of  shelf space in the Texas State Library and Archives as well as in the Texas Center for the Book in Austin. All of that earned me an invitation to the Fourth Annual Texas Authors Celebration at the Lorenzo de Zavala State Archives and Library Building at the State Capitol of Texas in Austin. The evening was sponsored by the State Library, the Texas Center for the Book, the Texas Book Festival, and the Writers’ League of Texas.

But wait-there’s more! It was quite a weekend with most of the focus on books and one day for plants. And both dogs made the trip this time, so from October 23-28, it was a full weekend.

Bill and I drove down to our place at Lake LBJ on Wednesday for the author event on Thursday, which Nola McKey and I attended that night. The Lorenzo de Zavala State Archives and Library Building is an impressive building right next door to the Capitol. 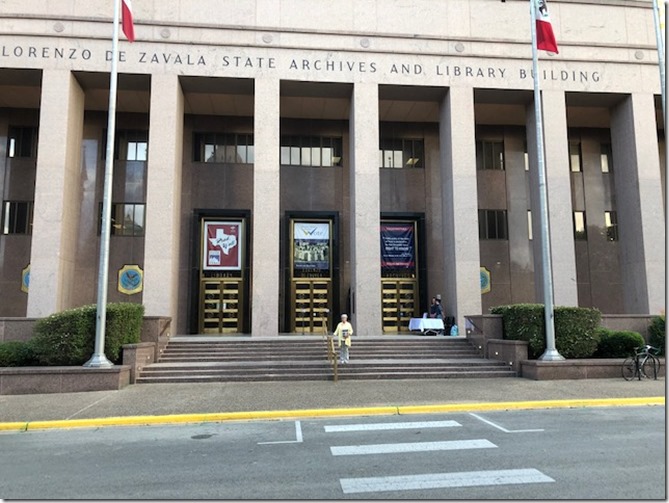 Cooper’s Old Time Barbecue catered a buffet meal and attendees were invited to look at exhibits and take tours of the library. One of the displays was of books recently added to the Center for the Book and the State Library and my book was one of them on display! Just in case you don’t see it, it’s the second book from the left on the top of the bookcase. 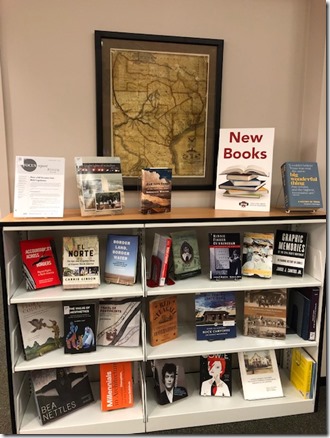 Mark Smith, Director and Librarian introduced Rebekah Manley, Coordinator of the Texas Center for the Book, and Andrea Lapsley, President of Friends of Libraries and Archives of Texas (not pictured), and the 2019 Texas Center for the Book Literacy Awards were presented. The Honorable Mention recognition and a check for  $500 each went to Inside Books Project of Austin, and the Teen Bookfest by the Bay of Corpus Christi, with the Literacy Award of $2,000 going to Books are GEMS from El Paso. 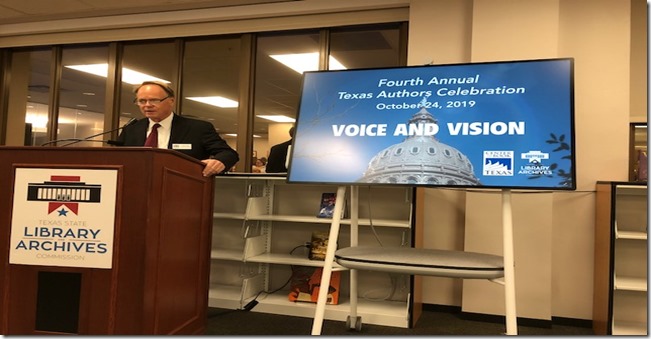 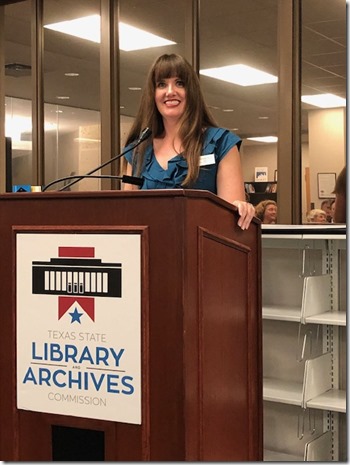 Louie Gonzales accepted the award for Books are GEMS after a video about the program was shown. 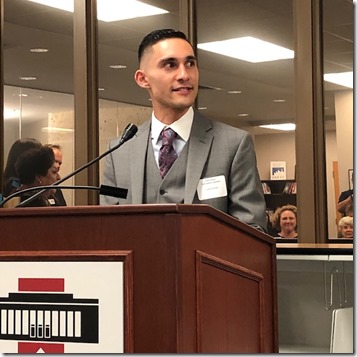 Next came the panel discussion moderated by Becka Oliver, Executive Director of the Writers’ League of Texas. Featured were Chris Barton, author, and Ekua Holmes, illustrator, of the 2019 Texas Great Read selection What Do You Do with a Voice Like That? The Story of Extraordinary Congresswoman Barbara Jordan. along with Michael Hurd, Director of Texas Institute of the Preservation HIstory and Culture at Prairie View A&M and author of Thursday Night Lights: The Story of Black High School Football in Texas. 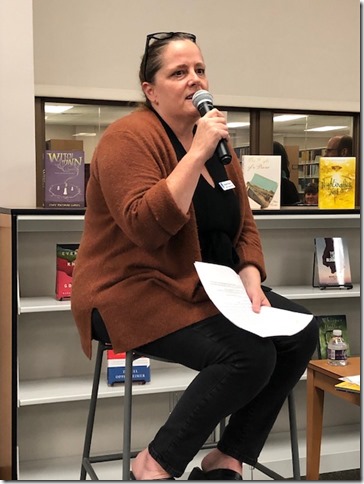 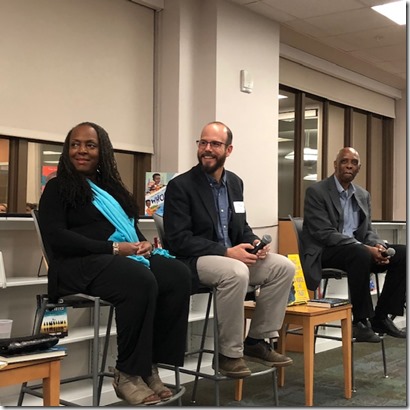 After we enjoyed hearing what the panelists had to say, it was back to the lobby of the library for desserts, book signings, and networking. I also signed the Author’s Celebration poster since I was an author of one of the “Voices and Vision” books now in the library. 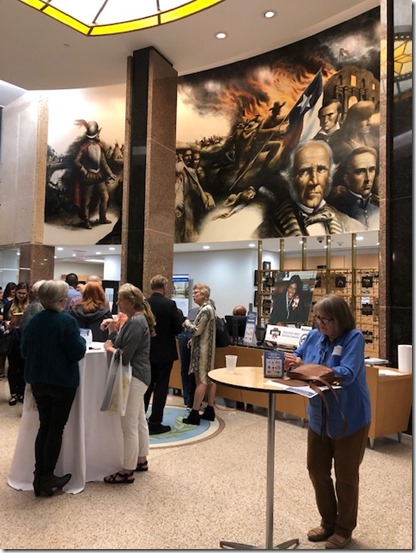 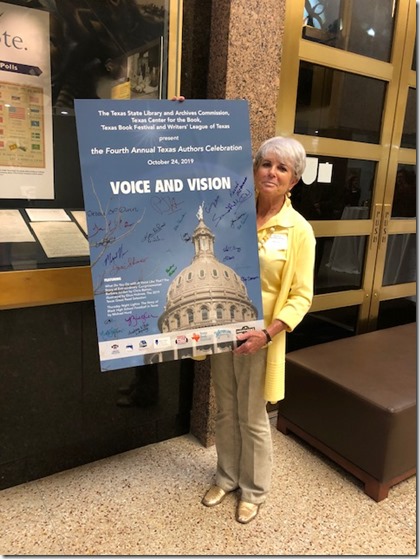 A very loud storm hit during the programs, and we braved the elements getting to the parking garage. As we were leaving, this is what the Capitol looked like, and I thought it was an interesting image. 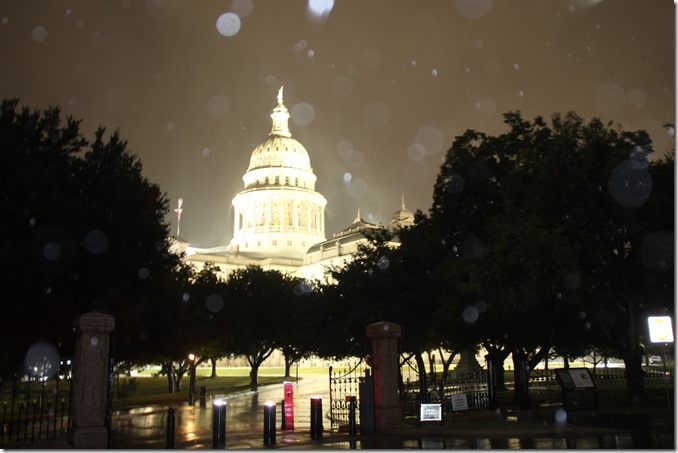 Then on Friday Nola had tickets to a live taping for the PBS program “Overheard with Evan Smith” of an interview with author John Grisham. As we walked in, we were face to face with the Austin City Limits sign, only to be told that they now tape that program at another site, but it was still interesting to see what you don’t see when you watch it on TV. It was interesting to be part of a live taping because, after all, it is live, and they redo things to get just the effect they want when it is shown on television. Unfortunately for us, however, John Grisham was facing the other side of the room, and we missed hearing much of what he had to say. 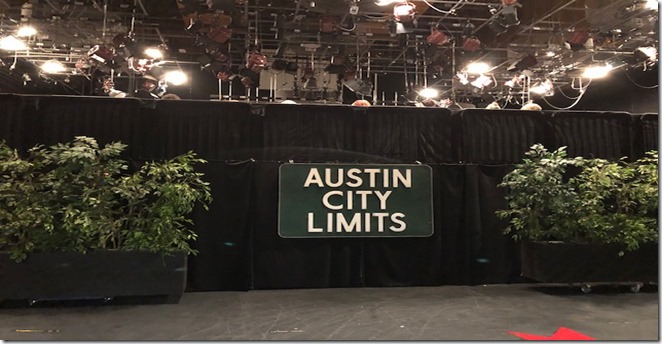 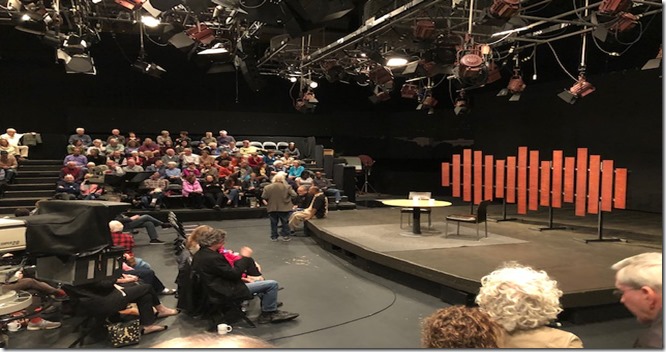 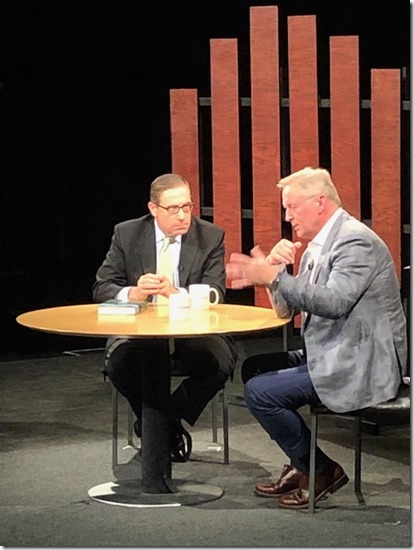 Saturday I sold plants at the Burnet Farmers Market, and it was cold and windy. Not real pleasant until about 11 o’clock when the sun finally warmed things up. But I sold some plants and met some interesting people, so it worked out fine.

Sunday I drove to Kyle to pick up my daughter-in-law Erin and we went back to the Capitol where the Texas Book Festival was set up all around the grounds. We listened to a couple of panel discussions, and I even had a chance to visit briefly with two former students, Amber (Green) and Stacy ()McElroy),  before going to the Writers’ League of Texas booth for a chance to sell some books. Didn’t sell any, but at least I had some interested onlookers stop and take a business card; maybe they will order one later. 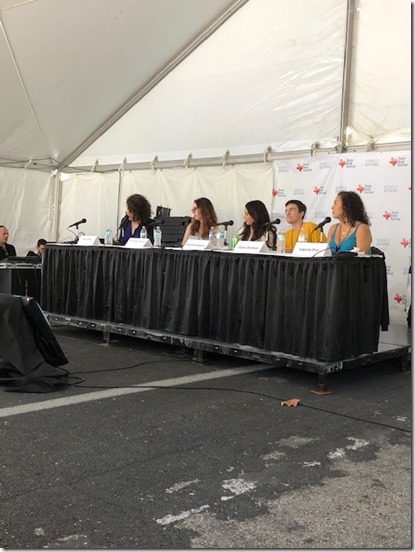 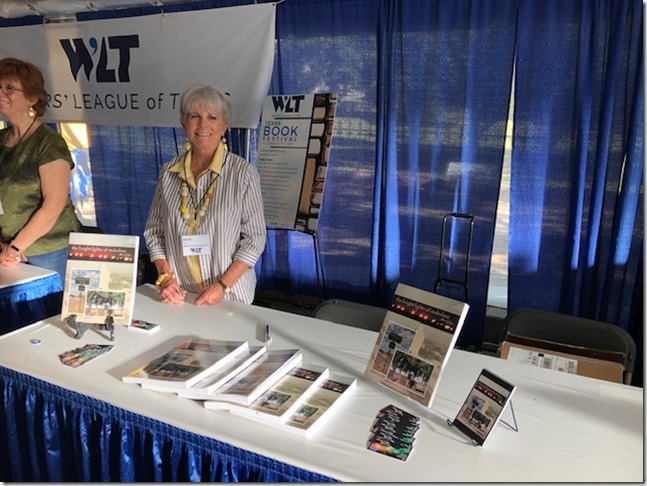 Three days of book-related events and one day of selling plants made for a pretty busy and long weekend. Covered a lot of ground in a short period of time. But it was worth it.