Time to Meet Frosty, the Newest Addition to the Family

Back in January of this year, Porche Dog chased a stray kitten up a tree at our house. Porche is not a bad dog; chasing cats just happens to be the nature of this beast, and she does it well. The kitten was, naturally, scared to death and cried when I tried to talk him down. Wasn’t going to happen, so I dutifully went out and bought a live trap, figuring it would be a good investment since fate tends to bring us strays who have to be tricked into being caught and added to the family.

It took two nights of bating the trap to be successful, but catch him I did on January 15th. I put him in the barn where it was warm in one of our extra dog kennels, plenty big for a little kitten. It didn’t take long to convince him that he was safe and that I was his friend. He responded to food and lots of time in my lap being petted and played with.

Bill, always original with our pet names-Tiger for our first Siamese kitten, Blackie for the black dog who befriended Caramel when we lived in the Janes Ranch House when it was still in the country, Grady for our first gray cat, Siam for our current Siamese- came up with Frosty because we had a frost when he showed up. Later I realized we could have named him Little Richard because they both have distinctive eye liner. 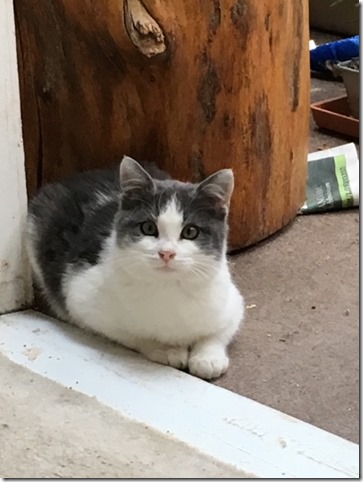 But Frosty stuck and he comes quickly when called, so the name’s a done deal. It didn’t take long before I let him out of the kennel but shut the pet door to keep him in the barn a bit longer. He had a great time playing but was always ready for some Frosty time in my lap. He was still a baby, of course, and apparently all that time in my lap cemented our relationship because now I am the only person he will let hold him and won’t hang around when we have company.

He had fun in the barn and thought the bombax tree was there for his pleasure. 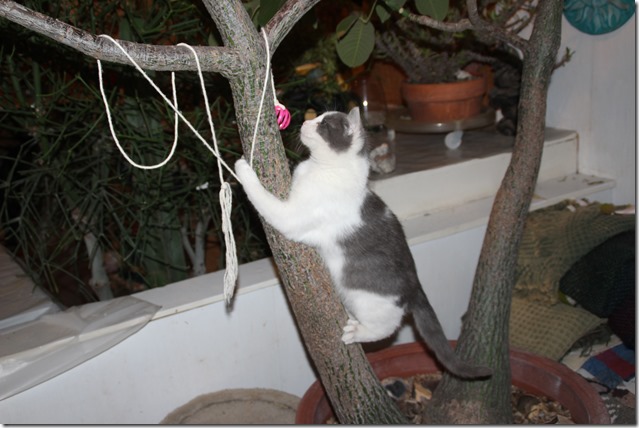 He discovered the big cats’ beds quickly and settled right in. 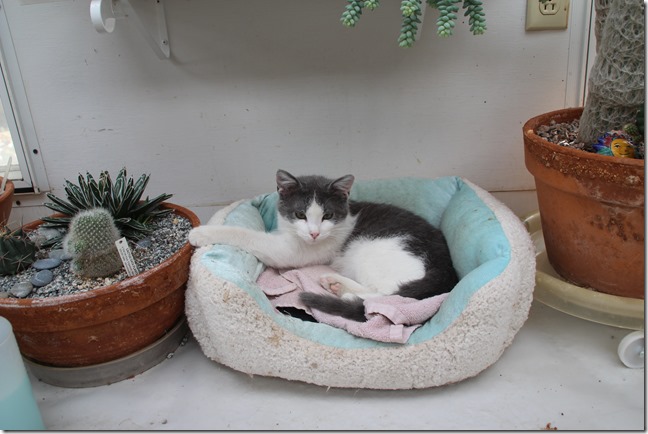 I reacquainted the barking dog and scared kitten and convinced Porche she couldn’t chase him anymore, so she hasn’t. But she’s a big dog and he’s still a little boy, and he would take hesitant jabs at her when she would walk by him. Porche would get this hurt look on her face and look at me and then shy away from him. He’s not such a little boy now, but still occasionally takes a swing at her, but she just ignores him.

Frosty pesters Minnie to death wanting to play, and she fusses back at him, but they have called a truce. Siam isn’t sure about him, and he tries to play with her, too, but that hasn’t worked yet. He and Wendy still haven’t made friends, and I can’t catch them together for a picture because he insists on chasing her, and she won’t stand her ground. Sometimes he’s a brat. I hope he outgrows it. 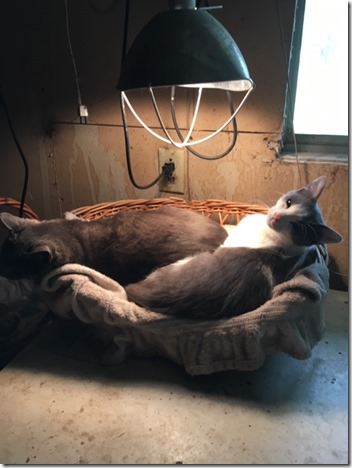 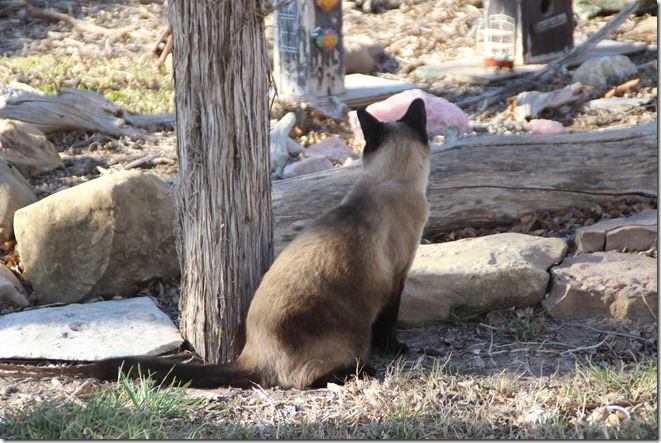 When he’s not being a pest to the other cats, he’s fun to have around, and I find him in all sorts of unusual poses and places. 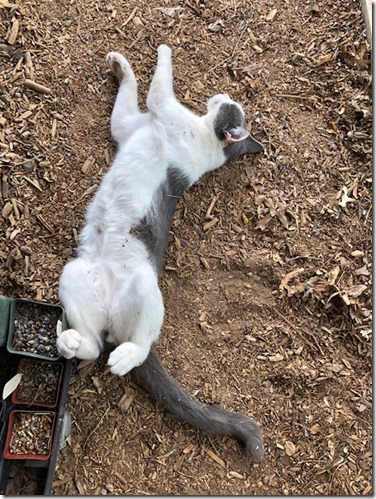 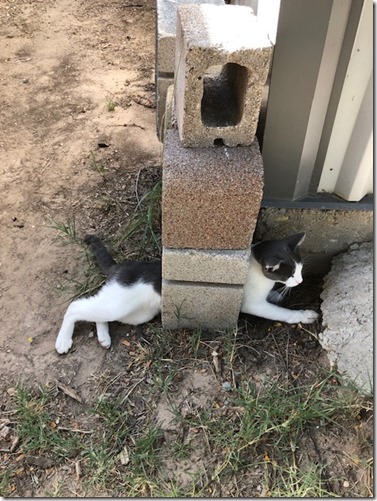 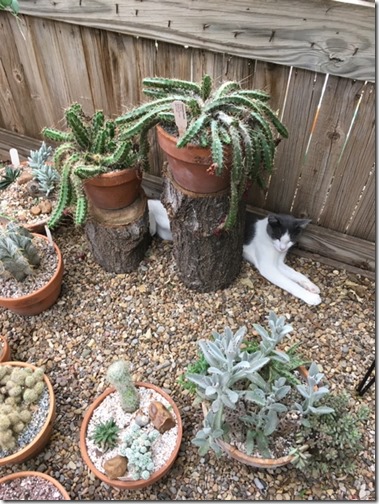 One day both dogs were playing loudly with each other, and I caught Frosty in the safety of the barn, watching all the outside activity. 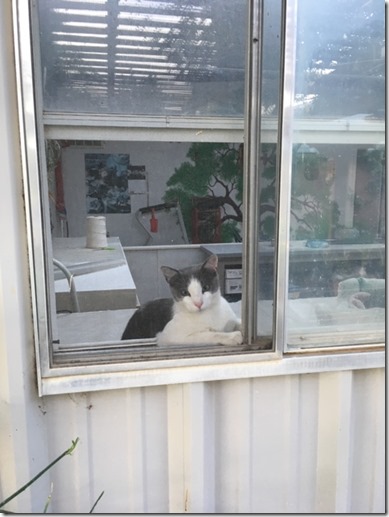 Based on the age Dr. Urbantke estimated Frosty to be when he showed up here, he would be about a year old this month (September). He’s not finished growing yet, but he keeps getting taller and his tail just gets longer and longer. Those legs get in the way, too, when he tries to get in my lap or lie on the table. He hasn’t grown to them yet, and is still a little clumsy in some positions and rolls off the table from time to time. 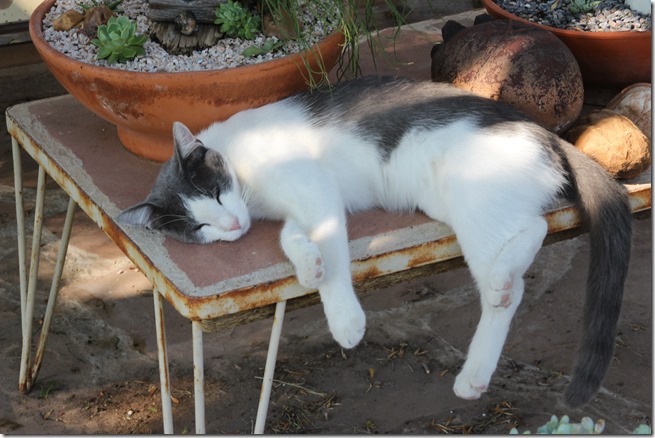 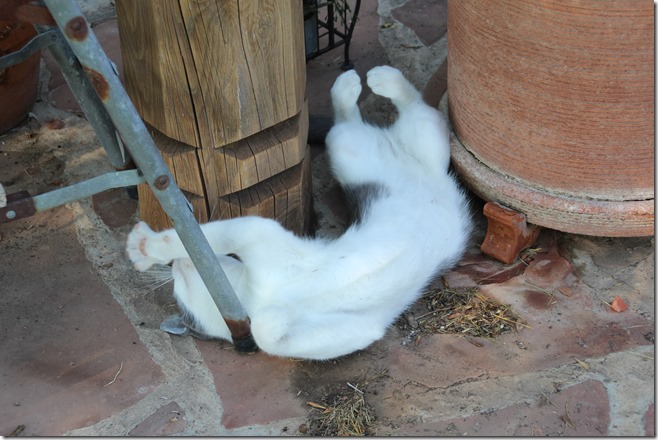 Like the other cats, he hangs around when I am working outside. He chases butterflies, grasshoppers, and hunts the birds, but mostly he walks all over whatever I am working on and does a lot of observing. 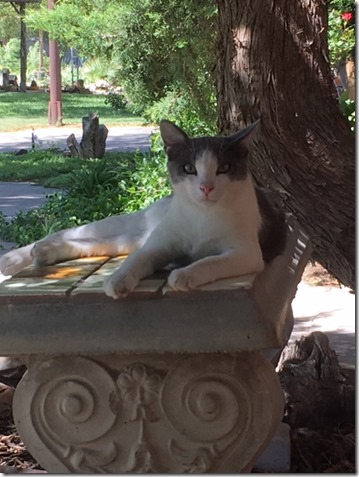 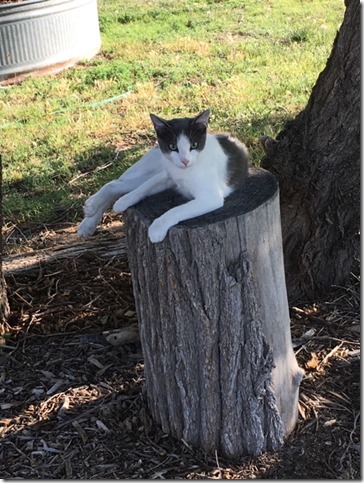 He’s not a baby anymore, and I don’t think he is through growing. No telling how long that tail and those legs are going to get. But it’s going to be interesting to see how he turns out. 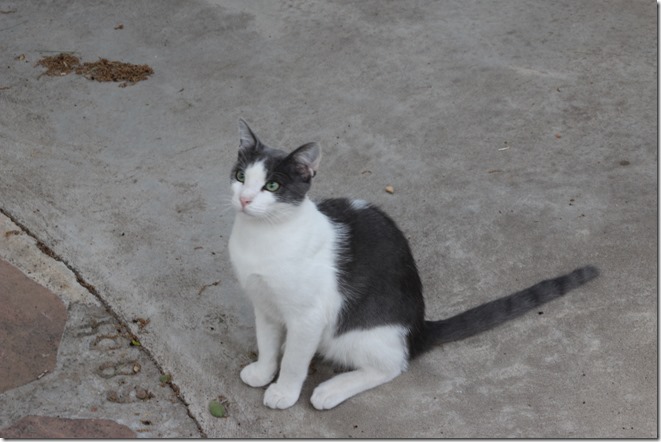 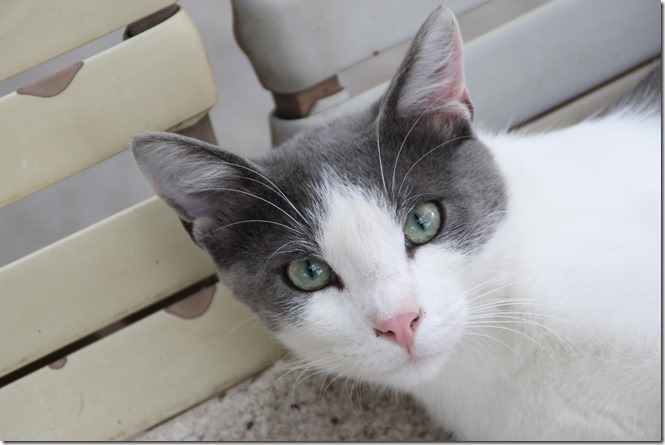 And he’ll always have that eyeliner going for him.