The Muleshoe chapter of the Texas Classroom Teachers Association (TCTA) served breakfast to new teachers and support personnel on Friday, August 9th at the administration building, and I was invited to speak to them about joining TCTA. 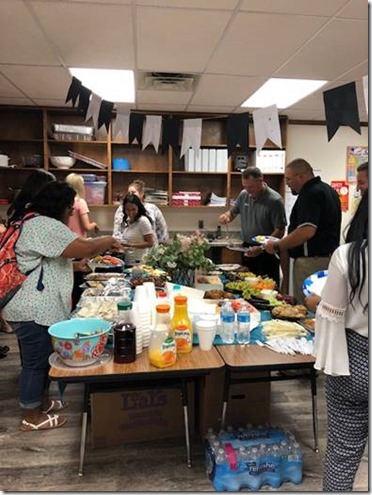 After everyone enjoyed breakfast, Superintendent R.L. Richards introduced Muleshoe CTA vice-president April Smith who then had the local members in attendance to introduce themselves and identify their campus so the new teachers would know who to contact if they had a membership question. Mrs. Smith then introduced me as a retired MISD teacher and past TCTA State President. I told them a little of my history with TCTA as a local member and serving as a district director for many years before being elected to the Legislative Chairperson position and later serving as state president. I visited with the group about the advantages of joining TCTA and becoming an active member in the organization. I answered questions from the group and then we passed out their TCTA goody bags filled with myriad welcoming gifts from many local merchants, a tradition I am pleased to say, we started when I was active in our local association and which members have chosen to continue because it is a positive way to introduce the new people to our community.

Superintendent Richards then asked the group to introduce themselves, tell where they were from, and their assignments with the district. Their introductions reminded me of the round of introductions when I was attending a workshop for teaching Advanced Placement English held in Honolulu. It was a very international group, and one man who was from the state of New York, rather grumpily introduced himself as being from Rochester, New York, and made the comment that if you aren’t from New York City everyone thinks you are just out in the boondocks with cows and chickens in your back yard. Well, when my turn came, I couldn’t help it. I said “My name is Alice Liles, I am from Muleshoe, Texas, and we do have cows and chickens in our back yards,” which broke the tension and everyone had a good laugh. I went on to tell them that these introductions are standard procedure at any teacher gathering and to have fun with it, and that having cows and chickens in your back yard is not a bad thing! Small towns and small schools have their advantages.

Assistant Superintendent Dani Heathington ended the breakfast by asking everyone to link hands while she prayed a blessing over the group and asked for a successful and safe school year.

The new employees remained seated for the continuation of their day of training, and the TCTA members in attendance then had their breakfast before tidying up and going on their way. 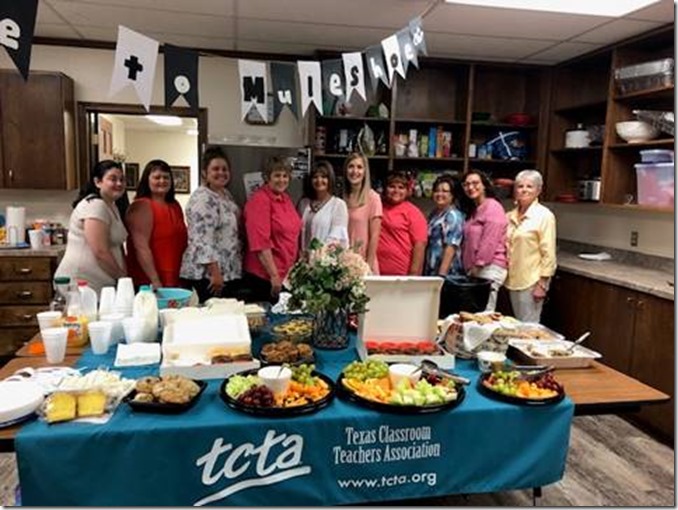 I had fun visiting with everyone and being involved with school-related activities, and I appreciated having the chance to tell the new hires about TCTA, which is the leading teacher organization in the state of Texas, 50,000 members strong. It’s a nonprofit, independent professional association with no labor union affiliations and represents teachers, librarians, counselors, educational assistants, and others directly involved in classroom teaching.

I enjoyed being a member of TCTA. It really is the best teacher association, and I hope many of the new teachers will become members as well.