Kay Graves and a Little Piece of Heaven 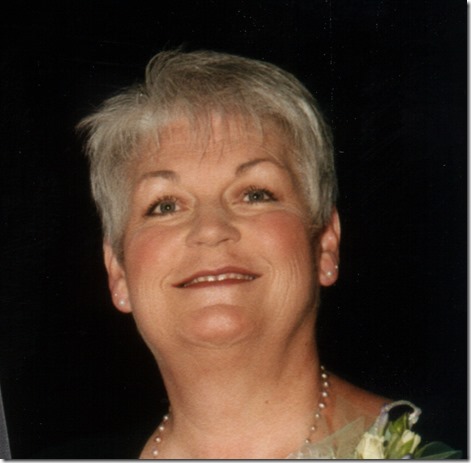 Donna Kay Stanton Graves was born June 1, 1947, in Pampa, Texas, and grew up in nearby Lefors   After graduation, she attended West Texas State University, now West Texas A&M University, where she helped her friend Phil Cates run and be elected to the Texas state Senate. He eventually turned to lobbying for the oil and cotton industries. but Kay was there working for him in his early political days. And the reason I am including this little tidbit is that her experience with Mr. Cates caused her to encourage Victor Leal to get into politics, running for Muleshoe mayor and other offices because Kay knew how to work the system and helped him. Her politics went through some changes, perhaps in part because of her involvement in Austin, or perhaps just because. At one time she was the Democratic party chair in Muleshoe, but died a Republican!

But I digress. Somewhere in there Kay wound up in Amarillo where she met John Graves and married him on June 24, 1973, in Lefors. John was offered a job with Southwest Public Service, now Xcel Energy, at the Moore County plant. The money was good, so the newly weds decided to forego finishing college and moved to Dumas and started their family with Courtney being born in 1974 and Adam coming along in 1979.  When the plant was shuttered in 1982, John was transferred to Muleshoe to the Tolk Station. As the kids both finished school in Muleshoe, Kay fell right in, becoming involved with things connected to the schools, church, and community. 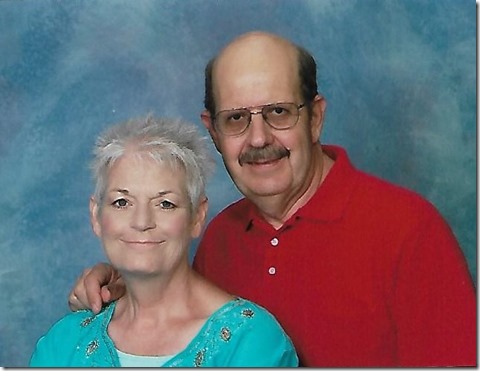 Since I knew  Kay was always busy with various projects, I asked daughter Courtney if her mom ever held a job outside the home, I could hear her take a deep breath before she said no, she probably would have just gotten fired if she had tried to work; then she added, cheerily, “We Graves women are a little opinionated.” 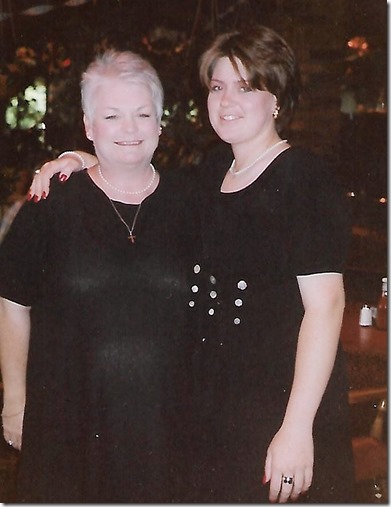 And that’s exactly why Muleshoe has a food pantry and benefitted from several other endeavors Kay had a hand in. Opinionated, perhaps, but also assertive, resourceful, and sensitive to the needs of others. Kay was always a worker bee, but suffered from bouts of depression until she decided that the way to deal with it was in service to others.

And serve she did. She was very active in the First United Methodist Church in Muleshoe where she taught Sunday school, was a youth group sponsor, came up with the idea of inspirational send-off books from church members for Methodist graduating seniors, was a staunch supporter of Spirit Wind choir,  was a member of United Methodist Women and the Wesley Service Guild, and a key member of the High Plains New Horizons, and Llano Estacado Emmaus Communities.

Kay was a very spiritual person, and she was quite involved in walks to Emmaus, a program designed to strengthen and renew the faith of Christians. She was selected by an Emmaus board of directors to be the lay director of a walk with international participants from Denmark, Sweden, and the Netherlands which was to be held in Texas. She was crucial in organizing the walk, which included working with the thirty-six pilgrims, thirty-six local workers, making agape gifts for the participants like little surprises, booklets, crosses and attending to the details of the walk to take place at Amherst.

Courtney was present for that walk, and remembers at one point they were all in a tiny chapel singing, mostly in English when the international visitors started singing in their native tongues, which touched Kay deeply, and she commented that this is what heaven should be, all people coming together.

Kay also served on committees or was a board member for many projects in town:  the high school’s M.O.S.T. project (Muleshoe Opportunity Scholarship Trust), Friends of the Library, Muleshoe Blood Advisory Board, Bailey County Ministerial Alliance Hope Chest, Muleshoe Rainbow Room, Compassionate Care, and the Bailey County Welfare Board. She served as a den master for Boy Scout Troop 620. She was a lifetime member of the PTA as well as volunteering and mentoring students in the Muleshoe school system.

Kay’s reward in doing all of this was knowing she had helped someone in their time of need, but her efforts always wound up earning her recognition in more public ways. She was named Muleshoe High School Parent of the Year 1992, Beta Sigma Phi Woman of the Year  1994, Muleshoe Chamber of Commerce Woman of the Year 1999, Food Bank Region One Volunteer of the Year Community Partner, and Student Community Action Club (SCAC) Citizen of the Month for November 2000.

Kay was a nature lover and environmentalist at heart. I remember having her come talk to one of my leadership classes, but alas, I don’t remember exactly what topic she discussed. The one thing I do remember her telling the class was about unhooking the pipe under her bathroom sink and putting a five-gallon bucket under it to catch all the water that runs through the pipes when we are waiting for the hot water to appear and then using that water to water flower beds and plants. The bucket also caught water that was being used, but it was still acceptable to water with. To her that was better than all that extra water just running down the drain for no reason. I’ll have to admit I did not follow her example, but I really do think about her suggestion when I run water waiting for the hot water. And feel a tad guilty…

Another example of her pleasure in nature was that she wanted a fish pond, so one time when Adam did something stupid-Courtney’s words, not mine!-his punishment was to dig a hole for the pond in the back yard. Kay landscaped and decorated the pond, added goldfish, and was very happy with it. Then when an egret came to visit the pond, that was the finishing touch. But then when she realized he was stopping by to dine on the goldfish, well, he wasn’t encouraged to come back.

Crane Fest was another bird-centric activity Kay worked on at one time. I’m not sure whose idea it was, but Kay and Kay Mardis worked with Richard Hawkins and Cliff Black whose sons were in Boy Scouts at the time, the Wildlife Refuge staff, and no doubt a host of other people in town, to put on a breakfast and crane-watching event at the Muleshoe Wildlife Refuge. Breakfast was served and then everyone would go down the roadside park on the hill, site of the get-together, to watch the cranes. The Wildlife Refuge provided information about the cranes. Some years I think a light supper was served and people would then go down to watch the cranes come in for the night. This event lasted a few years before people sort of lost interest and quit coming. But Kay never tired of watching the cranes.

Kay’s spirituality and faith in God came out in many ways. LeAnn Gallman told me about the Prayer Wall she led for several years. Anyone who wanted to participate was welcome to gather once a week at an imaginary wall around the city to pray for city leaders and to ward off bad influences, encourage pure minds, and keep evil forces away. The locations of the imaginary wall would change from time to time, but usually focused on where the roads and highways led into the city. Just one more example of her visionary outlook on life. Always focusing on the positive, Courtney said whenever she might say something negative, Kay would have her follow up by saying five positive things.

Courtney said her mom would have loved Facebook,  emojis, symbols, and texting shortcuts taken for granted in these days of smart phones. In fact, she came up with her own version of the Christian symbol of the fish: <>< .  She also had her own version of the smiley face emojis so popular today, and when I tried to type her version- an 8, a colon, and the back half of a parenthesis, and I’ve tried several times-this pops up instead

! So she was definitely on the right track. She probably would have taken some heat for opinions she might have posted on Facebook, but she also probably wouldn’t have cared, because it was important to her to do or say what, in her Christian mind, was the right thing.

Mama Kay, because that just fit her, and because it kept her from being confused with Kay Mardis aka Banker Kay, got into the habit of sending weekly email devotionals to friends and family that most likely would have become an inspirational blog site today. Friends looked forward to reading Monday’s Motto, Wednesday’s Wisdom, and Friday’s Funny. She was diagnosed with cancer in 2004, given about six months to live, and told the family she didn’t want any heroic life-saving treatments, that if God needed her, that was that. That is, until Courtney’s first child, Madeline Kay, was born. She went on to spend three more years writing the emails and enjoying that baby girl. 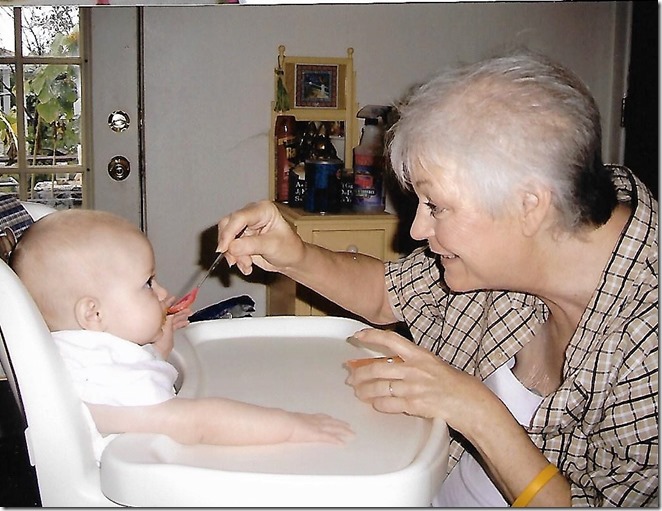 As her cancer progressed, these emails were still her way of being there for her friends, but also became a source of comfort and peace as she prepared herself and her friends for her departure. Funeral arrangements were made, pall bearers were notified, and the gravesite was visited. All of this and more were discussed in her emails. LeAnn Gallman was one of the chosen pall bearers, and she remembers fondly when Kay told her about choosing the casket and laughing with her about adding a few feathers and twinkle lights to accent her ensemble in the casket.

Kay died on May 3, 2007, and was buried on May 5, 2007, in the Bailey County Cemetery. She touched the lives of many people in Muleshoe, and her legacy lives on and will continue to do so.

It’s been a little piece of heaven having you here,  Mama Kay <>< .