Tracy Vymola and her Love of Adeniums

I promised to give a rundown on the instructive sessions from the Mid-States Cactus and Succulent Conference after we looked at the ones that shared their travels to exotic lands. I enjoyed those sessions, but thought I could also share  some of the things I learned from the programs that gave more specific information to help you grow your own cactus and succulents.Tracy Vymola from Waterloo, Illinois gave two sessions on adeniums. 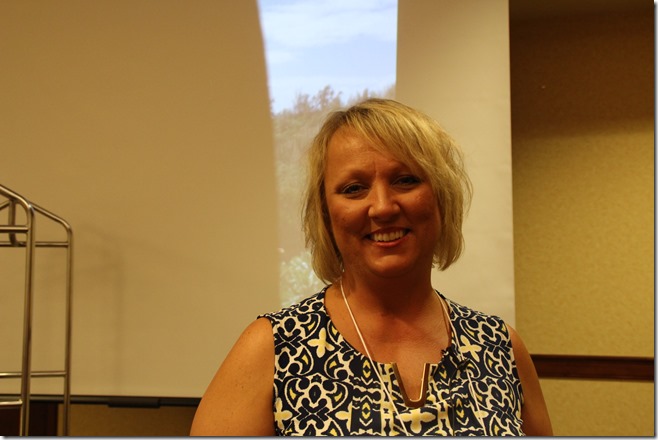 Tracy has a passion for adeniums, so much so that she turned her bedroom into a growing nursery for seedlings. 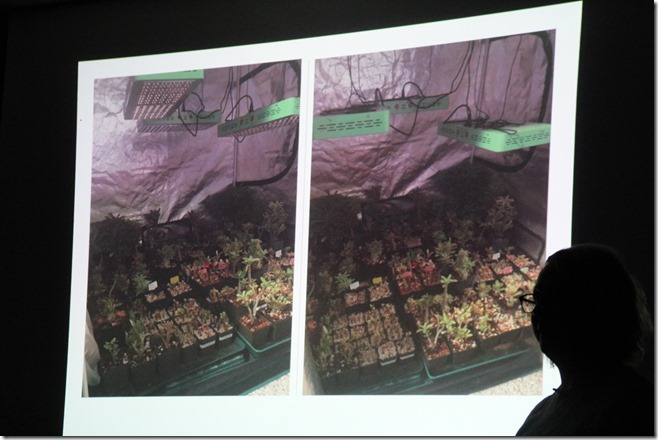 Tracy shared with the audience these facts about adeniums. Adeniums, which you may know by the common name of desert rose, are native to East and Northeast Africa, and in the Arabian Peninsula of Yemen, Saudi Arabia, and Oman. This plant has become extremely popular in Thailand, where they have developed some innovative and unusual styles for making the roots and caudex of the plant as eye-catching as its flowers. In the wild and over time as a potted plant, adeniums grow into a succulent shrub or tree. They are in the same family as oleanders. It needs full sun, has a high tolerance for drought, and in the U.S. usually blooms between February and November. Flowers are traditionally reds and pinks, but hybrids now come in all kinds of colors. 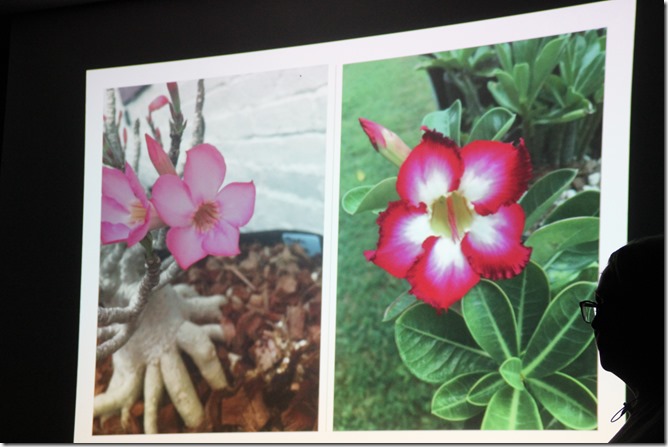 Thailand is blessed with perfect growing conditions for this succulent plant and they have embraced it, spending untold hours training their roots. Adenium arabicum is a popular variety of the plant and one that Tracy is growing in her bedroom nursery. 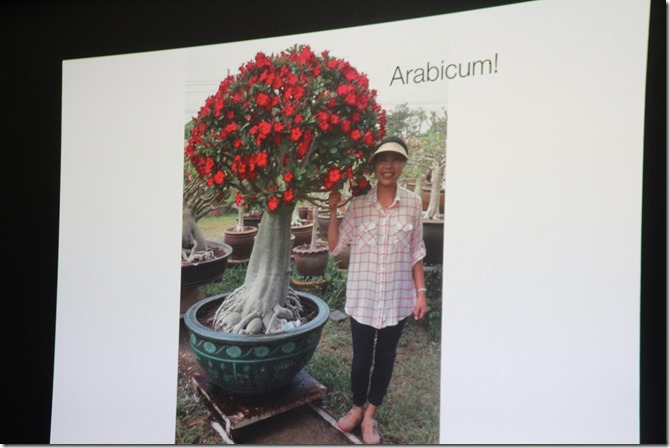 Tracy reminded us that the plants go dormant when it gets cooler and that they are not cold-hardy, so bring them in for the winter. Well, unless you live in southern California, I guess. If it gets colder than 35F, they will be damaged and die, so bring them in. And a severe temperature change will result in them losing their leaves. But if they do drop, don’t give up. When it warms up, the leaves will come back.

Tracy shared with us examples of how the Thai people train the roots of the plants so they sometimes look like this, for the waterfall or cascade effect, 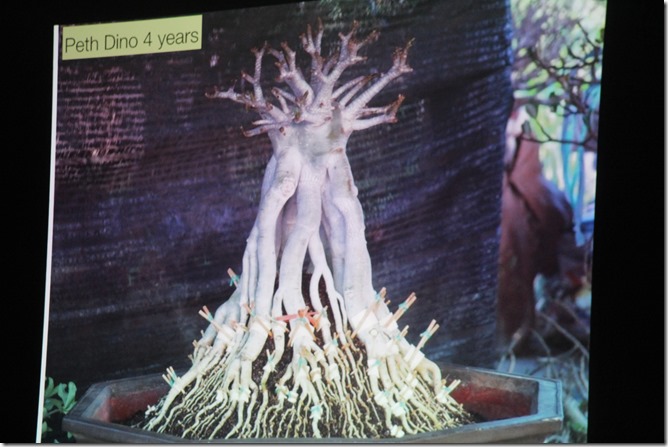 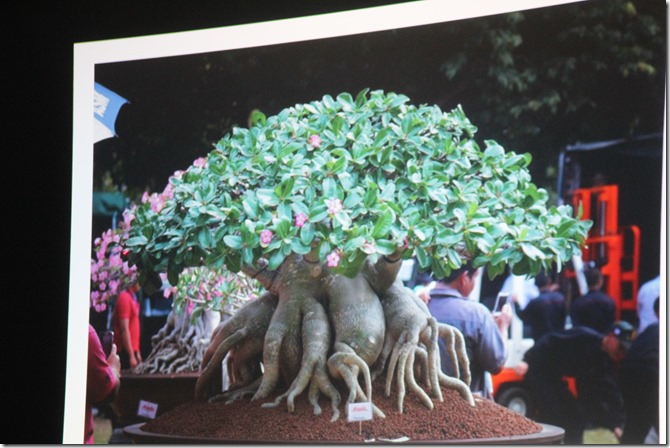 The next day Tracy’s program was demonstrating how to go about getting your adenium’s roots to have that cascade effect. She asked for six volunteers, so naturally I jumped at the chance! She brought six two-year old seedlings she had grown herself for us to work on and learn the Thai techniques. Along with the plant, she supplied everyone rubber gloves, a sharp cutting tool, several bamboo skewers, a pretty metal chop stick, and a nice pot to take our finished adenium home in. 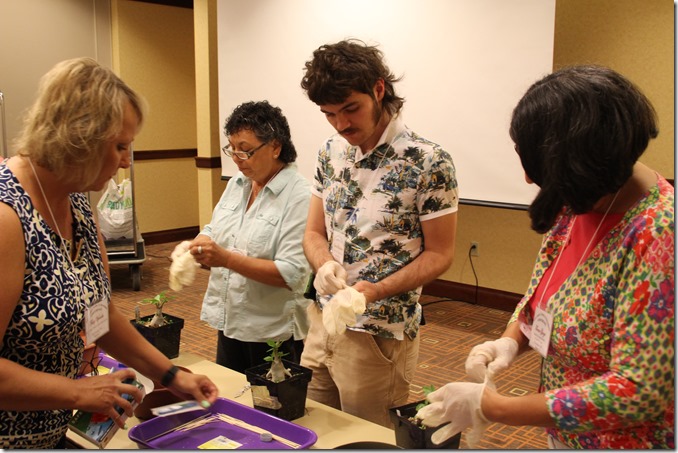 This is what the little plants looked like before we removed all the dirt from the roots using the pretty chop stick she gave us. 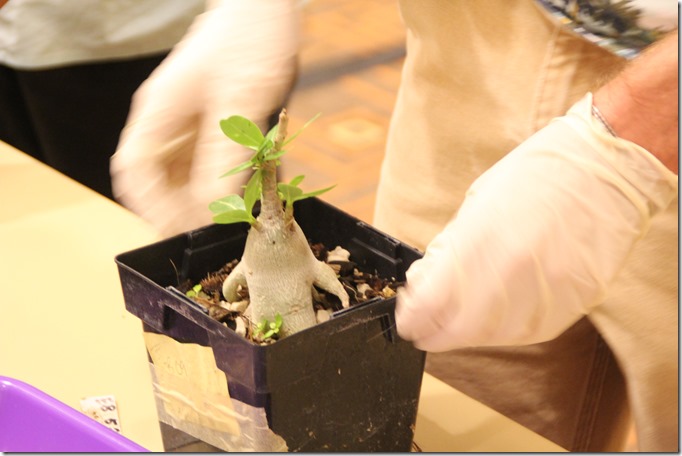 After all the dirt was removed, we were ready for the next step. 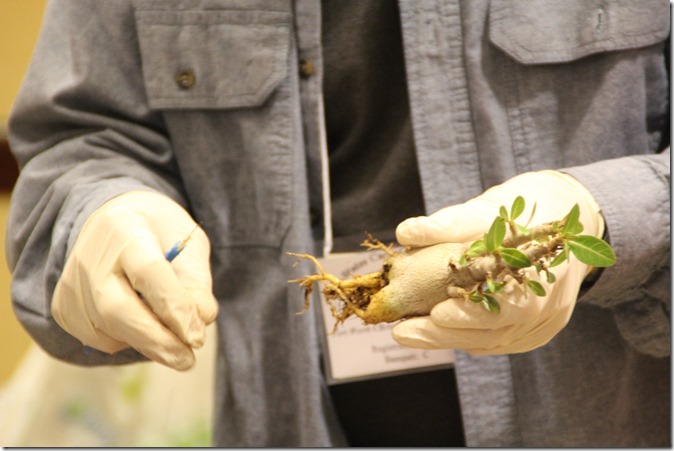 We trimmed the inside and smaller roots, leaving the main ones to form an outside circle that would eventually form the cascade effect. We built a little pyramid of soil under the middle of the plant and then propped it in position over the pile of dirt with the bamboo skewers. 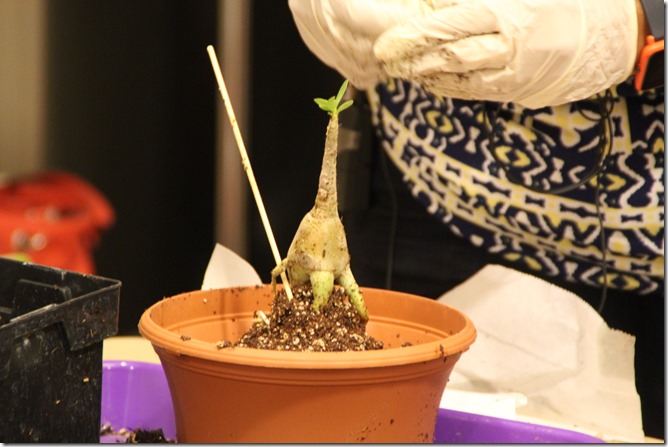 The skewers hold the plant in place while the roots continue to grow and plump up. Tracy said every four months we should go through the same procedure, trimming and replanting until it takes the form and shape we want it to have. We were told not to water it for two weeks, and then sparingly after that. 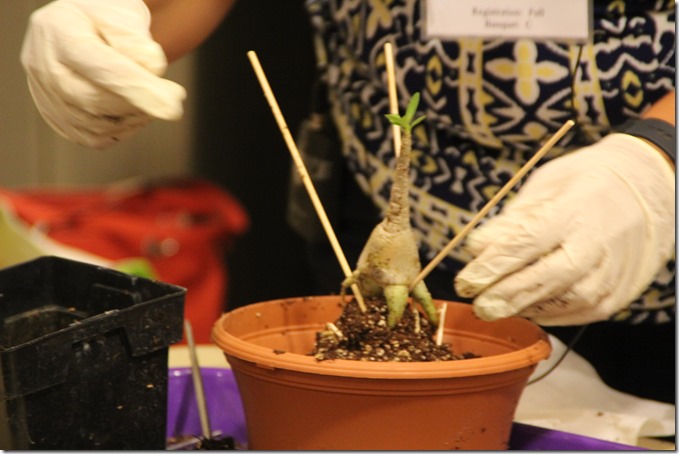 After a lot of fun and intense concentration on pruning and stabilizing the plants, they were ours to take home. 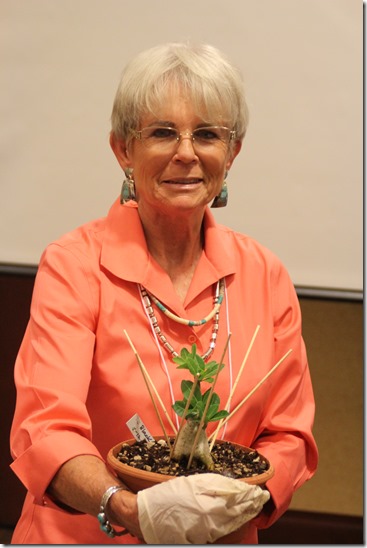 This all took place on June 23rd. This is how it looks on November 5th, a few days past the official four months when I need to redo the whole process. It hasn’t grown a whole lot, but the roots do look fatter. 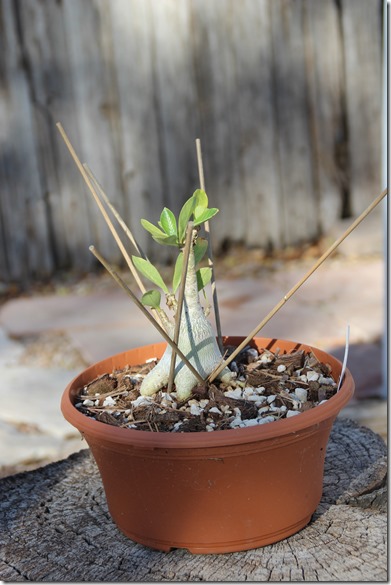 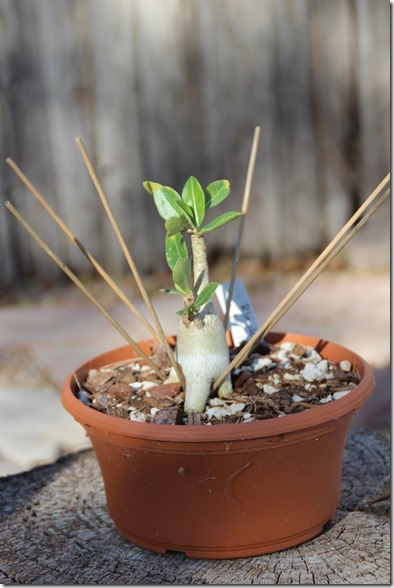 So repot it I will. I doubt it will be as impressive as those in Thailand, but it will have its own personality. I look forward to watching it grow and eventually bloom.

Thanks to Tracy for her generosity in sharing her adeniums and know-how with us.