The Little Press Box That Could

In 1996 when Benny Douglass Stadium had metal seating installed in the stands,  the original old press box was torn down and a new two-story one went up. For the next fourteen years that simple press box served the stadium and the football program well, but many games later, it was decided the whole stadium would undergo a face-lift, which included a new, more spacious press box. The old press box was destined to become scrap metal and gone forever.

But fate, in the form of the Anzalduas, Noe, but especially Freddy, intervened and rescued the press box and gave it a new home right across the street at the north end zone of the football field. 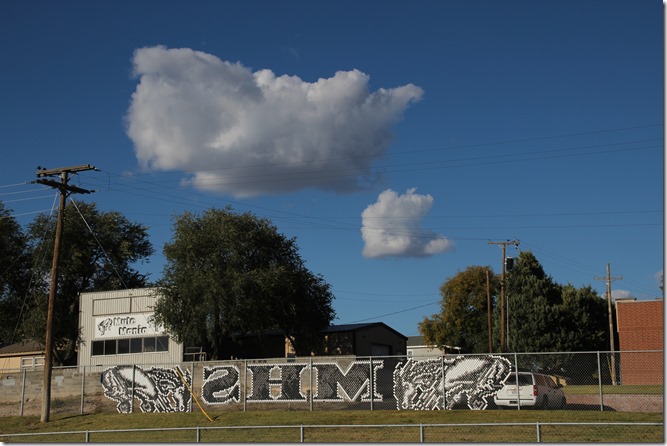 Noe Anzaldua worked for KMUL developing their Spanish music programs and selling ads. His experience as a DJ led him to be the master of ceremonies for the Catholic Church’s Jamaica for many years. Noe also had the El Jacalito Café and tortilla factory and ran Viola’s Mexican Food Restaurant with his wife Viola for many years. He and Viola also raised four kids along the way, Freddy, Roy, Noemi, and Noelia. And along with all that he was a bail bondsman, had an income tax service, handled immigration paperwork, and sold cars.

His oldest child, Freddy, worked the tortilla factory, income tax service and bail bonds with his dad, and later with his wife Mariann kept Viola’s open. Along with that, Freddy had Advanced Towing Service, which played a part in the relocation of the press box. 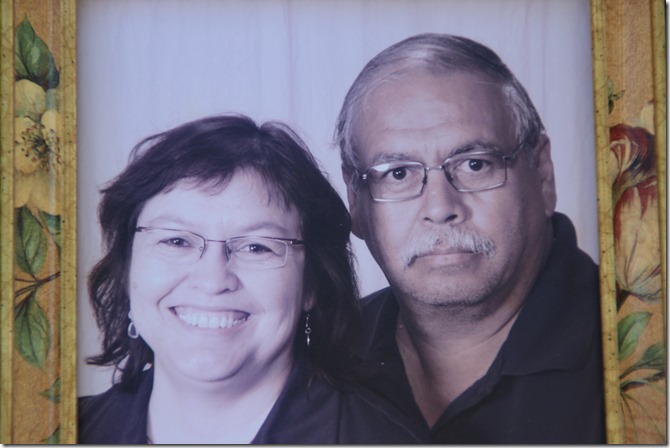 Noe and Freddy both enjoyed football, so when they learned the fate of the old press box, Freddy decided, and Noe concurred, that it would make a nice addition to his and Mariann;s house on 6th Street, conveniently located across from the football field end zone, and give the family a front row seat, of sorts, to watch the games.

When it came time for the press box to come down, Freddy convinced Beto Mendoza, whose bid on the demolition of the stadium had been approved, to sell the press box to him for $500. Which was all well and good, but left Freddy with the task of getting it down off the stands and moving it to its new home. And that turned into quite a story.

Friend Lupe Olivares brought in two wenches from his irrigation service, hooked onto the now unattached press box and lifted it down off the stands. But there it sat for about a week because they were not allowed to just drag it to the new location for fear of tearing up the paving in the parking lot. It was at this point that another family friend and mastermind behind the move, Jesus Agundis, came up with the idea to use three six-inch well casings as rollers underneath and roll it through the parking lot and down the street to the edge of its new location. Jesus lifted the press box with Freddy’s repo truck, which is equipped with arms sort of like a fork lift, and set it on the casings. As they pulled the press box with the repo truck, he and Mike Lopez would take the last well casing that had rolled out from under the press box, go to the front of the press box and insert it there, pull the building forward till another casing was left behind, and repeat the process. This took about two hours until they finally had it in position at the side of the Anzaldua’s  back yard.

Where it sat again for a few days until they came up with a plan to get it off the street and up where it should be in the back yard. In the meantime, Jesus built the piers and poured the concrete for the press box to sit on. They used an extended fork lift which was able to raise it up higher than the new foundation and then move it forward and position it on that foundation. Things became a bit dicey at this point, because the tall press box was top heavy and teetered  back and forth till the fork lift got it in position. After that Shannon Gregory welded into the night securing the press box to its new base. Later, someone whose name has been lost to time, repainted the mule logo on the side, broken windows were replaced, and the press box was now safe and happy in its new home, spared the ugly destruction it would have otherwise met. 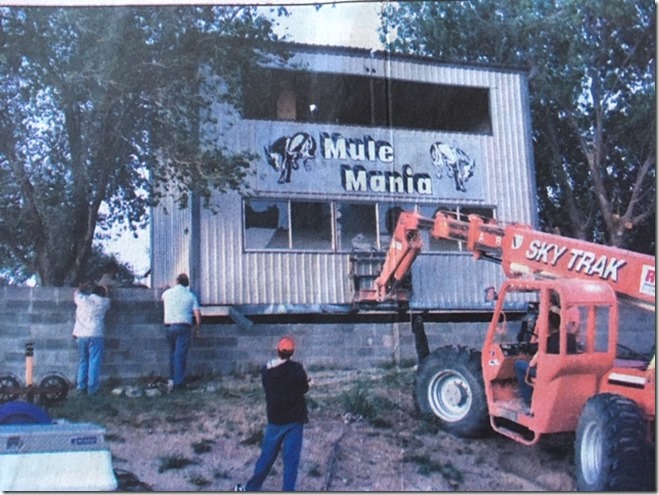 The press box was an instant success. All the Anzalduas enjoyed watching games from this new vantage point as did friends who came by to gather and enjoy the game with them in a tailgating sort of way. This picture was taken on September 6, 2010, the press box’s maiden year at its new home. I suppose one might find fault with fans watching the game without buying tickets, but they are still supporting the Mules, and that’s what’s important. Plus, only a truly dedicated fan would go to the trouble to move a press box in order to have those prime seats! And how cool is that, to have a piece of Muleshoe history right in your own back yard? 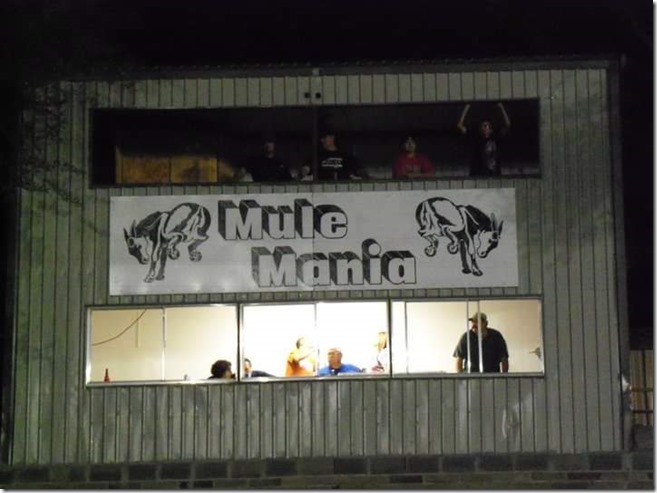 Time passed and many games were watched from the rescued press box. Noe died in 2005; Freddy passed on in 2017. Jesus, who had worked for Freddy in his Advanced Towing business and was a close friend from way back to both Freddy and Mariann, had continued his friendship with Mariann after Freddy’s death, and the friendship bloomed into romance. They are now engaged to be married and still climb into the press box to participate in Mule Mania.

When I finally decided the time had come to tell this history story, I needed to talk to the caretakers of the press box. I rang Mariann’s door bell and came face to face with Jesus, a former student of mine and classmate of Caroline’s, which was a nice surprise. Mariann was at work at the Bailey County Sheriff’s Office where she takes care of the medical needs of the inmates, so Jesus, who now works for county commissioner of precinct two, Mike Slayton,  went on to tell me a short version of the story and invited me to come watch a game with them sometime. Well, I think I might have invited myself, but I was welcome to come share an evening with them and see for myself how everything looks from that elevated vantage point.

Which brings us to the game Friday, October 26th, when the Mules hosted the River Road Wildcats at Benny Douglass Stadium. I came for the kickoff and stayed till the Mules won 28-21. The press box was quietly empty without the writers, coaches, announcers, statisticians, cameramen, and others who would climb up and down the very simple ladder to go from top to bottom. This ladder was functional and didn’t take up valuable space, but has never been the easiest way to get from one floor to another. 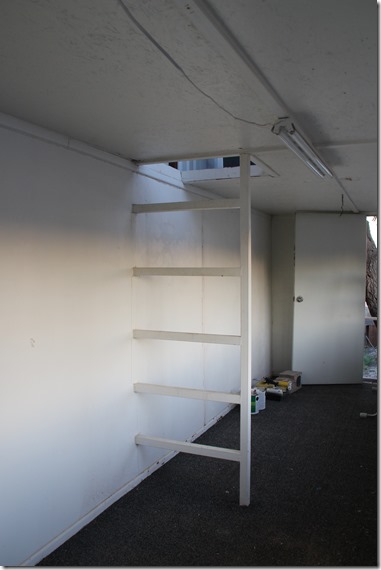 So Jesus took the ladder from the above-ground pool in the back yard and worked it into the rungs of the original ladder for easier access. The bottom floor has sliding glass windows that were no doubt open during hot nights and closed during windy cold nights. 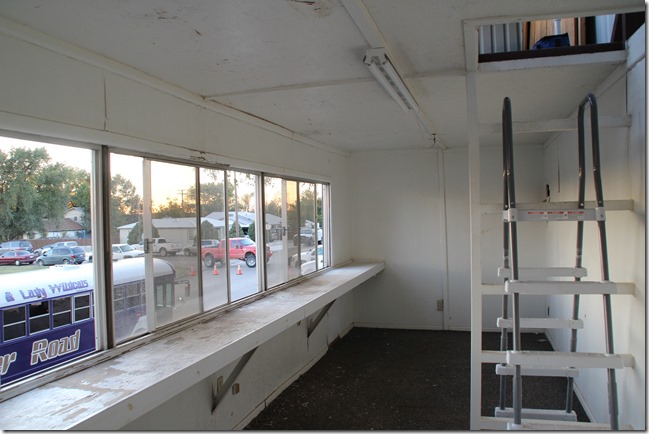 The top floor has no counters or windows, but open space with no barriers to interfere with filming the game. Then after the game panels hanging below the spaces are folded up  and locked into place to close it up. 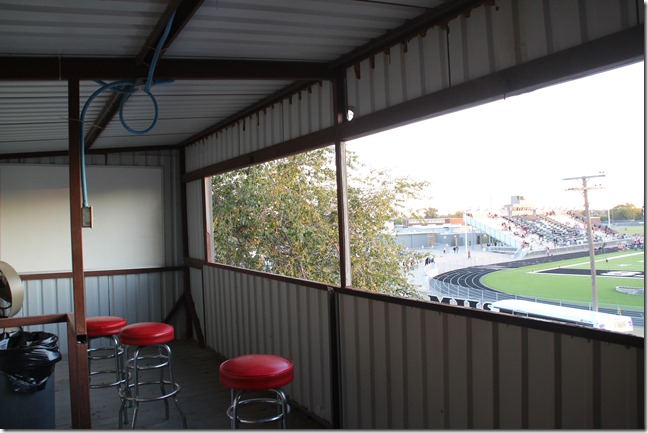 You can see everything from up here. 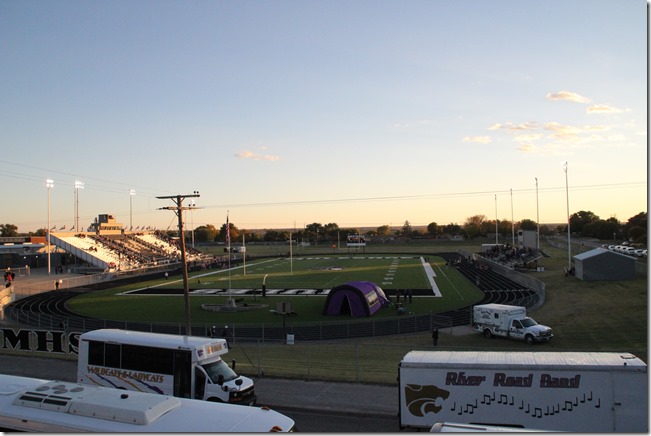 October is Breast Cancer Awareness Month, so pink was evident on the field in places where you wouldn’t normally expect to see pink. 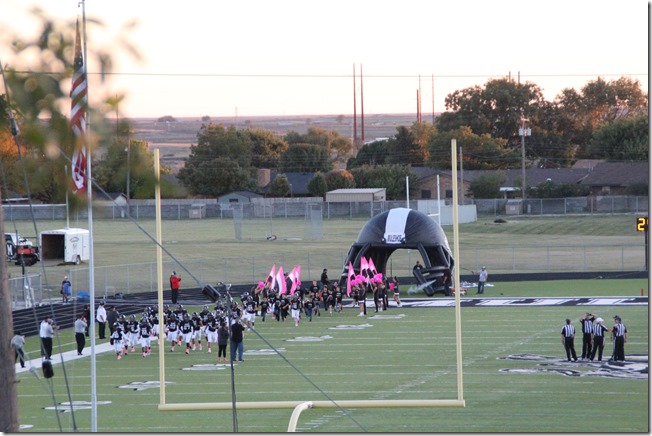 These young men stood for the national anthem. 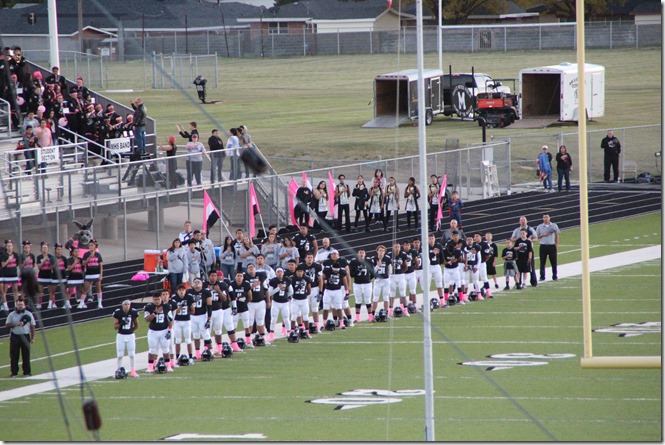 It’s fun watching the game from here, even if it is from the end zone. 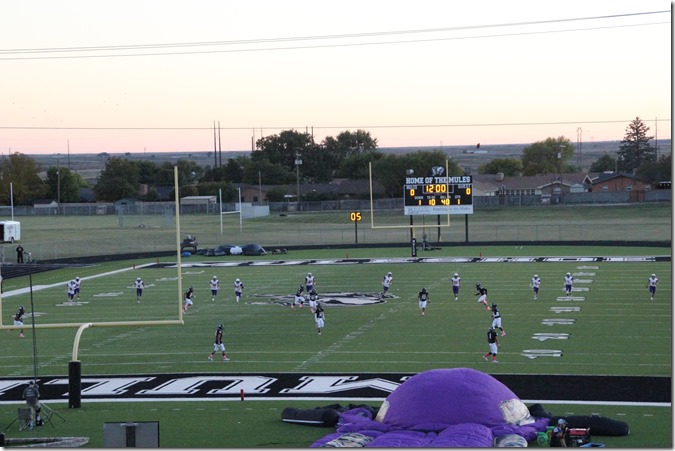 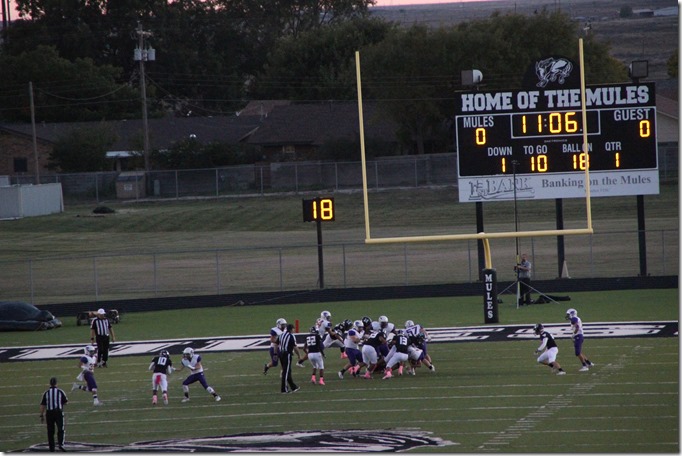 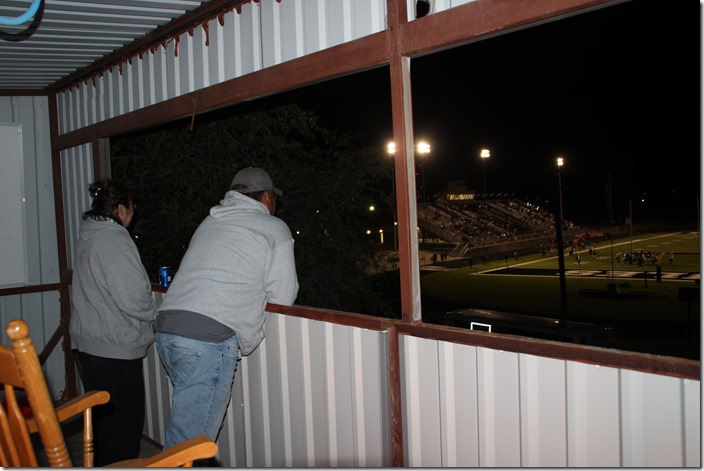 I have no idea what those blue things are in the sky, but this is a nice example of what our view looked like from the top floor of the press box. 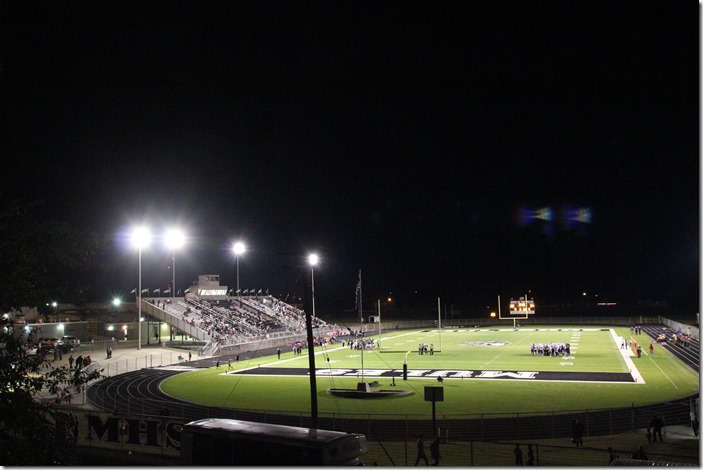 Between watching the game, taking pictures of the game, visiting, and trying to write down what all Jesus told me about moving the press box, I tried to also keep up the progress of the game. This may not be a perfect recall of everything, but it’s reasonably close. River Road scored first, but the Mules answered with their own score. In the second quarter the Mules had a touchdown called back, but answered with another one which was good, making the score 14-7, Mules. River Road scored again and so did we, and the third quarter score was 21-14, Mules. River Road tied it up in the fourth quarter, but Del Toro and Martinez answer yet again with another touchdown and we were ahead 28-21. We recovered a fumble and missed a field goal, but were able to hold River Road to no more scoring and won the game 28-21. The team and fans were thrilled with the win! And they had much to be proud of. The Mules played hard and fought back and held the Wildcats and claimed the victory. Good job, Mules! 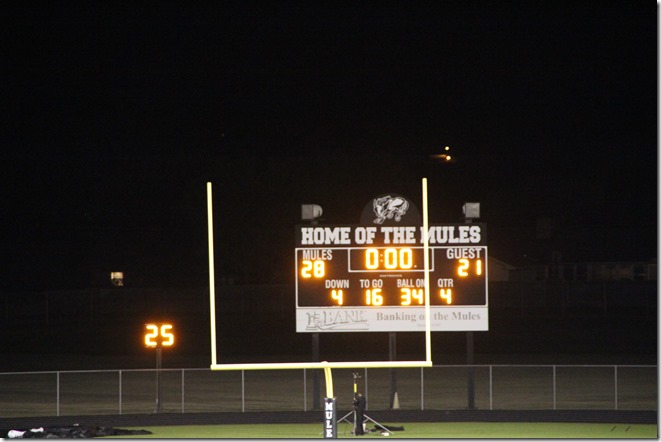 Those of us watching from the historic old press box were excited about the win as well. 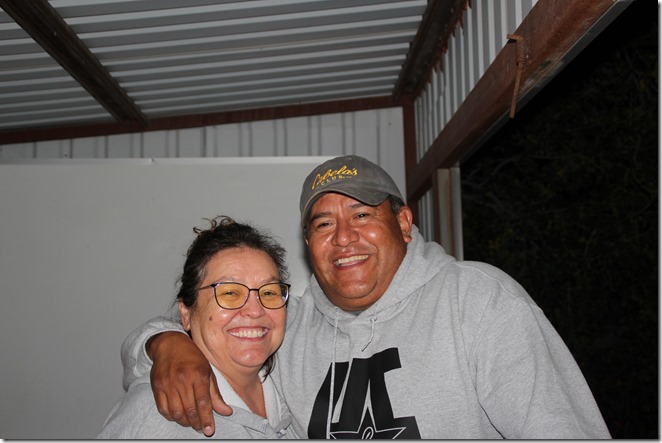 Saving the press box was an inspired move, a piece of Muleshoe history preserved for all to see and appreciate, whether  watching the game from this lofty perch or just looking at it from the new stands that almost created its demise. 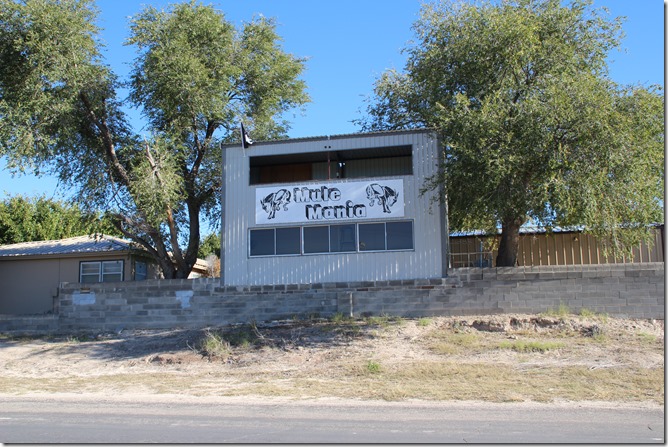 I, for one, am glad it is there; a classic saved for posterity. It is happy in its new role and still doing its job watching over the Mules.

My thanks to Mariann Anzaldua, Jesus Agundis, Sam Whalin, Roy Anzaldua, Bob Graves, April Gonzales-Cisneros, and Gabby Perez  for helping me with this story.