The Misadventures of Alice and Jenice in Santa Fe

When friend Jenice Williamson revealed she had never been to Santa Fe, New Mexico, well, nothing would do but that we fix that gap in her list of adventures. And we did. Have adventures, that is.

I picked her up at the Lubbock airport on a Saturday and we headed out for Santa Fe the next morning.

The adventure started when Jenice turned on the car’s GPS. We had not entered a destination, but the GPS girl-I don’t think she has a name like Siri does-she kept giving us all kinds of directions, and we kept thinking, How does she know where we’re going? When we pulled into Vaughn-we chose the lower route to avoid I-40-and we knew without a doubt we going in circles and realized she was in fact sending us back to Muleshoe! We finally decided one of us had inadvertently pushed the last destination button, which was Home.

Or not. We never really solved that mystery and after entering the hotel’s address, she did eventually take us right to the hotel, which I was not familiar with, so all was forgiven.

But once we disobeyed her directions and got passed Vaughn and Encino, we made the predictable tourist pit stop at Clines Corner before pulling right up to the Inn of the Governors and on to more adventures. 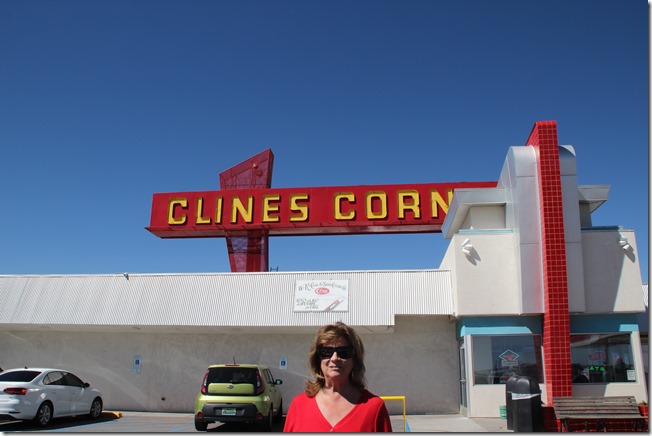 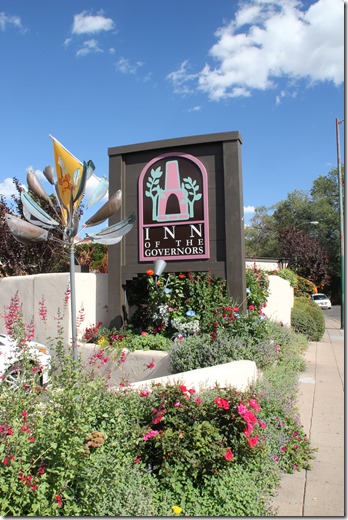 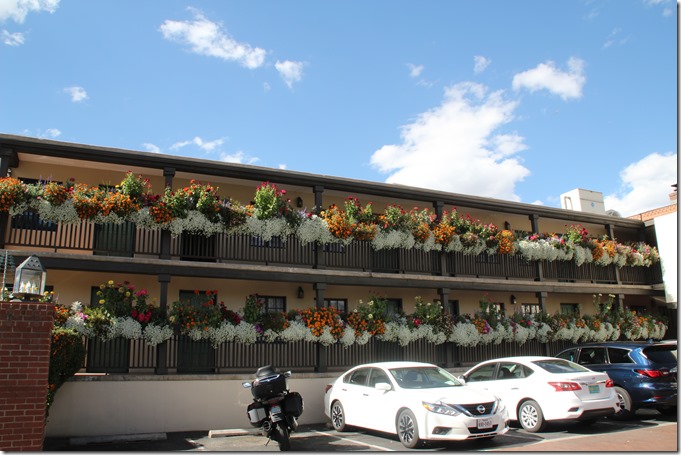 After checking in, we hit the plaza, an easy block or so away, put our name on the waiting list at Pasqual’s, and shopped to help our 45 minute wait time pass. 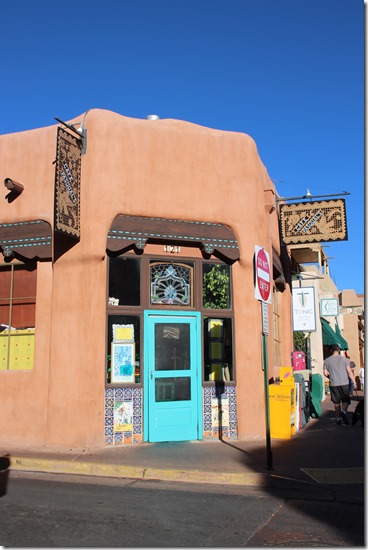 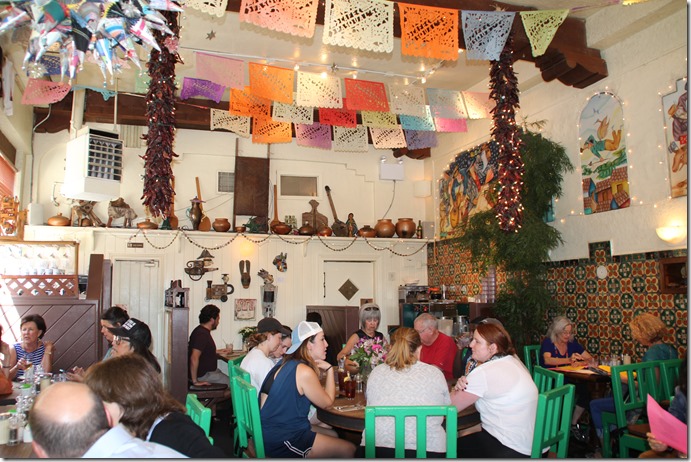 We checked out the Indians at the Palace of the Governors and bought what the seller called wrist bracelets, hit some other shops and art galleries before realizing I had not done any better of a job picking our walking route than the GPS had done trying to send us back to Muleshoe. All that extra walking was a little bit of a misadventure because our feet hurt! Apparently our choice of footwear for unnecessary steps was not the best. 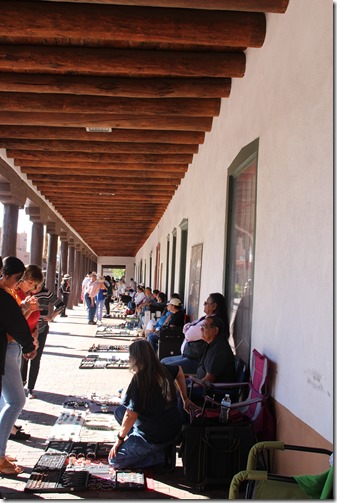 So we finally found our way back to the hotel, changed shoes, and discovered Jenice had lost the new bracelet! We then drove down Cerrillos Road, looked around, and wound up back at the hotel’s bar to enjoy a glass of wine and a pile of nachos and called it a night.

The next day we toured the Loretto Chapel and admired the spiral staircase for which it is famous. It is the first Gothic structure to be built west of the Mississippi, begun in 1873 and completed in 1878. The staircase defies engineering logic because it is two complete spirals without center or side supports. And there is a legend that goes with how it came to be built. I will save that so you will have something to learn about when you visit Santa Fe and the chapel some day. Or Google it. 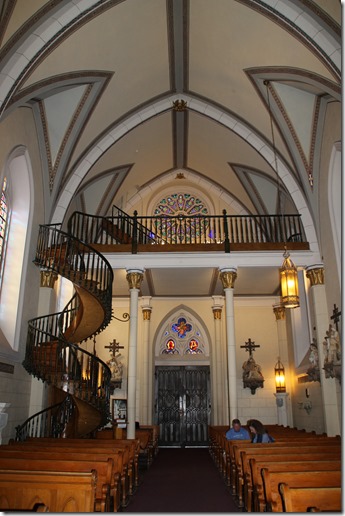 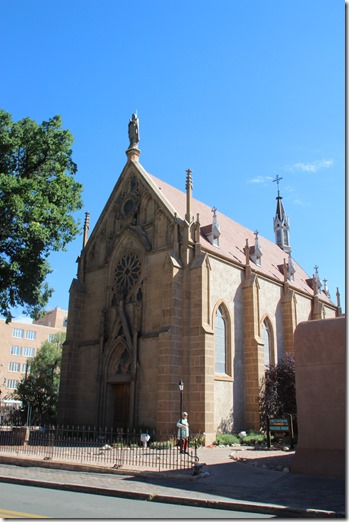 Myriad stores and many extra steps later due to more of my misguided turns on the plaza, we wandered into a mall on the plaza where Jenice bought an inexpensive but nice pair of earrings. We also drooled over expensive rings made of diamonds and gold quartz, which I had not seen before in Santa Fe. 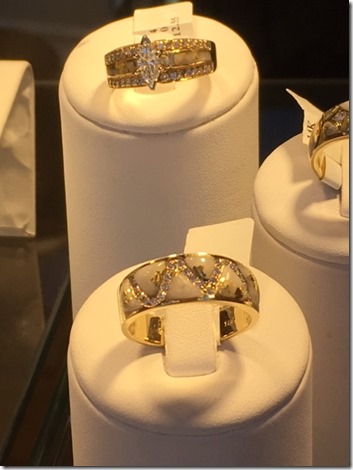 We stopped for a rest and a pastry at the French pastry shop connected to the lobby of the La Fonda hotel before going back to the room to again change shoes. Jenice was going to wear her new earrings, but one broke before she could even get it in her ear! Another mishap with jewelry. The earrings were not expensive, but it was the principle of the thing, so we back-tracked more steps to that shop and she replaced them with another pair. We decided after losing the bracelet and replacing the earring, we weren’t buying any more jewelry.

We followed up with stops at a bead shop, the Georgia O’Keeffe museum, more art galleries, and  a trip down Cerrillos Road to Jackalope and Camino Real to end the shopping for the day and then headed to Canyon Road and dinner at Geronimo. 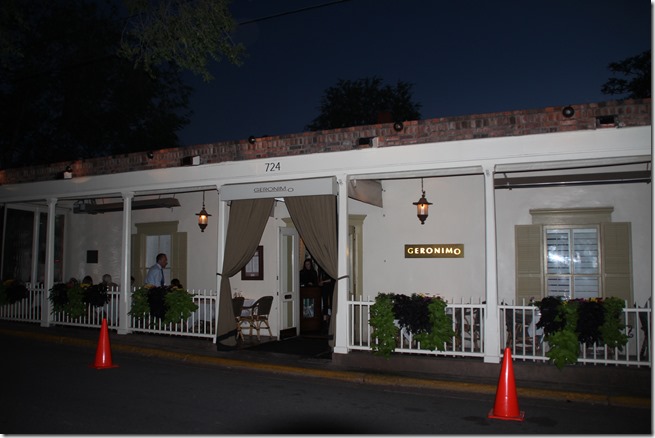 They started us off with a wonderful mushroom sherry bisque, and if it wouldn’t have been considered bad manners in this swanky place, I would have ordered another bowl! For the main course Jenice had lobster and I had the fiery prawns. When the plate was set before me, I wasn’t at all sure how to tackle eating it and asked our waiter, who, ironically,  was from Fredericksburg, just how I should eat this tower of food.  He laughed and said total destruction was about the only way to go about it. So I dug in. It, too, was wonderful. 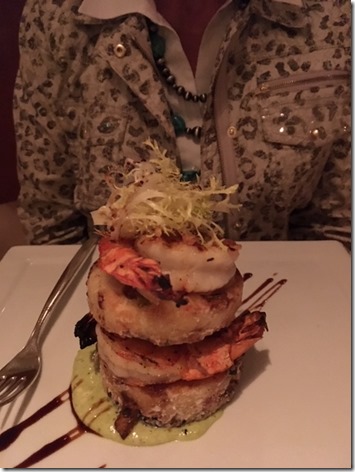 After desserts we really didn’t have room for, we waddled out, had the valet take our picture, and ended the day full and satisfied. 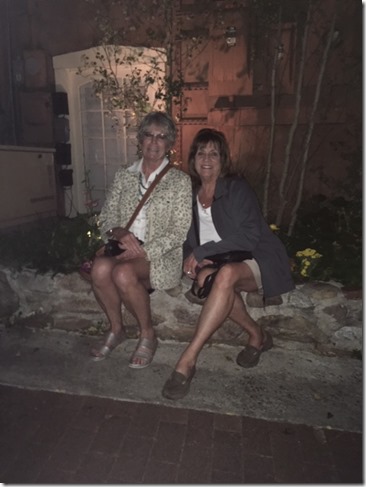 Last day. Checked out of the hotel and made one last run around the plaza before setting out to find a sun face at Camino Real on Cerrillos Road. After much deliberation I finally settled on one with a different face and color design from what I already have, and Jorge loaded it in the trunk and I happily shut the lid.  When the car made a beeping sound, I immediately knew I had laid the keys down in the trunk, creating a misadventure big time! While I was having a cow in panic over my major screw-up, Jenice calmly got on her phone and used her road assistance app to call for help. While we waited a short 30 minutes for the help to arrive, I wandered around long enough to find a metal-art giraffe I really wanted but knew I couldn’t fit in the back seat or the trunk of the car. 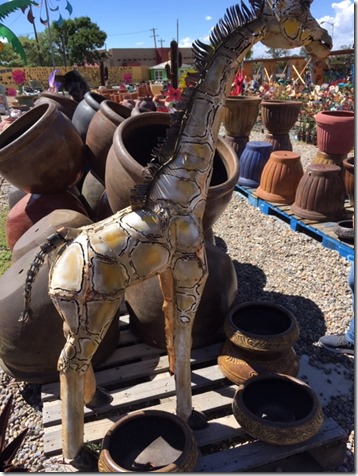 So the decision was made to pay half and they would hold it for me until I could come back for her-I know it’s a girl because she has long curly eyelashes. By then we had the trunk open and the keys retrieved and figured that was the last misadventure in Santa Fe we could stand, so it was back on the road again to Texas.  We had had a great time and seen much of Santa Fe, so truth be told, it was time to head home anyway, and off we went.

The chamisa was in full bloom while we were there, so naturally I had to stop as we were leaving town for a picture. We had enjoyed looking at its sunny yellow flowers the whole trip. 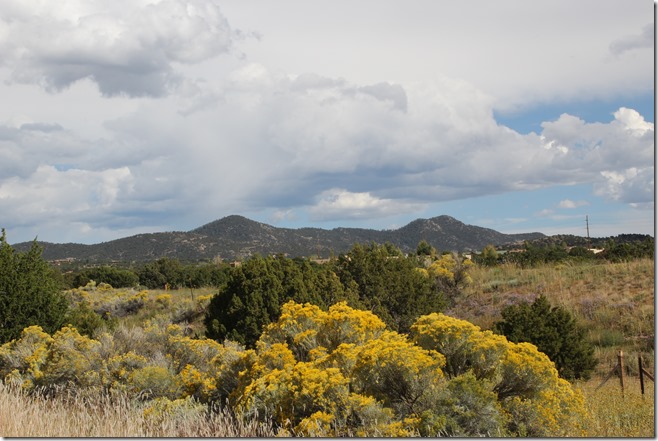 We made it home with no more misadventures, and I bid Jenice goodbye the next day. It was a good trip and I am glad she can now mark Santa Fe off her bucket list.

Now, the rest of the story-that giraffe I was going back for? The short version of the long story about bringing her back is this. First Elaine and I were going back for her in November and also make a shopping trip out of it,  but a week later Caroline and I made a day trip to pick her up. Caroline, it turns out, had been to Santa Fe before, but had not spent much time on the plaza. So, just like with Jenice, we shopped and enjoyed a good meal, this time at the restaurant at the La Fonda. I had the tortilla soup, Caroline had a chicken enchilada plate, and then we were treated to some nice sopapillas. And Caroline and I had no misadventures at all! 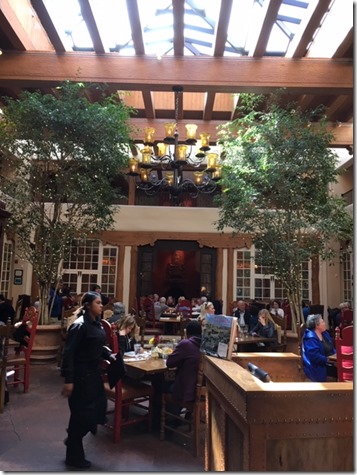 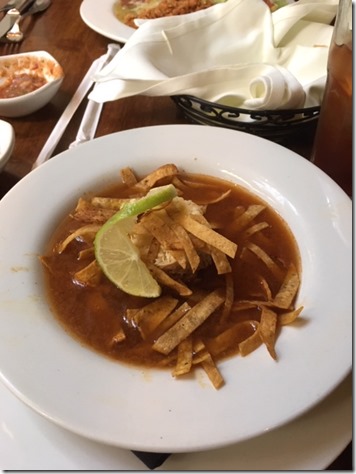 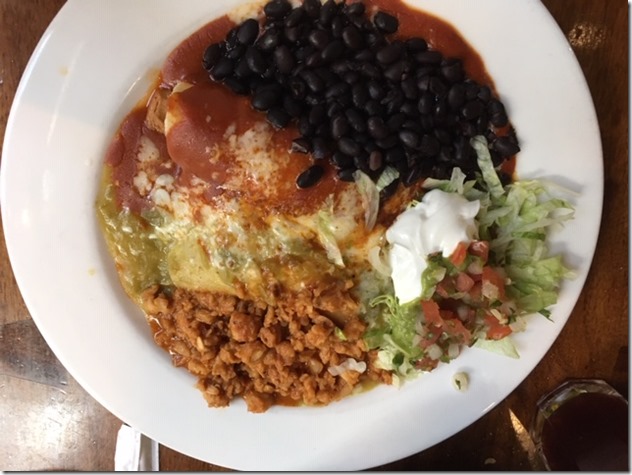 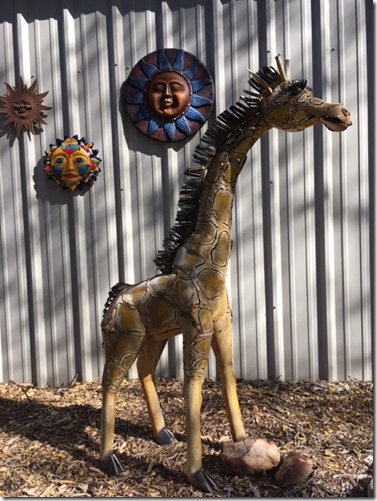