If Ben Franklin once said that guests and fish begin to smell after three days, I think he would say our tumbleweeds are smelling like beached whales. The wind blew with a vengeance from the southeast all day Thursday, April 20th, wreaking havoc in our pasture and on our fence: 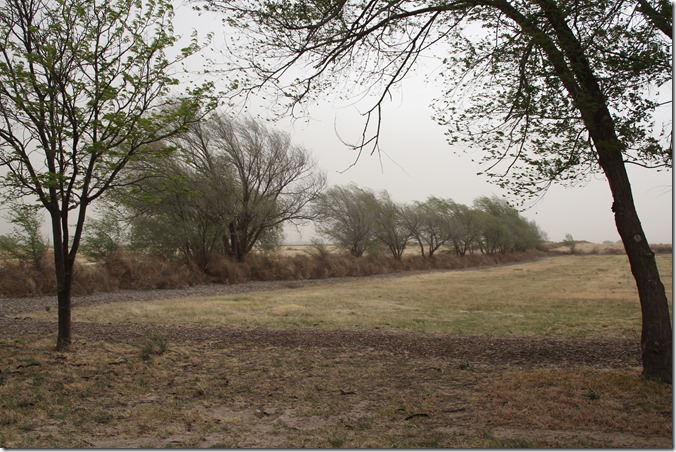 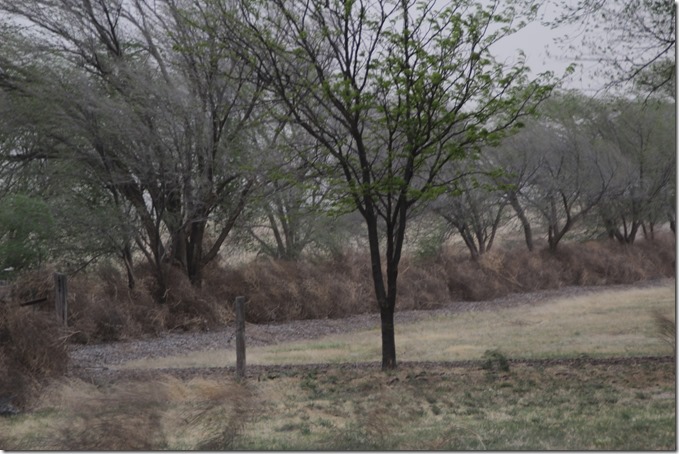 It graced us with more in the back yard. 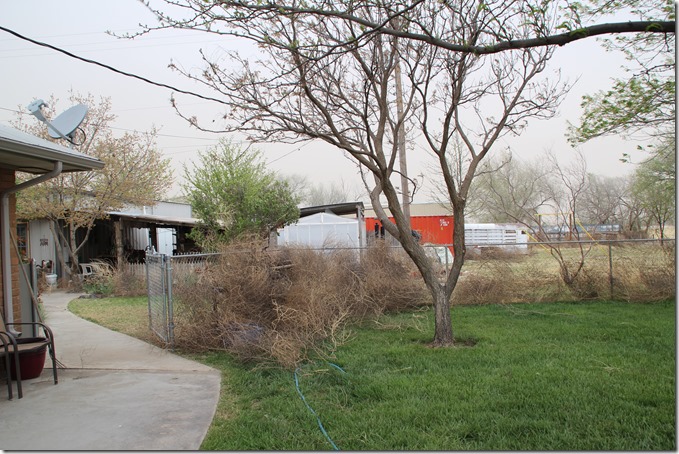 And after three days, on April 23rd, they were still there. As I write this on April 29, they are still here, where, it seems, they will remain forever. 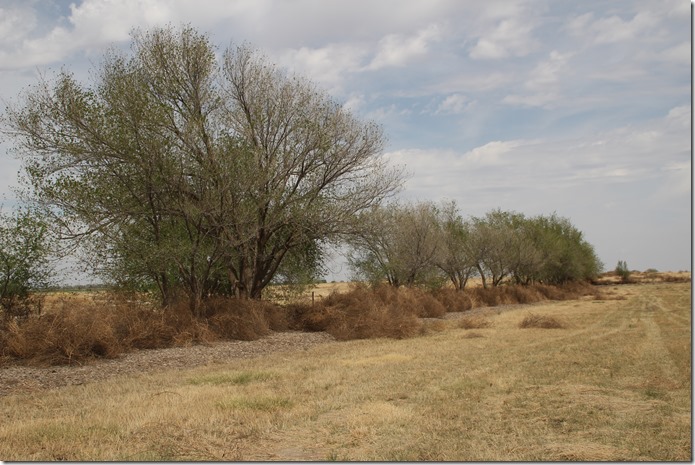 Somewhere under all this lies a walk path which I won’t be able to use for days, weeks, nay, months! because these things are like a cancer you can’t get rid of. 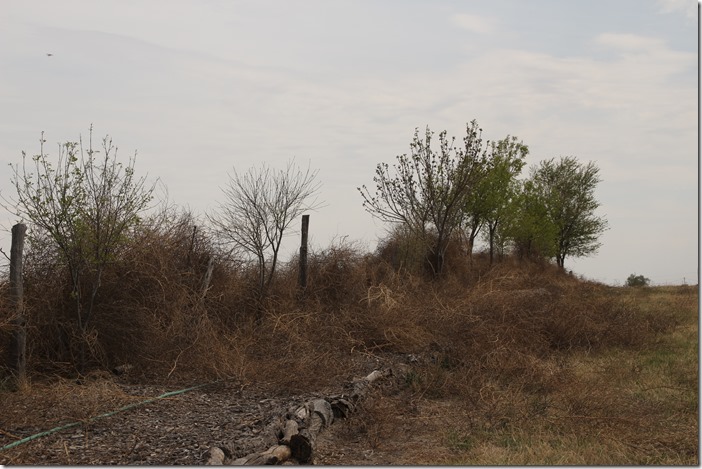 Most of Texas, including us, has been under a burn ban for months, so we can’t pile these things up and burn them, which is really the only effective way to deal with them.  It does no good to gather and  pile them up if you can’t burn them because the next day the wind has moved them out of the pile and all over the place again. I suppose we could gather a few at a time, carry them over to the dumpster across the street, and crush in as many as possible, wait for the trash truck to empty the dumpster and do it all over again, but trust me, that would be a Sisyphean task with no end in sight.

By the end of the weekend, the wind changed directions and blew from the north and scattered some of the devious uninvited guests back into the pasture, only to make their way back to the fence in the days to come.

For those of you who live in West Texas, all this mess comes as no surprise as you deal with these sticker-prone devils all the time, even in town, but maybe not the extent we have to fight them out here in the open. I wrote about tumbleweeds in an earlier blog (Dust Storm-and it’s not even Spring, January 25, 2010), but that attack was nothing compared to this. I have heard stories from the Dust Bowl era of tumbleweeds piling up against wire fences, the blowing dust collecting within the mess eventually becoming solid dirt covering the fence and making a sand dune that the cattle who managed to survive could just walk over at will. If we don’t do something about these, we will see the same thing happen here. 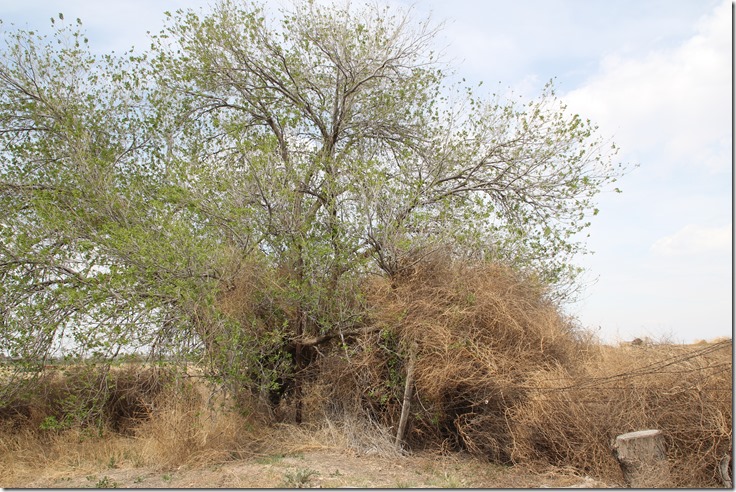 And we won’t be able to do anything about them until it rains-fat chance-and we can actually dispose of them by fire, so I fear we will be demoralized by this sight for a long, long time. We have lived here since 1980 and this is the worst accumulation of tumbleweeds I have seen so far.

I did make it a point to clean them out of the flowers and cactus bed, and Bill removed them, more than once, from the pecan trees valiantly trying to leaf out. A few of those did make it across the street to the dumpster, but the mess in the yard and off the trees has been jammed into a large make-shift container of sorts waiting for their demise. 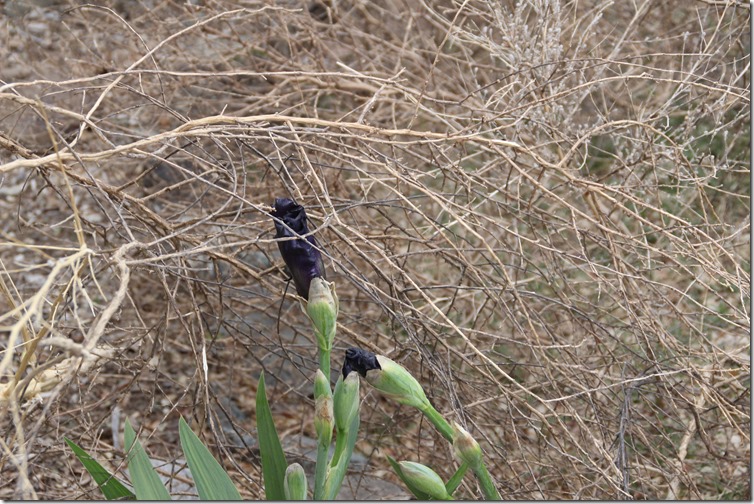 Those of you from somewhere else who think tumbleweeds are interesting, harmless, cute little weeds that race across the prairie representing the wild west and even, I am told, shipping them in for novel Christmas trees during the holidays, come to my house and see what unpleasant prickly creatures they really are. 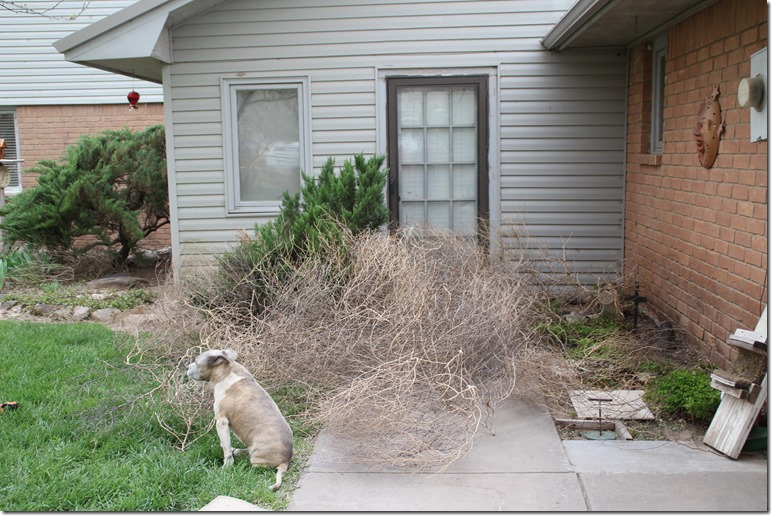 I’ll even send you home with as many as you can cram into your car trunk.