I think it was in 2014, 2013 maybe, that I joined the Muleshoe Art Association. I don’t paint, but photography is considered an art form these days, so I joined and also entered their annual spring art show. This year that show will be held the week of April 9th at AimBank, so this seemed like a good time to look at the 61-year history of the organization.

Unfortunately, the people who were instrumental in getting the group established are gone now, but I have pieced together a little bit of history, one of the main facts being that the club was organized in 1957 by Blanche Lenderson. I  was told she was the driving force that got things started. It was her desire that the association promote creative arts in Muleshoe and the surrounding area by means of exhibitions, lectures, and classes in art and other crafts, and to elevate the level of art appreciation in the community.

Because of her dedication to the cause, it is thought that she served as the first president of the group and probably held that position for more than one year, but that detail has been lost. The first yearbook was compiled for the 1964-65 membership period, and Kitty Moss was listed as serving as president at that time.

in 1961 the association had the pleasure of hosting/sponsoring an art class in Muleshoe once a week for a school semester taught by Dr. Emilio Caballero who was an art professor at the time at West Texas State University (now West Texas A&M University) in Canyon. This no doubt generated more interest in art in general and gave credibility to the value of the association as Muleshoe historically has been home to many talented artists who also chose to be members of the association. Women like founding members or members of long standing like Blanche Lenderson, Kitty Moss, Marie Lenau, Dana Arnold, Mildred Williams, Inez Bobo, Arline Phelps, Olabelle Rennels, Vere Fox, Matilda Slemmons, Melzine Elliott, Marie White, Cecile Foster. Frances Stegall, Velma Davis, and perhaps others whose names I was not able to find.

In the early days, the group held meetings once a month at 2 p.m., just like now. The meeting place hopped around a bit, bouncing from the Muleshoe State Bank meeting room to Bailey County Electric, members’ homes, the Girl Scout Hut when Nelda Merriott was a member, eventually landing in the meeting room of the Muleshoe Public Library where they now hold their monthly meetings on the first Tuesday of every month at, yes, 2 p.m..

Over the years the art association has been blessed with programs and demonstrations from a wide variety of artists not only from Muleshoe but also from Lubbock, Amarillo, Canyon, Olton, Hereford, Friona, Sudan, Levelland, Plainview, Morton, as well as from Taos and Clovis, New Mexico. Artists from those same towns have also joined as members and even entered the Muleshoe juried art show like the one coming up April 9th.

An example of the diversity of programs the association offers came from  Kate Holt from Cannon AFB, Clovis, NM, pictured below, who gave the program on March 7, 2017, and treated members to an interesting and different look at photography by manipulating shutter speed, aperture, and use of color to create unusual effects in photographic images. 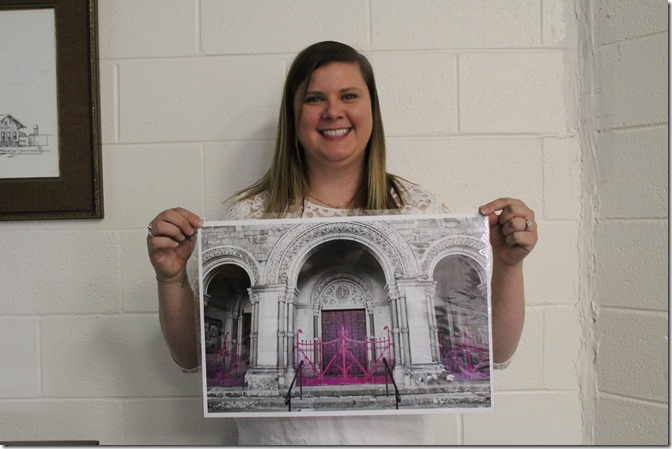 Membership in the art association  has had its ups and downs throughout the years since its inception, but interest and participation in any club or group tends to experience highs and lows over time. Membership now, in 2018, stands at 30, but just like the first president, Blanche Lenderson, current president Martha Hunnicutt is on a mission to stimulate interest and appreciation in art in Muleshoe and in the process perhaps gain new members. Under her leadership, the club is now offering a scholarship to a graduating Muleshoe senior interested in pursuing a career in fine arts, graphic art, art education, anything connected to artistic endeavors. Also under her leadership, the association is now a registered non-profit organization and created a Friends of Muleshoe Art Association which allows the group to pursue other ways to promote artistic projects and offer opportunities for involvement in art in the Muleshoe area.

If you enjoy seeing fine art or would like to enter a piece of your work, come to the spring art show the week of April 9th. You don’t have to be a member to enter, and just about all mediums are accepted: oil, acrylic, watercolor, drawing, photography, even something that might come under the heading of miscellaneous. There is also a category for student art.

So if you are an artist or just appreciate good art or would like to learn more about art, consider a visit to one of the meetings and see if you might like to get involved as a member. An organization with a 61-year history must surely have something to offer.

Thanks to Sandra Chancey, Magann Rennels, Marilyn Riley, and Ann Johnson for helping me ferret out the information for this article.