The Case Against Succulents in Terrariums

Once again I came across an article in a newspaper I disagree with-big surprise, huh? But once again I think succulents are being put in a situation where they are doomed for disappointment. The article I am at odds with recommends planting succulents in terrariums and assures you that succulents are very hard to kill and are adapted to live with little light or watering.

Whaaat? Wait. Light watering; maybe. Little light? I don’t think so! If you have read any of my previous articles about cactus and succulents, you know I think lack of sunlight is the main problem these plants face over and over and what ultimately leads to their demise. Except for precious few species that tolerate and actually prefer low light, most notably euphorbia decaryii, succulents need sunshine. I may not know everything about every succulent, but I do know how much they need sunshine and light from my own experience with them for many years.

Terrariums were first sort of accidentally created back in 1842 by British botanist Nathaniel Ward when he was studying the behavior of insects captured in jars and left one of the jars closed. A fern spore grew in the jar, germinated into a plant, and became the first terrarium. It was a hit during the Victorian era in Great Britain. In time the process proved itself and terrariums were born. The point was that the closed terrariums created their own little ecosystem, requiring the occasional opening of the container to remove excess moisture to prevent mold and to start the process over and to make sure moisture was appropriate for healthy plants.

Fast forward to the 1970s and terrariums became all the rage again. I even tried one with no success. Apparently I was wasn’t the only one with no success and the fad died out. And now here we are at a time when succulents are all the rage, so someone got the bright idea to combine the two ideas in hopes of creating a low maintenance way to enjoy plants indoors.

Succulents planted in all kinds of unusual containers also became a hot topic, including clear class containers that would lend themselves to being called terrariums. True terrariums, like the originals, were closed glass containers. What also passes for terrariums now are open glass containers, more like a bowl or a round hanging ball with a large opening in it.

If a closed terrarium gets too much sunlight it gets too hot, too much moisture and heat build up and you wind up with steamed dead plants. The plants also wind up sitting in wet, soggy soil that never dries out, something succulents do not like. So if you put a succulent terrarium, open or closed, away from the light, then the succulents have to reach for the light and lose their pretty rosette shapes as they get leggy and ugly helplessly searching for more sunlight. Your pretty little garden will look nice for about a month, be forgotten, start to look sad and eventually be thrown out.

True terrariums were meant to house foliage plants like small ferns, mosses, orchids, tillandsias, and bromeliads and still had to be maintained with occasional cleanings and new water. If there is no condensation on the walls of the terrariums the plants will wilt and die from lack of water.

Succulents are drought-tolerant plants that need lots of sunlight, good drainage, and yes, some water. These conditions just aren’t going to be met in a closed terrarium, and not fulfilled at all if you believe that statement that they are adapted to low light. And just spraying or misty a succulent won’t get the job done, either. Their roots need water followed by a chance to dry out before being watered again. They are just much happier in an open shallow container outside in the sunshine or filtered sunlight.

So if you just must have a succulent terrarium, don’t try to use fleshy varieties like echeverias, sedums, or pachyphytums because they won’t be happy, and neither will you. Try instead something like the euphorbia decaryii I mentioned earlier,or even better, a tillandsia, usually called air plants in the stores which are easy to find right  now. Put the container fairly close to a window and mist it daily.

I have had this euphorbia decaryii for many years. It is very happy in this east location inside the house where it gets morning sunshine and then general sunlight the rest of the day. It sits about four feet from the windows. It should work in a terrarium-type container but might outgrow it a bit faster than an air plant would. 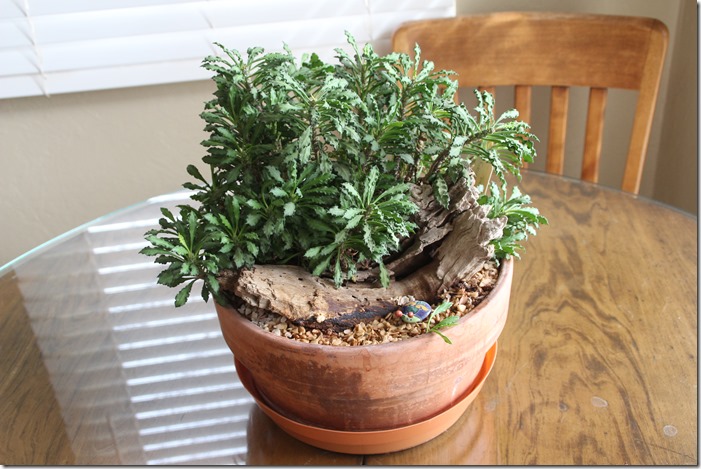 My son gave me this hanging globe, which by today’s standards would be called a terrarium, and I have it hanging close to a south exposure window and mist it every morning. I use a small spray bottle I found in the hair/cosmetics department at the drug store and use distilled water because it tends to not leave water spots on the glass. My tillandsias are rooted not in soil but in crushed glass. You could also use fish gravel, or light soil, but the glass is cleaner to work with. I do take mine apart from time to time, wash the plants and the crushed glass, clean the container, replant, and hang. Chopsticks or long tweezers are helpful in positioning the plants. 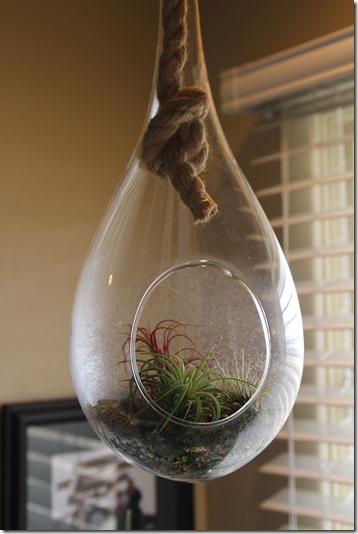 I have had this container about three years, and the plants have done well. I had just misted it for the day when I took this picture. I wet everything inside to the point that water drips off the ends of the plants and collects on the glass as you see here.  By the end of the day no water is visible. Next morning I do it again. 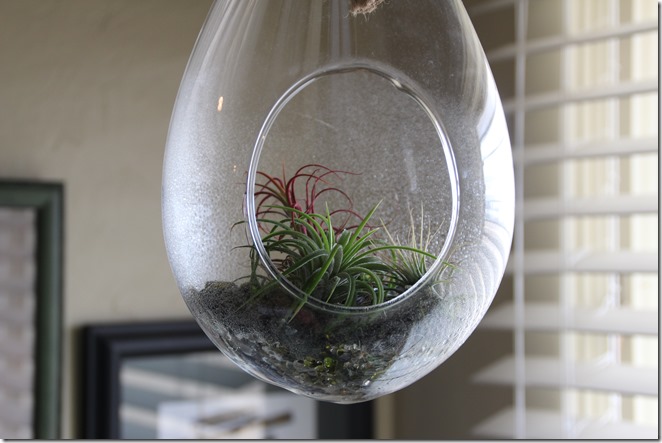 Nurseries will gladly sell you whatever you want for a terrarium, but not everyone really understands the needs of succulents, so I hope you give it some thought and buy plants that are more adapted to low light in the house.

For some other ideas on houseplants indoors, I would refer you to another article I wrote on the subject, “Succulents as House Plants for the Winter,” from January 7, 2017. Type this title in the search line and the story will come up.