Now Playing at Your Local United- The Birds!

I have been fascinated by the grackles who have chosen the trees at United for their winter roosting site. This is not an advertisement for United, by the way; that just happens to be where I do my grocery shopping, which means I see those birds when I go to the store. Indeed, how could anyone not notice them! Besides the leafless trees becoming heavy and black with birds as the sun sets, the cacophony of their happy, relentless, extremely loud chirping makes it pretty much impossible to ignore them. They can even be heard inside the building when you go to pick up eggs or milk. 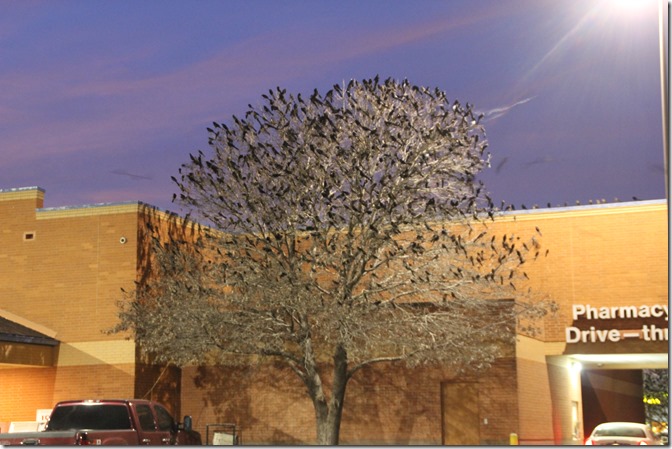 I know we have grackles all over town, but at night they seem to really like the United parking lot trees. I have seen them thick enough on the ground at the golf course driving range and in the field behind our house to cover the grass like a black blanket blown in by the wind. They line up on the power lines along the highway. But by evening they are gone, off somewhere else to roost for the night. And apparently that somewhere else is the trees at United.

I decided they were just too neat a phenomenon not to investigate further, so I first called the Wildlife Refuge to find out if in fact these were grackles or blackbirds or whatever. I spoke with Janie Allen who told me while they sometimes hang out with black birds and might be mistaken for them, they are indeed grackles. What we have here are common grackles and great-tailed grackles, also known as Mexican grackles, as I found out when I also did a little research on the Internet. Based on what I read, common grackles range from the east coast to the Rocky Mountains and don’t exactly migrate, but a map showed a breeding area and winter area which included the Muleshoe area. The great-tailed Mexican grackles cover much more territory, ranging as far as southern Canada through the U.S., Mexico, and Central America. The map shows them in Texas pretty much year-round. Based on that and the pictures shown, I think we must have more of the great-tails here, and while neither type is supposed to migrate, they seem to be much more conspicuous in the wintertime.

Both types are omnivorous and eat a variety of foodstuffs; seeds, small reptiles, toads, lizards, tiny rodents, insects, berries, garbage, just about anything. They prefer to eat things on the ground rather than out of a feeder and will snatch discarded food from outdoor eating areas, and they really like grains from crops like corn, which means of course, farmers are not fans of these birds. Like a bunch of crows, grackles are referred to as a murder of grackles, or sometimes a plague of grackles. I suspect farmers think plague is the more fitting moniker.

But enough on the research-let’s get back to United’s squatters. About 30 minutes before sundown last week I gathered up my camera and drove to the store to document their behavior. I found bare, empty trees. 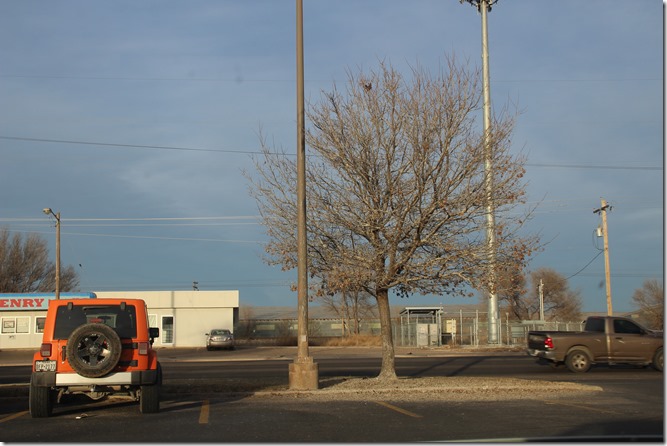 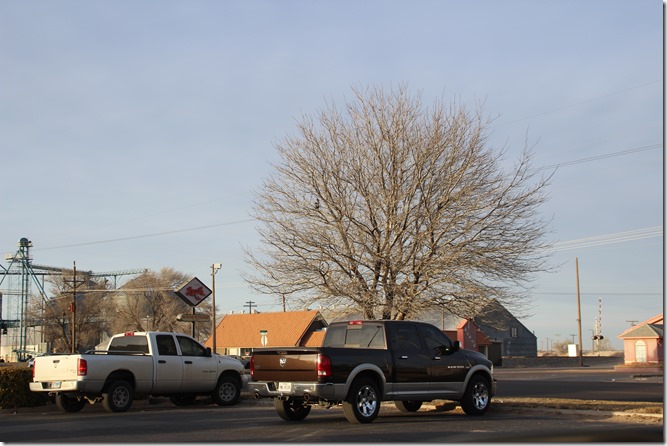 And then as the sun started going down, they began to gather here and there. 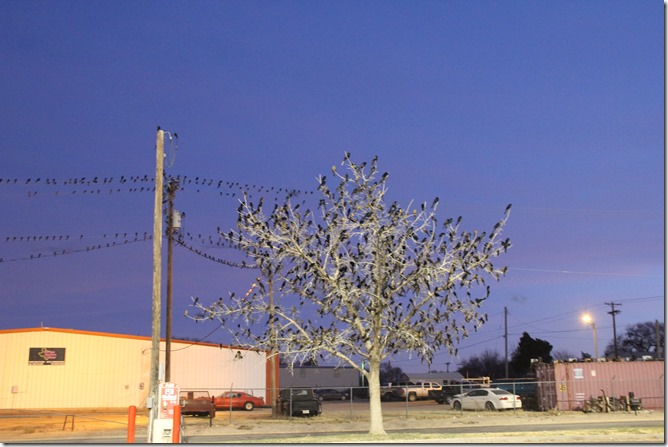 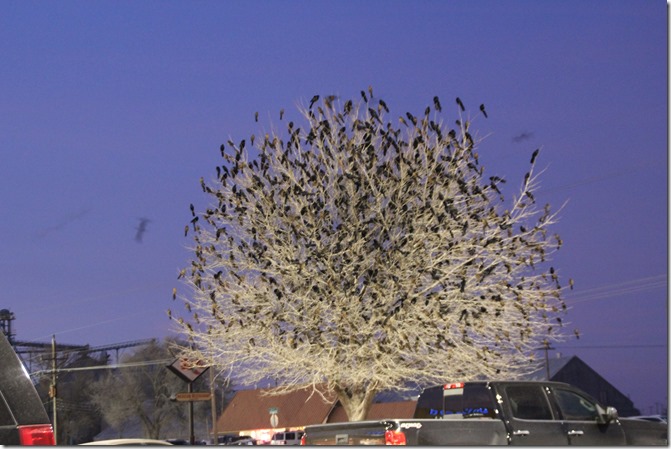 And by sundown the trees were loaded with the critters. 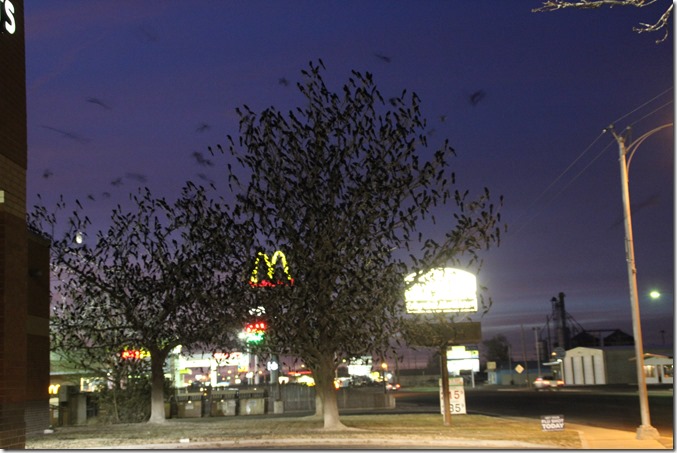 I can’t help but think of Alfred Hitchcock’s 1963 horror movie The Birds when these birds converge on United’s trees. The only difference is the birds in the movie were eerily quiet, plotting their next attack on hapless humans; these birds are so loud they couldn’t begin to stage a surprise silent attack!

Next morning I arose well before sunrise and drove back down to the store to be sure that they did indeed roost there all night. 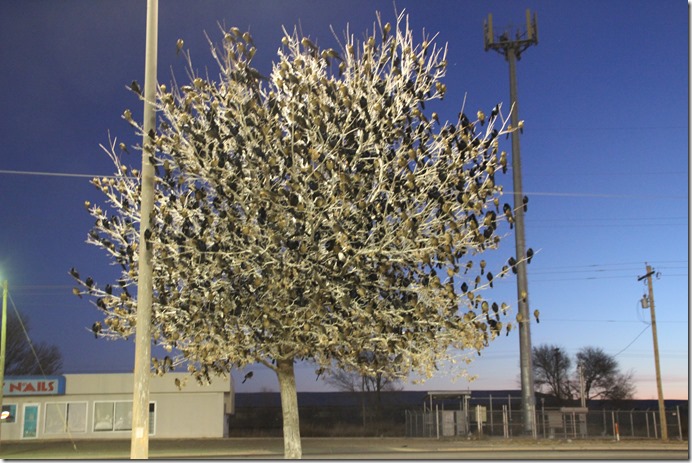 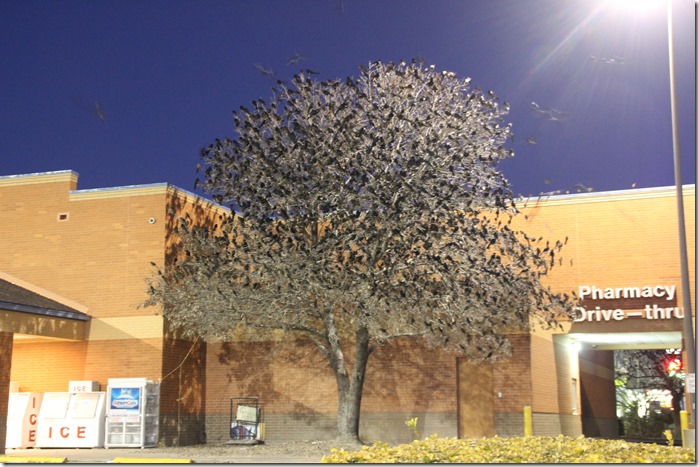 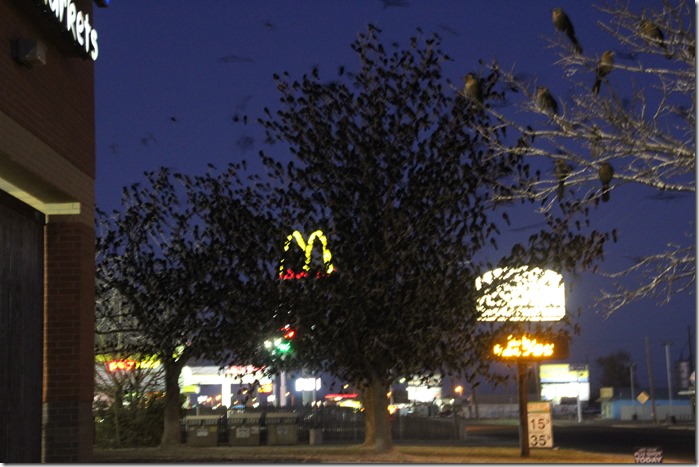 And they did, but as the sky lightened and the sun appeared, the birds disappeared. 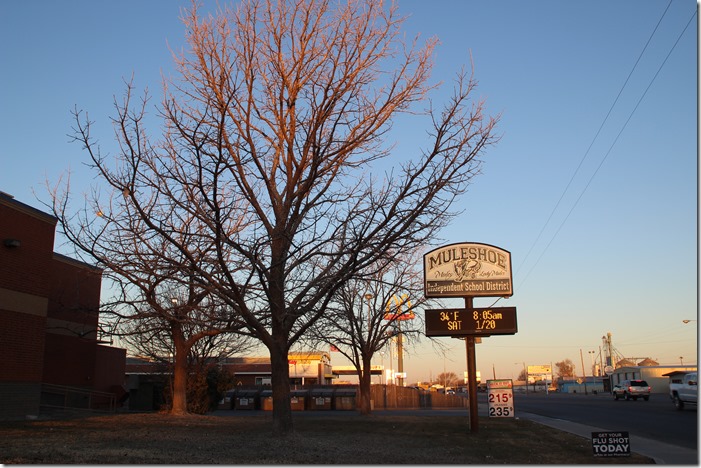 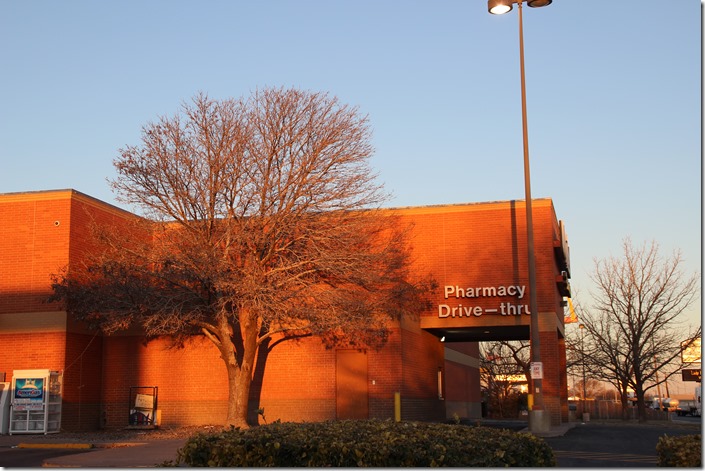 And in the quiet after they leave, the white messes left under the trees remind us they were there. Which also probably makes employees at United consider them a plague, too! 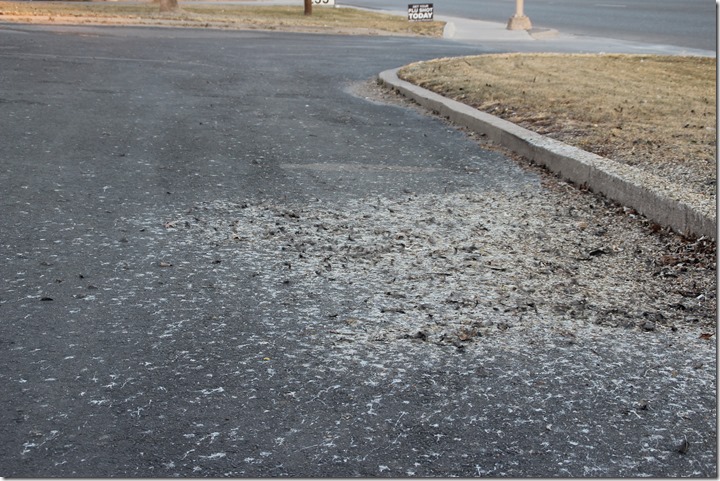 Between these messes and the theft of grain in farmers’ fields, and maybe for some people the noise they make, many people aren’t as enamored of them as I am. Studies have shown that while they do have a robust population now, recent National Audubon Society studies have shown a decline in their population by 61 % to 73 million birds compared to a high of over 190 million in the past.

The brown birds, by the way, are female grackles, and with closer observation in different light we would see touches of iridescent purple on the black males. 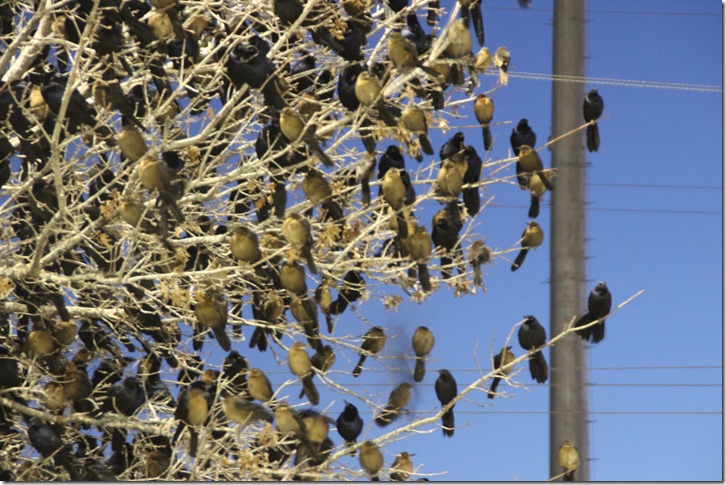 I’ll admit it; I always have to smile when I see and hear them on trips to the grocery store. And if we treat them nicely, maybe they won’t plot against us like Hitchcock’s avian villains did.

Thanks to Janie Allen at the Muleshoe Wildlife Refuge for helping me with this story.

For those of you who might like to add to your bird watching skills, or perhaps embark on bird watching as a new hobby, Jonny Anderson has created a thorough step-by-step guide that could help beginners or advanced  birders. Go to  https://hobbyhelp.com/bird-watching/   for his guide.