The Little Poinsettia That Could

I am the person in charge of flowers at our Methodist church, which includes arrangements on the altar and the seasonal Easter lilies and Christmas poinsettias. I make sure the arrangements are always on display Sunday mornings, then put them in the refrigerator to extend their life and keep them watered during the week. I arrange the seasonal pots of lilies and poinsettias in the sanctuary and then water them while they are on display for their respective holidays.

Church members are then given the opportunity to buy one of the plants in honor of or in memory of someone and those names are listed in the church bulletin. After the holiday is over those plants can then be taken home by the honorees or the person who gave one in memory of someone. Usually many plants are not claimed, so it falls to me to do something with them. I plant most of the leftover Easter lilies and reuse their pots. The poinsettias, being tropical plants, won’t live in the ground up here and usually don’t do well left in their pots over the winter, so I sadly bid them goodbye, recycle the dirt from the pots and reuse the pots.

Poinsettias seem to be a bit temperamental up here and even if I try to keep them alive, they don’t always do well. Last year only one poinsettia was left at church, so I brought it home and put it in the greenhouse, planning to dispose of it once it dropped all its leaves.

It’s dirt dried out quickly in the greenhouse.Commercial greenhouse soil has peat moss in it, which I don’t like because if it ever dries out completely, it shrinks up and won’t reabsorb moisture well, and the poinsettia didn’t get watered as regularly as it did at church, what with being surrounded by drought-tolerant plants in the greenhouse on a different watering schedule, but it held on gallantly. I repotted it in my good compost/perlite cactus dirt, put it in a clay pot, and it was much happier.

Spring came and it went outside, and while it didn’t grow much bigger, it sprouted new leaves and did fine.

Winter came and it went inside with the other non-cold-hardy plants. Having heard about putting brown paper bags over the plant or putting it in a closet and all that to force the red leaves, or bracts, as they are called, to come back, which I wasn’t willing to fool with, the next best thing was to set it in the darkest corner of the greenhouse, a corner that the succulents don’t like.

Time passed and I kind of forgot about it, watering it when everything else got watered. And then Bingo! There it was, all pretty and red and ready for the holidays! 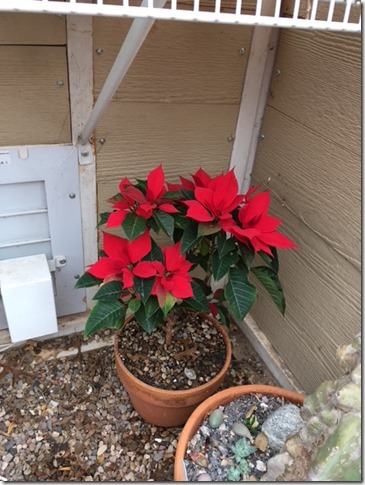 I had no choice but to reward it by bringing it in the house to be a part of this year’s Christmas decorations along with the crown of thorns, another euphorbia, that was also blooming red for the holidays. I think they both look nice with my Christmas-themed Painted Ponies. 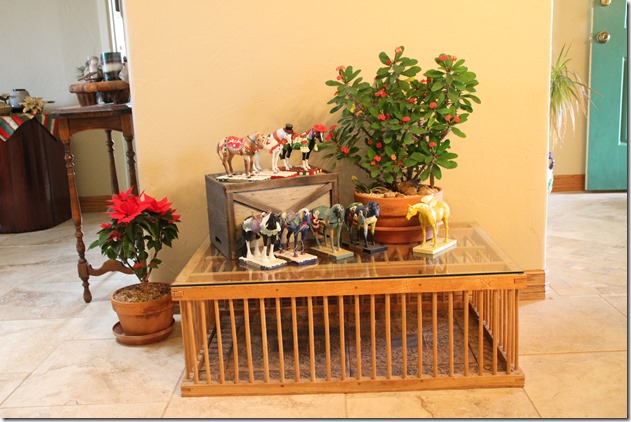 I suspect this determined little plant turned red in spite of me, dark greenhouse corner notwithstanding, so I was then curious just exactly what it was that I was supposed to do to make the leaves turn red. I learned that the color in the bracts is developed through a process called photoperiodism, which means the plant needs 12 hours of darkness followed by days of abundant light for at least five days or more in a row.  Poinsettias are indigenous to Mexico and become large shrubs outdoors, so I guess the weather in Mexico provides them with this pattern because they do change colors down there, too. I also read that they can grow outside in colder regions if they are protected from frost. That may be, but I still don’t think they would make it outside in Muleshoe.

I will enjoy the plant during the holidays this year, put it back in the greenhouse for the rest of the winter, and see how it fares next year when everything moves outside. 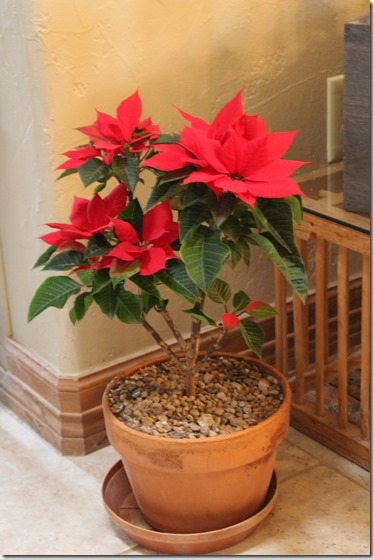 I will be anxious to see if it turns red again next December. And who knows? It may gain a friend if any church poinsettias need a home after Christmas this year.

I’ll have to find another dark corner.