I went to my first Cactus and Succulent Society of America (CSSA) convention in 2011 at Tucson, Arizona. The Tucson Cactus and Succulent Society served as hosts. One thing they had done to welcome everyone to their city for the convention was to provide everyone who attended the banquet with a seed-propagated baby ferocactus wislizeni f. flavispina to take home after the convention. Apparently far in advance of the convention they had painstakingly gathered the seeds from cactus which grow naturally in the area, germinated them, and patiently cared for them until they were about the size of my fist, somewhere between a baseball and a softball in size, potted them up nicely, and placed one at each place setting at the banquet. Not only did they provide dramatic and event-appropriate table decorations, they gave us all a really nice memento to take home from the convention.

So I brought mine home and watched it carefully, repotting as it grew. I chose not to put it in the ground for fear our colder winters would do it in. That was six years ago. Now it is about the size of a basketball, perhaps a bit bigger, and I am now being rewarded for my attention to its care. So far I have enjoyed five blooms opening at different times. 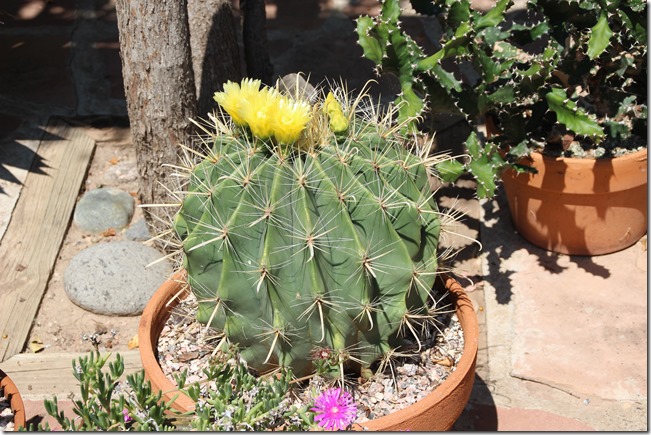 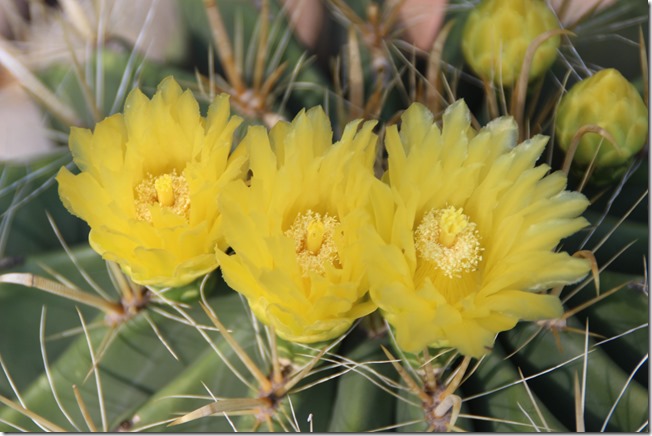 These blooms stayed open for three days, and then the other two opened. 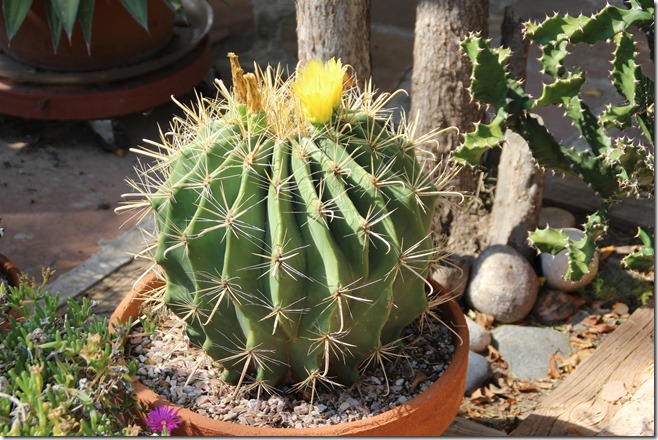 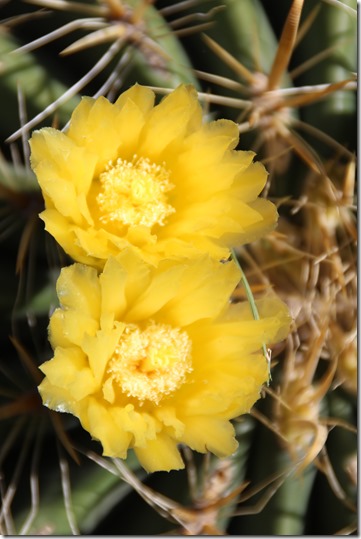 Also known as the golden fishhook barrel, ferocactus wislizeni f. flavispina has these bright lemony yellow flowers which are a brighter yellow than most yellow cactus flowers that have darker colors on the outside layer of petals. Many also have red centers, which these do not.  Note the curve at the end of the larger center spine, like a fishhook. 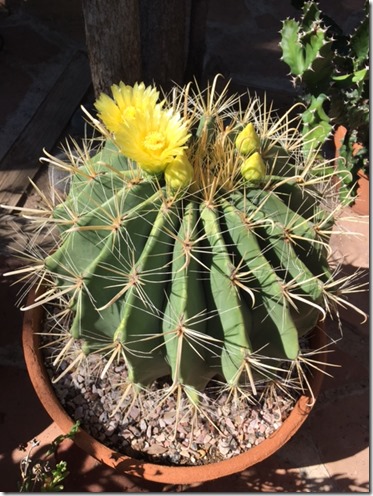 I googled this cactus and the images I found had more orange blooms than pure yellow, and It seems to me I remember something about the seeds being purposely collected from only the cactus producing the yellow flowers, or perhaps they did some hybridization to get the pure yellow color. This all happened in 2011, and I have slept since then and was not smart enough to keep a journal of the trip back then, so it will remain an unsolved mystery.

Don’t care. I appreciate the time and trouble the Tucson members went through to bless me with this cool cactus. This cactus can grow to anywhere from three to six feet in height! I think I hope it grows slowly and spends all its energy making these lovely flowers or I may be forced to put it in the ground and then protect it every winter.

I can do that.