I had another new experience Saturday when I visited the Muleshoe RoadRiders Motorcycle Rally at the Bailey County Coliseum. Event coordinators Tuffy and Becky McDaniel told me 55 riders had registered for the rally, down a bit from previous years, no doubt due to the cool wet weather that had settled in for the weekend. Fifty-five may have signed up, but a good number of us showed up to watch the games and admire the bikes. 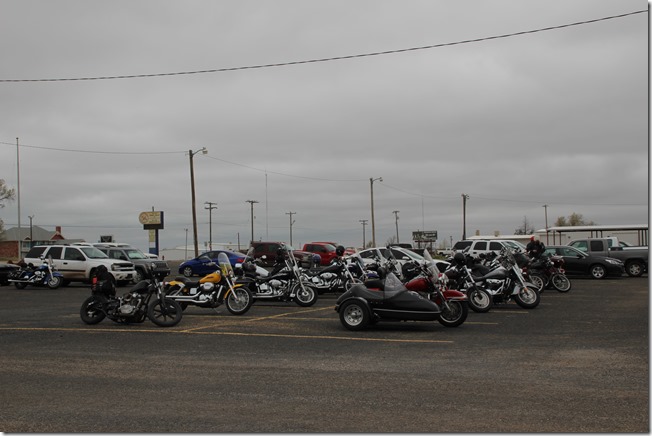 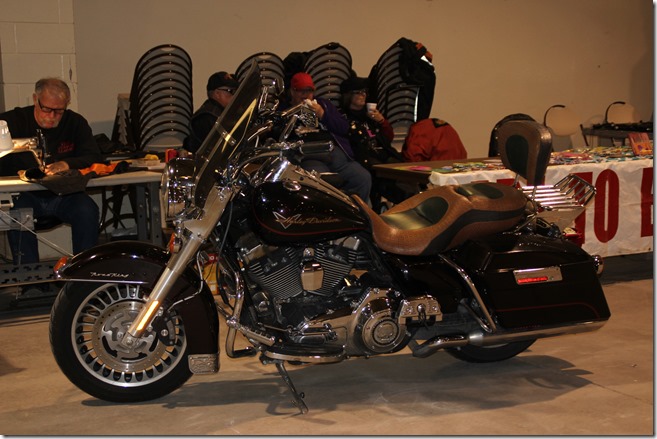 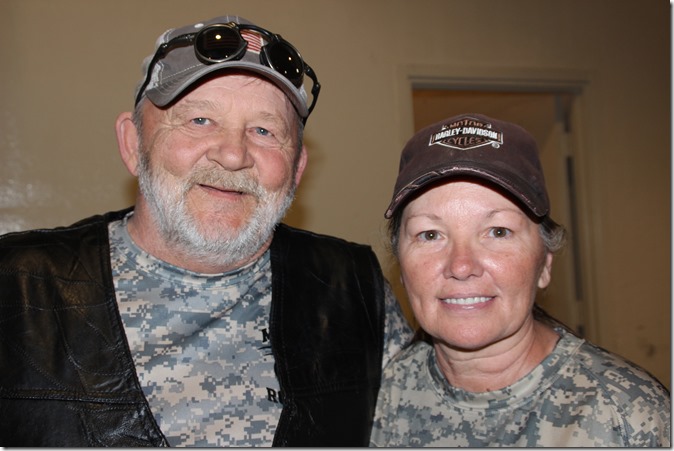 Tuffy and Becky gave me a quick history of the rally before the afternoon’s games began. A motorcycle club was started in 1971 by then-Muleshoe chief of police Harold White. Among the ten members were White and his wife Margaret, Joe and Patsy Young, and Joe and Rita Albro. In 1972 Margaret White wrote a letter to Roger Hull, the editor of Roadrunner magazine, later renamed Cycle Rider, and invited him to come take a ride with the Muleshoe motorcyclists. And he came! Hull and the members took a ride, and the next month the Muleshoe RoadRiders were featured in the magazine. Then in the summer of 1973 the group went on a weekend ride to the Abilene area and Joe Albro was fatally injured in a collision with an 18-wheeler and died. The group stopped riding.

From 1973 to 1980 there was no club. Then in the 80s some local riders, including Tuffy’s dad, Don McDaniel, along with Lee Kimbrough, James Mason, Odell Rasco and others fired things up again, and the Muleshoe RoadRiders held their first rally that year, which brings us to this year’s 35th rally. 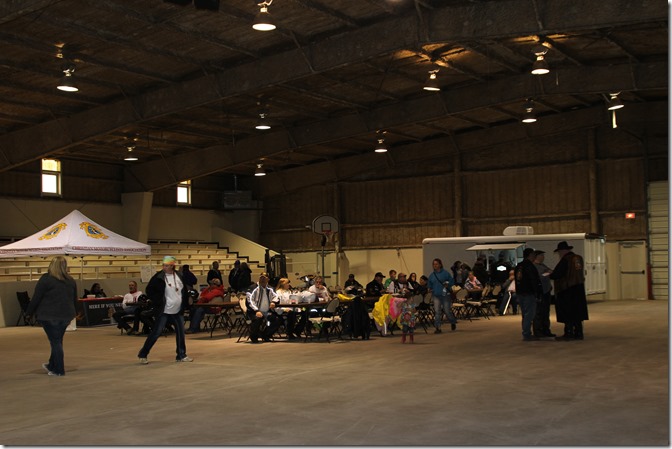 These days the club boasts about 22 members who meet, visit, and take trips as a group to the New Mexico mountains at Red River and Ruidoso, to the Texas Hill Country for bluebonnet trips and wherever else the mood takes them. Some members make the road trips to the big rallies at Sturgis, North Dakota, and the Austin ROT, but they always enjoy getting together at their own rally every year. Becky is the president, Hurchel Harden is the vice-president, Kathy Clark serves as secretary, Danny Dickerson is the treasurer, and Lonnie Adrian is the road captain, whose job it is to set up those road trips taken by the club. Sergio Leal and Curtis Shelburne also serve as club chaplains. Meetings are held on the first Tuesday of the month and involve a supper run, but only in good weather-members aren’t too keen on doing that during the winter months!

The rally opened Friday with registration, vendor set-up, and the Inside Light Show, which gives riders the chance to gussy up their bikes with lights and then show them off in a parade in the darkened coliseum as the audience votes for the people’s choice winner. Lee Fox from New Mexico was the winner. I missed the parade, but his motorcycle showed off its bright blue lights during all the games Saturday. I’m sure it was much more impressive in the dark, but you get the idea. Tom Ladd from Muleshoe was awarded second place on his three-wheeler. 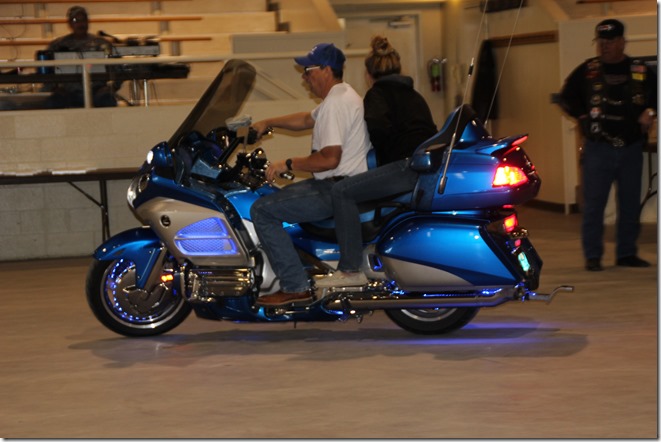 The morning’s contest was the Tour Run, which is really a version of poker, but legally can’t be called that any more! I probably won’t do the game justice, but basically it involves drawing a card at the coliseum and then following a map to various locations where four more cards are pulled from the deck, covering 75.9 miles in the process. A sixth card can be bought for a mere $5 in the hopes of building a better winning hand. The best hand wins $100, second gets $50, and low hand gets $25.

Lunch was available at the Blue Line Pit BBQ food truck manned by the Muleshoe Police Department. Tiffany Nash and her kids were happy to take advantage of the truck’s good food. 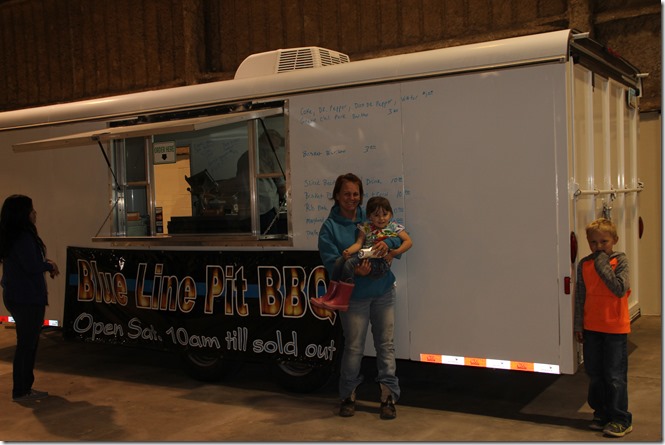 Vendors were also there to offer their wares appropriate to motorcycle riders. Bikes were also for sale. 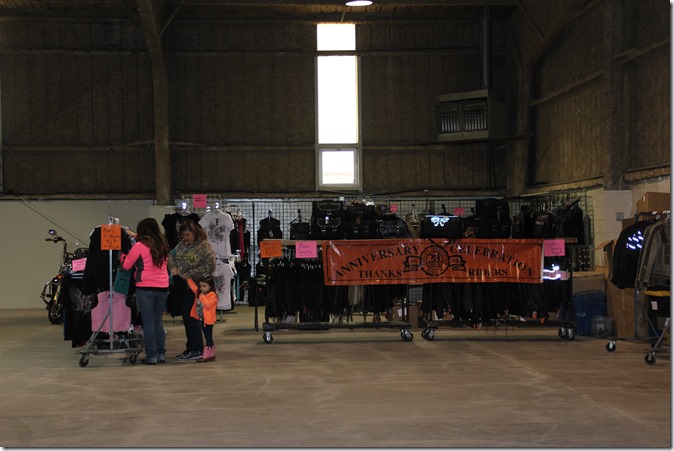 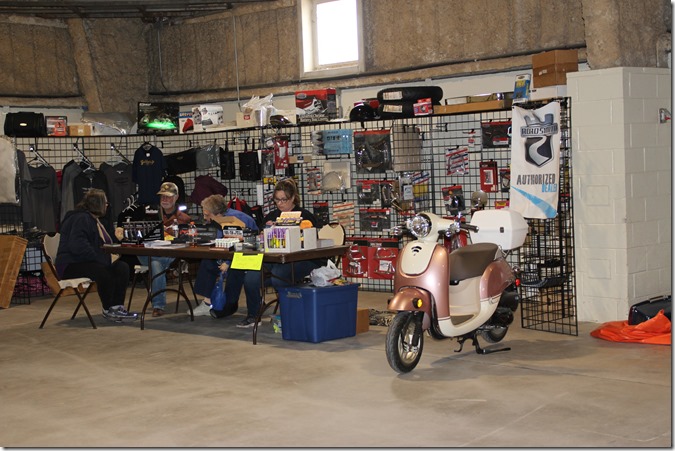 After lunch the games began. It sort of reminded me of when I entered horse shows as a kid. Barrel racing, ring race, and pole bending were replaced by the hockey puck, tennis ball, horseshoe pitching, darts, and the slow race. The hockey puck contest was first. Each driver  and a passenger had to move a hockey puck around traffic cones without losing the puck, like in the first picture, and without the driver having to steady the bike by putting his or her feet on the ground, which by the way, was a disqualification for all the games. No feet on the floor to balance the bike. 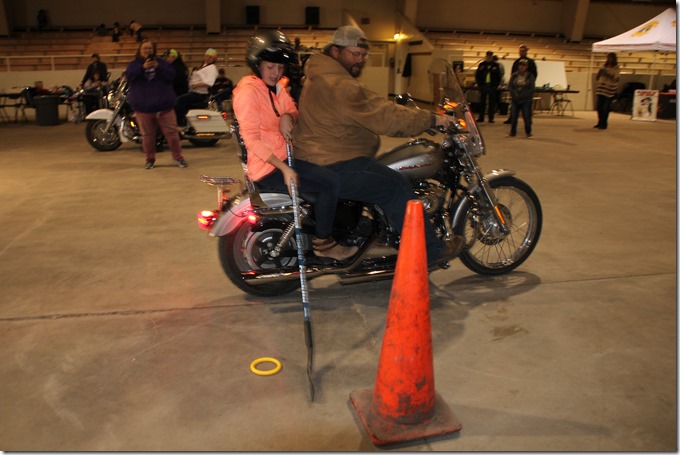 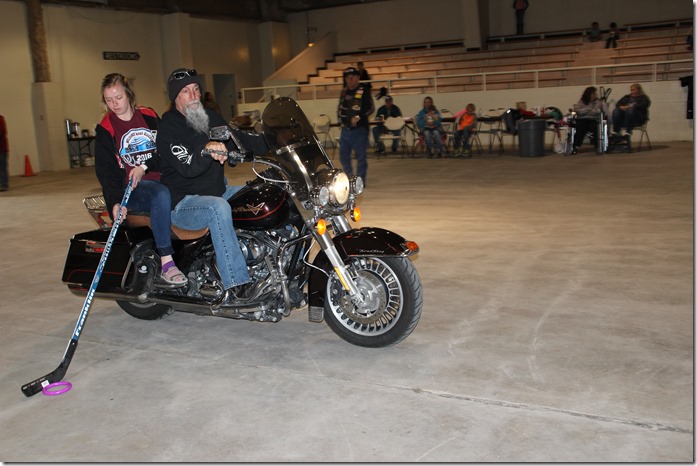 Next was the tennis ball game, picking as many tennis balls off the cones as possible and then dropping them in the lined-up buckets. 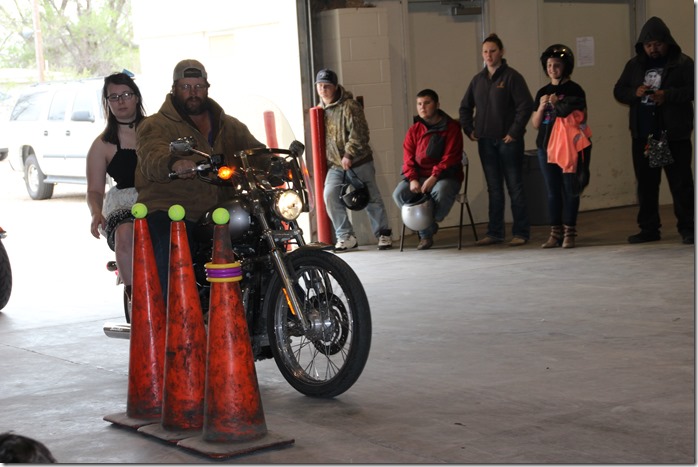 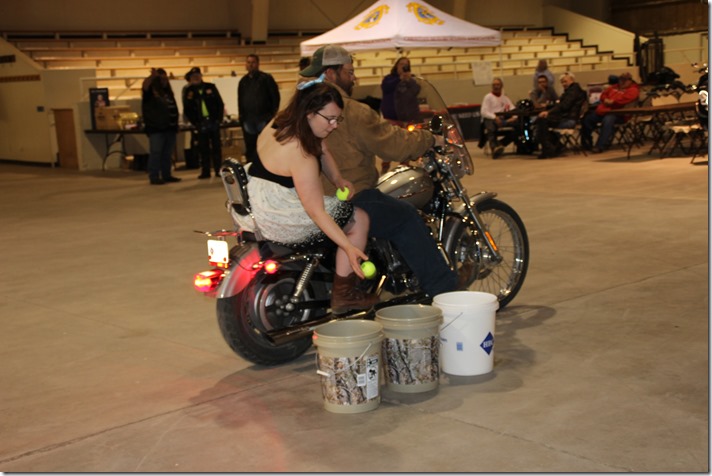 Horseshoe pitching looked the hardest to me, a mounted variation of regular horseshoes. 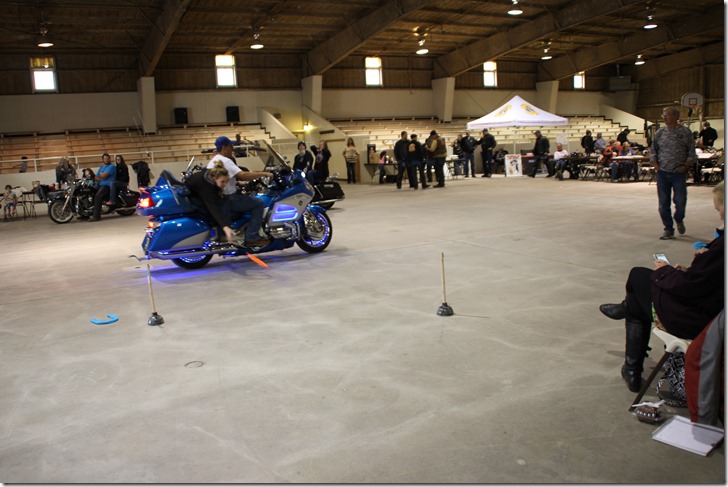 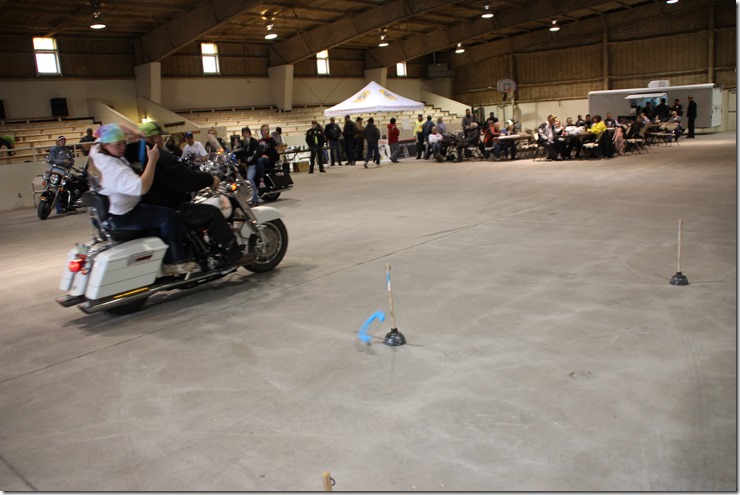 Darts looked hard, too. Look carefully and you can see the black dart thrown on the dart board. Prizes taped to the board were what the contestants were trying to hit. 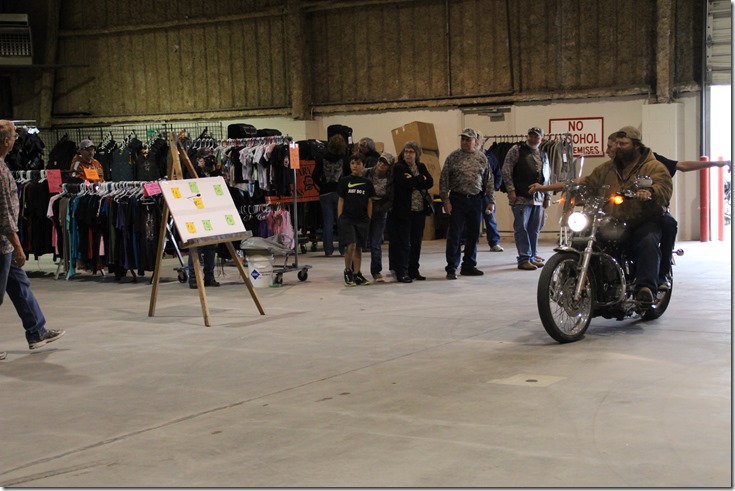 The final game was the slow race, which I couldn’t stay for. But it is just that, who can go the slowest for a set distance with no feet touching the floor. The opposite of a horse race, the winning time would be the slowest time, not the fastest.

Normally the group would then parade by the Park View Nursing Home to the delight of the residents, but the cold weather made that a bad idea this year. Residents out in cold wet weather was not the healthiest thing to do, so the riders decided to not to take a chance on getting anyone sick and went right to the presentation of the awards for all the contests held during the rally.

Member Jan Smith was in charge of the contingency prizes, items donated by Muleshoe merchants. A ticket came with each registration form and then matching tickets were drawn to see who would win the donated prizes. 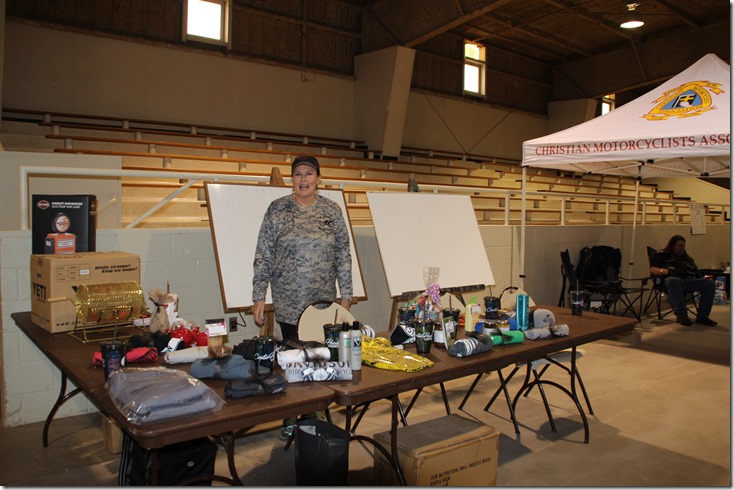 Jan was also sporting one of the club’s official T-shirts, made every year by Lonnie Adrian. 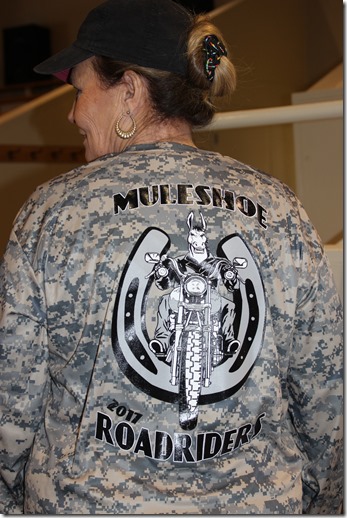 Member Eddie Alvarado supplied music and sound during the event. 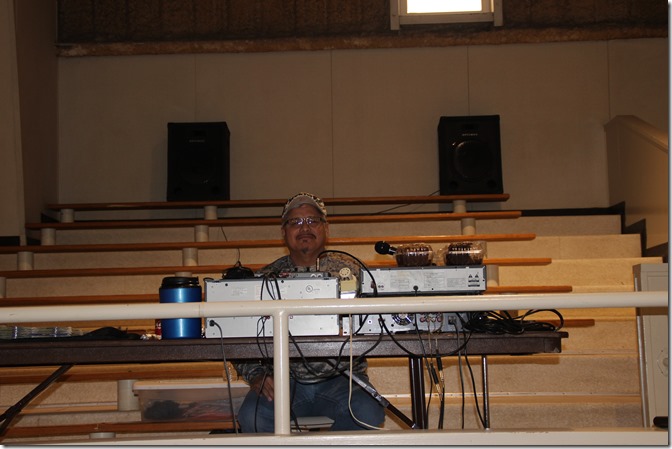 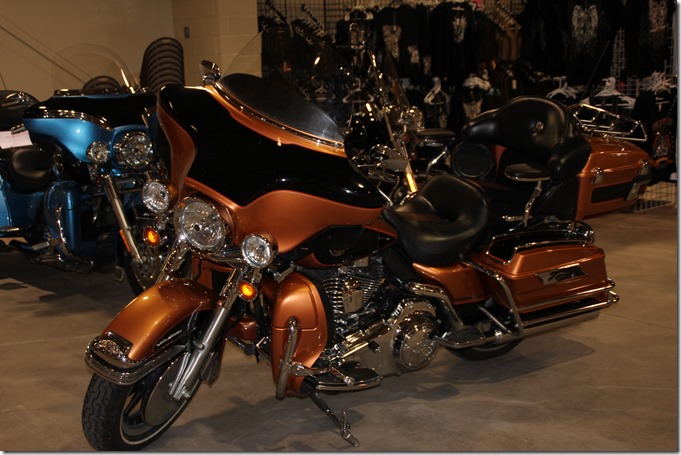 My thanks to Tuffy and Becky McDaniel and Lonnie Adrian for helping me with information for this article.