Succulents as Houseplants for the Winter

Now that winter has set in-we’re supposed to get down to minus 4 degrees tonight-I keep seeing these articles about how wonderful succulents are as indoor houseplants over the cold months. I think the main reason succulents are touted as easy indoor plants is the fact that they don’t require as much water and care as others might. Well, there might be something to that, but as much as I praise succulents, I’m not sure they are as fool-proof as these articles would lead you to believe. I will be the first to admit I don’t know everything there is to know about succulents, but I have some reservations about succulents being the “new African violets,” as one article put it.

To begin with, African violets aren’t necessarily all that easy to grow as houseplants themselves. My mother always had a windowsill full of beautiful, blooming violets. I tried my hand with African violets and have yet to see a flower for my troubles! Just because some people do well with a particular plant doesn’t mean everyone will have the same luck. I seem to have the knack to grow cactus and succulents, whereas stories of people killing their cactus and succulents are legend. So, what works for one won’t necessarily work for someone else.

And Bingo! there it is. I am here to tell you that “bright” light just may not be enough. I harp on giving succulents enough sunshine all the time to keep them from reaching for the light and getting leggy and ugly. I know to give them as much light as possible while they have to be cooped up inside during the cold months. But even as hard as I try, I have some varieties out in the barn, a barn with four huge skylights and three big double windows, that are still not getting enough sunlight. The reality is succulents are not happy campers inside; they really like it outside in the sunshine and fresh air. People read these articles, think they’ve found the miracle plant, and  when their jade tree gets leggy and ugly, their owners aren’t happy with them and fuss about succulents being hard to grow. And it’s really not the plant’s fault: it’s just the nature of the beast. Or plant, in this case. 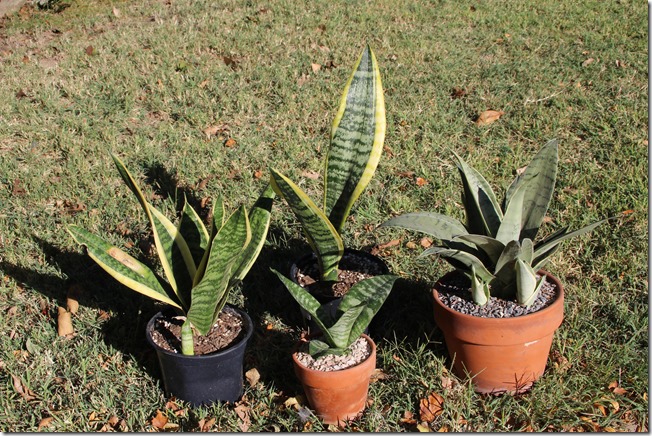 The two taller ones to the left and in the back are young plants and will get taller. You have probably seen other really tall, slender varieties stuck back in a forgotten corner at some doctor’s office leading a dismal existence in the dark. And they will survive, but  won’t thrive or look very pretty. Others, like the small one in the front, make a nice short compact rosette. The hybrid on the right makes a larger rosette shaped something like an aloe. The Lucille Polan variety below has really nice color and doesn’t get as large as some of the others. 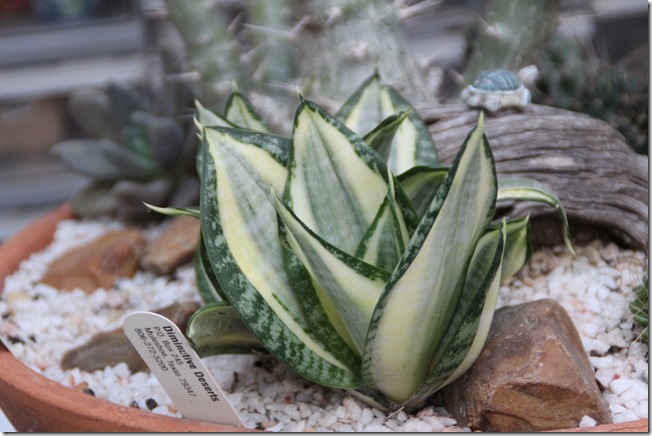 But I digress. I didn’t mean to dwell on sansevieria, but they do sometimes get abused because they are one succulent that can take less sun than some of the others and can be a reasonable choice for a houseplant. And I’ll admit it- I guess I was aggravated that someone got a byline with an article that didn’t get everything right.

Jade trees, of which there are many varieties, tend to reach for light, so you really have to make sure they get as much light as possible over the winter. And then don’t be scared to prune the leggy branches to make them more compact when they get to go outside when it warm weather comes back. Jade is of the crassula family, and some other crassula varieties will work. Kalanchoe blossfeldiana will do well and will bloom again if you deadhead them.

Echeverias tend to keep their shape if they get enough light. Haworthias, aloes, and gasterias would work inside. Ground cover sedums aren’t a good choice in my opinion, based on what I see them do in the barn. Trailing sedums like donkey tail do pretty well, but they do better in my greenhouse, which gets more constant sun. Graptoveria, pachyphytums, and pachyverias don’t always do as well inside. Cute little barrel cactus aren’t a good choice, either, because they will definitely lose their shape while searching for sun.

One succulent from Madagascar that actually does better in the low light is euphorbia decaryii. This is not your typical fleshy succulent, but euphorbias fall into the succulent category. Given too much direct bright sunshine the leaves turn bronze, which is not bad, but they are a much prettier dark green when when placed in shade. The little grassy bulbs in the front don’t like it inside. I need to take them out and let them be happy somewhere else. 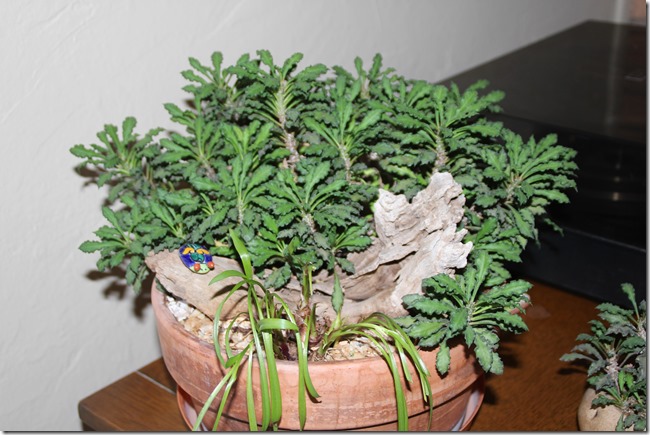 Another euphorbia that is popular and will do pretty well inside is euphorbia milii, commonly known as crown of thorns. It will bloom a while, stop for a while, and then bloom again. But it, too, will get leggy and top-heavy without enough light. Pruning it in the spring will make it grow back bushier. Just be aware it has a milky sap that makes a mess and could upset a stomach, so stick a piece of tissue over the wound to catch the drips. And if you want to root the cuttings, turn them upside down so they won’t bleed out and allow them to scab over before putting in dirt. 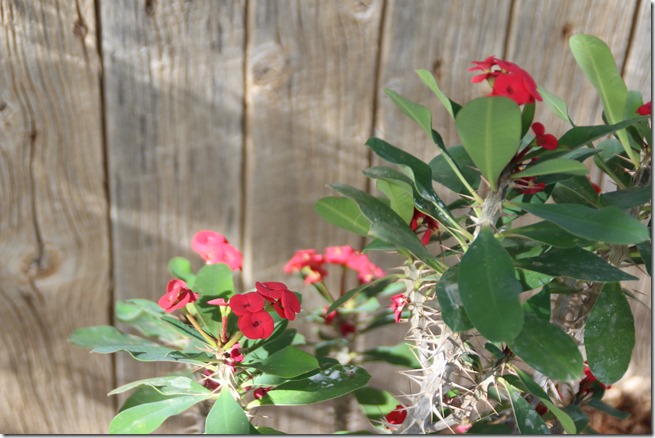 Some succulents will do well inside with less light, but contrary to what you may read, not all of them will, and the ones you do put inside can’t just be blithely ignored. So experiment, find ones that work for you and your accommodations, light being the main consideration. Careful selection and placement make all the difference in the world.

And when spring rolls around, put those babies outside in some filtered sunlight to give them time to readjust to the sun’s rays hitting them directly, prune if necessary, and they will thank you by putting on fat new growth.