Most Saturday mornings on Highway 84, just a stone’s throw away from the city limit sign on Muleshoe’s east side, the line forms in front of Muleshoe Livestock Auction, Inc., just as it has since 1955 when Clayton Myers embarked on a business venture that has become a staple in Muleshoe history. 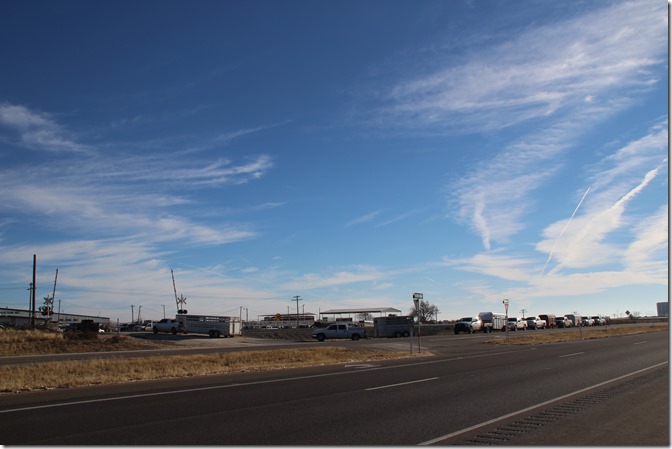 The picture above was taken two days ago; the picture below was taken in 2007 when I happened to catch the auction barn when nothing was going on. 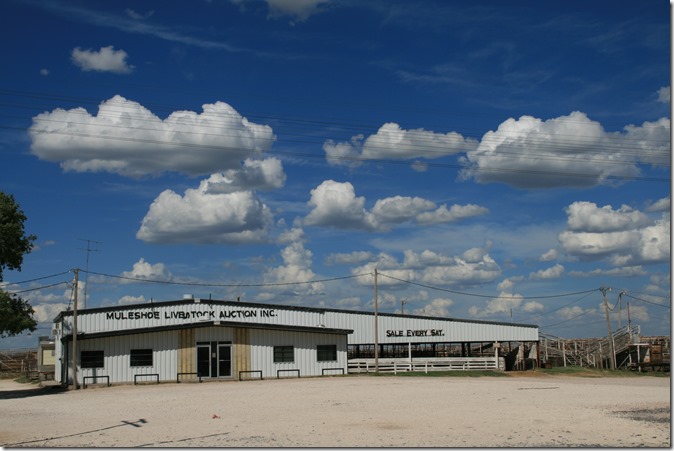 And below is a picture of how the original building looked in 1955 when it first opened. 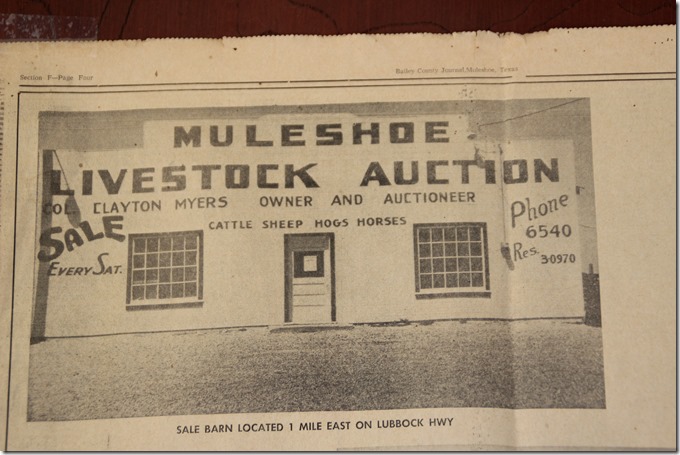 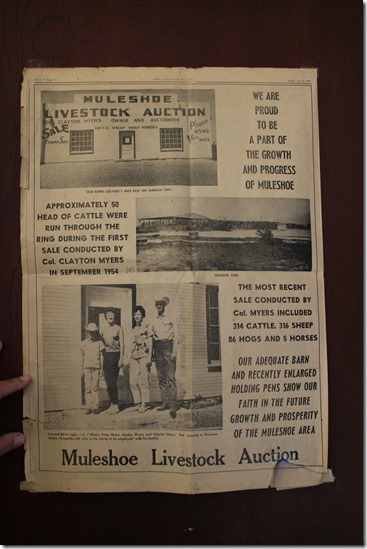 The newspaper ad states “We are proud to be a part of the growth and progress of Muleshoe,” and the Myers family and the livestock auction have made good on that statement for the past 61 years. This is how it all happened.

Clayton Myers, originally from Oklahoma, drove a coal truck, met and married Gladys Ballard, lived in Stegall, moved back to Oklahoma, but came back to Muleshoe after C.L. was born. Then in 1954 he leased and eventually bought an existing auction from a Mr. Wanser. This building was located about where the city barn on Highway 84 is now. In 1955 that building burned down, and Clayton moved down the highway and contracted with Herb Ramage and Ted Harrison to build the building pictured above where the auction is today.

Time passed, business was good, the building was enlarged, and the grand opening for the new and improved facility was held on December 17, 1966, the same building shown in the newspaper ad below and the picture I took in 2007 shown at the beginning of the story. 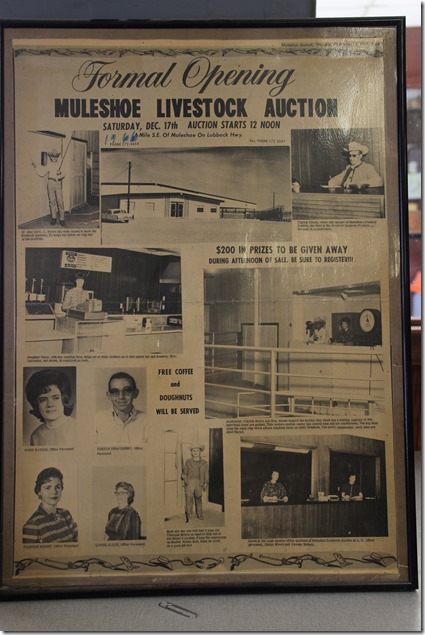 On Friday before the sale on Saturday, Thurman graciously took the time to talk to me about how it all started. Then Saturday before the auction kicked off,  C.L. filled in some empty blanks.  I have mentioned the auction barn that was on the highway, but there was another auction barn that dates back to the 1940s that was located in the area where the Lenau lumber yard used to be. Eventually this auction was the one moved to the highway. Dad Clayton worked there clerking, eventually leasing and later buying that business. And then the fire changed everything.

In 1953, Clayton had traveled to Ft. Smith, Arkansas, to become an auctioneer so he would be prepared to conduct the auctions to come. Note the designation of Colonel Clayton V. Myers on the certificate, an honorary title traditionally given to students who earned their auctioneering diploma. 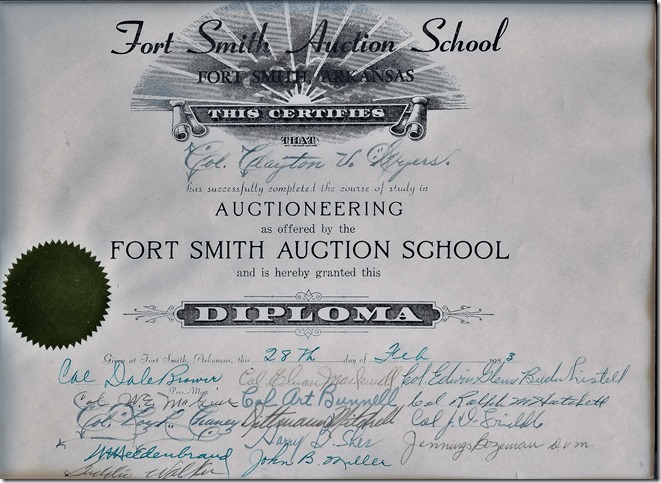 This is the auctioneering graduation class. Clayton is the tall, smiling man in the middle of the back row with that great tie. 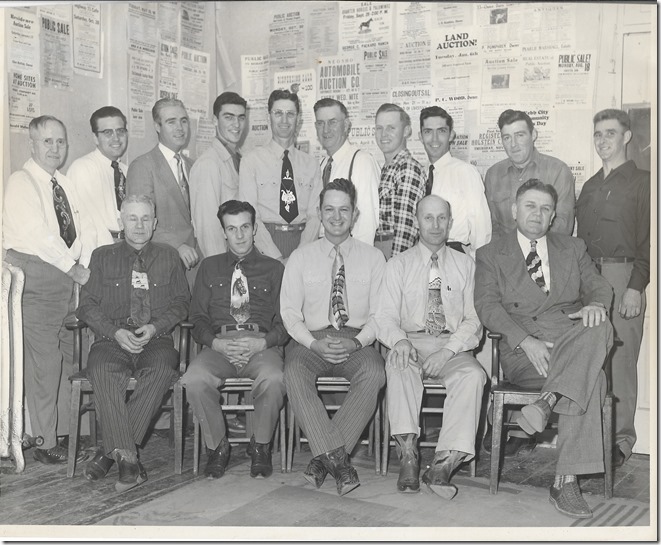 From the beginning, the business has been a family affair. Clayton and his wife Gladys had three children, Patsy, C.L., and Thurman. Gladys and all three worked every Saturday. When the children married, Patsy, C.L.’s wife Jamie, and Thurman’s wife Rhonda all worked at the auction barn.  When the grandkids came along, Patsy’s Brent, Brandon, Jill; C.L.’s Mandy and Clay; Thurman’s Jackson, Madison, Garrison, they were all there every Saturday as well. I suspect as great-grandkids come along and get old enough, many of them, too, will learn and help out at the sale barn. After a time, Patsy and her family moved away, Mandy, Madison, and Garrison all pursued other interests, and the rest of the family remained involved in the auction business. Shown on this 2013 calendar are, left to right: Clay Myers, C.L. Myers, Clayton Myers, and Thurman Myers. 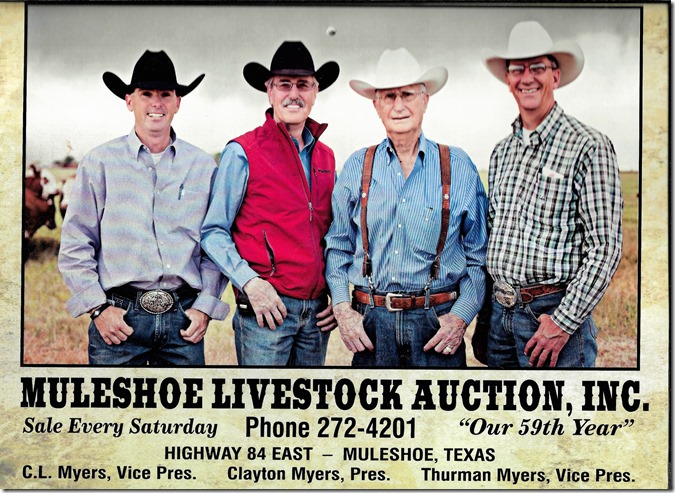 Thurman and Rhonda fell right into the routine as newly weds. For many years we could hear Rhonda’s voice at our house coming from the auction ring on Saturdays when the wind was blowing just right. She was the weighmaster. Now her job is working in the office dealing with the sellers and buyers, and knows just about all of them by name. Or number-that’s another story. 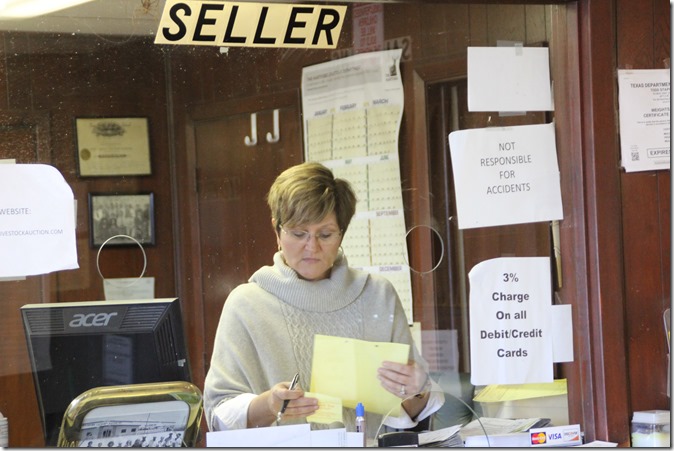 C.L.’s wife Jamie also works in the office. When I was there, she was handling the slips coming from the sale ring making sure the animals sold were documented to the correct sellers and buyers. Over the years, most of the buyers and sellers have become repeat customers. And over the years many of the same family names began to be used over and over, and it became increasingly harder to know one individual from the other just by name when looking at a ticket and not at the actual person. So numbers ending with a few letters were assigned to make sure who was who, everyone learned the numbers, and that’s how things are kept straight. 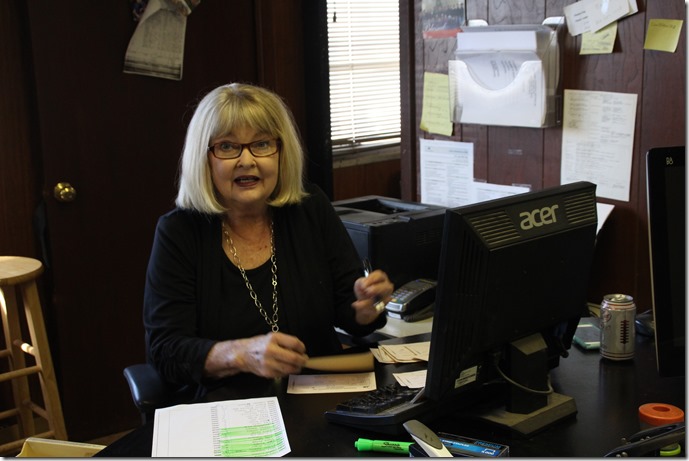 Thurman and Rhonda’s son Jackson works a variety of jobs and was taking a break from unloading incoming livestock when I managed a picture of him. Clay, pictured on the calendar, had already stepped out to take care of business in the pens. 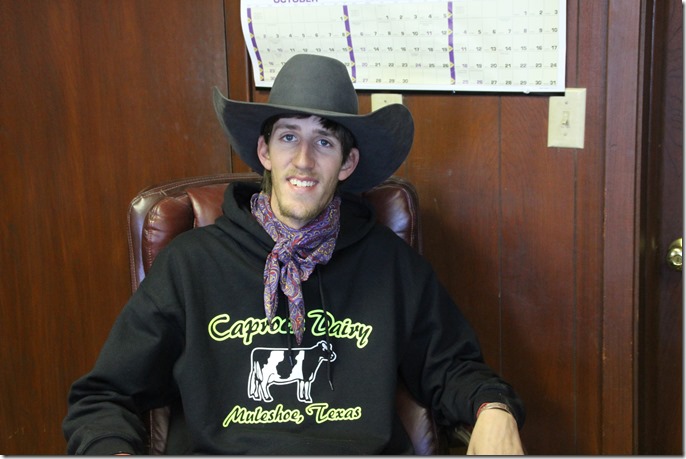 I had visited on Friday so I wouldn’t interrupt Thurman’s work and so I could take pictures and see things without getting in the way. 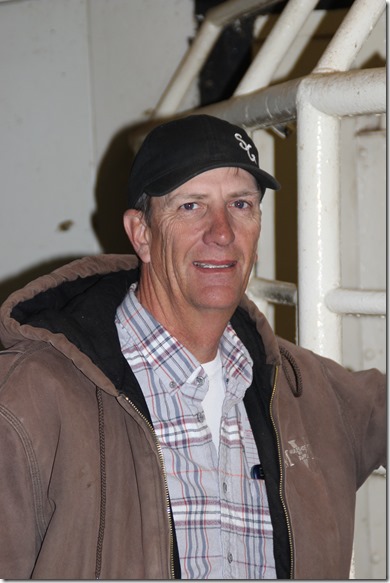 This catwalk allows viewing the pens from above, which allows the pen workers to see where they need to move the animals. Cattle are put in the pens on the north side of the catwalk when they come in and are moved to pens on the south side after they are bought. 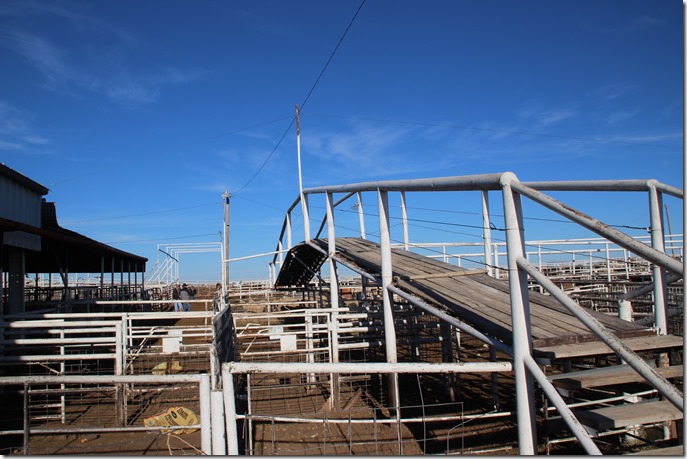 The picture below is looking to the west from the end of the pens, so the cattle are moved from right to left. And note the tumbleweed on the catwalk-a nice West Texas touch. 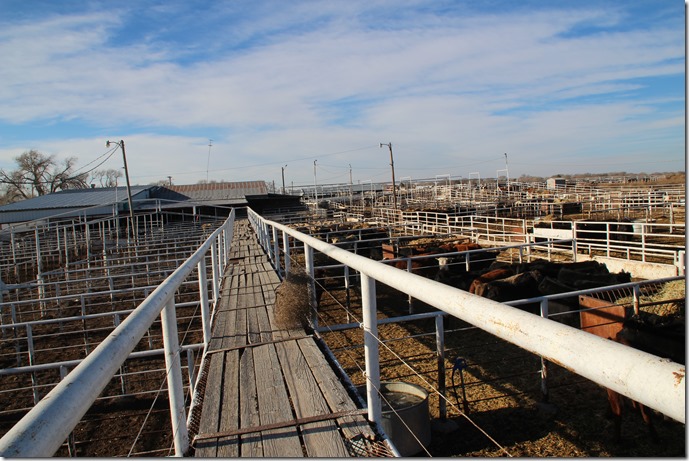 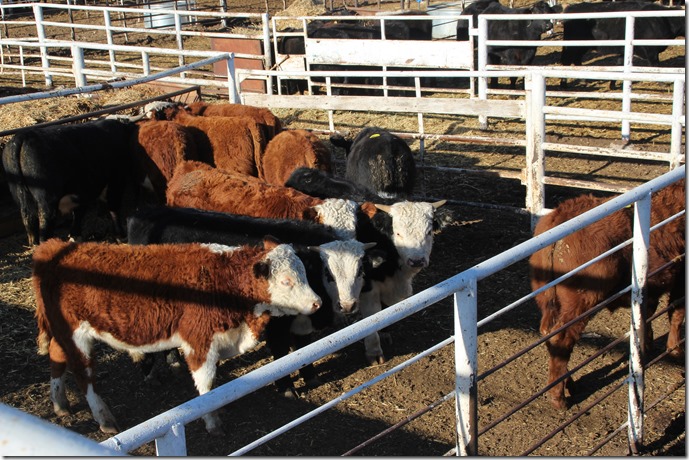 Hogs have their own pens, as do sheep and goats because they can slip through and escape the cattle pens. 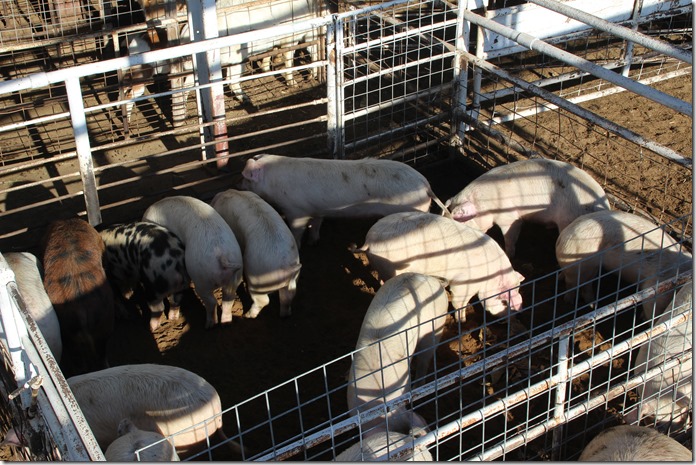 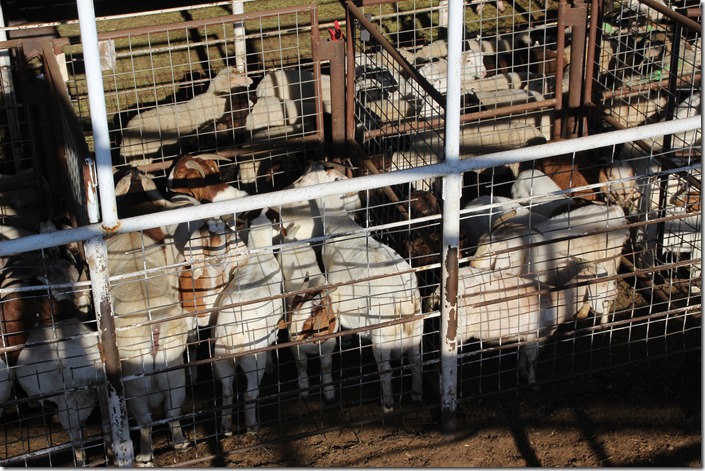 Thurman said they no longer handle horses because of pedigreed horse sales at other auction barns. I asked if they handle llamas, and he emphatically said No!-they are a pain, can’t be herded, no one wants them any more; that fad has passed. They do get an occasional donkey. He also said they are the only auction within a 500 mile radius that sells pigs because they meet the USDA requirements to handle them.

But, back to sale day-after I got into everyone’s way in the office, it was time for the auction to begin, so I went inside the auditorium to experience my first livestock auction. The padded seats were comfortable, but the rows were built deep, for long-legged cowboys, and I had to do some major climbing to navigate going up and down each row! 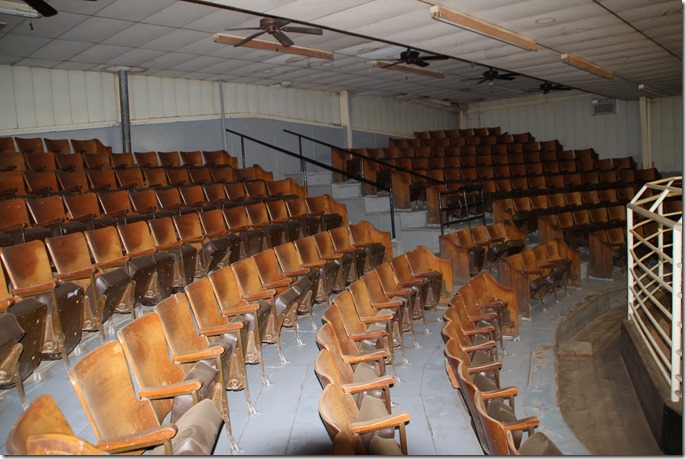 Seating capacity is 300, so this was not a full house. But I had picked a time of year that is slower than most, which is also why the line of trailers and pick-ups waiting on the highway was not as long as usual. Plenty of business for a full day, however, starting with the hog sale. Hogs go first, followed by sheep and goats. Then comes a 30-minute lunch break, after which comes the cattle sale, going from youngest to oldest followed by the dairy cattle at the end. Thurman said on a good day and depending on the season, 100 to 500 hogs run through the ring, 350-1000 head of sheep and goats, and 500-1500 head of cattle. The auction barn has had its ups and downs. Farming and ranching has changed.Thurman said back in the late 80s, early 90s, farmers used to run more cattle on winter wheat, buying and selling all the time. Then came the drought, kids leaving the family farm, and things slowed down a bit. But like all business cycles, things are picking up. Kids are coming back into the fold, weather is better, and dairies are creating a new niche of trade. The work day has always started at 7 am, and now winds down around 6-7 pm. In the old days when the line of trailers and trucks was so long you couldn’t see the end of it, the sale wasn’t over till 1,2, or even 3 in the morning. In fact, Thurman could remember at least three times when they watched the sun come up! And I suspect those days will be back. It’s just a matter of time. 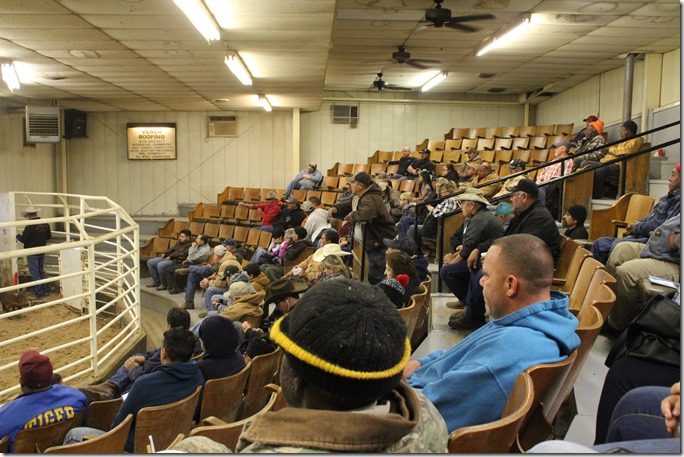 Except for major holiday weekends, the business is open seven days a week, and it only takes two to three people on premises to do the work during the week. On sale day it takes right at 30 to 32 people to run the whole operation. Most of the smaller animals, goats, sheep, hogs, go home the same day they are bought. The cattle are usually shipped out on Sunday or Monday when larger cattle trucks come for them, and the rest are gone by Tuesday. Wednesday the whole process begins again.

C.L. and Thurman attended the same school of auctioneering in Ft. Smith that their dad did, Jackson was trained in Wyoming, and Clay was self-taught, so they all are equipped to do the auctioneering and trade the duties in the ring. Today it was C.L’s turn. 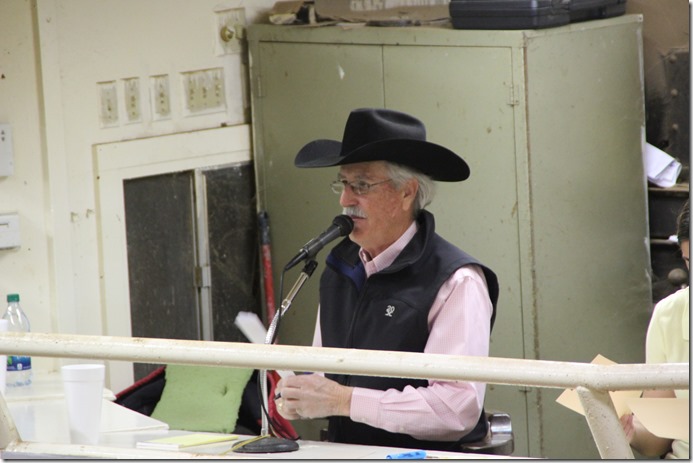 As I mentioned, this was the first livestock auction I had ever seen, and I was lost the whole time! I knew basically what was going on, but the animals were moved in and out of the ring before I could even tell they had been bought, and C.L. would refer to everything with numbers, and it just went really fast for me. In the ring and in the office I heard all kinds of jargon specific to livestock auctions easily understood by those who needed to understand. I knew sow and gilt, breed names and stuff like that, but the rest of it was a haze to me. It was interesting to watch and quite a methodical process. 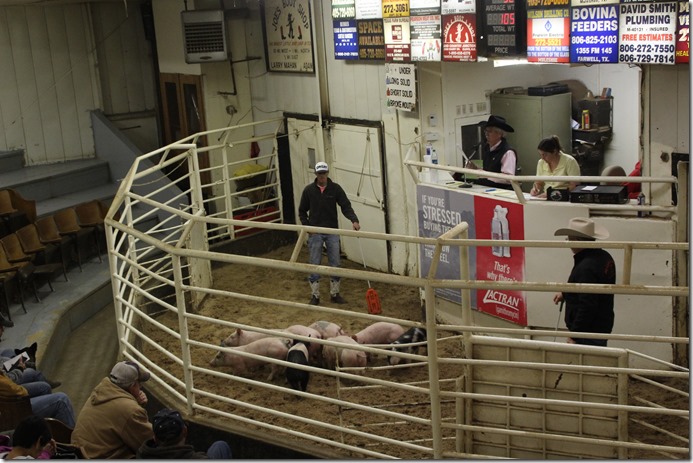 Many of the pen workers at the auction are high school boys looking for a part-time Saturday job. Our son, A.J., was one of them when he was in high school. When I told Bill about my visit  to the sale barn, he asked if Shorty was still there, Shorty being on the job when A.J. worked. So I asked and Jamie smiled and said, “Oh, my, yes, he’s like family. He was a pall bearer at Clayton’s funeral in 2015 and for Gladys in 2005, and will probably be one at my funeral!” So I was introduced to Carlos Martinez, who assured me he remembered A.J. and told me he had been there since October of 1982. I’d say that’s a pretty good indication that the Myers are a good bunch to work for. 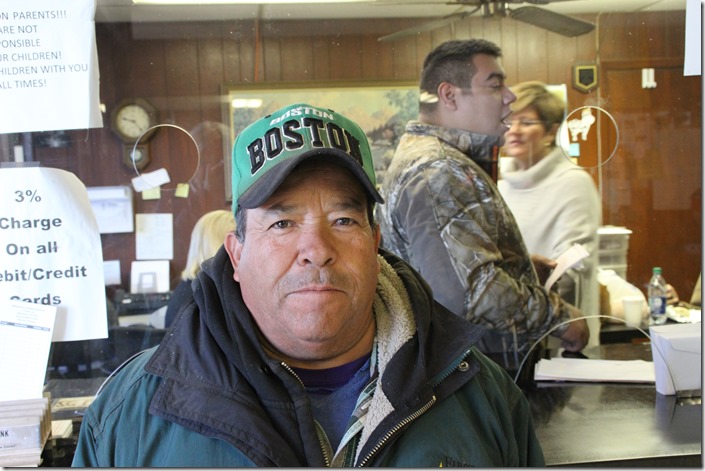 And if you need more proof, I’ll end with this. When Bill moved up here ahead of the kids and me to take his new job at the Federal Land Bank, he stayed briefly with his Uncle Leroy and Aunt Ruth Berggren in Bovina. Leroy was a farmer who ran cattle on his wheat pasture and would from time to time need to sell a head or two. When he did, he hauled them  to Muleshoe Livestock Auction. Bill asked him why there instead of some place perhaps closer. Leroy responded, “Well, I just feel good doing business with them. Clayton Myers is as honest as the day is long.”

My thanks to Thurman, C.L., Rhonda, Jamie, and everyone who shared the story of the sale barn with me.