Barrett Produce has been packing potatoes in Muleshoe since 1952, but the family business has been around much longer than that. The potato shed was thriving when we moved here in 1980, both of my kids worked there a couple of summers, and the business has become a Muleshoe institution, so I felt like it was about time I shared its history with you. 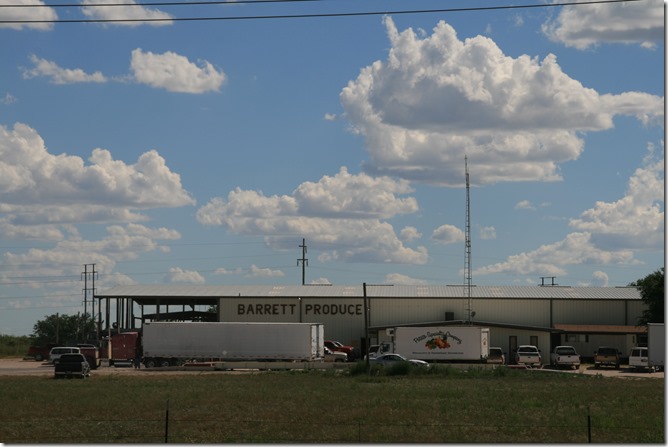 Current owner/president Richard Barrett graciously allowed me to interrupt his day for a history lesson and a tour through the facility. 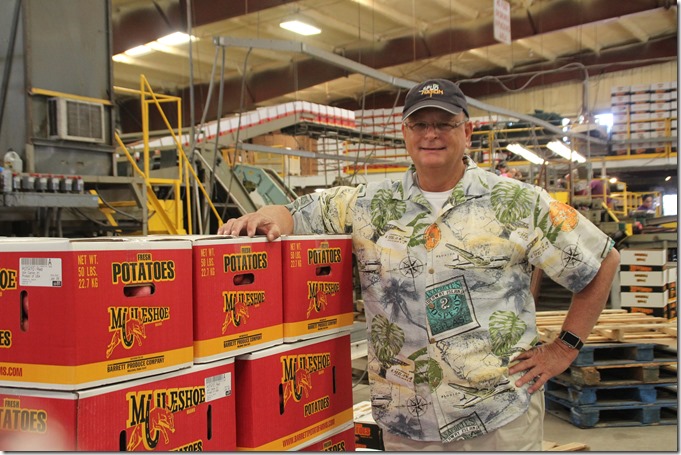 It all started in Idaho where his grandfather, Fred Barrett, grew potatoes in the 30s. Around 1940 he chanced to met some Texans from Hereford who convinced him he should be growing potatoes in West Texas where the soil is sandy and the climate arid, which are the conditions potatoes like. So the family of five brothers and three sisters moved with mom and dad to start the family business in Hereford. Richard’s dad, Dick Barrett, eventually ran the shed, and in 1952  dad Fred and sons Stan and Dick  started Barrett Produce in Muleshoe, and after a time, Stan became the sole owner. A son named Fred started a shed in Seminole, while another son, Frank, opened a shed in Springlake. The shed in Springlake is now run by Frank’s son, Bruce. Still keeping things in the Barrett family, Richard purchased the Muleshoe shed in 2001, and his son Keith is the general manager.

Part of the business is the farming of the potatoes which the Barretts still do, with Bruce, Jason Box, and Tim Gonzales cultivating 1400 acres of potatoes for both the Springlake and Muleshoe sheds. Stan’s son-in-law and part-owner Ken Box also raised potatoes for them in the 70s and 80s, and they also process some potatoes supplied by other local growers.

The potatoes grown by the Barretts are mostly reds, which we tend to call new potatoes, as well as some russets. In recent years they have also added whites and golds which Richard said are popular on the East Coast, especially in New York. He said chefs like to use golds to add color to the plate, as in a nice pile of gold mashed potatoes. Barrett potatoes go everywhere but west of Denver,  because Idaho, California, Arizona, and New Mexico all grow potatoes and supply the western area of the U.S.

Potatoes are planted early in the Spring and take 90 to 120 days to grow. The vine is killed and three weeks after that the potatoes are ready to harvest, which starts the end of June and runs through August. Richard said they plant 100 truckloads of potato seeds which come from North Dakota and Nebraska.

After the history lesson, we went into the shed where I watched potatoes go from the truck into the box for shipping. The shed is a noisy, busy place where 80 employees get things done during the harvest season. (Counting people in the office, Barrett Produce has a total work force of 100 people.)They had just begun digging the potatoes the week before I was there and will run through August before the season is over. 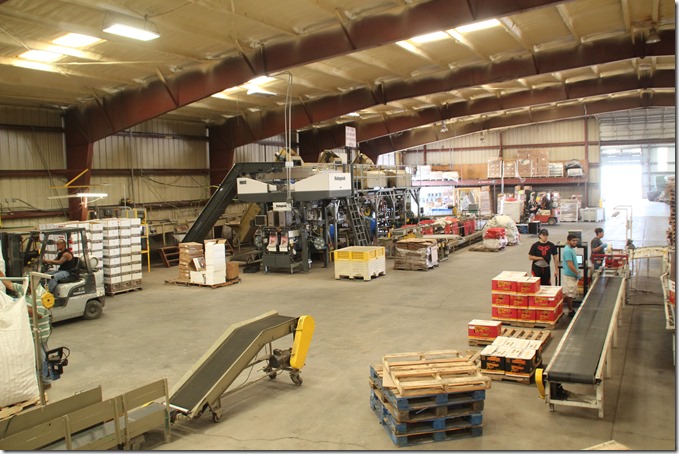 The potatoes first have to be washed free of the dirt, and this is where the sandy soil comes in handy because it is easier to wash off the potatoes than heavier dirt would be. The dirt that comes off the potatoes is a nice by-product, I might add, because when we built our house, we hauled potato dirt from the shed to our yard so we could grow nicer grass on the lawn.  And it worked. 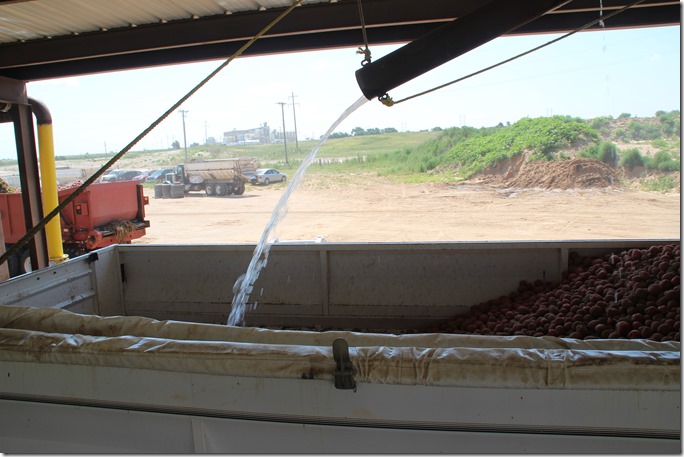 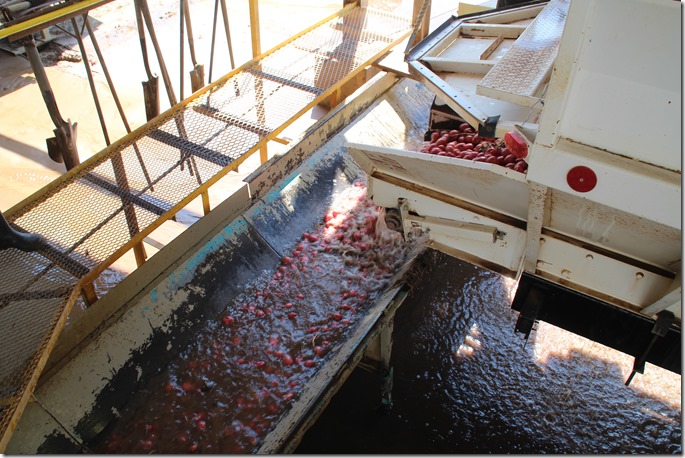 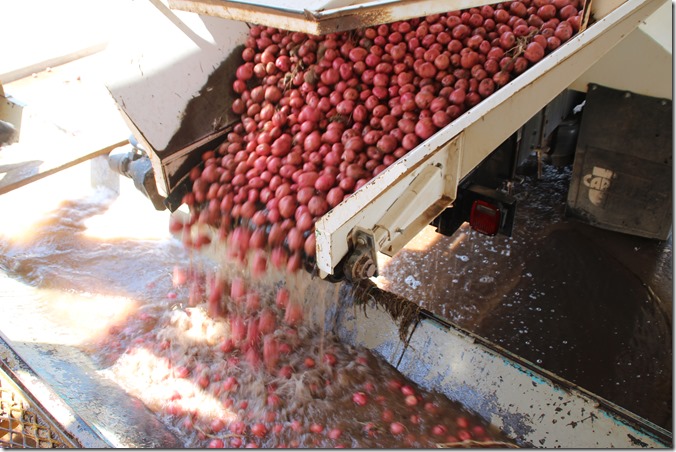 Potatoes go through a vine and dirt separator and then a conveyor belt carries them up to a large holding tank from which they  drop down into another washer and the dryer. 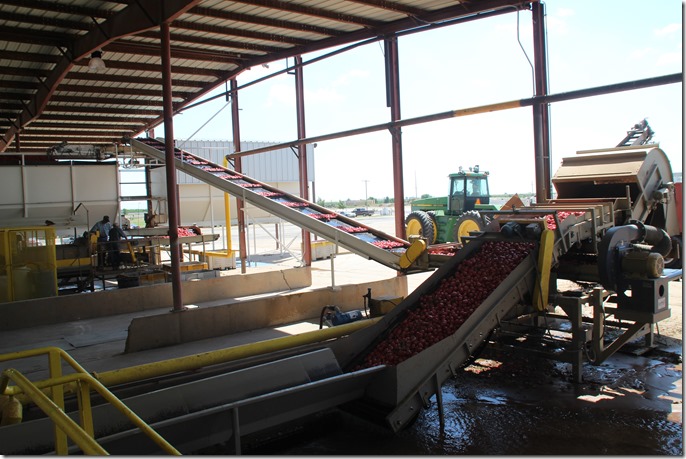 The potatoes go through a washer with wire brushes and then a set of sponge rollers to help dry them off. 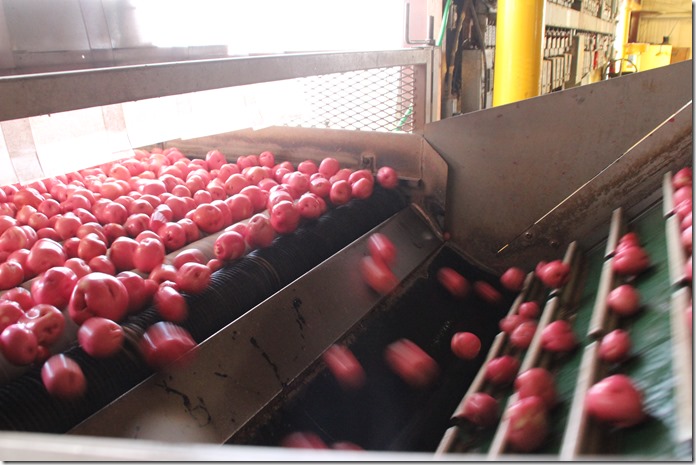 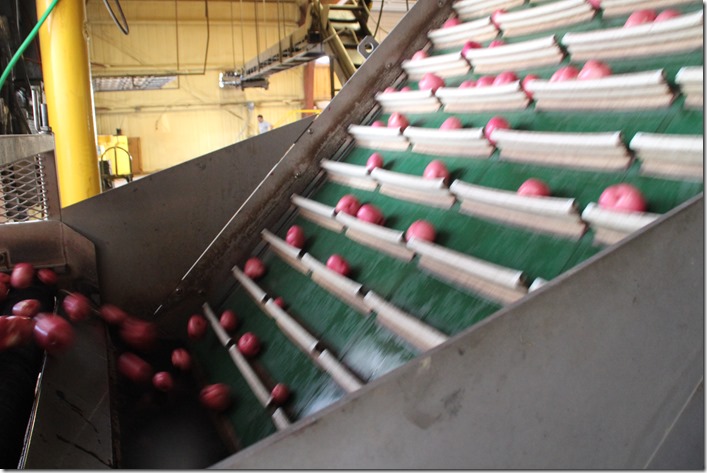 Next is an automatic grader which is made up of LED lights that magically separates the grades-ones, twos, and culls. The lights are in lines in front of the blue apparatus. I really couldn’t in the right angle for a good shot. Use your imagination. 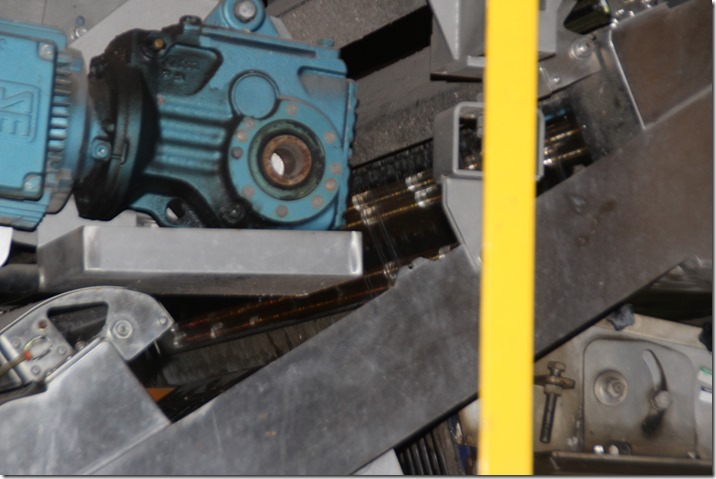 They are then carried up on belts to the workers who do the final inspection. 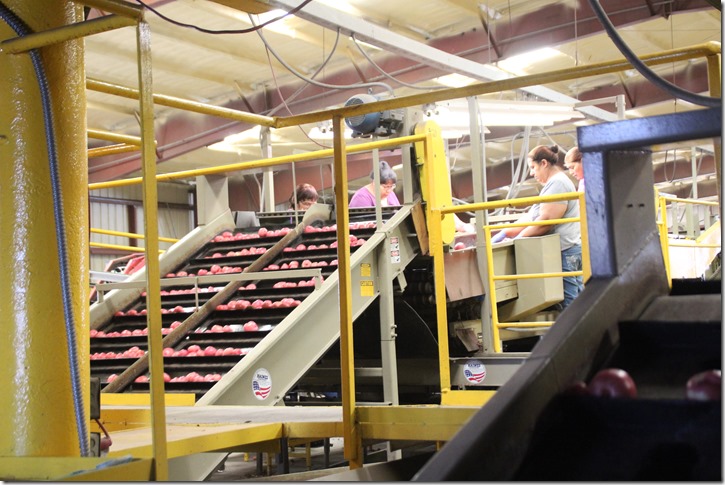 Then they fall down to the sorter which separates them by size. As they roll through those long rollers, the space between the rollers widens and the appropriate sizes fall through to the appropriate next belt. Creamers are the smallest, B’s are golf-ball size, A’s are tennis-ball to baseball size. 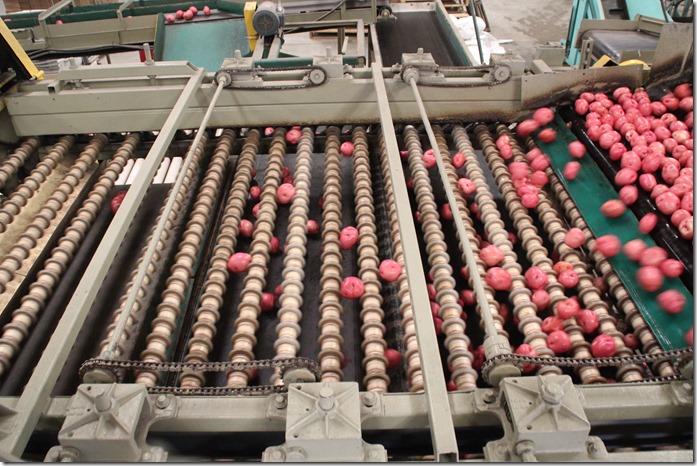 After the potatoes are grouped by size, they are sent to be put in the correct box. To keep down confusion, the boxes and poly bags are color-coded red or black for different sizes 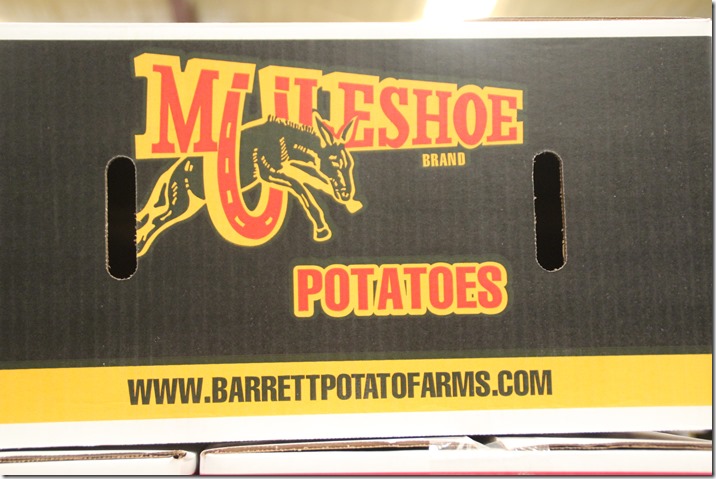 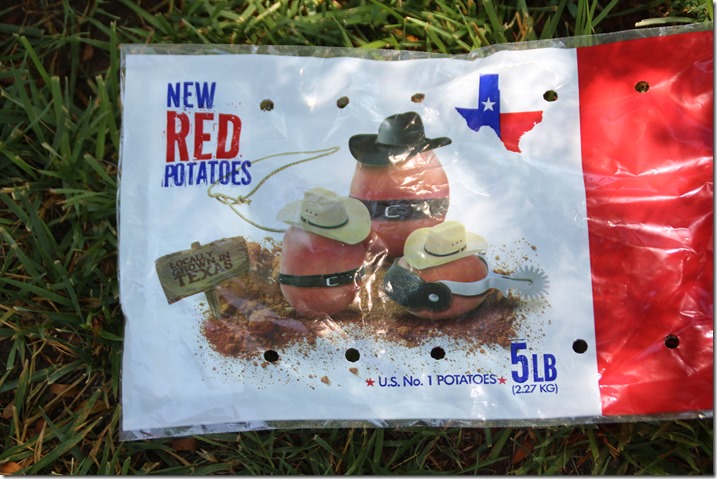 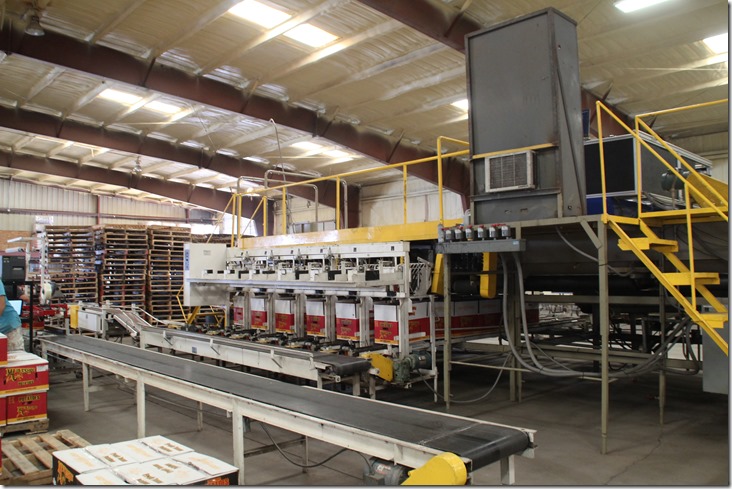 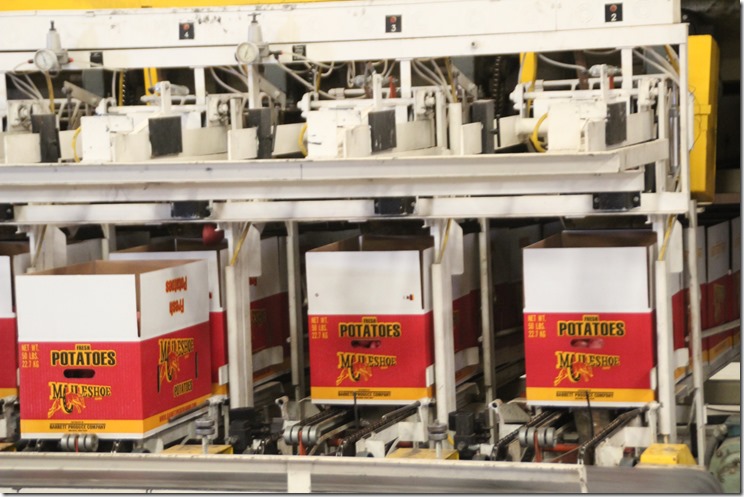 Once boxed, the potatoes go to the cold room  where they will stay until loaded onto trucks and shipped to their destinations. Ideally the cold room is set at 40 degrees, but in extremely hot weather might go up to 50, which is acceptable. The cold room is also sealed at the point where the trucks are loaded to keep out flies. 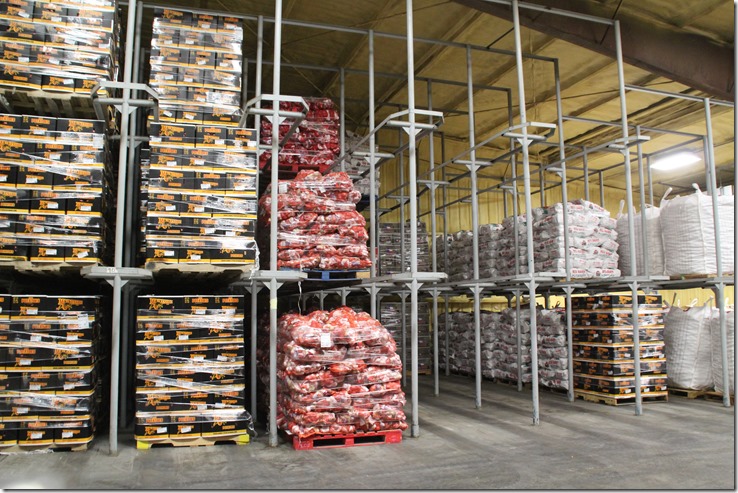 The cold room is also where bags of pinto beans are stored, a sideline started when Wal-Mart contacted Richard wanting beans. So Richard located pinto beans and has been supplying Wal-Mart since 1997. 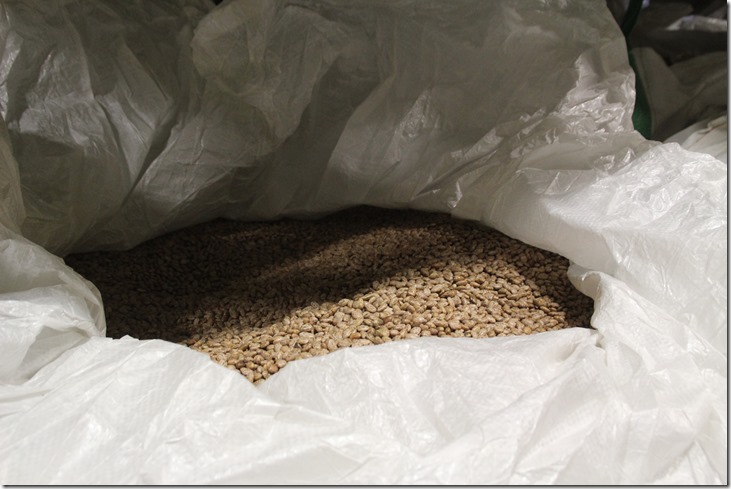 As many times as I have driven past this shed on Hwy 84, I never had the pleasure of seeing the action inside. I was glad I was given the opportunity to see what it takes to process the potatoes that I will enjoy that Richard shared with me as I left.

Now every time I eat  potatoes, I will remember them bouncing along on the conveyor belts, traveling to their final resting place in their boxes and my tour through Barrett Produce.

My thanks to Richard Barrett for sharing his time and allowing me to see the shed in action.