A Cautionary Tale About the Box of Family Pictures

Last week I drove to Graham, Texas, loaded with four boxes of pictures. You know, those boxes we all seem to have, the final resting place of ancient family pictures, early pictures of the current family, and odds and ends of family records that you don’t really know what to do with but aren’t quite willing to throw away. It’s all family history, after all, and your mother would kill you if you throw them away because she has held onto them all these years herself, not knowing exactly what to do with them, either.

I went to Graham to enlist the help of my aunt, Loreda Drum, who married Mother’s brother, my uncle Dick Drum. She is the last living member of that generation on Mother’s side of the family, at least the last one I know of. So it fell to her to help me out. Shown here at her 90th birthday party in 2011, she married into the family rather than being born a Drum, but she is still my last source of information. 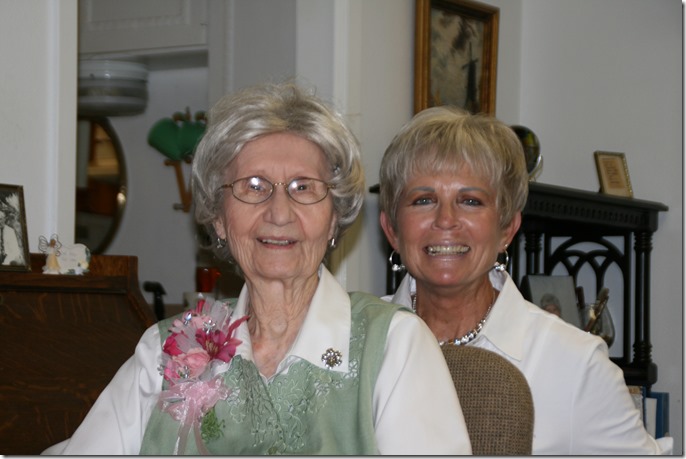 And help she did! She came to my rescue. I carted in those boxes, and we got right to it. For the rest of the afternoon and into the night we identified people in old, old pictures, remembered people in the more recent pictures, reminisced and shared memories till late in the night. And then we attempted to group and categorize all those pictures the next morning. We made it through all four boxes, and while we certainly didn’t try to count them, I’ll wager there had to be close to a thousand. Okay, maybe 500. But lots of pictures.

Like this one of my mother and her older sister Gladys. My sister Louise and I called her Sito; have no idea where we came up with that, another question that will go unanswered because all the people who would know are gone. Mother is the baby with Sito sitting in the back. This picture was not labeled, but it was easy to ID these two-we could recognize them. There is no date on it, and that would have been nice. But, see, in the future, or even now, I don’t think my kids would know it was their grandmother and their great-aunt in the picture. 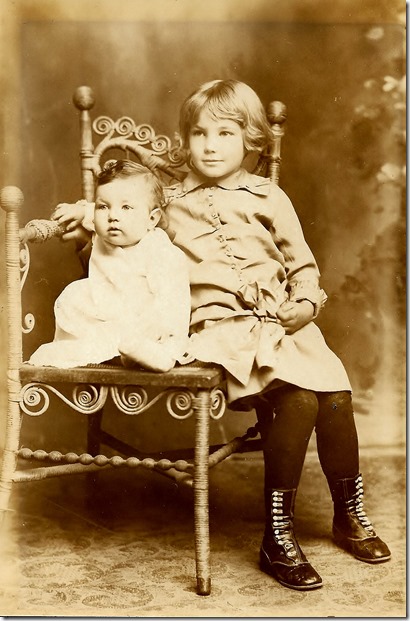 I had multiple copies of this one of my Grandmother Drum’s sister that everyone called Aunt Coon; again, no clue where that came from and without looking at some family tree or genealogical record I have no idea what her given name was. Their maiden name was Tate, Coon’s married name was Denison. That is her son Frank in her lap. One of the copies had been labeled, thank goodness, because Loreda wasn’t really sure who this was, and I certainly didn’t know. 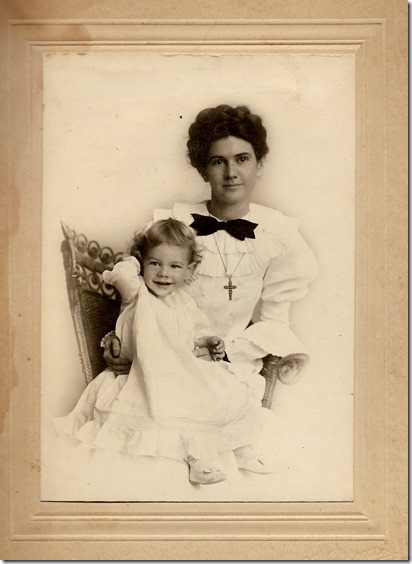 I knew right away who this was, Mother and Daddy. I also happen to know this is their wedding picture because I have that dress packed away somewhere in yet another box that I just don’t have the heart to throw away. And without looking for it, I can’t tell you their wedding date, other than it would have been in the 1930s. 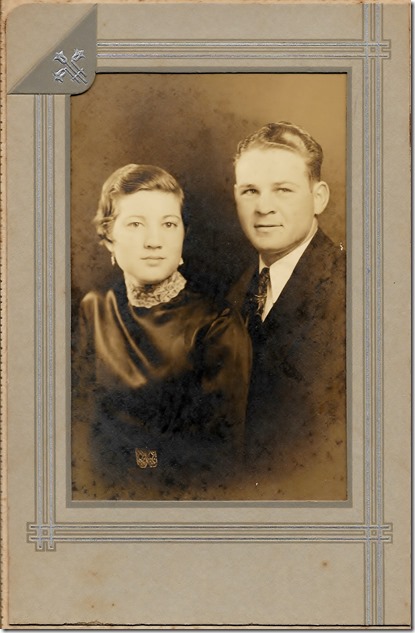 We were ruthless and threw away duplicates as well as pictures of people we couldn’t identify or make a good guess as to who they were. We also threw away pictures that were faded or blurred. After all, if you can’t see the face or tell something about the subject matter, why keep it? This one, however, I chose to keep just because I thought it was an interesting picture. Loreda thought it might be of a store that my Grandfather Drum and one of his brothers had. We don’t know where the store was or when the picture was taken because it was not labeled. We also couldn’t recognize anyone in the picture as being a family member. But it’s a neat picture. 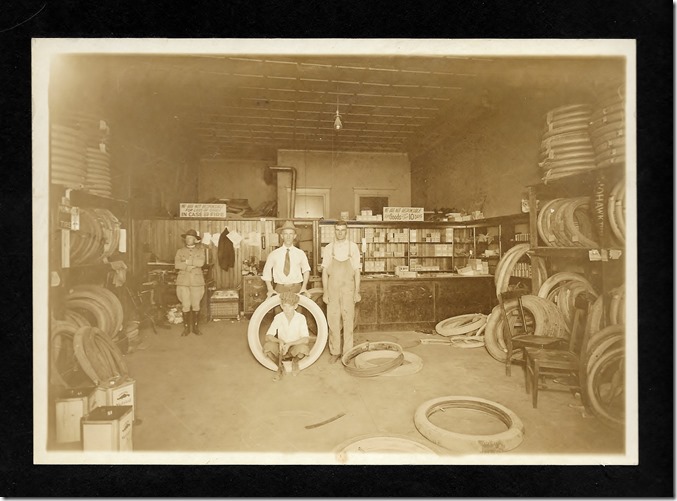 Those of you who know me might recognize my sister Louise and me in this picture. I’m the younger one. She died at the age of 16 from leukemia, so I don’t have her to share all the family history with. There was no date on this one, so I am guessing she was 7 or 8 and I was maybe 2 or 3 years old. 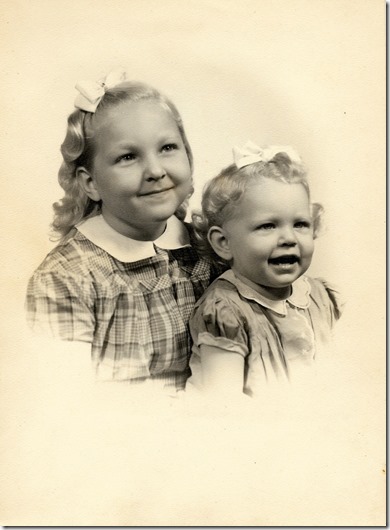 I don’t know who might have the big box of Liles family pictures, but I do know that no one is left of the older generation to tell about those pictures. We do have quite a few, but they don’t go back quite as far as the pictures of my family do. But of the ones we do have Bill can identify the people, and I have been adding information on the backs as we go. This one of Bill and his mother, however, was not dated, but I am guessing it would be around 1944 since Bill was born in 1943. 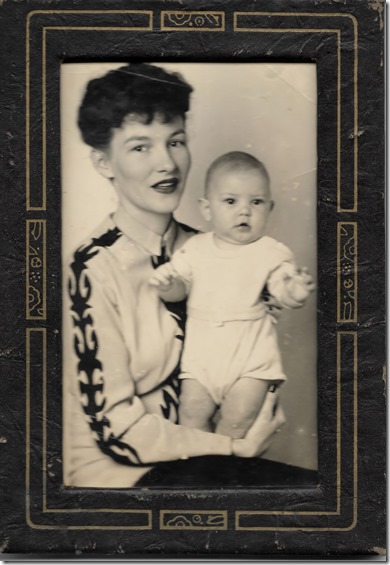 The other thing I like about the old pictures is seeing the change in dress and fashion and the way things used to be. Apparently it was customary in the early 1900s  to share pictures with family and friends by sending the picture as a postcard, because many of the pictures were postcard size and marked like a postcard on the back with a space for the address, stamp, and a message. This  would also supply the opportunity to write news about the family at the time, which some of the postcard pictures in the box did.

You actually may not have that ubiquitous box of old pictures, but I bet you will have a bunch of old school year pictures or family birthdays and weddings and such, and you think you will remember who all those people are and what school year that was.

But you won’t. Believe me. You won’t have a clue and at some point, I truly think you will want to know. It won’t be the end of the world if you don’t know, but it will bother you that you don’t know. And it will be frustrating to not be able to find out because you didn’t think to ask the people who would know when they were alive and would have enjoyed telling you.

So get out that marker and start marking! I would use a thin marker instead of a ball point pen so you won’t leave the impression of your writing on the good side of the picture. And pencils don’t always want to write on the back of photo paper. Add names, dates, locations, and events to pictures. Put the school year on the back of school pictures, starting with this coming year and then work your way back. And be diligent. I was pretty good at including information in my kids’ early years, but as time went on, alas, I know I grew lax. Caroline has always been very good about marking school pictures, and I am glad she includes the year on the back. But identify people in group pictures as well because, I promise, you won’t remember later who they all are. And your kids, when they look at those pictures years from now, won’t know who anyone is, either.

My grandchildren’s generation, and especially their children’s generation and on,  may not be blessed with the box of old pictures, thanks to computers and the digital age. They may have a box of picture discs, but I suspect most of their pictures will be up in a cloud or somewhere else in that black hole of the Internet where pictures go to be saved. Or on their phones. All of that may not make it as easy to label and identify the contents of the pictures, but I hope they will think about the future and do whatever it takes to record who’s in and what’s going on in their pictures. Images, I guess they will call them.

My next step now is go spend the day with Patsy Holt in Lubbock, who was married to Daddy’s nephew, my cousin Wayne Holt, and find out all about the Graves side of the family. Like Loreda, Patsy was not born a Graves, but she is my last connection to that generation of the Graves family.

And then the plan is to somehow get all these pictures and all that history into a family scrapbook so that some day my kids will have those family history questions answered, have those family members identified, and will have a book instead of a box to cart around every time they move. 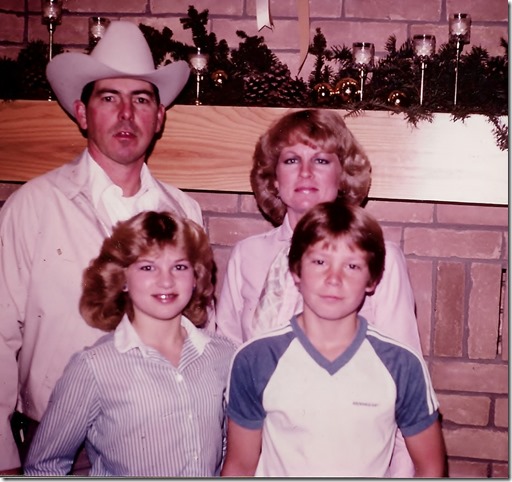 And yep-you guessed it- I didn’t put the date on this one! Sometime in the 80s?