Dewberry And Poison Ivy–The Vines That Keep On Giving

This was quite the weekend: a Farmers Market in Burnet, Maya’s birthday, Mother’s Day, and the ultimate I Told You So moment for Bill-my trip to the dewberry patch with Erin, Ben, and Frodo. 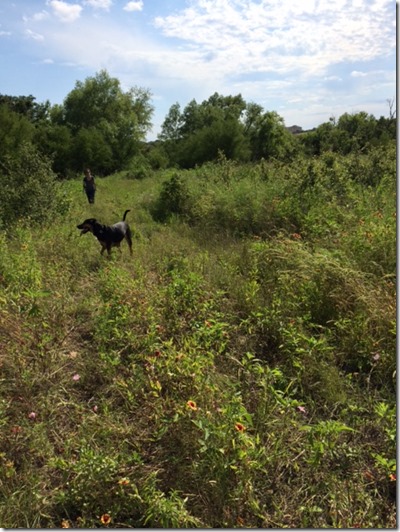 We drove down Friday to the Hill Country to be to Burnet bright and early Saturday morning for the Burnet Farmers Market sponsored by the Highland Lakes Master Gardeners Association to sell a few succulents. Which I did. Had a good day. 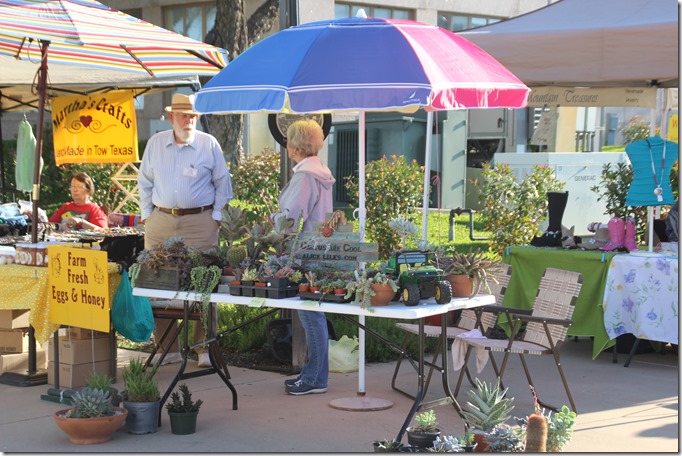 Then it was on to Kyle to celebrate Maya’s 14th birthday, which was also a good thing. Lots of presents, double chocolate cake, and dinner at Red Lobster, which also served as dinner for the two mothers who tagged along 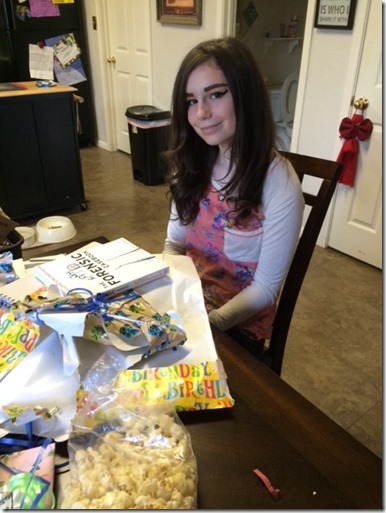 But before dinner, Erin and Ben wanted to show me the dewberry patch they discovered and see if we could pick some more berries. They had made one haul a couple of weeks ago and enjoyed a berry cobbler. So, in spite of Bill’s warnings, off we went. It was a pretty fair hike to get there. The first picture shows the approach to the patch. And when we got there, this is what we found. Lots of red, not quite ripe dewberries, 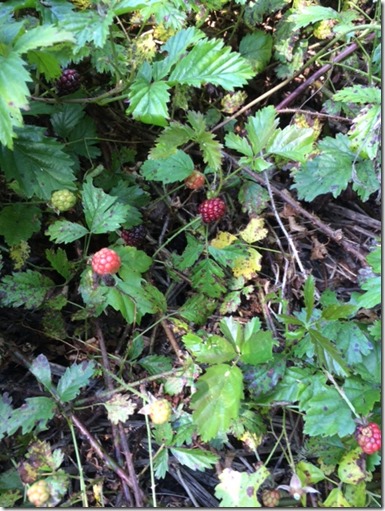 but also plenty of dark purple ripe berries. The trick is moving the vines to find the ripe ones underneath the foliage. 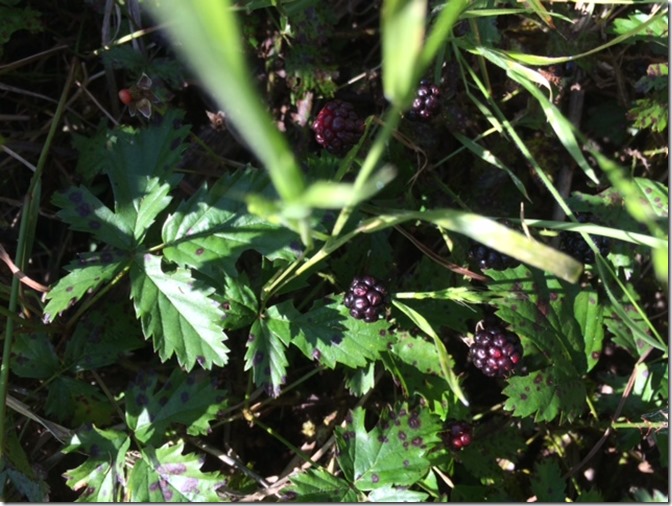 After our bag began to fill up, the stream down from the patch was inviting to Ben and Frodo, who by this time were hot and sticky from picking and chose to cool off in the water. Erin decided to join in as well. 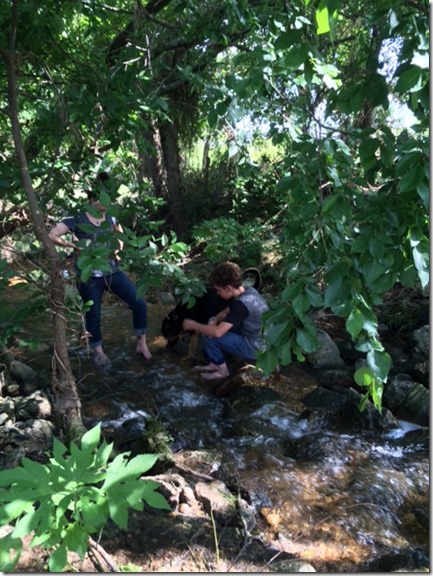 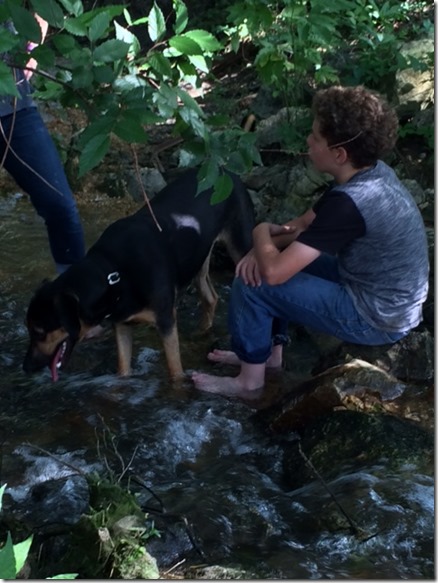 But I was on a mission and kept on uncovering ripe berries. And apparently in the process uncovered some poison ivy. Big surprise. They  tend to like the same conditions and usually if you find one, you can count on the other one being mixed in. And it is hard to distinguish one from the other in the mess of vines. To satisfy Bill, who knew I was highly allergic, I wore a long-sleeved shirt to protect my arms, but failed to consider the tops of my unprotected feet in tennis shoes. After leaving some red berries to ripen for the  next harvest., we made our way home. 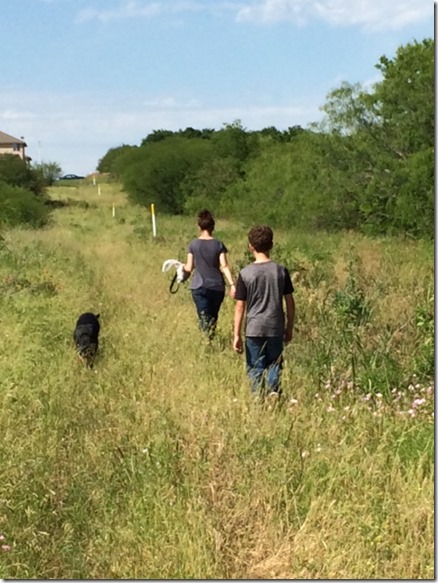 We made a pretty good haul, enough for a decent cobbler. The not quite ripe red berries offer a tartness and sugar has to be added anyway, so this was a good mix. 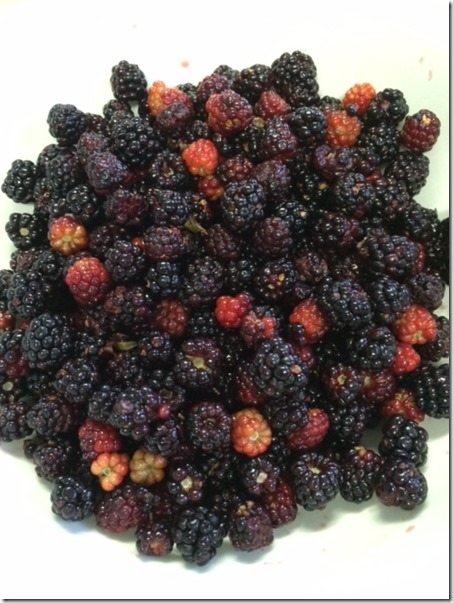 Then it was off to Red Lobster for supper, complete with a surprise chorus of happy birthday to Maya from the waiters. She wasn’t expecting it; we really didn’t order it, just mentioned it was her birthday. She was a good sport. I didn’t take a picture so I wouldn’t embarrass her.

We came home to the birthday cake and then it was time to go back to the lake so we could get an early start  the next morning. I told Bill my Mother’s Day present was to take wildflower pictures on the way home and hit some junk stores along the way. (Just for the record, he had also given me a gift before we left on the trip. Also just for the record, I had a gift waiting at home from daughter Caroline, with whom I did not get to celebrate the day. Oh, and then there were the flowers AJ and family had delivered that I left in the refrigerator so they would be in good shape for me to enjoy when we got back home. A long just for the record, but it’s my story.) The bluebonnets had their show, and now it was the red Indian blankets and yellow flowers turn. That’s another story, but here’s a sample. 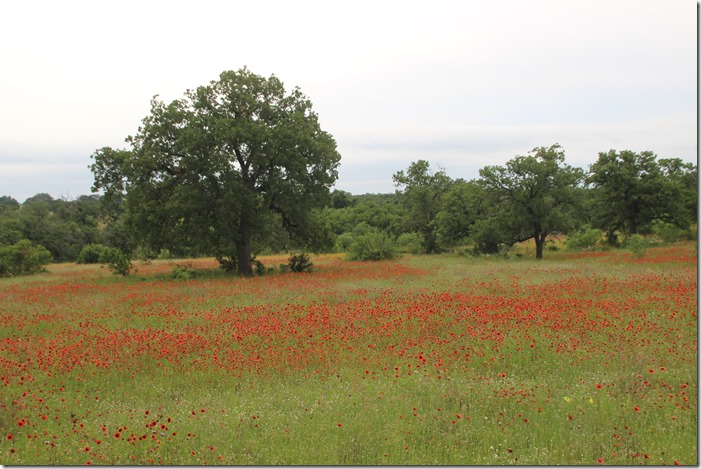 We stopped at three junk stores, two closed, but looked anyway, and bought a couple of things, one a real fun find, I thought. That’s another story, too. Check in next week.

By the time we pulled into Muleshoe, the poison ivy and the red bug bites were in full bloom and itching. Since this had happened before, I knew it would take about 24 hours for it to appear. The timing was right. The worst case I had was when we had been clearing out brush and weeds from AJ’s first house in the country in San Marcos. Again, by the time we arrived home, there was no doubt I was in trouble. My arms swelled up, and I looked like a grotesque body builder, sleeveless t-shirt and all. I couldn’t wear anything with sleeves and missed a full week of school. It was awful. Dr. Purdy loaded me down with steroid cream and pills and finally the itching stopped and the swelling went down.

Thank goodness I kept the meds and added a poison ivy soap scrub to get rid of the pesky oils from the plant when I got home this time. I used the cream on the red bug, aka chigger bites, but they are nothing compared to the poison ivy rash. But because I started treatment as soon as the rash appeared, the itching has been minimal, and I have survived. But I have had to put up with that I told you so coming from Bill.

I can’t wear my tennis shoes as they and the socks hit right where the rash is. I can’t wear jeans for the same reason. So it is flip flops and shorts. If you have ever had poison ivy, you can appreciate what I am dealing with. If not, consider yourself extremely lucky. I know you think I am stupid for getting into it again, but it blends in with the dewberries, and the dewberries are a real temptation. You know how it is, the teenage invincibility mindset takes over, and I am just sure poison ivy will not be around. But it always is.

But the real insult to injury is the fact that I didn’t even get to enjoy this cobbler Erin made of the berries! 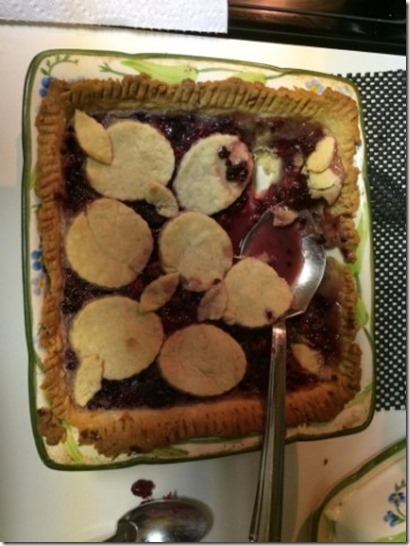 And then AJ had to rub in it and sent me a picture of his empty bowl- no doubt the helping I should have had! 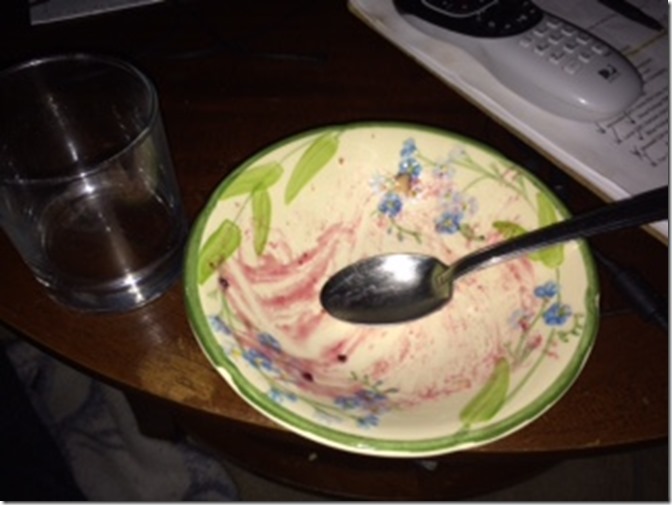 I’m sure when I was a kid I picked dewberries with Daddy and didn’t get poison ivy. As an adult it seemed to appear more often-off the fur of our cats when we lived in the country at Rosharon, after I shimmied down and back up a river bank in Edna. That time I didn’t miss school, but suffered with it on the backs of my legs and knees and had to improvise clothes and footwear to wear to work then. But after that encounter, I noticed that it is really easy to break out with it. I think I it sees me coming and just manages to drift in the wind and settle on my body somewhere.

Dewberries are a Texas and family tradition, but I guess I will have to let others pick them now. Blackberries just aren’t the same. Just ask my son, now all grown up, who used to go out, bucket in hand, and come back with a purple mouth and very few berries. And no poison ivy. 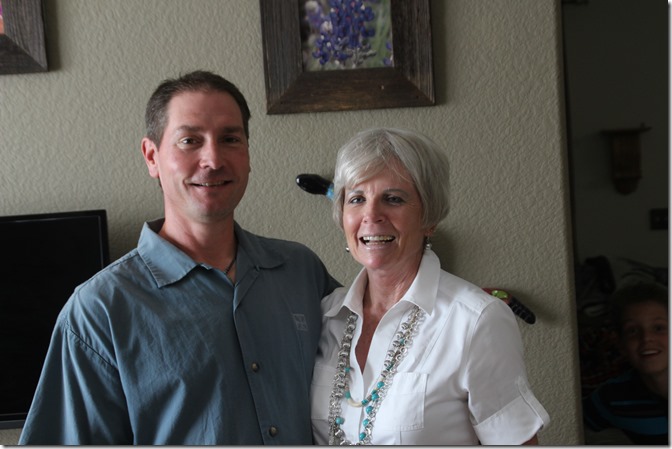 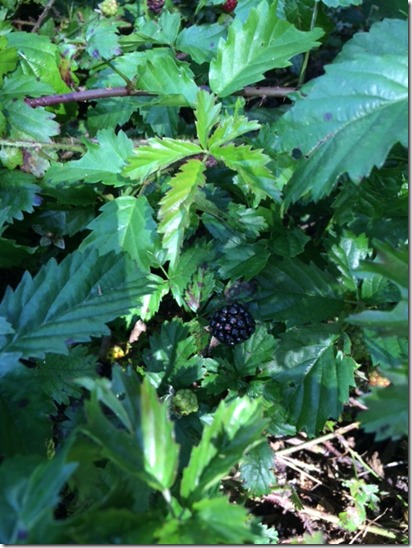